How To Cheat At Bonko

Classes have been moving long nicely and everyone seems to be having a good time making all the projects that you see posted here.  In fact, sometimes I think there's entirely too much laughing going on for me to call these classes work!

So here's Terry's Pelican window complete and ready to go.  By her own choice Terry utilized a trick of mine when it comes to choosing colors-- border your window with a glass that you've already used but make sure it's a color that isn't featured prominently.  Look at Terry's leaves and then her border.  Yep, they're one and the same.  And doesn't it make the border tie into the window all the more?  So when you're stuck trying to pick out a border color remember to look within your window for ideas. 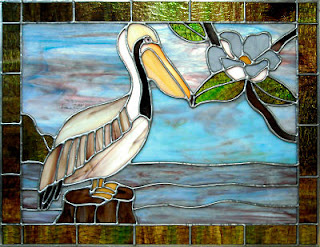 This past week we also saw Cindy's Tribute Window become a finished project.  Little Rye will forever be immortalized this stained glass testimonial that I'm sure his parents will treasure forever.  It's a wonderful panel but it's certainly a tragedy that it was to be made.  Great job Cindy, you've certainly put your talents to good use. Next we have the first of two of Susan's latest offerings.  The first being her new Flowerpot Lawn Ornament.  It's the same design as the last one but this one is realized in different colors.  This is a very popular design for Susan and she's really good at knocking these out now.  Practice makes perfect! 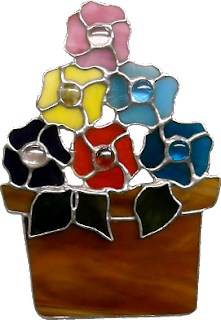 And this is the second project that Susan completed this week.  And it's another one that she can make with her eyes just about closed.  At first glance you'd think that it's another of her business card holders but that's where you'd be wrong.  She has adjusted the height and width so that it will accommodate an iPhone in landscape mode while allowing the headphone jack to be accessible.  It was a simple yet functional change that Susan handled perfectly. 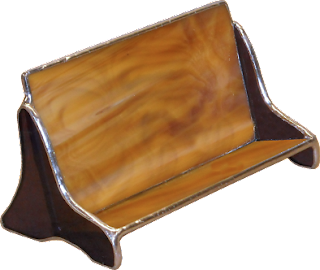 Brenda has her mallard window completely cut, ground and wrapped.  And the center is tacked together AND soldered.  She came in, picked out her border glass and got that all cut, ground and wrapped as well.  She'll tack the border to it and then solder up the back side while at home this week so it will be completed when she returns. 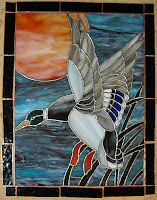 Donna came in with an Angel on her mind and by the time she left she had only 4 pieces left to grind before she could wrap this and finish it off.  This looks like a 2 class project to me because Donna has certainly made short work of it since it's almost completed already.

Bonnie's started another Vigil Candle Holder but she's changed both the color and the design.  This one is made out of a deep, red granite glass that is as rich and vibrant as the dark blue glass she used on her last candle holder.  Instead of an initial as the center piece Bonnie had decided to decorate this one with a clear cross. With the bottom already assembled she'll be working on the top when she comes back in.

Jane surprised me when she brought the center fish portion of this window in  completely tacked together.  She brought in 2 different glasses for possible use as backgrounds but neither of them really did the trick.  After MUCH hunting we stumbled upon this off-green clear glass that everyone agreed was the way to go.  Once it was cut and fitted around the fish she added a green border and took her window home to solder.  Look to see this one completed during her next class.

Lynn brought her Seahorse Window in and the Seahorse and the leaves was almost ready to be tacked together.  She had a few quick questions about how things looked but she was fine with what she accomplished at home.  After spending a few minutes foiling a few remaining pieces she tacked them together and then cut out her background.  As you can see, the main subject of the window has been completed so she'll be cutting out the rest of the background when she returns again for class next week.

After finishing both her Flower Pot Lawn Ornament and her iPhone Holder, Susan resumed working on her latest Fleur De Lis Window.  She's got her gloves cut out and will next start on the 3 layer Fleur De Lis imprinted on the gloves. 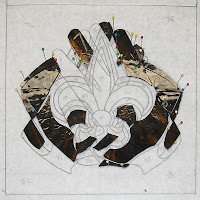 Myrt has only 5 pieces left to grind and these balloons will be ready to be foiled so they can be tacked together with lead.  Something that I hadn't realized is that she based her balloon colors on the four seasons.  That means there's a method to Myrt's madness!  All I know for sure is that she's going to need to pick out some glass to use for her sky very shortly... 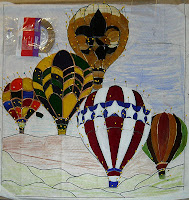 Shelly finished cutting the remaining pieces of her Woman In A Tub Window and then moved onto the grinding process when that was completed.  She's only just begun to grind the lower right floor pieces but she'll pick up where she stopped when she returns next week.  Green's the theme and this window is going to look great when it's completed--  Mark my words. 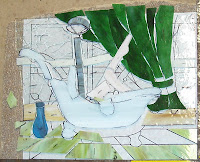 Terry's second project this week is this gorgeous Magnolia Window.  Her background glass pulls in color from the flowers and leaves making it a perfect match.  There's nothing wrong with using a blue background for flowers but doesn't a subtle but slightly unorthodox choice like this really make Terry's window stand out?  I'd say YES! 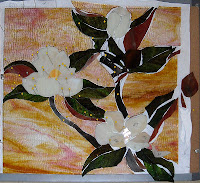 And I've said it before but I'm going to say it again:  Tim is really kicking butt while working at home.  He's not only got these two Tiger Eye panels completely tacked together but he also has the 2 LSU panels all cut out and ready to grind.  What you are looking at below is half of 2 windows (which may not  make much sense until you see them next week).  I'd show you the LSU sections but I didn't get a picture of them.

Now let's update everyone on the open positions in our stained glass classes.  Well, to put it simply and bluntly, there aren't any openings.  Our classes are filled to the maximum right now and we've had to begin a waiting list for people to come in and join our sessions.  If you're reading this and are interested in become part of of classes please don't put it off.  You want to get on the list so that you'll be called when an opening appears.  Classes run Tuesday, Wednesday or Thursday evenings and we also have a day class from 10 until 1 on Wednesdays.  And trust me when I say that we are productive AND fun! 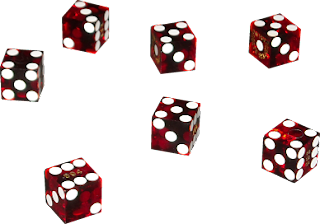