Put your Sunglasses On

I've been stressing good soldering a lot lately and it's been paying off in spades here.  All of our students have shown great strides in achieving perfect solder lines and there's marked improvement in everyone's work in general. It's always nice to see a student finish something that doesn't require excessive touch ups and I know it makes our students feel proud!  With that said let's look at what everyone has been doing.

Mary Grace has put the finishing touches on her Flowers/Humming Bird Window so it's left the shop never to return again.  After she made the circular insert with the bird and flowers she told me that she wanted to use bevels as a border so we laid them out,  measured the inside edge and cut the yellow glass to fit in the opening.  Since bevels only come in certain sizes you always have to adjust the size of your center to fit whatever opening your bevels create.  Mary Grace, luckily, mentioned bevels in time to adjust her pattern by adding and extra inch and a half to the height and width.  And it all came together making this window look GREAT! 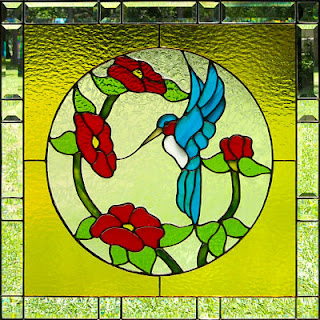 We also saw Betty complete her latest Angel window and as always, it's a real show stopper.  She soldered this at home and I have to say that it didn't take me but a minute or two to touch up a few rough joints here and there (basically on the back where it's harder to solder). Betty's soldering is coming along nicely and she's making project after project to make sure she doesn't forget anything that she's learned. 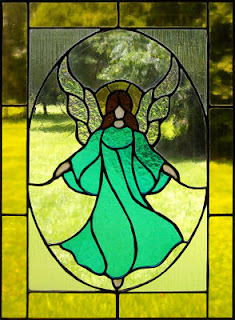 Brenda came in with her Purple Cross Window completed save for some hooks to hang it by.  I've been dwelling on soldering lately and I want to mention that I think Brenda's soldering is showing great improvement with each passing project.  I think our students are understanding that moving slower with your soldering iron is the key to a very even and clean application of solder. And this window proves it! 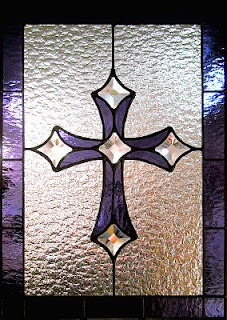 Martha didn't manage to solder her window while she was at home during the week but as I suspected, she managed to completed it during class anyway.  And I'm talking about soldering both the front AND the back of her window!  She had a few difficulties on the second side but that was only because she picked a very bumpy glass for her background which makes the soldering tougher than normal.  But, as you can see, that didn't stop her window from coming out picture perfect! 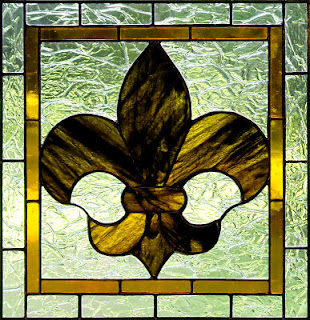 Terry had two completed windows this week and this is the first of her completed set.  She decided to make a beveled cross of her own using five diamond bevels which worked out perfectly.  I'm always impressed at the way Terry will take a basic idea and then run with it making it her own. 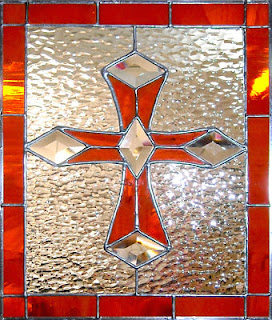 Terry's second window was a Fleur De Lis that incorporates some of the same glass that Martha used in her FDL window.   Terry went with a different interpretation of the Fleur De Lis but the end result is always the same-- a stunning window. 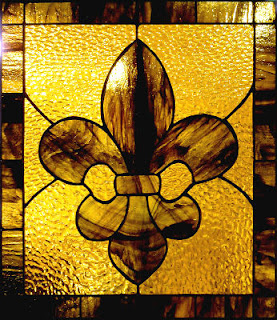 Not content with just having two completed windows Terry also worked on yet another variation of a Fleur De Lis as well.  This one is amber trimmed with a translucent black glass for some added drama.  It's hard to see right now since the pieces are in the process of being ground but just wait until you see this next week!
. 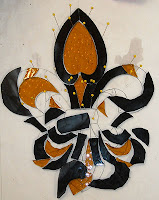 Look out because here we go!  This week we take a good hard look at the lamp that Bonnie is making and it's no longer just a jumble of pieces.   What you're seeing is one third of her lamp which will be repeated 2 more times to make the complete lamp.  Every last piece has been cut, ground and wrapped and Bonnie now has all the pieces in place so they'll transfer quickly onto the mold.  This is a project I'm really anxious to see completed!

It appears that Fleur De Lis' are back in fashion again because what we have here is a look at the window that Ann started (and nearly completed) this week.  The only thing left for her to do is solder it which is what Ann plans on doing when she comes in for her next class.  I don't see anything preventing this from being a completed project next week! 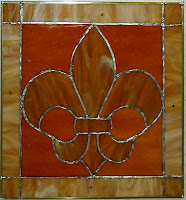 Susan's newest project is our second lamp this week.  This one is a panel lamp and she's already made a lot of progress on it.  The pieces of wooden yardstick have been nailed into a wood board to form a template that she'll construct each of the the four sides of the lamp in.  This will ensure that the angles of each section are all identical so that they line up perfectly when the four panels become one lamp.  And judging by Susan's cutting I'd say that this is going to fit together wonderfully because what you're looking at hasn't even been ground yet!  And that's the benefit of cutting off your lines while you are cutting your glass pieces. 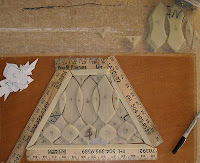 Shelley's Dog Window is amazing me more and more each week.  With just the ground surrounding the water, and the dog itself left to grind I'm saying that this is a project that Shelley can certainly be proud of already.  We're not exactly sure how she's going to do the face but we're leaning towards painting the eyes on the glass since they're just too small to cut.  We're a 'fly-by-the-seat-of-our-pants' kinda operation here at times but as they say, 'Necessity is the mother of invention' which is just a more verbose way of saying that 'We Always Manage.' 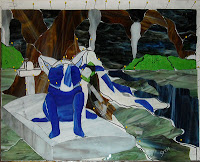 Betty resumed working on her Fleur De Lis Window by tacking it all together and then added two borders. You might recall that the original pattern only had one border but that doesn't stop us from adding as many as we want at any given time.  I think the double border  makes the window look rather classy myself.  And I have to point out how perfectly Betty's diagonal cuts line up-- they're perfect!  That is the most important step to make this window look correct and Betty has most certainly done it. 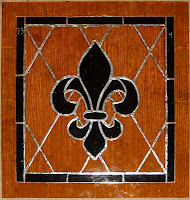 Brenda is certainly on a roll with her beveled cross windows.  This is a look at her second pass on this particular variation.  She's using blue glass for the cross and maybe even possibly the border but we'll know for sure when she returns next week to finish this up.

Cindy has just blown my socks off with the workmanship she's showing in this window.  Not only is she moving quickly but she's also managed to achieve absolute perfection with her cutting and grinding.  There's not a single piece out of place here  and I couldn't possibly do a better job myself.  Nice work, Cindy!

And speaking of nice work, Linda's Vegetable Window is more than just 'coming along'.  Her pieces all fit together wonderfully, her colors are spot on and it's a sure bet that the lion's share of the work on this window is well behind her now.   When this is finished it's going to make the Faux-Glass panel that she had in the opening look downright bad!  And I don't think it's going to be too much longer before this is finished.

And Mary has done some marvelous work this week as well.  Her Stained Glass Angel is almost completely wrapped which means that she'll either be soldering this or already have it soldered when she comes back to class.  I was most impressed with Mary's cutting last week.  the toughest part of this will be soldering around the outside edge, but it's like riding a bike-- one you do it there's no way to forget how to do it.  Just wait until you see this all lit up (possibly next week!)

Myrt has a sky!  Or rather her Hot Air Balloons have a sky.  Everything is now tacked together and she spent the last portion of her night with us trying to pick out the perfect color for her border.  We've gone through scads of glass and think that the answer lies in a light, honey amber glass that matches the Fleur De Lis balloon.  Since all this needs is a border I can safely say that Myrt will be soldering this shortly! 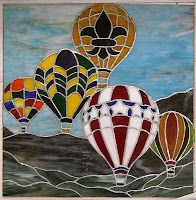 We're going to sign off with a look at Mary Grace's second project with us.  This is a flower that she cut out that will form the top lid of a box that she started this week.  With the flower cut out and ground I'd say that she'll easily have the top lid completed when she returns to class in 3 weeks after she gets back from her vacation in Alaska (yep, I'm jealous)! 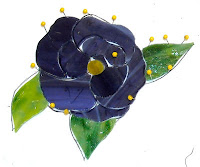 Wow, we have full classes all throughout the week and it makes for a lot of picture editing and writing once our classes are over.  I've been doing a decent job keeping things up to date lately  and with this many students (18!) I'd best not fall behind for fear of never catching back up!  LOL
Paul
Bayou Salé GlassWorks

Posted by Bayou Salé GlassWorks at 10:43 AM