The Garden Club Has Abducted Myrt!

Something I've been hearing a lot in class are questions like these:  "Is it ok to make a Fleur De Lis using amber glass?", "Can I use this glass as a background?" and "Can you have a red flower next  to a yellow one?"  My favorite question, however, is "Should I use this glass or that one, which looks good to you?"   Rest assured that by and large there is no right and wrong when it comes to picking colors.  It's a personal choice and as I always say, "Don't make a window to hang in your house in the color scheme that I like-- I'll  likely never see it after it walks out the door.  Please yourself with your colors!"  That said, there are obvious places where you may not want to use a certain color.  Do you really want to make black daisies or an orange rabbit?  There are only a few rules that I use when it comes to making glass and I'm going to assemble them and begin posting them over time.  The problem is coming up with these rules because stained glass is an art form and everyone knows that in art rules are always begging to be broken--it's called Artistic License.  The simplest way I can explain it is as follows: if it doesn't look flat out wrong then it's a valid choice.  Follow your heart!

So with that out of the way let's look at Brenda's Red Fish Window which is no longer giving her any more grief because it's been hooked, skinned and placed in the freezer which, in glass terms, means that it's finished.  In fact, I think it's safe to say that by this point in time it's most likely hanging in the window that Brenda made it for.  Isn't her orange-red border a perfect fit for this window?  Brenda had originally picked a more orange glass (which would have been fine) but in the end she decided to match a color that was already used in the window. Jane returned this week with a scar on her wrist but plenty of determination to complete this Angel Window that she was working on before she had her carpal tunnel surgery.  She said that she wasn't really up for cutting yet but all that needed to be cut were the strips for her border so I cut them and then sectioned them off so she could easily skim them at the grinder, wrap them and then spend most of her time soldering this window.  By the end of the night she had it completed and ready to go. Voila! 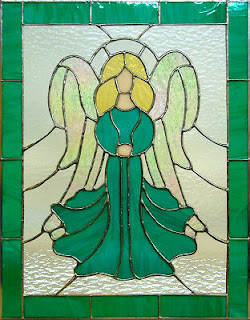 Tim started and finished a 3D Star made from smaller bevels than the standard Star (which is made using 3x3x3 bevels).  This one is half the size and features a circle bevel in the center rather than a square.  The circle actually fit too precisely so we had to skim it a bit to make sure it would fit within the empty square the triangle bevels form when joined together but the end result is something that was really unique and wonderfully compact when compared to the openness of the 3x3x3 version.  Sadly, the larger ones are more cost effective since 2x2x2 bevels cost almost double the price of the larger ones (and are harder to find).  But if you're making this for yourself it's a very nice addition to our 3D Star lineup. 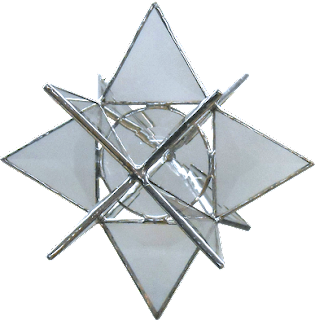 Linda continued working on her Traditional Stained Glass Window by adding her final two borders.  We always add borders last, one at a time, to ensure a perfect fit and that's exactly what Linda did with this window.  Once the center section was tacked together we cut the strips for her inner border and once that border was tacked into place she cut the final clear border which matches her background glass.  Now that it's all cut and tacked together I suspect we'll soon be seeing this featured as a completed project.

This week we also got to see Betty learn the basics of cutting the four corners that square out an oval window.  The trick is to start with a perfect right angle on each of the corner pieces and then grind the curve to match  the oval.  Then once it's all tacked together you can cut your strips for the border and call it ready for solder! 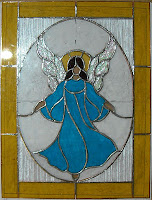 Martha started working on a Fleur De Lis window this week and she's moving along nicely.  With the centerpiece all cut, ground, wrapped and tacked the toughest part of this project is easily behind her.  Next week she'll work on her background and possibly do some border work also. 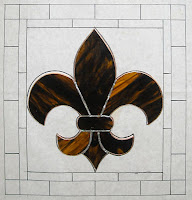 This is it!  This is officially the home stretch of Ann's Geometric design window.  This week she completed wrapping all of her pieces and then tacked the large half circle together.   To save space while she's been working on this I've truncated the pattern by squeezing it in from both ends so in reality it's a bit wider than what you see here.  You'll see it's full length next week when Ann cuts the background glass which joins everything together before she adds her border.

Mary continued working on her Iris Window and by the time she left class she was ready to begin soldering her window.  She had cut the glass for her sky last week and when she brought it back into class she had it already tacked into place.  The unique octagon shape of this window made cutting the border a bit tricky but once you know the trick of measuring out the angle with the next piece of glass it goes quickly enough although, for some reason, I always have to re-grind a piece here and there to get it to fit perfectly.  Nonetheless, Mary now has this window ready for soldering and we'll certainly apply the brass channel to it next week.  In fact, it may even be completed when we see it again! 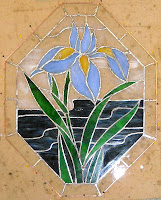 Susan managed to cut out the background to her Fleaur De Lis Box and got the border done as well.  Since the Fleur De Lis actually cuts into the border on the left and right sides she needed to take her time to make sure everything lined up perfectly.  In the end it certainty did and she was also able to add a hinge across the top as well as solder and color it as though it were a finished piece.  With the top 100% complete there are only 5 pieces of glass left to cut and assemble to form the box bottom and that means that this will be finished when Susan returns.

Bonnie continued cutting out the glass pieces for her 16 inch Baroque Lamp and believe it or not everything is now cut!  Alas, she also thought she had everything ground but then she looked in her box of pieces only to discover a few dozen more that still need to be ground.  But that's just a  small bump on the road to her completing what is sure to be a beautiful lamp very shortly.  Rather than showing you a cardboard box filled with random glass pieces we'll take a look at a drawing of what her finished lamp will look like.

Shelley's been hard at work cutting the glass to her Dog Window.  Her colors are muted and flat which lend to the cemetery setting of the window and will also make the vibrant blue dog itself stand ot prominently in the scenery.  With just the dog itself left to cut I'm going to guess that Shelley will be grinding this when she returns for her next class. 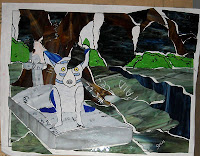 Terry's Flower Window is certainly turning into a very colorful bouquet.  She has violet flowers next to pink flowers, yellow flowers next to blue flowers as well as dark green leaves mixed with light green leaves.  The basic color scheme here is pastels when it comes to the flowers but she isn't limiting herself to those shades (as made apparent by the deep red and purple scattered throughout). As you can see she has it all ground and will now be spending her time wrapping all the pieces that make up this colorful window which will surely impress all who see it. 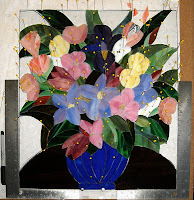 Lastly we look at the project that Cindy started and pretty much completed in class this week.  It's her famous Flying Pig Suncatcher!  She started out by cutting the pattern and then tracing it all of it onto her glass and by the time she left for the night the front side was even soldered.  With just the back side to go I'm sure she'll be working on a new project when she returns next week. 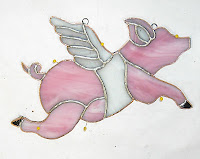 In wrapping this up I'm going to go back to our conversation about what's right and wrong in color choices.  The projects our students make are an expression of themselves and if something looks good to you them then it will most likely look good to others.  Everyone has a basic understanding of colors so it's really hard to go wrong but if I see someone about to make a bad choice I always suggest that they rethink their choice.  When I was a child my grandmother had about 15 coloring that my sister, my Aunt and I would color in when we would visit.  There was a Hansel and Gretel coloring book that I will never forget because our 'rule' was to color the pages in colors that made no sense.  Hansel might have a red arm and his other arm might be green.  The grass might be purple on one page and the bread crumbs might be black on the next.  When the book was completed it was really something to see and made quite a statement.  So much, in fact, that although I can't recall what any other of the coloring books were I can easily remember the Hansel and Gretel coloring book. Although it was all 'wrong' it was something  striking and not easily forgettable the way our stained glass should be.  In other words, don't be afraid of color--embrace it!

So until we return in about seven days time we hope you all have a great week and keep coming back to look at all the great work that our students push out on a regular basis here in the shop.