I Want To Be Free Range!

It's been a hectic week here and the weekend was just as full which might explain why this post is a day late.  We've got things under control now so let's just jump right into the work that our students have accomplished.

Jeanne's Horse Head Window is officially completed!  Cutting out that huge inside curve that forms the neck of the horse was a tedious affair but Jeanne didn't let it daunt her and pushed her way through the cutting and grinding of all that glass which resulted in this beautiful window.  And her soldering was on this project was equally wonderful.  Another Fleur De Lis Window is next on the the list for Jeanne and we'll check that out when she comes back in. 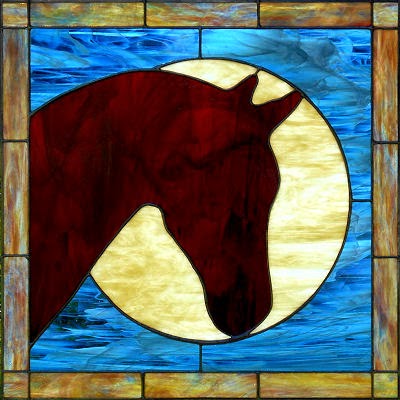 Jeannette managed to complete the two cross suncatchers that she began cutting out last week and as you might have suspected, they turned out to be beautiful.  These are smaller versions of the cross that appeared in the large window that finished two weeks ago.  Since these were a smaller the pieces were a tad harder to work with but she did a great job.  It's a common stained glass misconception that smaller projects are easier to build when the fact is that larger pieces are far easier to deal with.    Next up for Jeannette will be a grape window. 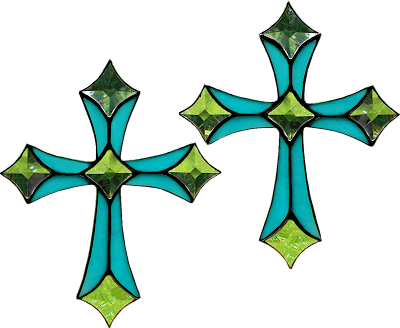 Brenda has got yet another Cross Window under her belt and the red glass that she used really makes it look rich and elegant.  The combination of deep red and clear textured glass makes a winning window every time!  The little flourishes at the top and bottom of her oval that the cross is set in adds so much to this design. 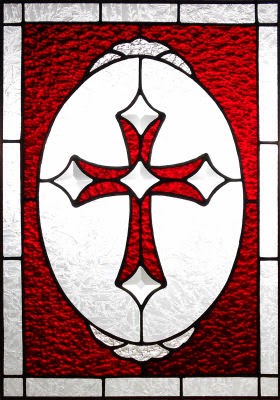 Bonnie's Cross Circle/Square Window is really looking good.  Bonnie added the final outer border and picked a glass that was SLIGHTLY different from the black that outlines the cross itself.  I love the added border and think that the extra work was well worth the time since it really helps define the cross.  Bonnie's taken this home with her to solder so I'm assuming that it will be completed when she returns. 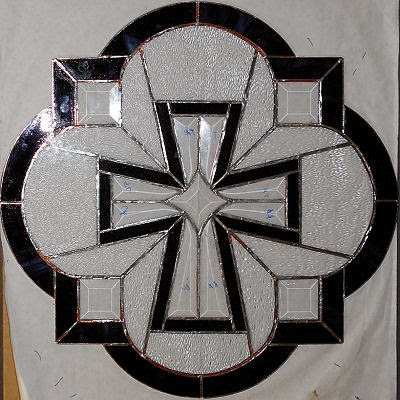 After completing her cross window Brenda began working on this Double C Window while she was in class but I can't recall for sure what the logo actually stands for although Central Catholic is ringing a bell in my head (so that's probably wrong!)   For the record, the two C's are cut actually cut out in the picture below--you just can see them because they were cut out of white glass.  I don't think it will take long for Brenda to get this one finished.  I know she's thinking about using white for the border but we'll know for sure when she brings this back in. 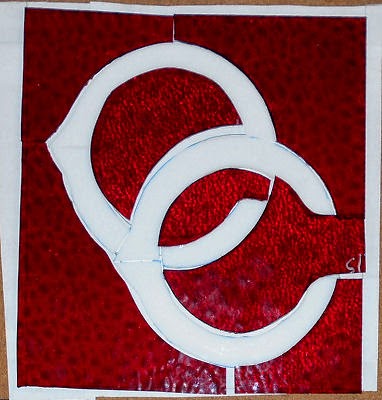 Carol's Winnie The Pooh Window is so close to being completed that I can almost taste the honey.  With the front side soldered and only the back side to go I'd say that she has this under control.  The bright cartoon colors are a huge part of what makes this window stand out and I can't wait to see this one hanging in the window with some light behind it.  And I have to say that I love her choice of red for the border because it draws from the smallest amount of color in the actual window itself (the red shirt that Pooh has on). 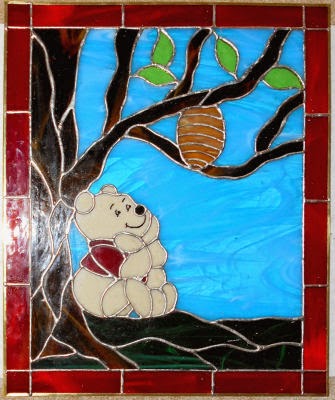 Cindy's Magnolia Window is looking great, but that shouldn't be any surprise to anyone who regularly follows Cindy's work with us.  She has all of the flowers and branches cut, ground, wrapped, and tacked together.  Now she's working on the background pieces.  I talked with her on the phone today and she said it's already completed.  Pictures will certainly follow in out next weekly update.

This is the fourth (out of four) Fleur De Lis Transom Windows that Janet has been working on.  As you can see she just has 2 more pieces of border glass to grind and she'll be ready to solder this one.  She says that she's ready to move onto something new and I can hardly blame her-- working on four of anything can get a little monotonous no matter how great they look!  I hear there's a guitar in her future.  I can't wait to see how that turns out-- I think she's really going to have fun making it.

This is Paula's Iris Window and it's another project that only needs to be soldered before we can call it completed.  This is actually Paula's first window with us and I have to say that she's done a great job along every step of the way.  The front side has a good amount of solder on it so there's a chance this could be completed next week.

I hate to say things like what I'm about to say because it can be taken the wrong way but I have to say that Rowena really impressed me with the work she accomplished this week.  She came in, colored and then waxed her Cross window and then began working on this larger version of Martha's Humming Bird and Hanging Fuschia Window.  By the time she left she had all but the background not only cut out, but cut out beautifully!  She'll be working on the grinder when she comes back in and then she'll cut out her background glass.  I don't think that this window is any sort of challenge for Rowena at all.  And I only just noticed that she has her leaves ground already.  Wow! 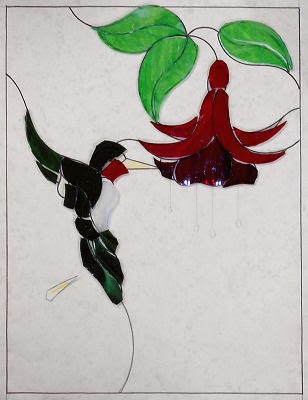 Shelly tacked the center portion of her Bird and Flower window and was going to add a simple yellow border to make this a nice bright window when I suggested that she also add a small, thin green border to it as well.  She liked the way it looked and jumped on the idea as soon as she saw it.  I think that having the green separate the yellow border from the yellow bird really makes it more vibrant and look more professional.  But I've always been a sucker for a double border.

With almost all of her fill-ins in place, Susan has redrawn the top section of her window and will begin cutting that out when she returns.  We're talking about seeing the light at the end of the tunnel here!  I'm going to have to really start thinking about how we're going to mount the bottles in place...

Terry's latest duck window is really beautiful.  She also went above and beyond  by drilling out small holes in the duck's head for the small glass circles that form the ducks eyes.  It sounds simple enough but there's a good deal of skill involved when it comes to making sure that the hole is where it's supposed to be,  Just being an eighth of an inch off the mark will make the duck look odd or deformed, but Terry positioned them perfectly.

And I'm afraid that Ann got short-changed this week because after she left I realized that I never got a picture of what she's been working on.  I guess I'll just tell you that it's a Fleur De Lis and let you see what she's accomplished when she returns next week.

Our next post will cover the Weekend Workshop that we had this past weekend.  We had three people come in and make three different windows in the span of two days.  We're going to cover that sometime before this coming weekend so expect an extra post soon!

Posted by Bayou Salé GlassWorks at 9:52 AM