This weeks tip is very simple:  Stand your ground.  In other words when cutting glass you should always be on your feet (literally).  Sitting in a chair or on a stool limits the movements that your body can make and should always be avoided--  Especially if you have long cuts planned.  Trust me on this one because it can make or 'break' your glass.

Our first completed project for the week is Terry's LSU Tiger/Cross Combo.  She not only did a great job lining everything up so that the cross fits in without looking 'added', but she went the extra distance and colored the lead inside the Tiger Head in the standard copper color while the cross, the background, and the border have been colored in black patina.  It's two toned!  Terry carefully applied her patina in two separate passes using q-tips and the end result turned out beautiful.  Sadly, you can't see the effect in the picture below but you have to love that Tiger! 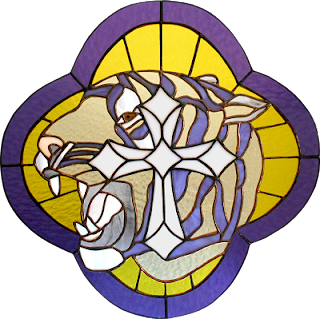 Jeannette finished working on her Pelican Window and went in a completely different direction from Terry by not coloring her lead at all.  Jeannette thought that the gray tones throughout the window would look best with a silver finish and I will say that it's striking.  Jeannette's cutting and soldering have come a long way since she first started weekly classes with us.  One day she plans to do a peacock and I don't doubt that she will be able to do it. 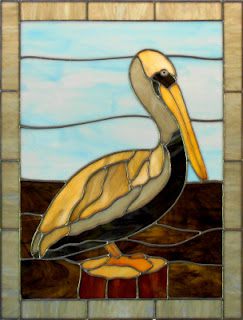 Cindy finished another of her large Kaleidoscope Suncatchers and it's a beauty.  I'm very partial to this design but it IS a huge amount of work.  It's about 9 inches in diameter so although it's large for a suncatcher it isn't large enough to make all of those pieces easier to work with.  I count 14 pieces across which translates to pieces having an average size of less than three quarters of an inch.  It takes dedication to make this design but Cindy never minds spending extra time on a project at all. 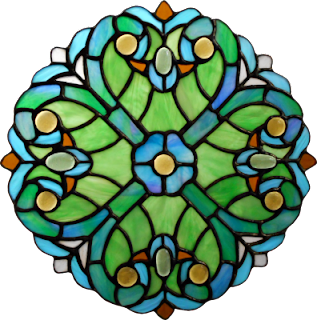 We had two clear beveled windows made this week and this one is Bonnie's first foray into clear windows.  Bevels make up the border which means that Bonnie adjusted her pattern  to fit the bevels she wanted to use before she cut a single piece of glass.  The biggest misconception people have about adding a beveled border is that you can just throw one on anything.  In reality it's not that easy because you need to adjust measurements to fit within the bevels that you want to use.  This limitation comes from the fact that bevels only come in a set amount of sizes.  That said, Bonnie's window looks great and the black patina she used on the lead makes the lines much more viable. 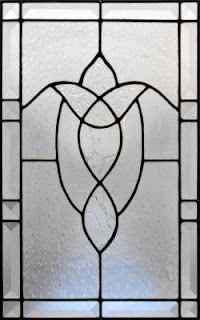 Betty also made a Beveled Window and this one comes complete with a diamond bevel in the center as well as a silver finish on the lead.  The beauty of beveled designs is twofold.  They look incredibly impressive and they're very easy to make.  I don't want to steal any of Betty's thunder but there are only four pieces that she needed to cut to make this.  Of course, if you screw up those four pieces your window will look terrible but Betty has nothing to worry about when it comes to her ability to cut glass. 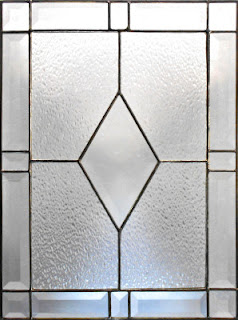 Sue had an extra pair of wings cut out for a Bee Lawn Ornament but no yellow or black glass to make one with.  With Independence Day just around the corner she decided to make this Patriotic Bumble Bee in red, white, and blue.  I have to admit, I love the end result! 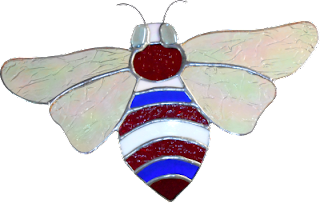 Two weeks ago we saw Carol start a Magnolia Lamp.  She wasn't able to come into class last week but this week she showed up with all of her pieces cut, ground, and wrapped.  We pulled out the mold, applied two way tape to it and all of her pieces fit PERFECTLY.  She got her three sides tacked together and now just has a few fill in pieces and the cap left to go before she starts soldering this baby! 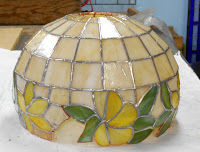 Here's a look at Bonnie's next Clear Glass Window that she started making this week. It's a Fleur De Lis (why do people think I'm joking when I say that FDL's are banned in class?)  All she has left to do with this is to tack it,  add a border and then solder it.  The beauty of this design is that what you see below was all done in one night.  Like I said, these windows go fast (IF you are competent at cutting glass.)

Brenda's Tiger De Lis is taking shape as she works her way down from the top to the bottom of this pattern.  The Tiger Eyes are about to be cut out and once they're in place this large Suncatcher will really have some life to it. 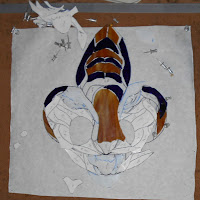 Linda F's Horizontal Sunflower Window has all of its glass attached and she's begun soldering it.  There's nothing stopping this window now and I'll be surprised if we don't see it completed in our next update.  Linda already has her next pattern ready to go so we may get to look at that next week as well.

Cindy, not being adverse to working with tiny, super small, impossible to hold, and agonizing to grind pieces has decided to work on this 2000 piece Bird Panel again.  The bird bodies themselves are easy enough to work with but some of the pieces are so small you need a pair of tweezers and a magnifying glass to work with them!  But Cindy loves it.  :-)

And Paula is back!  It's been a while but her husband is pretty much back on his feet again which means that we get to see Paula once a week again.  This week she got her final border cut and ground for her stained glass mirror.  At almost three feet tall it's a biggie!  The front side of this is almost soldered already which means that Paula will be putting the finishing touches on this very soon now. 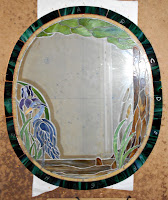 Betty is making Angels.  Nightlight Angels.  These six(?) cute little suncatchers are going to attach to a nightlight clip which then affix to a nightlight.  The end result is a perfect gift.  Just wait until you see these completed. 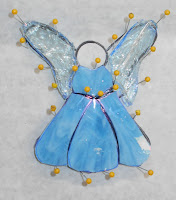 Linda L has the first background all cut and ground for the first of her three beveled Transom Windows.   Once these pieces are wrapped she'll tack them into place and then move on to the background of her second window.  She did a great job cutting these pieces and I know she's going to love the end result.

Susan has switched gears a bit and started working on a small Zen Garden piece.  It's not quite what you think because it's neither a window nor a suncatcher.  I think I'll just let it peacefully reveal its purpose as she makes progress on it week by week.

Becky B has started soldering her Bird Of Paradise Window now that her borders are firmly attached.  With a good deal of the front side completed I think she'll be working on the second side when we see her next.  Becky has her next few projects lined up so I don't think she'll be wasting any time starting her next project. 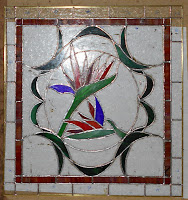 Terry started working on an old friend of hers again.  This horse has been done by her before and she's flying through it on this second version.  In fact, it already looks like a horse.  I've always been a fan of the 'circle turned square' window so maybe that's why I like this pattern so much. 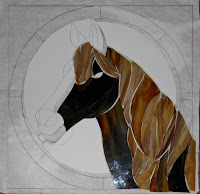 Ann has the front side of her Flower Bouquet Window done and will move along to the second side when she returns.  I'm sure that this will be finished in two more classes.  I'd be tempted to say next week but I know that because of its size this will take a while to wash, color, re-wash, and then wax.  Sadly the job isn't complete when you are finished soldering your window. 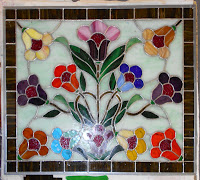 It looks like Charlie has only three pieces left to wrap before he can start soldering his last window.  There's no doubt that we'll have a group shot of all three of these windows when Charlie comes back in to class because these are essentially finished now.

Rowena's Flowing Leaves Window is really taking shape.  She plans to have all six cut before she starts grinding everything into place.  When she starts grinding these she'll be doing them in a jig to make sure that everything fits together perfectly.  The jig will ensure that nothing grows or stretches out of square.  As you can see Rowena has really gotten the hang of using her Pistol Grip Cutter because all of her lines are nice and straight (the way we like them). 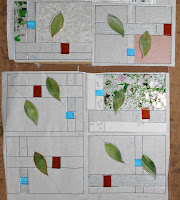 Shelley's Aquatic Themed Window looks better and better each week.  I want her to use nice bright, vibrant colors for her fish because the deep rich colors she picked for everything else could actually wash out the fish themselves if they aren't bright enough.

And to wind this up we'll take a look at the pattern that Becky S has begun working on.  It's a large window but she's already got her pattern all traced out and ready to trace onto glass.  The pattern is her own design and I was lucky enough to get to look at Becky's Sketchbook which is filled with beautiful work.  Talent abounds in her, that's for sure. 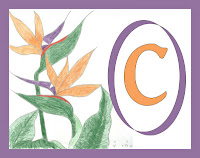 And that's it for this week.  Classes begin again tomorrow and I'm looking forward to seeing everyone again along with a new student.  And that means that you can expect to see a butterfly when we return.