Something that a lot of students don't tend to notice until they've made a handful of windows is that smaller is never easier when it comes to stained glass.  Our students tend to make their first project and say, "I'm NEVER going to make a big window because this was more work than I ever anticipated."  Then they make a series of small projects with tiny, near impossible to shape pieces.  Remember that the complexity factor of a project is directly related to the size of the pieces making up the window.  In general, bigger is better.  However, there can be a problem with scale when you get to enlarging a window and I'll explain that next week.


So Myrt's Outhouse Window is officially out the door.  The wheel on her Wheelbarrow which is made of nothing but lead lines came out beautifully.  And her OUT-er border couldn't be a more perfect color.  She's done a few other windows while she's been making this so it only appeared to take a while for her to get this finished.  Next up for Myrt is a Flowers and Butterflies window 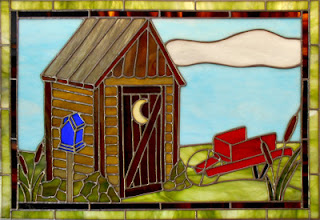 Ann's huge Flower Bouquet has also become a completed project.  I'm all for larger pieces but this is one BIG window.  We had trouble getting two people to work on one table while this was on it.  But Ann persevered and it is marvelous. 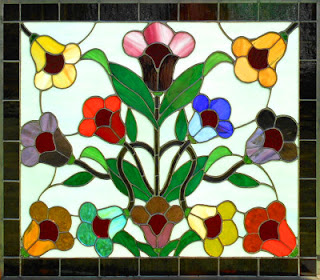 Charlie's  completed his 3 Hall Tree inserts and has them all washed and colored.  When he finishes the Hall Tree itself and has these panels installed I'm hoping that we can post another picture of these. 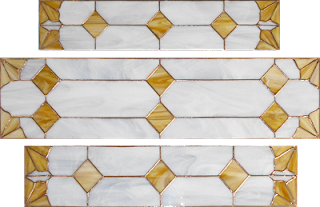 Linda F has put the finishing touches on her horizontal Sunflower window.  I like the layout of this one even more than I do the original design of this window because it looks more like a view into a field of sunflowers. 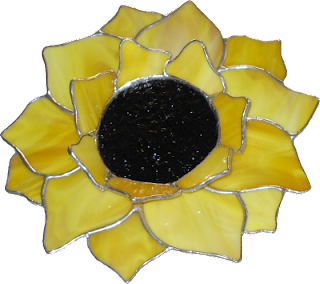 Terry's latest Horse window is taking full shape now.  There's just the backgrounds and borders left to cut and then she'll be doing the soldering. 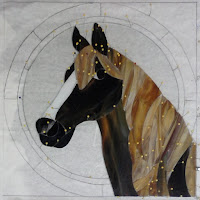 Brenda has the top and right side of her Tiger De Lis ground and is making good progress with small pieces.  Brenda is a firm believer that you should never give away any glass that was gifted to you unless you never want to see it again. 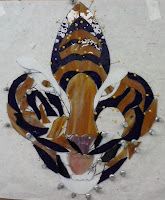 Martha is in the process of cutting out two large suncatcher Angels.  She stacking the glass on top of each other until she starts grinding so you can see the two different color schemes that she's using in the picture below.   This is just a guess but I suspect that she'll be cutting her wings next! 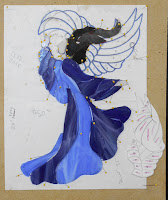 Paula got the final border AND the zinc channel attached to ger Bathroom Mirror.  This is a large project and the picture doesn't give you any idea as to how large it truly is (almost 3 feet high).  Getting the zinc channel around it was a learning experience for sure but this is almost completed now. 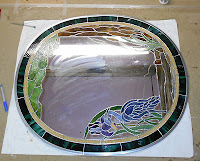 Cindy came in with each of her birds cut out and ground with only the small eyes left to be cut.  Once those 10 tiny pieces were fitted into place she began wrapping everything .  This appeared to be another quick project for Cindy because it's almost complete.

Mary Grace is back in action even though she has a bum arm after her operation.  Even though she's taking things a little bit at a time she still managed to get this small Bee Lawn Ornament cut , ground, and partially wrapped.  Since the smaller Bee is much trickier than a large one I'd say that she's doing great.

Linda F's To the Moon And Back suncatcher is cut, ground and now being wrapped.  I've always been partial to Moon and/or sun windows  and think that this one looks great already.  And Linda likes this so much that she is talking about 'Pulling a Betty'. 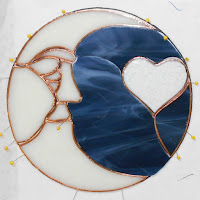 Susan is someone else who's 'Pulling A Betty' by doing these two Scarecrow Lawn Ornaments.  She played around with the pattern a little bit and is going to make one as it was originally designed and the second one will be modified.  Once they're both completed she'll weigh the pro's and the con's and decide how she wants to make any others.

Betty has 22(! )Angel nightlights started but we aren't going to change the number in her catch phrase just because she's loves nightlights!  She actually got two of her Angels completed this week but it happened at the very last minute of class so she didn't get them washed or colored.  I promise that we'll take a closer look at them next week but for right now you can see them resting one on each side of the board that holds some of the the other angels that she's currently grinding.

Natalie is all finished cutting glass for her Crab Window and is ready to enter the soldering phase of her Crab's life.  Now she'll be able to sit down and relax throughout the rest of this project since the hard part is officially over with. 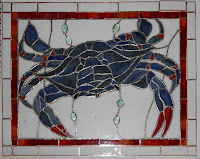 And Rowena has completed cutting out all 6 of her Leaf Window Pane Panels.  She put the first one in the jig and literally had it ground within minutes.  Once that was done she traced the leaf that she'd cut and ground onto the glass and then added the stem line and cut out the opening for them.  Doing it this way ensures that all of her lines will match up perfectly.  It's safe to say that Rowena has this down!

Carol came in and set into place the 'fill-ins' of her Magnolia lamp, attached the cap and then began soldering.  I must say that she's taken to soldering a 3D project like a fish to water.  I wish I had picked up this ability as quickly as Carol has.  She's taken it home to resume working on it there so I can't wait to see what she walks in the door with when we see her again. 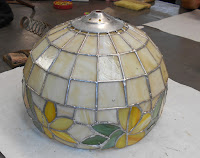 Becky B is has started soldering the second side of her Bird of Paradise and has even gone as far as to pick out her next pattern.  I have no doubt that this will be finished when she returns to class next week so expect to see this one hanging up with some light behind it in our next update. 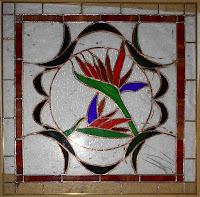 Gale  completed cutting and grinding her flowers while she was at home and this week she cut out her first border for the window.  Once the center circle is tacked together she'll grind the round yellow border pieces, wrap them and then tack them on to the circular section of her window.  Then the fun begins.  ;-) 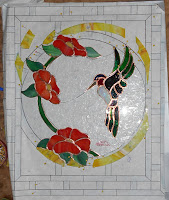 Linda L  is moving along steadily with her three beveled transom windows and has learned how to work one step at a time to ensure a perfect fit.  Grinding everything at once may seem like an efficient way to do things but in the end if it's all about fitting things together a little at a time that will give your window a professional look.  From the top down we have a look at Linda's window without the back ground cut, then with the background cut and wrapped, followed by everything being tacked into place.  She'll be working on her second and third panel next week. 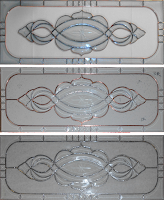 Our newest student, Vicki, had a memorable start to her first class and didn't get to quite finish her butterfly.  As you can see, it just needs to be soldered and on a butterfly that's just a 5 minute job.  I'm thinking that within 20 minutes of her second class she'll have this underway and then start working on her first real project-- a Fruit Bowl Window. 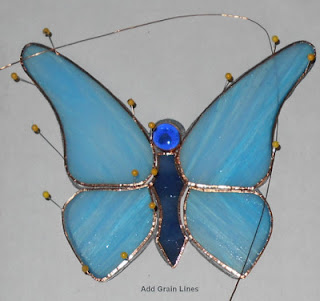 Jeanne made this quick Fleur De Lis Suncatcher as an interim project.  It just needs a hook to hang it by and a little finessing with the solder and it will be finished.  And I can guarantee that will only take 10 minutes or less allowing Jeanne to move on to an LSU Tiger Window when she returns.

That's all there is that's fit to print this week.  We'll have plenty more to see when we return next week. Same bat time, same bat channel.