It's certainly been a while since we've had an update but we're finished with holidays and vacations for a while so we're ready to get back to our weekly schedule again.

We're going to start this year off with a tip about the curves in your stained glass patterns.  Something I see in almost all of the patterns I find on the internet (especially the free ones) are curves that are essentially straight lines.  Worse yet are curves that look like stop signs.   You should always exaggerate any curves that are in your patterns because the lead you cover them with will become an eighth inch wide thus 'softening' the curve somewhat.   If the curve is essentially a straight line then you will lose any feeling of flow in the design.  Below is an example of a bird I found online and to the right of it is the altered pattern that I created from it.   Curves should be graceful and your lines should all flow smoothly.  I feel the example below demonstrates this perfectly. 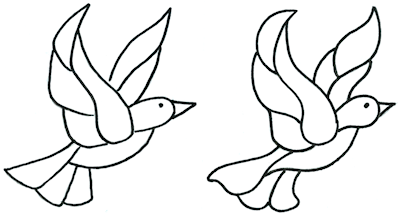 And with that out of the way, wow! Jeanne's Tiger De Lis Window really turned out beautiful!  I was worried that you wouldn't see the deep purple in a picture but it photographed really well.  What you can't see in the picture is all of the texturing that Jeanne did in what looks like the black sections of this design-- they're all lead.  And the use of two borders really brings out all of the ambers in the window. 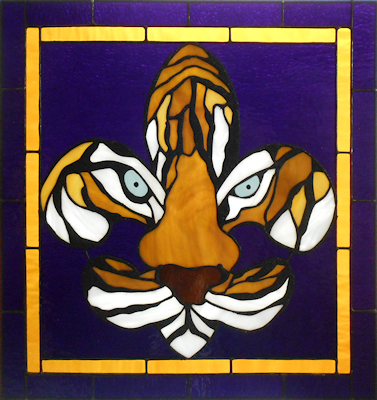 Linda F's Autumn Leaves Window was completed this week and she made excellent use of her Fractures and Streamers glass in the background.  This window definitely says 'Autumn' as she had hoped it would. 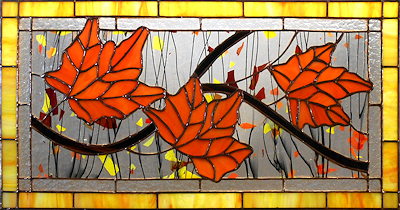 Terry completed another Terry Original Design, this one being a Cardinal in a Cross.   This is a window that Terry made completely on her own while at home over the holidays.  Keep your eyes peeled and you might spot Terry's Cardinal making another appearance later on in this update. 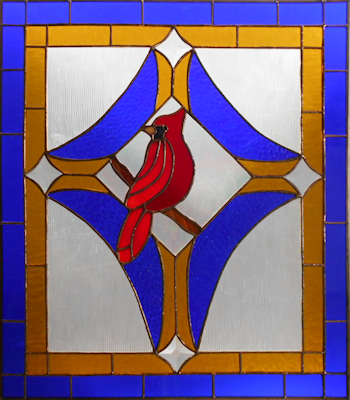 Jan's completed the bottom panel of her two Library Bookcase Windows and her straight lines are perfection.  What's next?  Jan is thinking that she wants to make a peacock but in a smaller version from our last two peacocks.  And we have a perfect pattern for that. 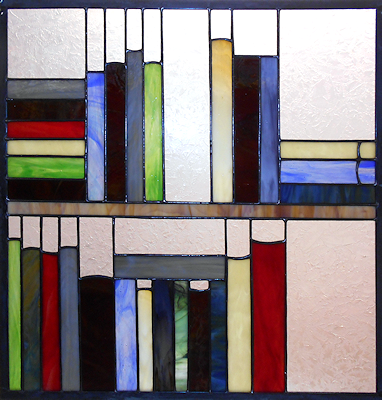 Brenda made another Beveled Cross suncatcher and the bevels work wonderfully with her choice of iridised white glass.  I think Brenda can make these in her sleep now. Although they look simple, the key to making these crosses is to keep it all symmetrical. 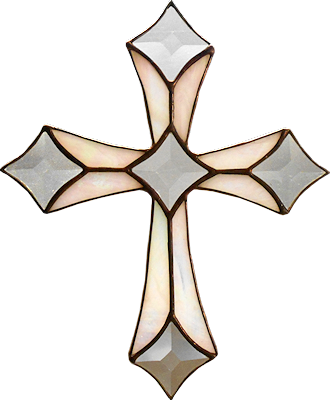 Susan D finished her second Christmas Tree Lawn Ornament this week.   Her star on the top is like icing on a cake and I suspect that we'll see this added to every one of these we see made from here on out.  The big difference between this tree and Susan's last tree is that this one is made with only red ornaments. 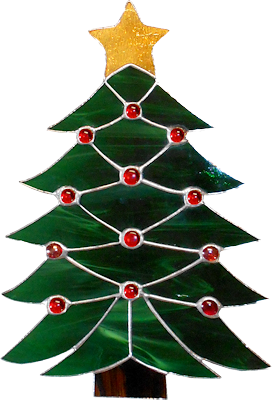 Lynn M has completed the grinding on her Tree Of Life Window and it's already striking.   I love the design and plan on doing one myself in the near future.  Lynn has begun the wrapping process and once that is done she'll tack this all together and then attach her border.  The big question is, will she make it a single color or do it multi-colored border to match the tree?  Time will tell. 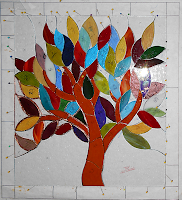 Well, it's official now-- Becky S has all of her glass cut and ground for her Tulip Flower Window.   She's still wrapping some of the inner pieces but this should be all tacked together when we see Becky return.  Her soldering always goes quickly and her technique is flawless so she'll be moving along to a new project before you know it. 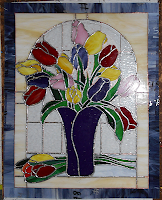 Carol purchased a few bevel clusters that she's decided to incorporate into windows starting with the one you see below.  She's surrounded this one in a clear purple trim which was trickier than she thought but in the end the time spent doing it will pay off greatly. 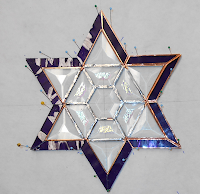 Cindy has orders popping up left and right and this is her latest commissioned piece.  It's all straight cuts and Cindy is the first of two students who purchased a pistol grip cutter this week.  A pistol grip allows you to make perfectly straight cuts and in a window like this it's very important to be precise.

Address windows are in vogue right now as Jeannette started hers this week.   She got all of the background glass cut out along with the numbers and even has most of it ground already.  Before you know it she'll be attaching a border and letting her mailman take a look at her completed piece.

Myrt has begin cutting out a cardinal that she knows she wants in her next window.   When she returns we will have the completed pattern drawn which will be based around this particular bird.  She wants a tree and some leaves so we'll see what I dream up during the week between classes. 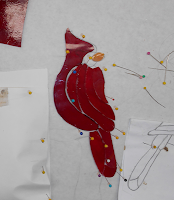 Betty now has all but 5 pieces of glass left to go in her Fleur De Lis Window.  She's going to be soldering this very soon and using a lot of lead to cover all of the trim that she's completely encased in foil.  It's a beautiful effect and it will match the quality of the work that she's put into this project. 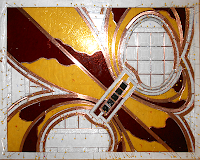 Although the holidays are over we're still not finished with Christmas themed windows.  Linda L has made great strides with her Mickey Mouse Christmas Window and is grinding him to fit together as we speak.  There's really only background and border left to go on this. 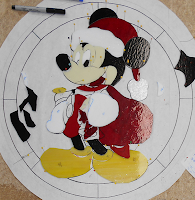 Next up we have a more traditional Christmas project which is being done by Susan D.   She has her pieces cut out and started working from the top down at the grinder but then decided to skip the complex face and jump on down to Santa's feet and legs.  I love the fact that Susan has redrawn the pattern so that they eyes won't have to be painted onto this Santa.

Susan R is also working on finishing up Christmas Patterns and her Noel window is looking beautiful.  She's got nice straight lines in her text and her colors are very Christmasy to say the least.  We've had to add a few pieces of glass on the top and bottom to make this stable as the original pattern was sure to fall apart.  Luckily those new pieces won't be distracting at all-- in fact, they'll make the text more legible. 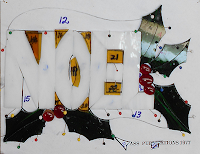 Martha got all of the clear glass cut out for her Cross Suncatcher.  She also got a lesson in using a pistol grip cutter and took to it wonderfully.  That means that we'll certainly be seeing nice straight lines in all of her projects from here on out. 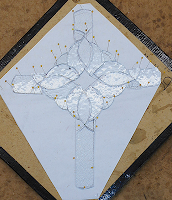 Mary Grace has started working on this flower design that I had drawn up ages ago.   She's got all of her petals cut and has begun grinding them already.   She's far more confident in her cutting nowadays because grinding as you go is a very advanced method of making windows which leaves no room for errors.  It's looking good and all of her petals have exaggerated curves to make it look more flowing' after the lead is applied. 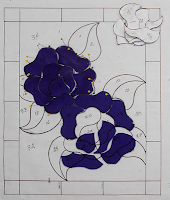 Sheri has just one break to repair in her Peacock Window and then she'll wash and color it.  That means that unless she misses class this will be completed when she returns.   We've already held it up and know what it will look like, but a nice cleaning will make it look even better than it already is.  She's done beautiful work here and next week we will show you the fruits of her labor.

Paula was very undecided as to what to do next so she shifted through patterns and then decided that after making all of those boxes she wanted something else that would 'expand' her stained glass horizons.  So a lamp it is!  she's got her background glass almost completely cut out so she's moving along nicely.   I think she's really going to enjoy doing this project. 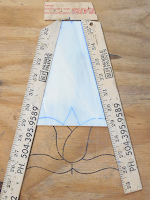 Rowena started a new Butterfly Lawn Ornament and has it all ground and ready to go together.  I have no doubt that we'll see that happen next week because she already has the pattern for her next window picked out and is anxious to get started on that.

Lara has decided on an unlikely project that will certainly turn heads.  It's hard to see right now but she has the state of Louisiana drawn out and cut into sections representing all of the parishes in the state.  When it's completed this map will be both colorful and practical for Lara. 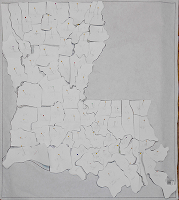 Things never seem to go smoothly for me.  Case in point, Shelly got away without my taking a picture of her cat window so I guess we'll see more of that project next week.

And that's a wrap on our first post of the new year.  Weekly updates are about to start occurring again now that the  holiday season is behind us so expect another update a week from now (if not earlier).