Nothing Great Ever Comes Easily

We're starting things off this week with some information rather than an actual 'tip'.  I've found that many students believe that touching up the soldering on a window after it's been soldered is something that I don't have to do to my work.  That couldn't further from the truth.  After a window is soldered you ALWAYS have to go back and make adjustments.  In fact, most times you have to essentially re-solder the window  to get the lead beaded  the way you want it to.   This misconception of a perfect soldering job most likely comes from people watching me completely solder a window and then taking it immediately to the sink to wash it.   What they fail to notice is that I never stop soldering a line until it's perfect.  Fact is, I may go over one line 3 or 4 times before I move along to the next line.  If you give your window one coat of solder and expect it to look perfect then you are skipping the extremely important step of touching up.   Moving slowly as you solder reduces the amount of touch ups you have to do but we ALL have to fix up our windows before we finally unplug our iron.  I'm no exception and neither are you.

So with that out of the way let's see what Sheri is doing this week.   Well, well, it seems that Sheri has started work on a top secret project so we're going to skip the picture this week (and again over the next few weeks) and move along to someone who doesn't have anything to hide.  :-)

Becky S has completed her Tulip Window and it is certainly breath taking.  Her attention to detail is always amazing and everything about this is pure perfection all the way from the colors up to the grid work that lines up flawlessly.   Another job well, well done. 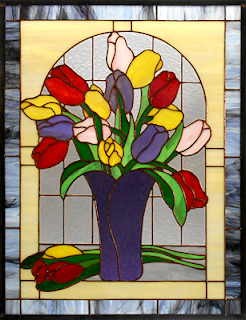 So Carol got two windows completed this week even though I did my best to stop her from accomplishing that goal.   Sadly, its finally happened-- I dropped a student's window!  Luckily I was able to 'catch' it with my foot and minimize the damage.  Luckily for me the window was repaired before Carol left.  You can't even tell that it hit the floor.  As for her second Beveled Window, well Carol did it entirely by herself after watching how I fit the trim around the first bevel last week.  I was VERY impressed with her work because it's not an easy thing to do at all yet Carol did it all on her own after watching me do it once.  Beautiful! 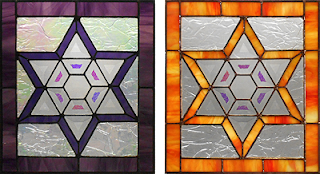 Roxane finished her Street Address Window and used a zinc channel on it so she could attach this window to her house using screws.   She's used colors with a lot of contrast so the fact that this window won't have any light behind it won't affect the viability of the numbers at all.  We call that good planning. 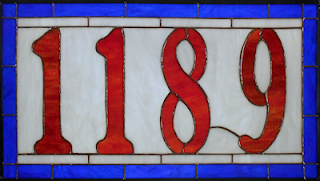 Terry completed her Butterfly Window and it turned out so nice that she's already begun working on a second version of it.   The changes she made on this first one were all for the better and I'm thrilled to see that she was willing to  sacrifice some work and re-cut numerous pieces to make the window better rather than settling for inferior work.  It's always a tough decision when there's wasted time involved but as you can see it's well worth it. 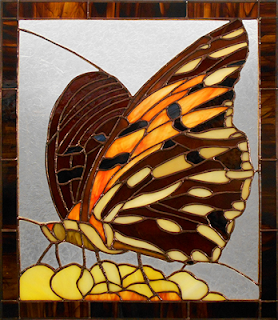 Cindy made this large Geometric Suncatcher and has all of the curves in it looking really smooth.  The green glass that she used is iridised and it really gives the suncatcher a distinct look. 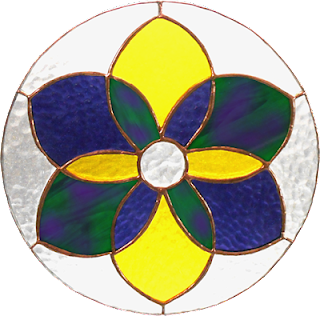 Wow, Tasha's newest Owl is another wonderful project that is every bit as beautiful as her first one.  Alas, she's moving on to an entirely new project next week and that will be a pair of Comedy and Tragedy Mardi Gras Masks.  If they turn out half as well as this project did she'll be doing VERY good indeed. 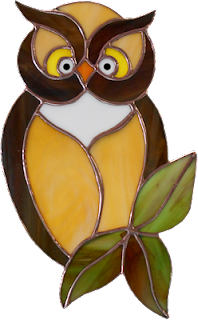 Bonnie completed all six of her Angel suncatchers and went the full nine yards by twisting two strands of wire together for the halo's on these six Angels.  It's extra work but as they say, 'Nothing great ever comes easily'. 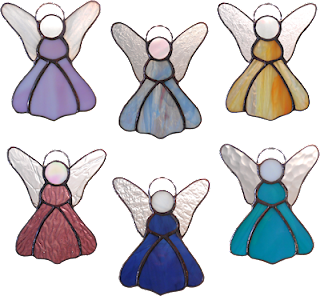 Susan R finished her Noel Window and did a wonderful job with it.  If you can read the word then the project speaks for itself.  Me, I say, "Great job!"  I know she told me what she'd be working on next but I'm old and frequently confused so I'll be just as surprised as you when I find out what's up next on Susan's plate. 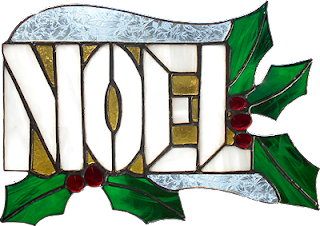 Now, Mary is our newest student and she made her Butterfly Suncatcher without any problems at all.  In fact,  she didn't even break a single piece of glass (incorrectly, that is) while learning how to cut glass.  I, on the other hand, did!  I'd like to call it beginners luck on Mary's part but she's already proven herself to be very skilled at cutting glass and luck was not a factor. 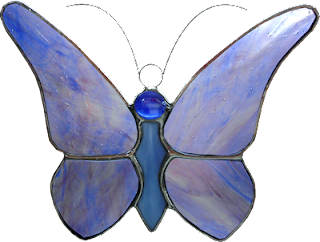 Jeanne now has three beveled crosses cut out and ground to fit perfectly together.   She's going to wrap these and then the soldering process will begin.  Knowing Jeanne that won't take long at all.  These crosses have always been a favorite of mine but there's far more work involved in them than you might think because bevels always vary and it's hard to cut these without having to grind them to fit each bevel individually. 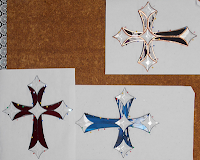 Linda F got all of her Mardi Gras Mask ground while she was in class and then started work on the foiling process.  She's moving along quickly with the foil and I won't be surprised to see both the border attached and some soldering done on this when she returns. 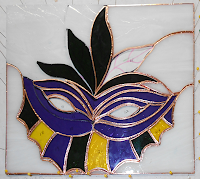 Ann got to work soldering her large Cross Window and as far as I can tell she's got most of the front side completed already.  At this rate this window will be out the door before you know it.  It's become a popular pattern as I've had to pull it out from under the table to show numerous students throughout the week.  When I do that the response is always the same:  "Wow, it's much bigger than I thought!" 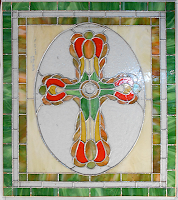 Jeannette has her Street Address Window all soldered together and the only thing left to do is to add a zinc channel to it, color it,  and then take it home.  She also started cutting out one of the popular Easter Rabbit Suncatchers and she'll resume work on that when we see Jeannette again next week.

Lara's State of Louisiana is all cut out and she'll start grinding this beast of a window when she comes back in.   Don't let the picture fool you-- this is one large window.   It already looks great through, and that's before it's even been ground to fit! 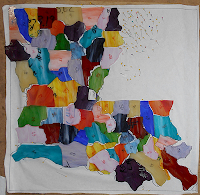 Betty now has the front side of her Fleur De Lis Window completely soldered and has flipped it over to begin working on the back side.   Since this window contains a lot of glass that's been foiled over completely we are breaking the rules by tacking the back side before she begins the actual soldering process.   Also, she is leaving the window here in the shop rather than taking it home with her because now that it's tacked together it's far more susceptible to breaks due to the window flexing on the soundboard that it's being built on. 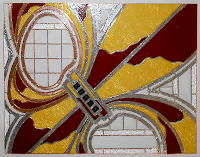 Cindy has started working on one of her favorite projects-- Birds on a Wire.  She's already got two of them cut out leaving only five to go.  This is a great way to use up scrap glass because you don't need a lot of any one color in particular.  And it always looks great.

Brenda has her Fleur De Lis Mask tacked together and is adding a three layer border for it out of purple, green and gold glass-- Mardi Gras colors.  The first two borders are already attached and the final purple border just needs to be foiled now. 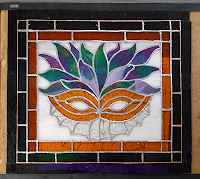 Linda L's Santa Mickey is all set to have a round border cut for it next week.   This week she cut out her background glass using something that we haven't carried before.  It's called Glacier and it's a new favorite of mine.  Although it's hard to see it in this picture I'm sure you'll surely love it when the window completed and hanging up with some light behind it.  I can't wait to use it myself. 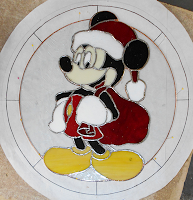 Martha got her clear textured cross cut out last week and this week she wrapped it and tacked it together.  Next she'll cut out four background pieces and fit her cross into a rectangle which will then be bordered to finish the project.  She also worked on a beveled Fleur De Lis which is ready for its background to be cut as well.  Two projects, one student-- that's both pretty good and an excellent use of time. 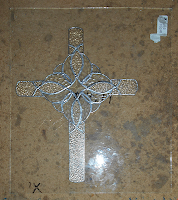 Mary Grace resumed work on her Double Flower Window and has all but three pieces cut and ground.  She'll be tacking together what she has finished to cut the remaining pieces because that will ensure a perfect fit.  Normally we'd cut all of the pieces before grinding but Mary Grace lost two of her pattern pieces and since she had her glass pinned to the pattern this was the only way to make sure things would line up. 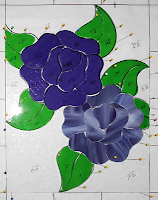 Myrt had one Cardinal cut out when we last saw this Cardinal Window and this week she has two cardinals cut out.   She's made the second one female so the colors are a bit muted as compared to the male.   The final pattern will be nailed down when we see this project again next week. 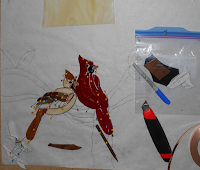 Paula is making headway on her Tulip Panel Lamp and you can see that she's got one of the panels in the jig ready to be ground.   If you're going to make a panel lamp you need to grind it and tack it together in a jig or it will surely be off when you try to solder the first panel to the last panel.  Paula's will be perfect. 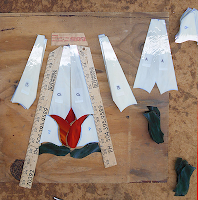 Susan D's Santa Claus is almost together now but due to an unfortunate accident he's missing a chunk of his face!  Luckily, Susan will be able to replace it easily enough and it's not nearly as harrowing as it sounds-- After all, it's just glass.

Lastly, Shelley's Stormy The Cat Window is moving  right along and I won't be surprised to see it get its border pieces attached when she comes back in.  Soldering shouldn't take long on this one especially with Shelley's soldering abilities which are FAR better than my ability to remember to get a picture of Stormy before it leaves the building each week!!!

And that's it for this post but expect another one shortly as we will start reporting on the two weekend workshops that we've had this month.