Get The Lead Out

We had a pair of Stained Glass Weekend Workshops in January and now we're finally getting around to posting what was completed in them.  First off I have to state that we thought there was only going to be one Workshop but we screwed up the dates and told two people of our four students that it was happening on the wrong weekend!   Everything worked out in the end and we had two small, but very personable, classes that went wonderfully as you can see in the pictures below.  Now let's talk about what took place on those weekends. 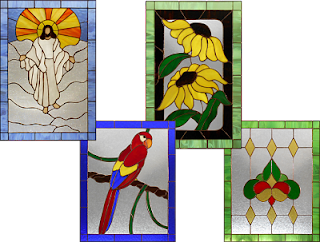 We had two returning students (Angie and Roxane) and two new students (Sandra and Rhonda) who had never made a stained glass window before.   Sandra and Rhonda started their weekend off with a cutting lesson that lasted about an hour.  At the end of that hour both of these delightful women were able to cut out the moon shaped curves you see below with no problem at all.  The biggest rule in cutting glass is learning that before you cut an inside curve you need to cut 'point to point' first.  Sandra and Rhonda passed with flying colors (as did Angie and Roxane, but then again they're old pros by now!) 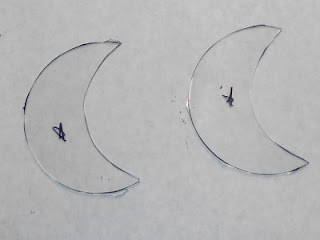 Sandra decided that she wanted to make a Parrot Window and the colors used in this patten really make this a stand out window.  As you can see below, Sandra has most of the glass cut out for her window with just the background glass and the eye of the parrot remaining. 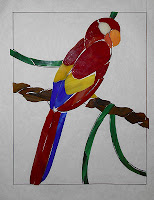 Once all of her glass was cut out we added a carpenter's square to the left side and bottom of her window and Sandra began grinding her glass to smooth things out and to ensure a perfect fit.   You can see that everything fit together wonderfully and the next step is for Sandra to begin foiling her window and then tack it together and solder it. 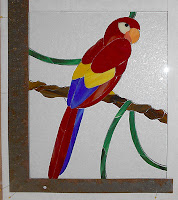 And here's her completed window.   Sandra did a wonderful job soldering and had very little trouble despite some minor apprehensions about the process.   In the end she left with a perfect window that no one would think a beginner made, don't you think? 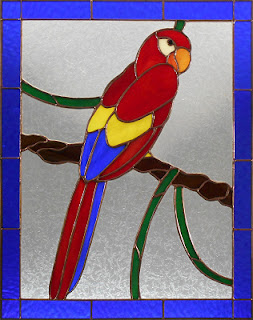 Rhonda worked on a Geometric Window that we fondly refer to as 'The Genie'.  This window is made up of a lot of straight cuts which need to line up perfectly or the effect of the design is ruined.   You might think that the pieces below have already been ground but then you'd be wrong because they aren't!   As you can see, Rhonda did a wonderful job cutting her glass. 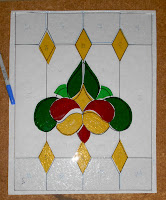 Once all of her glass was ground, foiled, and tacked together Rhonda put the final solder bead on both the front and back of her window.  Look closely and you can see the spool of lead that she's literally melting onto her window with a soldering iron. 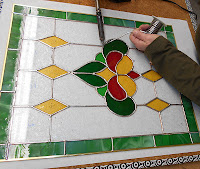 Here is Rhonda's finished window.   All her lines are straight and her curves flow evenly and symmetrically which is key to a great looking geometric design. From start to finish Rhonda showed that she had an attention to detail which reflects in her completed window. 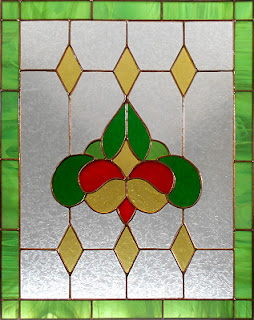 Roxane decided that she wanted to make a Jesus Window so she sent me a picture of this pattern and asked if she would be able to do it in two days.   Since this is her 5th or 6th (I've lost count) Workshop with us I knew that she was certainly up to the task so we drew up the pattern, skipped the glass cutting lesson and went straight into the cutting process as you can see below. 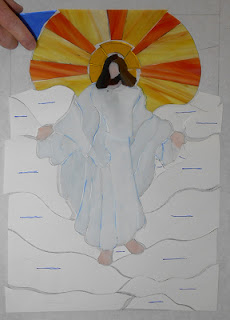 After she got her pieces ground and wrapped Roxane tacked all of those pieces together so she could get her final border cut and attached.  That last border goes quickly and easily thanks to the strip cutter.

Roxane turned out yet another quality window in a record amount of time!   Her Jesus Window looks like it would fit wonderfully in any church (and even looks better than many church windows that I've seen)!  Gorgeous! 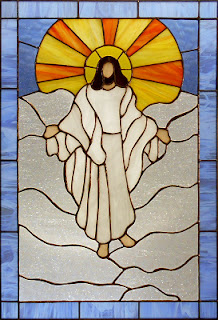 Last, but not least, we have Angie who, like Roxane, has attended many of our weekend workshops already.  She decided to make the Double Sunflower Window with a double border and here it is with everything cut but the borders. And no, this has not been ground yet, that's just Angie's Stained glass skills showing in this early picture of her window.

With the first irregular border cut, ground, and tacked to the center section Angie got her final green border cut out on the strip cutter and then sized.  Here you can see that she's skimming some of her border pieces and getting ready to foil them.

Angie's finished window is indeed a work of art and the color she picked for her final border blended perfectly with the colors of the rest of her window.  Angie has only ever taken Weekend Workshops with us and yet she's able to complete windows on her own while she's at home away from us.  That's what I call an attentive student (and a good friend)! 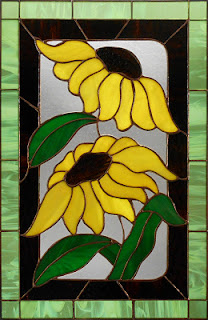 Although I regret that all of our Weekend Workshop Students couldn't meet and get to know one another, I did enjoy the more personable one-on-one time we had by splitting the class up over two different weekends.  I suppose it's a case of looking at the glass as though it's half full or half empty.  No matter, both weekends were fun and VERY enjoyable and everyone's glass was half full or more!