Corners are SO important. They can turn what would be a good looking window into an amateurish window.  The detail of corners is small but very noticeable so you should always make sure your corners are aligned properly especially if your piece involves two or more borders.  Below we see two corner squares which are very much off. 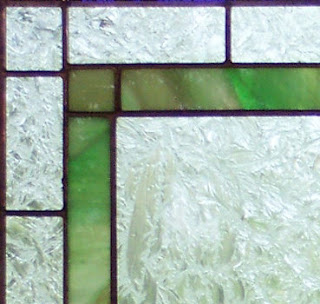 All lines that run from left to right should be at the same measurement.  The same holds true on lines that run up and down.  Look at the orange arrows below and you can see that the red lines do not follow through properly. 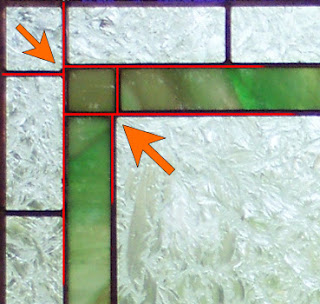 The next set of borders you see are correct because all the lines run into each other perfectly without jutting off into weird edges. 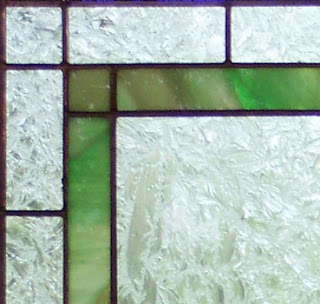 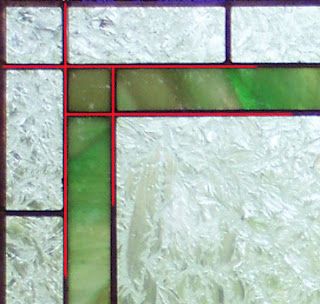 Tracey's Crying Jester Window is a work of art for sure (complete with beautiful corners).  Everything from the cutting on down to her soldering make this window something she can be proud of-- and this is only her first project with us.  Imagine what she'll be turning out when we look at her work 10 years from now!  :-)  Next up for Tracey is a Street Address Window and we'll show you what that looks like next week. 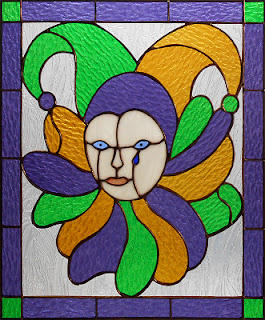 Jan scored Two points with this Baseball Diamond Window.   Last week she was in the Fourth quarter with the Bases Loaded  when she called a Time Out, Took Her Ball and went home.  This week she Threw Her Gloves Down and scored a Hole In One.  In a Hail Mary play she finished soldering it, washed it, and then Kept The Ball Rolling by coloring and waxing this piece for a Slam Dunk while Knocking It Out and onto the Mat! If you ask me this is a solid Hole in One or, well, perhaps a Home Run With The Bases Loaded.  No matter how you look at it it's a big score for Jan. 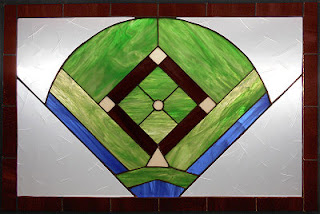 Here are two views of the Beach Keepsakes that Bonnie made this week.   Simple, effective and very beautiful if I do say so myself.  And the best part is that there's no pattern required!

Shelley's John Deere Tractor Window turned out perfectly.  It's the colors in this window that give it its definition.   The green and yellow are perfect and convey the name John Deere without ever having to print it on the window. 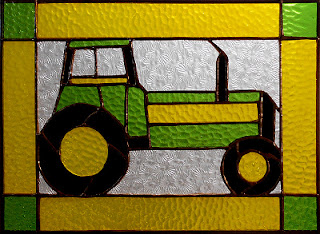 Linda L finished her Breast Cancer Window completely on her own and I didn't have to touch up even one small spot on it.   This is excellent work through and through. 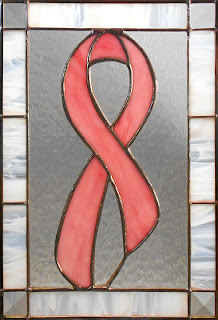 Mary Grace finished the soldering on two of her Angel Suncatchers and then added the wire halos that these hang from.  We've found that adding a length of ribbon from the halos really make this type of suncatcher stand out prominently (and help dress it up). 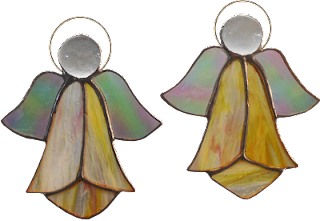 Susan R completed her Rabbit Yard Sign and it's another job well done.  She's got a slew of windows made in this size so she can change the seasonal ornamentation of her yard both quickly and efficiently. 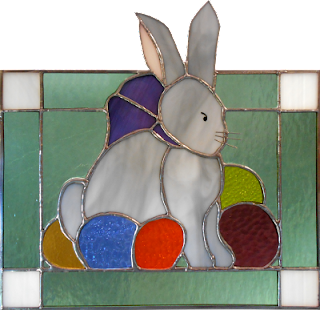 Mary Grace started work on a Basket Of Eggs this week and she's moving along nicely with it.  Although it's hard to see, she cut the bottom of the basket from one piece of glass and then made numerous cuts on it before separating it into about 20 pieces.   Working this way ensures that it all fits together perfectly without the need for tedious grinding.  We'll show you in detail how this was accomplished next week. 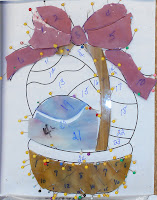 Terry worked on her latest Cross Suncatcher and it's a biggie!  She cut the four extending pieces of the cross from one piece of glass so that the flow matches and it is beautiful.  This will surely be hanging next week 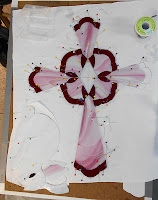 Paula started working on this large Angel with a Horn Suncatcher and has it ready to be ground.  In fact, most of it is already ground so there's little left to do on this.   Paula may alter the pattern a little so that the horn actually touches the Angel's lips-- we'll see what happens when she comes back in. 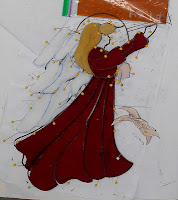 Cindy is on a Flowered Hand Mirror kick again as she has to get five of these completed.   She has one completely ground and is grinding the second one as we speak.  She's stacking each of the pieces on top of one another so it will be difficult to show all of her progress until they each get tacked together. 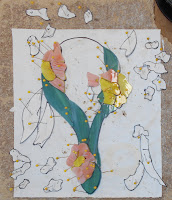 Mary has started working on her second window and the pattern is a very striking one indeed.   ULM stands for University of Louisiana at Monroe, and the logo is of a Warhawk.   With all of the red and the amber glass cut out I'd say it's safe to say that Mary is making wonderful progress (and it's already fitting together nicely as well!) 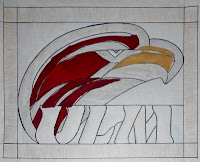 Susan R's latest project is a joy to make, literally!  This is another of her early Christmas Suncatchers and we're strategically placing holly berries along the 'Y' which will hopefully stop the two leaves on the right from bending off.  If the berries don't anchor it enough we're just going to add some background glass to strengthen it. 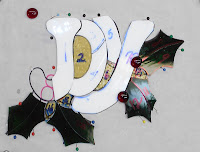 After finishing her Breast Cancer Window Linda L went back to work on her three Welcome Signs.  She's moving right along on the top one but she says she wants to re-cut the butterfly wings because she's not happy with how they turned out.  Luckily they're easy enough to cut so the process will only set her back about 30 seconds.   That's the kind of re-cutting that you never mind doing. 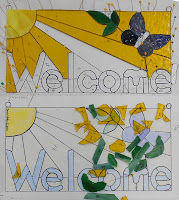 Martha is really making progress on her trio of Fleur De Lis Windows.  Once the six deep curves have been cut the rest of this will be easy.  She's got three down now leaving her with just three more to go. 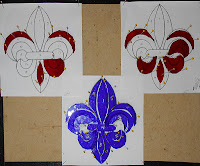 Lara has officially completed cutting all of her glass for her Louisiana Parishes Window and everything has been tacked together.   She has a heavy zinc channel attached and even got as far as soldering some of the front side of this large project.  Last week I had reported that her final border had been cut but I was wrong-- all that had been cut were the final corners (which she wanted to do in the same glass that the inner border was cut from).  I'm going to make a 'two more week' prediction on this window. 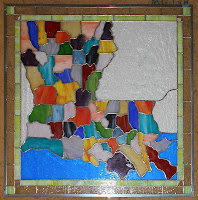 Jeanne has one of her butterfly Lawn Ornaments completely ground and a second one cut out to the point that the first one was last week.  That means that these will both be ground when Jeanne comes back in and then she'll be able to wrap these and then get down to soldering.

Barbara has decided to take a break from the mental stress of choosing colors this week so she began grinding her Mountain Scene Window.   Two other students have told me that try as they may they can't see the train in this project even though I keep talking about a train.   Well, that's because the train isn't in there yet.   This window will get it's mountains and trees completed before we add all of the wire overlay and the actual train cars. 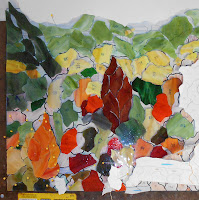 This is Brenda's latest Cross which I gave credit for to Terry last week.   As you can see Brenda got all of her foiling completed on this so she'll solder this and wrap it up when she comes back to class. 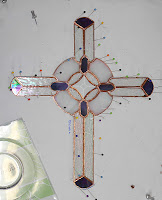 And this Cross belongs to Myrt (I know that because I started writing names on the patterns for these crosses so I won't mix them up anymore.  It's all cut out and Myrt was working almost exclusively on the grinder this week.  She's a good halfway towards finishing the grinding on this so she's moving along quickly on this project.

Betty's got another Christmas Bells Window under way and she says she not only loves the window when it's completed but she loves making it as well.  I will state for the record that her grinding skills have increased ten fold since she worked on her Industrial Fleur De Lis Window.   I've found that if you really push yourself to go beyond your comfort zone you will find that everything you do after that will go much easier.  Look how beautifully this fits together. 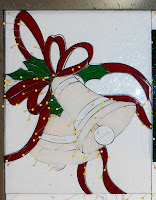 Becky S has both of the Sunflowers cut out for her Double Sunflower Window and she's started grinding it as well.  Sadly, I did not get a picture of her progress this week so I'll show you what her last one looked like (in black and white). 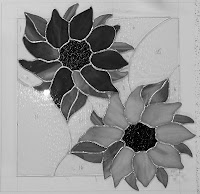 This is Bonnie's latest Window and we're calling it Pixel Perfection for now.   once it's been delivered we'll post the final picture of this piece but until then all I can do is tell you that Bonnie is now ready to start soldering. 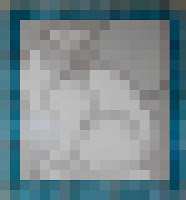 That about wraps up all the glass pieces this week.  We'll catch you again in seven days!