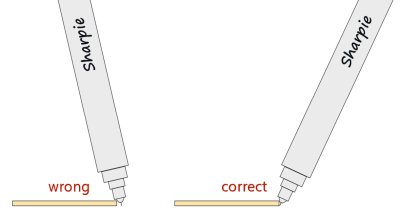 Well then, Carol completed another wonderful Panel Lamp and I think she has the process down to a science now.  She even went so far as to design this lamp herself hoping that it would fit atop its Eiffel Tower base without looking out of place. I think it works beautifully and that she couldn't possibly do any better.  This is what I call an eye catching lamp. 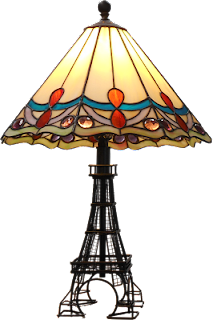 Paula finished her Large Angel Suncatcher and what a beautiful job she did on it.   Her long flowing lines are smooth without a hint of any jaggedness.  Everything about this angle flows gracefully and that's a testament to good stained glass making.   Beautiful! 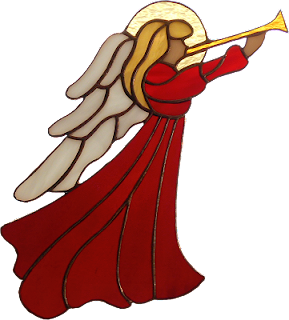 And Cindy completed the first of her self designed hand mirrors and I'll state for the record that it's a keeper.  The colors are spectacular (she's used iridised green for the leaves) and the design makes this far more functional that the other flowered hand mirrors that we normally see done here. 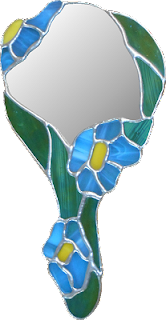 Next up we see that Rowena got her two crosses completed.   The four angles in the turquoise  cross on the left each form perfect right angles, and the center lines on the cross on the right also form right angles and THAT is the sign of a great cross. 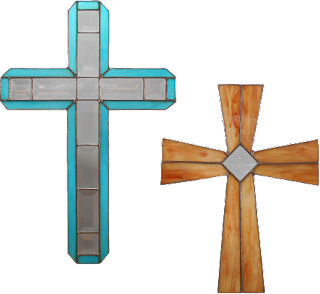 Susan R finished her Ladybug Lawn Ornament and as you can see her spots fit beautifully even though it altered from the pattern pieces dramatically.   It's all about taking your time and Susan did wonderfully with this. 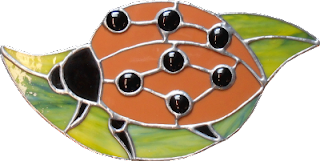 Terry also completed 2 Crosses but they were finished just before class ended so she wasn't able to get them washed for a good photo shoot, but this picture more than gives you a good idea of what they looked like.   I especially like the Blue one. 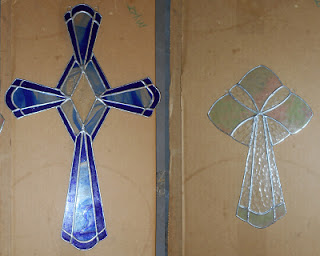 Brenda has made considerable progress on her Oval Iris and has this almost completely cut out already.   She's a quick worker but more than importantly, she's a precise worker and that always shows in her completed projects.

Tasha got a lot accomplished as all of her Bowl of Hygieia Window (the universally recognized symbol of Pharmacy and medicine)  has been cut out.   We discovered that she had a large problem with her cutter but now that she has a new cutting head she should have a much easier time getting her glass to break correctly.  She's begun the grinding process so this project will soon be in her past.

Jan has taken our Fusing Workshop and had decided to make a Fused Checkerboard Platter which uses 3 colors of glass which overlap to form a fourth color.  It's made by cutting 180 precisely cut squares which Jan has cut out already.  As you can see from her picture she's already begun to assemble her platter which will be ready for a night in the kiln when Jan next returns. 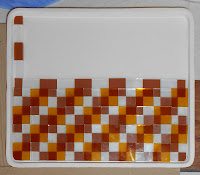 Lara began cutting out her Scales Of Justice Window and she got all of the scale cut out pretty quickly of I do say so myself.  Before she started on the background she asked if she should use pattern pieces or if she could just cut the background from a square piece of glass that she would trace the finished scale onto.  After some consideration I figured that the latter choice was the best decision so Lara began grinding her scale leaving the background for later.  By the end of the night Lara's Scale was ready for wrapping! 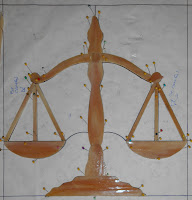 Becky S finished the background pieces for her Double Sunflower window and then got it all tacked together.  Once that was done she got some strips cut for her border and then cut those strips into the complex shapes required to flower between her flowers.   Having the flowers cut into the border slows things down but it's always a nice effect and one that I use often in windows that I make. 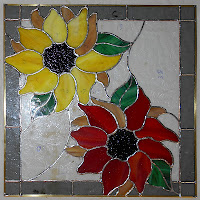 Melissa started working on her first window with us and she decided to make a Stylized Fleur De Lis.   The wonderful thing about it is that she's putting her own spin on the design  which we'll talk about as she gets more cut out.  It's already looking great and her cutting is wonderful! 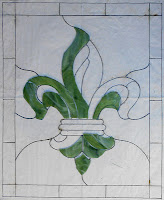 This Fireman Window is looking HOT!   Susan only has a few pieces left to cut and she might even had gotten them cut if she hadn't accidentally left her glass at home.   You know, it happens a lot and it's nothing to be embarrassed about especially since she was able to wrap a lot of the pieces that she already has cut and ground.  So in the end Susan had no time wasted and plenty of progress to show by the time class ended. 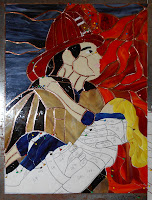 Jeannette started making this abstract window out of scrap glass and some bevels that she had just hanging around the house.   She began soldering it in class and with the front side completely soldered and the back side halfway completed I'll say that she finishes this next week. 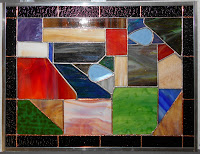 Tracey accomplished quite a bit of work this week as she got the center number section of her Adress Window tacked together.  But that wasn't all she did-- she also got all but the background cut out.  That means that when she returns she'll get a lesson with the pistol grip cutter  and then hopefully finish off a lot of her background pieces.

We've already seen that Cindy had completed her Hand Mirror and now you can see what she's making next:  a second Hand Mirror but with a different color scheme.  I won't be surprised to see Cindy making a lot of these as the weeks and months go by.

then we revisit Terry again who also worked on her Oval Day Lily Window.  I must say that it looks as though she'll be wrapping this project up any time now.  The colors are as stunning as the design.

So Myrt started working on a Humming Bird and Fuchsia Window of her own and she's got the flower all cut and ground already.   We've already decided that she doesn't need to cut pieces for her background because we'll handle this the same way that Lara is doing her background.  I'm also going to offer up an idea for a minor change and see what Myrt thinks about it when she returns... 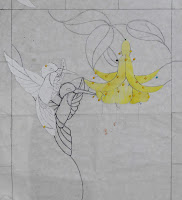 This week we got to see Martha get her three Fleur De Lis' all ground and ready for foiling.  The backgrounds themselves won't take long at all to cut, grind and wrap so I'll state for the record that the hardest part of the work on these three windows is behind Martha now. 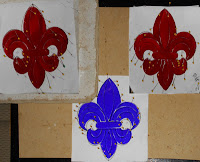 Susan R has started another  Mermaid Suncatcher which we've seen before and have always loved.   The design on this is so simple and graceful that everyone always comments about it.  In fact, I wish I drew this up myself! 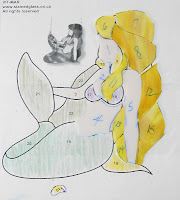 Rowena got the center bevel of her next Transom Window tacked together and will begin cutting her background glass whenever the Glue Chip comes back in stock.  This transom won't be as long as the last one that Rowena made but it will still be a large window.  On the plus side of things, there aren't a lot of pieces in it!

Lastly there's Mary who resumed grinding on her Football Window and is a good quarter of the way towards having it all ground.   She's moving along at a nice even pace on it and is really getting the hang of using the grinder.  More on that later on!