Do You Want Some Squirrel Head?

Curves in patterns set more of a tone than people suspect.   Myself, I've always believed that in art things should be soft and subtle.   There are, of course, straight lines in nature but in most everything you look at, flowers, clouds, animals, and even in peoples faces, you will find curves are what make them more appealing to the eye.

Below are two patterns, the left of which I found on the internet.  It's perfectly acceptable but I can tell it was drawn by someone new to pattern making.   The pattern on the right is my altered version of it.  I've exaggerated any existing curves and made the flower flow in a more natural way.  Whichever you prefer is completely up to you but I will state for the record that most all beginning artists tend to draw with harsh straight lines.   It's one of the things you try to 'unlearn' in any art class.   Try adding curves to your pieces and watch how much more natural they turn out when they are completed. 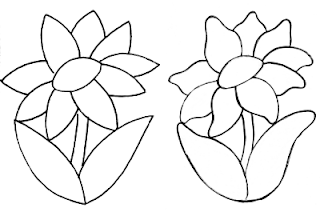 So let's look at what we have completed this week.  Tracey's Address Window turned out to be nothing short of perfect.   Her soldering was amazing and the picture speaks quite well for itself.   She went with very subtle color shifts in this window and I think that it couldn't possibly look any better.

Bonnie's little Biplane Window was completed this week and it's a cute window for sure.  The colors really make this look like something that would go in a child's room and that's exactly where this is going.  And the little 'wire work' wheel under the back side of the plane helps give it that much more realism.  It wouldn't hurt to skip it, but just look at what it adds by having it there. 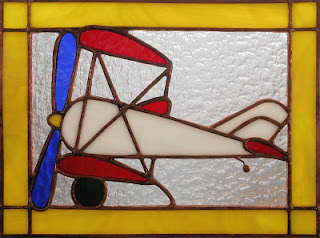 Roxane completed her Two Cardinal's Window and  decided to go with a double border which works perfectly on this design.  She spent the day soldering the back side and once this was completed she began working on a second project which we'll see later on. 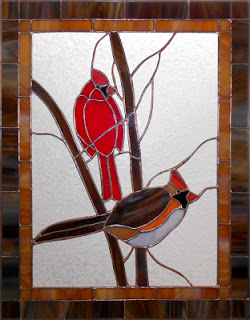 Linda L finished her Cardinal Suncatcher but not before we changed the design of the beak.  In the original pattern it looked like something that you'd find on a buzzard.   Linda likes this so much that she's making a second one which we'll see further on down below. 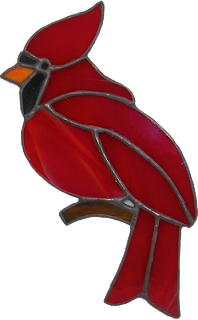 Shelley's Moonburst Window was also completed this week and it's a looker for sure.  This was based on her Sunburst scene with the only difference being colors and the hooks that allow the window to be displayed in a landscape orientation. 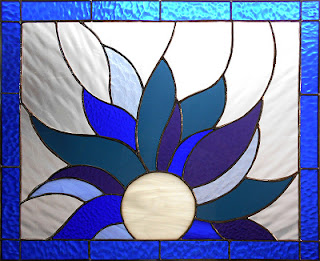 Susan D completed a medium sized 3D Bumble Bee and will be attaching this to her next Flower Cornucopia Yard Decoration.   It's a massive project that she works on a little at a time so that it doesn't overwhelm her. 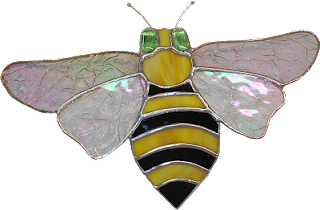 And Betty completed two more of her Sunflower Windows this week.  It's pretty plane to see that the two flowered version is largely based on the smaller design with a second sunflower added on top. 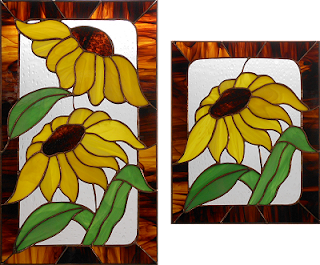 This is Roxane's newest project-- a Sunburst Cross Design.   There are a lot of straight cuts in this window so Roxane will be using her pistol grip cutter extensively throughout this window.   And it's very important that all of those straight lines connect perfectly so this may take some time to grind, but it will surely be worth all of the effort. 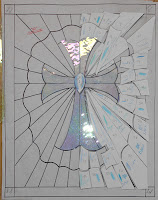 Becky's Birds on a Wire panels are moving right along. She's beyond the halfway point on both of these panels and in this class she learned the easy way to make small round eyeballs:  just cut a small square and hit the points on the grinder.

Tasha has all of the glass cut out for her newest project, a floating balloon in the shape of the letter 'J'.   It's hard to see now but once these are fitting together you'll easily see the balloon.  The tricky part will be the cuts surrounding the tied knot that holds the air in the balloon on the bottom. 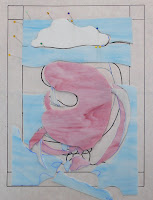 Melissa began grinding her Semper Fi Window and has three letter fitting together rather perfectly if I do say so myself.   She's getting the hang of the grinding process and it won't be long before she gets to wrap all of these pieces in 7/32 foil.

Jeannette got all of the glass cut out for her Duck Window and although nothing has been ground yet it's already looking great.  Since it practically fits together already I don' think Jeannette will be spending very much time at the grinder.  Don't you love the sky in this window? 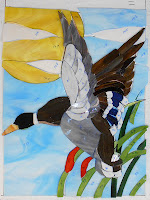 Next up we have two people working on Small Peacocks.  Up first is Carol's and as you can see she's working from the top down.  She's leaving her feather centers blank and will fill them in when the rest of her peacock is ground so she can see exactly what the colors will look like without any guesswork.

Secondly we have Bonnie's variation.   She's picking colors one feather at a time and filling in towards the center.   All of her accent colors for the feather centers have been cut and she's coloring the feathers to match the accents.   It's completely different from how Carol is doing hers but neither way is wrong.  I've found the worst thing you can do is pick all of your colors at once.  Instead, chose your colors as you build your window and you'll find that most of the 'second guessing' yourself will go out the door.

Myrt has begun soldering her Humming Bird Window and for the record I have to say that no one solders quite like Myrt.  She takes her time and I never have to touch up anything on her projects.   Just look at the joints she did in the closeup of the humming bird.  I couldn't do a better job myself.  This will likely be completed when she returns next week. 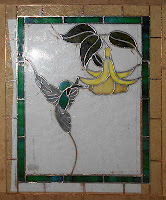 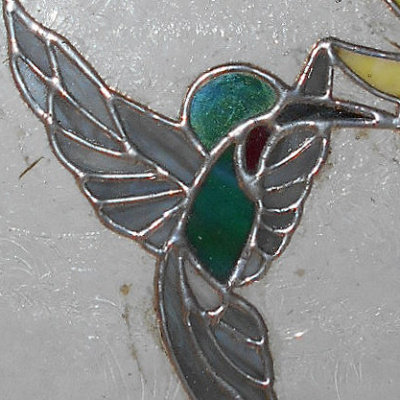 Brenda's Stylized Fleur De Lis is all cut out and waiting to be soldered.   In the end she didn't leave the centers of the arms open since she wanted to get some more orange into the design.   I have to  commend her on her use of large squares while grinding.   The use of the larger squares made this window line up perfectly throughout its entire length and not just in the corners. 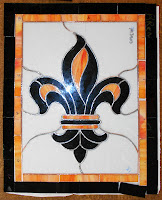 Ann has her Fleur De Lis all tacked together and will begin cutting the clear textured glass for her background when she returns.  With just 24 pieces of background to cut she'll be working on borders before you know it.

Barbara H has all of the autumn colors cut out for her Tran Window and only has a few more left to grind.   Once that's done she'll wrap this and tack it together before the sky gets cut out.  Once the sky gets attached she'll solder this as a completed window and then add the bridge and the train  afterwards.   Many people are anxiously awaiting to see this train and I'm one of them!

Susan R is moving along full steam ahead on her Spring Window.   Things are coming together nicely on this and she'll be wrapping her pieces with foil before you know it. 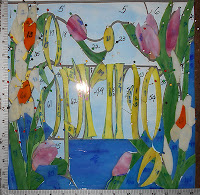 Jan was working on  putting the final steps for three  different projects this week .  First off she's added some random squares and rectangles to her fused glass platter and then she finished cutting out all of the glass for her flower hanging panels.   She's begun the grinding process and will continue grinding when she comes back in. 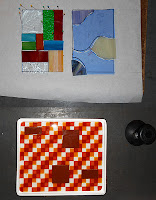 Linda F is very close to completing her Dragonfly and Water Lilies Window and since this is the back side I'm thinking that we will see this among our completed windows next week.  This is another project that I can't wait to see up in the light-- I know it's going to look spectacular.

Martha now has all of the borders cut for her three Fleur De Lis Windows which are all stacked on top of one another for easy transporting.  If you look VERY carefully you can see a hint of blue poking out from under the top red Fleur De Lis border.  She'll be soldering before you know it.

Mary looked at many colors for her Bird Window but in the end her colors line up wonderfully.   There isn't a single color her that dominates the scene and that's nice planning.  Next up for Mary will be the leaves and the branches that  run between all the birds. 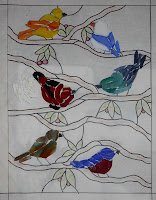 Here's Linda L's second Cardinal Suncatcher.  You can see it's almost all cut and ground already and since the beak isn't in place you can also see the original lines for the 'buzzard' beak.   Our change makes it look MUCH better! 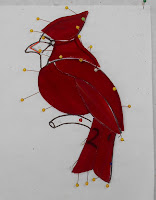 This week we got to see Cindy begin cutting glass for a six sided panel lamp.   She'll assemble each panel one at a time in a jig to ensure that each panel lines up properly.  Without the use of a jig a lamp like this would never fit together because a panel lamp is all about perfect geometry. 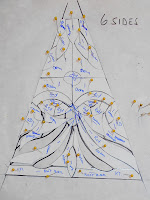 Jeanne cut out all of the glass for two Bumble Bee Lawn Ornaments but it got packed away before I could get a picture of it.  Once these are ground she's going to learn how to assemble projects so that the glass seemingly curves.  In actuality the glass doesn't curve at all and the same is true for most of the stained glass lamps you see in stores today.   It's fun to do though, and the Bee is one of my favorite things to make. 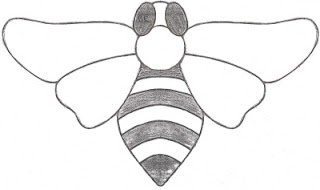 And lastly, Terry spent her night redoing the repair that she did a few weeks ago.  It turns out that she was given the wrong size for the finished window so things had to be adjusted.   Once she finished that she helped Brenda work on her window and then she called it a night.   Just like I am now.