Sometimes even a simple straight cut needs a little coaxing. When you cut sharp angles it helps to ease into that final break as I'll show you below.   If we plan on saving the section of the glass with the red star on it and we have to cut on the black line you might be tempted to cut score the glass and then break it off with your breaker/grozier pliers.  Don't do it!   There's a VERY good chance that you'll end up breaking the point of your glass off.  Instead, 'lean' into the curve by first cutting off and extra glass (line #1).   Then slowly add an angle to it by scoring and breaking off at line #2.  Repeat for line #3 and then make your final score.  This will ensure that the point of your piece remains sharp.

Is this overkill?  Well, yes, a little.  Myself, I know what my abilities are and would get this out in two cuts by skipping cut #1 and #2.  Practice by cutting some scrap strips that you probably have lying around.   And remember that even if you need to make four cuts to get your piece out intact, you can make all four scores at once and then break them off one at a time starting at line #1.  As always with glass, taking your time and not rushing into things saves time in the end. 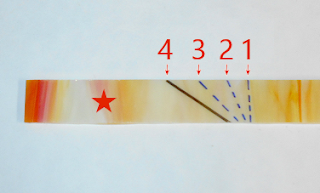 Well now, Jan's Mother Mary Panel was completed this week and I have to say that I understand why it's so popular in class already.   There are two other students who have started this pattern before Jan completed soldering this!   Now that it's finished I suspect that other classes will be very interesting in this pattern -- I've made two myself already! 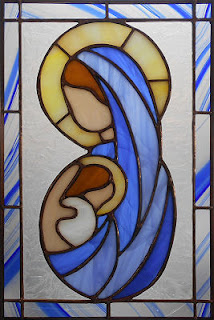 Betty's Rose Window is another gorgeous piece of work.  I like to think that I pushed her into doing something new rather than the same patterns, but Betty was the one who actually came up with the design.  Beautiful. 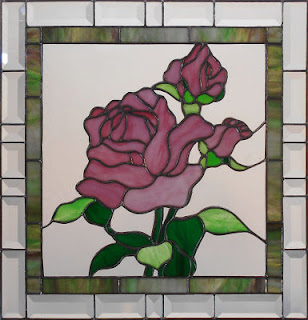 Linda F finished her Art Noueveau Tulip Window and it's certainly arresting .   It's such a nice simple design with beautiful flowing leaves topped by a simple tulip.  But I think it's really Linda's choices in color which make this finished piece of art. 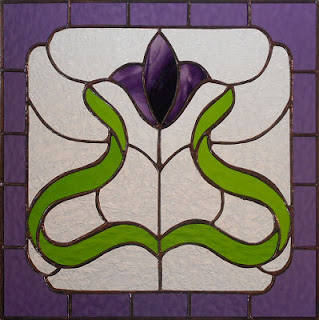 Susan R finished her Pumpkin and Corn Panel and again the corn is what really makes this (to me). All of those random colors just come together beautifully and realistically which prove that attention to detail always pays off when it comes to your stained glass work. 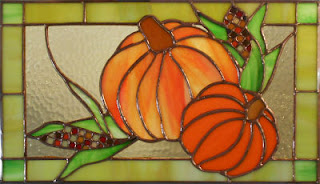 Rowena completed her Mallard Window and this is a pattern that I've loved since I started making it way back in the 80's.   You just can't lose with this design and I think I'll be making one for myself eventually.  Great work indeed by a student who excels at her craft. 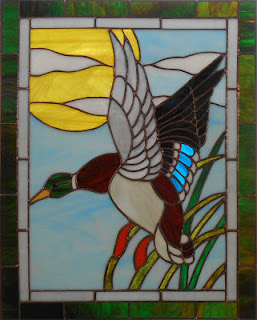 Rowena also made a few Suncatchers this week and they are equally beautiful.  She did everything herself from start to finish on these which includes making and attaching the hooks to hang them. 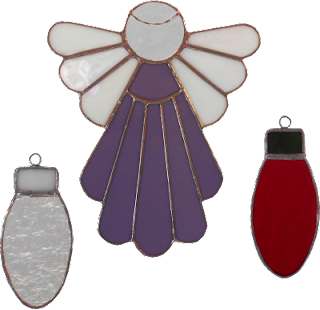 Brenda's pair of Transome Windows have been completed and she's looking forward to moving along to a new project.   She did wonderful work on these and I think she's capable of anything at this point.  And that's why she now has a studio underway at her house!

Carol began and finished a Magnolia Suncatcher this week that she does NOT like at all.   Me, I saw no problem with it but she didn't even want a picture to be taken.  Then she decided to not waste time in class by putting the finishing bead on it and moved along to this quick Candy Cane Suncatcher which she completed in record time.   How can you NOT like this?

Jeannette came in with a HUGE portion of her Joy  Window cut ground and foiled.   There are really only the bells in the upper left hand corner left to cut out and then the background and 2 borders.   I had no clue that this would be moving along as quickly as Jeannette is running with it.  I will say that it's a testament to just how good Jeannette has become at this.

Now that Martha finished her two Cross Windows she's moved back to her Daylily Window.   The cutting is just about competed so she'll be moving on over to the grinder when she returns.

Becky has her Geometric Window all tacked together now and it will get a border put on it when she returns.  You can't really see where the solid lead sections will be right now but once this is completed there will be no way to miss them! 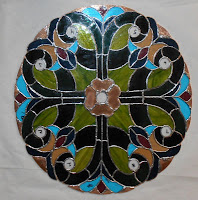 Sheri's newest window is a variation of our standard medium sized Peacock that Sheri has modified all by herself. She has a great majority of this cut out and will start filling in the missing inner feathers when she comes back in. 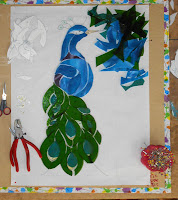 Beth came in with a good portion of her Dragonfly Window background all foiled.   She didn't wrap the section where the dragonfly will go because she still needed to cut the opening for the dragonfly to fit into.   So the first thing she did was to grind and tack together the dragonfly that she's cut out last week and then she traced it on top of her background piece.  After making a few quick cuts everything fir into place beautifully. 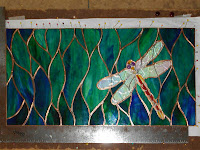 And, as I expected, Lara got all of the glass cut for her Starry Starry Night Window and then moved on over to a grinder to get everything fitting together.   She's doing wonderful work and I do believe the hardest part of making this window is behind her now. 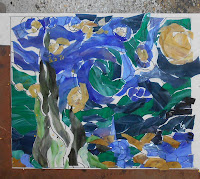 Tracey's one of the two other students (3 if you count me) who saw the Jan's Mother Mary window and had to make one also.  At this point Mother Mary is all ground and only needs to be wrapped and tacked so we can add the background glass and borders. 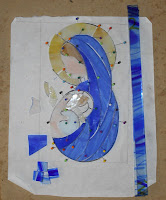 Bonnie worked on her Santa Face Window and is moving along quickly and efficiently with it.  With the beard all cut out and fitting together nicely before it even goes to the grinder, I'll safely state for the record that she'll be completing this window in record time. 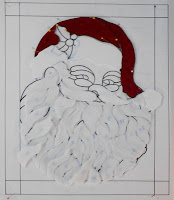 Mary has gotten so very far along on her Octagon Iris Window this week.   With all of the pieces ground and fitting together she was able to begin the wrapping process.   As you can see her foiling looks great and it's going make this window really stand out when it's completed. 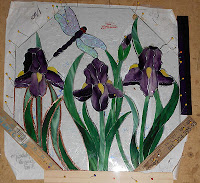 Barbara is student number 2  who has begun work on a small Mother Mary Window as well.  She's got most of the glass cut out and will very likely finish cutting and grinding this when she returns.   This is one popular design and even in this unfinished state it's easy to see why.

Terry spend the night working on these tediously small circular Poinsettia Ornaments.  Each 5" circle consists of 19 pieces of glass! That's enough to drive ME crazy!  But Terry is just about set to solder all of these already.

Betty not only completed her Rose Window-- she also worked on a large Angel Suncatcher and a Virgin Mary Window.  She took my 'preaching' to heart while working on Mary and made sure she cut off the blue line then she spent just an hour and twenty minutes grinding it all to fit.  That's excellent!

Susan D was so very close to completing her Santa Lawn Ornament this week that I hated to see it walk out the door unfinished.  The only thing left to do on it is to solder the second side and then add a stake.   I find it interesting that Susan shares my habit of 'priming' her Sharpie Ultra Fine Point markers on the side of her pattern before she starts drawing on her glass.   Her patterns look just like mine with all those little squiggles surrounding the subject! 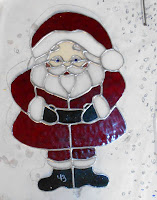 Linda F also began another project this week and as you can see it's a Christmas Bell with a Green Ribbon.  Why not a red ribbon?  Well, Linda is a green kinda girl, that's why!  She's going to do the bell clapper in solid lead which will be a nice added touch. 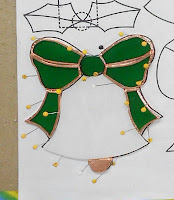 Mary Grace got  all of her Tree Of Life Window foiled while she was in class this week and by the time she left it was all tacked together as well.   When she comes back in she'll be able to start cutting her multicolored border. 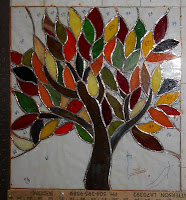 Myrt only has to wash and patina her Ribbon Bordered Fleur De Lis Window and that will take less than 15 minutes when she comes back in next week .  That means that we'll not only see this completed but we'll also get to see her start a new project when we return. 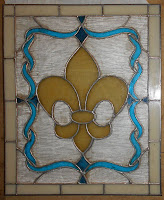 And Susan R didn't simply complete her Pumpkins and Corn Window, she also began a new project which is a Stained Glass Present Box.  When this is completed she'll fill it with lights and have a wonderful decoration for the table.   It's hard to see now but just give it some time and you'll fall in love with it-- I promise.

Shelley now has all of the glass cut for her own rendition of the Tree Of Life Window.   This week we saw her worrying so much about being able to get all of her background pieces separated after they were traced onto one sheet of glass only to have then  separated and completely cut out in under 15 minutes.   The moral of this story is to stop worrying and start cutting!  She was also worried that her Tree wasn't very bright, but it certainly is! 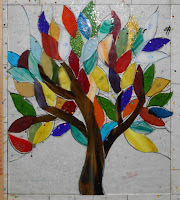 Cindy is also working on a Santa Face Window and she's starting from the top down.   We were out of white when she was in class but the new glass shipment arrived the following day and Santa now has white glass for his beard. 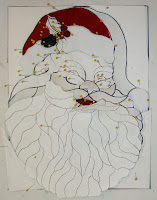 Lastly,  Melissa worked on more crosses but she ran out the door before I was able to get a picture of them.  The nerve of her!!!   I promise we'll see what she's doing when we next return.