It's Down To The Wire


This week we're going to discuss a pattern's 'aspect'.  Aspect ratio's are always involved when drawing patterns and it's something that few people think about so I figured it's time to touch upon it here.  When choosing patterns it's very important that the window you want to make is close in measurements to the finished size that you will need.

Let's take the following pattern for example.   It's a square window which measures 24" x 24". 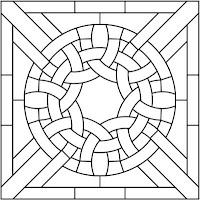 If you needed to resize it to make it 36" x 18"  you'd end up with the following pattern.  Sure it looks fine as a pattern but it only bears a passing resemblance to the original design.  If the person you were drawing this for was expecting a circle in the center they'd surely be disappointed. 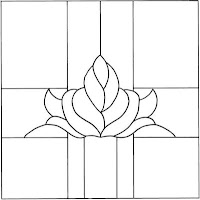 Lets change this on even more drastically.  If we need to resize it to 48" x 12" (twice as wide and half as high) we get the following pattern which again is usable but it's very obviously stretched.

Below I've kept the center flower the same size (the same aspect ratio) and just cut off half of the top and half of the bottom.  Then I extended the lines on both the right and left side so the window fits within the measurements required without changing the aspect ratio of the flower in the center. This is much better than the pattern above, don't you think?

Since our first example features a design that runs out to the edges of the pattern, a major redraw would need to be done to make it acceptable and even then it would still vary greatly from the original.

So, if you need to scale something to a certain size you need to be sure that the original pattern is close to the same aspect ratio of the size you need it to be.   Also, if the design extends to the borders, you will certainly be facing even larger problems especially if it involves flowers or animals.

So with that out of the way let's have a look at Linda F's Victorian Themed Window which is certainly a beautiful design that has been marvelously executed.   The symmetry is spot on and her soldering is nothing short of amazing.   Gone are the days when I'd touch up Linda's soldering.   Her use of Cathedral Glass throughout the entire window really makes it sparkle when it has light behind it.  (Referring back to our tip- imagine this window half as high and twice as long.  Let me say right now that it wouldn't be pretty.) 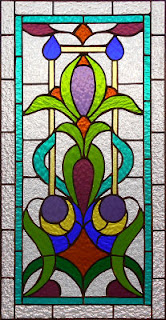 Patrice's Sunflower Window is  technically the first window that she's made all on her own and let me say that it is gorgeous!  She's done a spectacular job all around on this and I already know that we'll be seeing some incredible projects being made by her in the weeks to come. 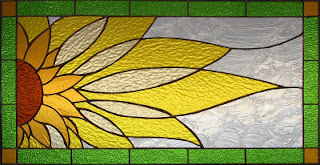 Roy's first window was done in record time and looks like a seasoned pro made.  Windows consisting of straight cuts are among the most demanding projects since any variation in those straight lines are easily seen by the eye.  That said, Roy's Cross Window is perfection.   Up next for Roy is a Hummingbird scene and we'll see what that looks like when he returns next week. 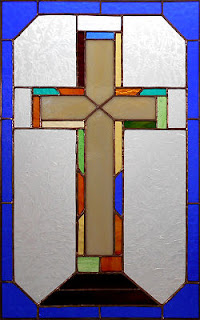 Jan put the finishing touches on her plate window and it is striking indeed.  I worried a bit about filling in some small holes that surrounded the plate but they filled in with solder without a chance of anyone noticing even after I've pointed it out.  In the end it was best to NOT fill them with glass.   Jan's window has inspired another window that will be very similar yet very different as well. 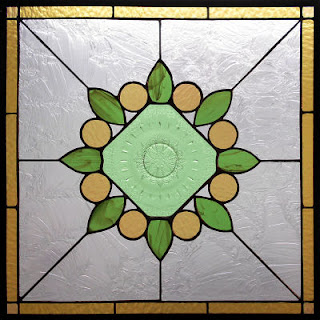 Angie finished her Bird Of Paradise Window and it's one that always turns people's heads.  She has a fish window cut out but it wasn't tacked together yet so it was difficult to transport to the shop.  This window is a very portable size so she finished it with the hopes of having her next window ready for a border (or two) when she comes back in. 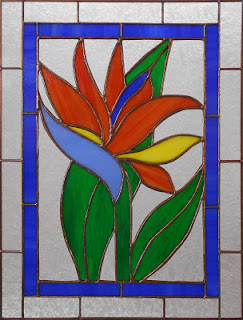 Betty completed her Sunflower and Bee Window this week and did a great job with the soldering.  I can honestly say that not a single touch-up had to be done on this.   After some hooks were attached Betty washed and colored her window so that it could be ready for its picture among our completed windows this week. 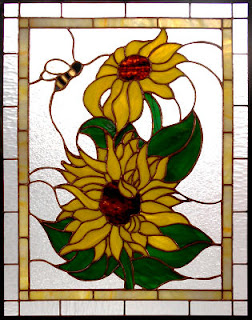 Brenda completed her first of 2 Beveled Transom Windows and does it ever sparkle when it's got some light behind it.   In this rare instance the camera was able to catch all of the facets that the bevels introduce to this elegant piece.

Linda L has all of the glass pieces soldered together on her five Dancer Suncatchers and she's only got some wire work left to go on these.  She's got her copper wire  ready and next week these will be on the final assembly line!

MiMi has started a new window and it's a stylized rose design that MiMi is knocking out quickly and efficiently.  This week she traced her pattern onto poster board and then cut that poster board pattern into its respective pieces.   From there she traced the petals onto some pink glass and even managed to get all of that pink glass cut out as well.  Since this window consists of large flowing curves (in contrast to her last window) I suspect that she'll grind this fairly quickly.   As you can see she's having no problem cutting it. 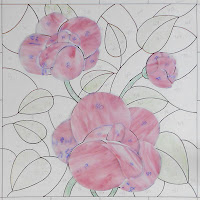 Lara now has all of her background glass attached to her Indian Headdress Window and I can honestly say that she's doing another  great job with this.   She's also got her thin inner  border cut and ground so that means she's just about ready to get that final border cut and attached.   She'll be soldering this before she knows it! 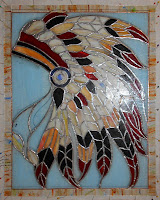 Mary Grace now has all of the green cut out for her very large Iris Window.  As I said last week, you can really see what this window will look like now that all the green is in place.   There's just the background left to cut out and once that's done then Mary Grace will begin grinding this beast! 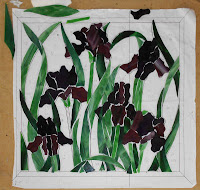 Cindy has begun work on another Birds On A Wire Suncatcher.  Calling this a suncatcher is a bit of a misnomer since it measures about 18" wide, but there is no background so you certainly can't call it a window.  Nonetheless, it always turns out to be a best seller for Cindy and this one will be  no exception I'm sure.

Terry began working on a plate window of her own but this one is more plates than glass!  Utilizing four clear textured plates and a small bit of cobalt blue background glass this is a window that will sparkle in a VERY attention grabbing way.  Oh, and there's a small round bevel in the center with a double ring. 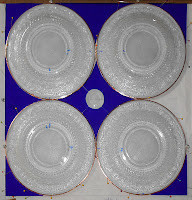 Beth resumed work on her two Crosses this week and she's got them both ground with one of them being wrapped in copper foil as well!   She's taken the remaining unwrapped pieces home with her so she should be able to begin soldering these two crosses when she comes back in.  I have a sneaking suspicion that these will be completed very soon next week.  After that she'll be able to start a third cross (in yet a different style).

Shelley's Chef Window is all ground and this week she's begun wrapping it.  She cut the buttons into the front of the chef's apron AFTER it was all ground .   We handled it the same way I demonstrated in our tip last week about the Owl's eyes.   The next time Shelley needs to use this technique she'll be ready for it. 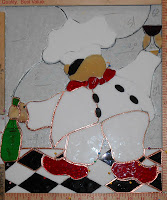 Martha has all of the face section of her Deer Window ground and next week she's going to start on the antlers.   If you look VERY closely you might discover where her background glass had a slight break that she'll cover by enlarging two of the antler pieces.  It's far easier to handle it this way rather than re-cutting the expensive and very thick piece of background glass which could very well break again.

Myrt now has all of her Fleur De Lis Window cut out and tacked together. All but the border, that is. She's already picked her glass and the strips are cut, ground and ready to be wrapped (I just don't have a picture of the border!)  Next week she'll begin soldering this and there is a distinct possibility that she will have it finished before the night ends.

Susan R has all of her Pelican  ground and has even well begun the wrapping process.   She also spent some time working on the small fish that acts as a pull for the wings on this piece.  When she solders this she will solder it as 4 separate suncatchers-- the body, two wings, and the fish.   And once they're soldered this will go together fairly quickly. 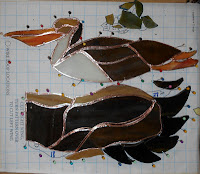 Tracey has her Cardinal window almost completely tacked together and she's about to get the birds feet cut out as well as the branch that they perch on.   Since she didn't have pattern pieces for these we left them blank and will now trace them from the opening that has been left behind.  With her border all cut and ground  she'll easily be soldering this upon her return.

Melissa has just about all of the glass cut for her Geometric Window and next week we'll go into detail about how she's cutting her final border sections the easy way.  She's been concerned about her color choice for the outside edge but I think this all goes together beautifully. 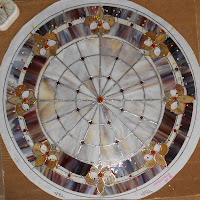 Rowena  worked on this Cross Window and is all set to attach her border.  That can only mean that this will surely be completed when Rowena returns because she can make short work of the soldering process. 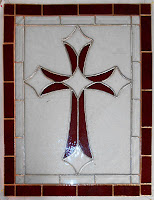 Barbara H has begun soldering her Tulips Window and she's already got the front side finished.   In fact, when she comes back in she may very well have this completed because she's taken it home with her to hopefully solder during the week depending on how the soldering looks, she may be bringing it into class for the last time. 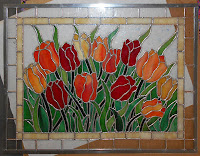 Susan D made great strides on her Peacock Window this week and now has all but 11 pieces ground.  Once this is wrapped and tacked together she'll cut out her background glass and decide how she wants to handle the Peacock's crest. 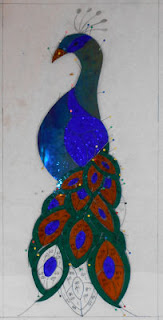 Betty also started work on this LSU Tiger Claw Window which always confuses students when they make it.   Because some of the subject matter cuts into the multiple borders we tend to see people cutting everything out at once which is the trap that Betty fell into here.   We ALWAYS  ignore borders until the subject itself has been cut, ground and tacked together.  Cutting borders first makes things become far more difficult because adjustments can't be made and all other cuts need to be perfect.  That said,  Betty has all of the skill necessary to complete this window and make it look great-  She just approached it from the wrong direction.

Here's Brenda's second transom window well under way now.  Next she'll add the background pieces and then tack it together for its final border.

Lastly, Becky S has begun cutting pieces for her seahorse window but she got out the door without my getting a picture of it.   That won't happen again next week-- mark my words. 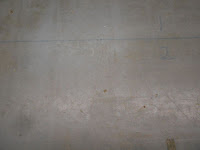 So that's it this time around.  We'll see you again in 7 days!