The First Cut Is the Deepest

Our tip this week is simple enough yet often ignored.    BE GENTLE!  When working with glass the more pressure you apply to it the better the likelihood is of it breaking.  And this applies to ALL aspects of your glass work.  I've watched people press down so hard on their marker while marking the glass that the point turns into soft, messy q-tip by the 4th piece.  Be gentle.  If you have to work hard at any point during the glass making process then you are surely doing something wrong.

Sadly,  Beth got skipped last week because with all the drama that occurred with her window the week before I forgot to take a picture of it.   Normally I'm not that forgetful but the drama was caused by my mis-sizing her window which meant that it was too short for the frame she was putting this into!   I was angry at myself for making such a rookie mistake but luckily, in the end, we were able to work it all out and ended up with a perfect fit.  We have a picture of the completed window as it left the shop and then we have a beautiful picture of it installed in its iron frame and hanging in front of Beth's house.  Beautiful work all around makes this a VERY pleasing window indeed! 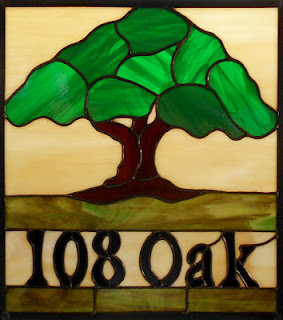 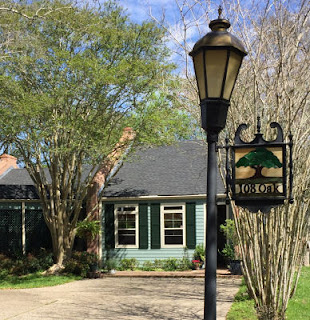 Shelley got her Tree Of Life Window completed and it certainly is colorful.   I'm pretty sure she was worried about this being too plain at one point in time but as you can see from the picture this is anything BUT plain.   I really have to hand it to Shelley-- her soldering is VERY smooth indeed. 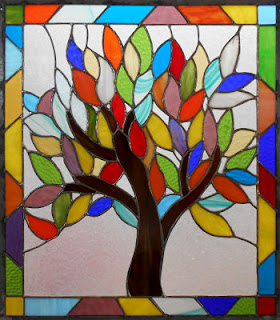 Terry completed the work on her Traditional Stained Glass Window and the symmetry she accomplished is nothing short of perfection.  The colors, the craftsmanship, and even the design itself all lend themselves to the beauty that this window radiates. 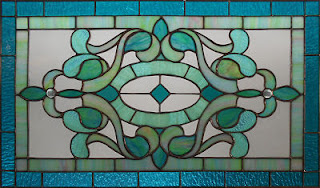 Angie's completed her Magnolia Window and did she ever make short work of that!   This is only two weeks in the making and she's ready to begin something new already.   Angie is fast becoming one of our most productive students.  It's hard to believe that she started with us as a Weekend Workshop student. 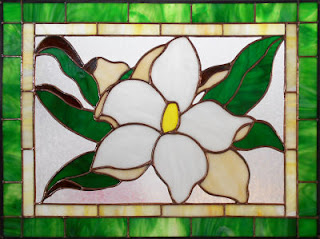 Cindy has spent the past few weeks working on a lamp repair and although I normally don't picture repairs I just had to show you the fruits of all of Cindy's efforts.  Here's the thing about this repair-- every single piece of glass that makes up this lamp was un-soldered, un-foiled, cleaned, re-foiled, and then reassembled so that the lamp is complete again.  Yep, every single piece.   Amazing. 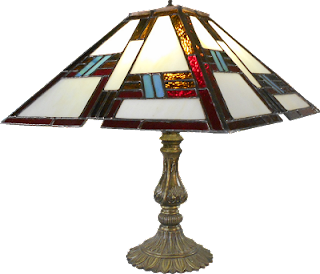 Terry also worked on this beautiful Monogrammed 'H' Window and it certainly has a flow about it.  There are no sharp points in this as all her curves move gracefully across the glass.   In fact, it's so perfectly ground that I thought it was a color printout at first! 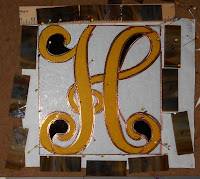 Roy is our newest student and he's already been cutting glass on his own at home.  Because of this we skipped the butterfly that we almost always make our new students make and just started off with a quick glass cutting lesson.   I've found that most people who come in knowing how to cut glass only know the technique without understanding  the how and why glass breaks as it does. About a half hour later when we were finished with the cutting lesson Roy was thrilled with his newfound knowledge.   After that he began working on this Cross Window that he had drawn up on his own.   He's cutting glass with the greatest of ease noow and hopes to come back in with a major portion of this completed.

Mary Grace got a lot of the flower petals in her large Iris Window cut out this week.   Alas, she's running out of glass and incorporating new shades of purple in her design which will only make this look even more colorful and realistic.   When cutting out your pieces it is always best to trace all of the pattern pieces onto the glass before cutting the glass.  This results in far less waste and the ability to get more pieces out of the piece of glass. 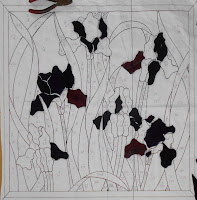 Tracey has her Cardinal window almost completely ground now.  I have a funny feeling that with just a few pieces left to grind she'll begin wrapping this when she comes back into class next week.

Susan R is working on her 3D Pelican Window and making major progress on it.   Susan already has all but the small fish cut out (which acts as a pull for the flapping wings.)  She even has the bird body ground already so it won't be long now. 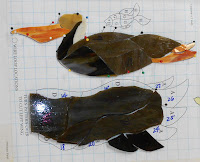 Cindy not only finished repairing her lamp -- she also began working on this 3D Butterfly Ornament which is made up of two butterflies that are joined together.   It's hard to explain but you'll see just what I mean when she completes this shortly.

Wow is Patrice ever moving quickly with her Sunflower Window.   She got it al ground in one class and then started the wrapping process.   There's an extremely good chance that she'll get a border on this when she returns next week.

Linda F  has decided to go with a double border for her Tradition Window and  the first thin accent border is a teal/aqua color that matches two of the leaves in the main design.  One of the best ways to determine the color for a border is to match a color that was used minimally in the design.  With both borders cut I have a feeling that   Linda will be soldering this before you know it.

Barbara H has all of her borders attached on her Tulip Window and is working on filling in the missing pieces.   Once that's done she'll be able to solder but I don't think that will happen until two weeks from now.  There are just too many fill in pieces to complete. 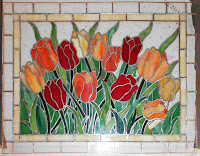 Carol is in between projects and decided to make this quick (for her) Butterfly Lawn Ornament while she was spending time with us this week.  She managed to get it all cut out and ground in just one class and once this is wrapped she'll be able  to solder it and add a stake to display it on.   (Yes, there's a missing piece in the photo-- I forgot that she had a piece mishap and that she was going to replace it at home.) 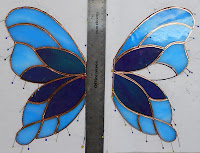 Lara finished wrapping the last remaining pieces of her Indian Headdress and then tacked it all together.  She had picked out a deep blue background and correctly clued in on the fact that I wasn't really thrilled with it.   I hate to influence a person's color choices but when something doesn't look correct to me I do feel the need to mention it.   I tried two other colors before she came in and have to admit that I liked the dark blue better than the glasses I was trying to replace it with.  Then Russ turned up the medium, pastel blue that you see in the picture and everyone agreed, without a doubt,  that it was the best fit. 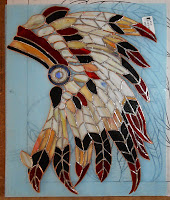 Melissa worked on grinding the 8 small Fleur De Lis that surround the outer edge of her window.   The work is tedious and demanding but Melissa leaped head first into it and is doing a wonderful job.   She's half way to completing the Fleur De Lis portion of this window and once that is finished the rest should be a piece of cake. 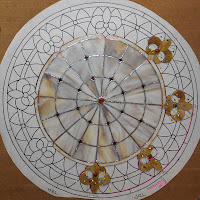 Sheri resumed work on her Tabasco Window and she's really making progress here.  With just the plate, the peppers and a few leaves left to cut she'll be grinding this before you know it. Alas, Sheri is about to have surgery which will keep her out of class for a month or so.   She'll be MIA for a few weeks but certainly not forgotten! 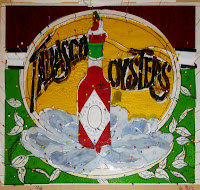 Martha now has all of the glass cut out for her latest Deer Head Window and has even begun grinding her pieces already.   The background glass that she chose is thicker than most glass and that made it a bit tricky to cut, especially when the pieces formed points.  She had  one minor break that we're going to fix by altering the antler by just a little bit on one side and it's that ability to re-design something to cover a break that makes our work in the shop so fun.   We never cry over spilled milk or broken pieces.  We just deal with it in new and different ways!

Linda L's Dolly the Owl is all cut and ground now.  She had a few issues with the getting the small pieces that surround the Owls pupils to fit and then she learned the simple trick of working with a larger piece and then cutting it down.  We'll got into that as a tip of the week soon.

Jan  now has all of her glass cut ground, wrapped and tacked into place for her Plate Window.   I think she will begin soldering this when she comes back in and then when the front is completed we're going to attach the plate itself to the center so you'll be able to see just how beautiful this window is going to be. 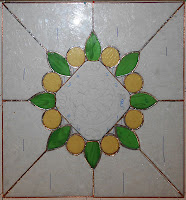 Brenda got her final border attached to her Beveled Transom Window and then cut a zinc channel to frame it all out for stability and strength.  She soldered the front side in record time which means that the second side will easily be completed upon her return.

Mimi is officially ready to begin soldering her Bull/O/Flag Window.   This week she ground the Bull's body to fit and then worked on the few fill-in pieces to complete her window.   She wrapped all of the pieces(!) and then tacked it all together.  I have absolutely no doubt that this will be completed upon her return.

Becky S is starting a very intricate Sea Horse Window and she drew out the pattern in class this week all the while making little changes here and there.  There were more than a few superfluous lead lines in the original pattern but the one that Becky is now working from is lean and mean.   She's got a great deal of her glass picked out so we should see her cutting out glass upon her return. 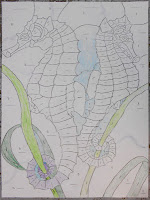 And Myrt was off at an Alcohol Club Meeting this week but she promises to come back to us next week.   Or was that the Garden Club that she went to?  I love to tease but I honestly hope she had as good a time as we did on Tuesday night.