Although we've covered this once before it's a very important tip so we're repeating it again.  While grinding it is important to trace a line using another piece of glass as a template.  When doing this make sure that the point of your marker is angled inward towards the piece you are tracing.  If you angle it the other direction the line will be off and you'll cut your piece short which results in gaps throughout your window. 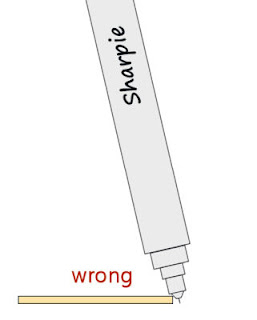 Below is the correct way to angle your marker to get a line that not only matches the piece you are tracing from but also allows you to get a perfect fit on the first pass without gaps. 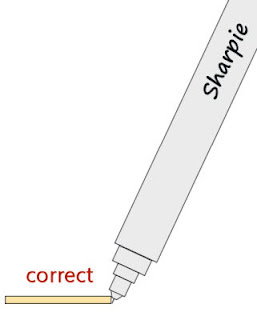 Moving along to our students I will say that technically this is MiMi's third window with us but it's the first window where she did all of the wrapping, grinding and soldering herself with no teacher intervention while she was working on any of those processes.  This window is all about curves and MiMi did a fantastic job making everything fit together perfectly and curve elegantly. 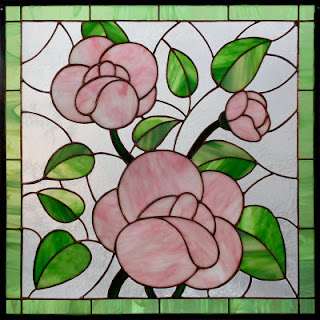 Jeannette wrapped up work on her latest Beveled Window that was made from two different shade of solid gray glass--  A lighter gray for the background and a darker gray for the final border.  You have to admit that the end result is striking.  Further on down you'll see that Jeannette is working on another one of these beautiful windows. 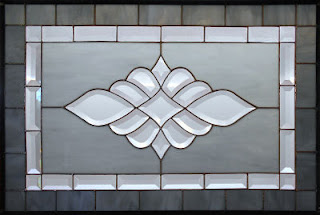 Beth has been a very busy woman!   She came into class this week with a second Iris Window all cut and ground and then spend the night fixing a few minor issues, wrapping her pieces, and getting border cut out.  She's hoping to finish these next week and I say "Let's go for it!"

Shelley came in and started work on one of the nicest Cat Windows I've seen.  This is a tribute piece because Shelley lost one of her cats last week and she wanted to do something to memorialize him.  She's made a few adjustments to the pattern to allow it to match her cat better and I have to say that this already looks great. 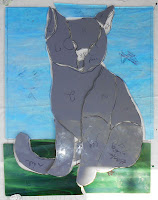 Roy has the stained glass fever and I know this because he's printing out his own patterns, cutting all of the glass and grinding it all while at home!   This Heron Window has only about 8 pieces left to wrap before he starts soldering it and he told me that he'll get that accomplished before he comes back in. 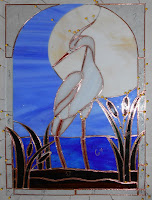 Terry's latest window is anther Geometric design that she's cut from glass using only one quarter of the pattern.  I love that so many students are recognizing repeats within their windows!  With the center piece all cut and ground Terry will be able to wrap and tack this if she wants.

Cindy was all set to start working on a small circular Shark Logo but then a relative called and requested a window for their bathroom vanity.   The window is all cut, ground and wrapped so Cindy will be finishing it when we see her again in two weeks.  Although it's hard to see Cindy does have the paper pattern to her Shark Logo all cut out and ready to go as well. 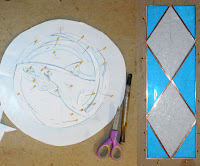 Rowena is making a Victorian Window design that incorporates rules from geometric Windows.  She also recognized almost instantly that she could just trace out just a quarter of this pattern and then cut 4 pieces of glass from each paper pattern piece-- two on one side and two reversed.

Susan R is in the middle of making her own Owl Of Many Colors and she's using techniques that I've posted here in the blog.  Give that woman a gold star!   Now that she's almost finished wrapping it, there's a chance it will be finished when she comes back in.

Lara is in the midst of making what I think is going to be a very interesting window.   It will consist of three long sections repeated three times (similar to Frank Lloyd Wright's Tree Of Life Design.)  Since the majority of this is background glass all Lara has to cut out initially are the top and bottom panels.  We'll see how this all works out as her work progresses. 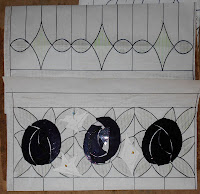 I have to say that Mickey Mouse looks downright terrifying without a nose.  Needless to say, Linda L will get that nose cut into her Mickey Mouse when she returns to class because I don't want to look at him like this any more for fear of nightmares!  He's like Mickey Voldemort (only happier). 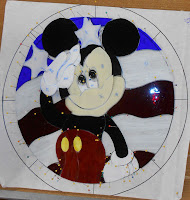 Patrice's 4H Clover Window is all cut, ground, wrapped and tacked!   Before class ended Patrice was able to get channel on it as well which means that she's going to be putting a final bead on this when she comes back to class.   And since this is mostly straight lines I think she'll move quickly on it. 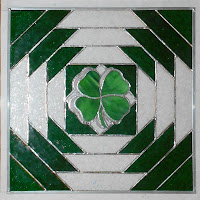 Mary Grace is making steady progress on her Iris Window and will soon get to the wrapping phase of this large window.  There are still more than a few pieces left to grind but she knows what she's doing so it won't be long now.  She's not thrilled with how long this is taking her but I know she'll be thrilled when she hangs this. 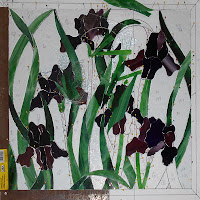 Martha has all of the borders cut for her Deer Head Window and even got the first one attached before she left class.  With all the pieces now in place she'll begin soldering this when we see her again. 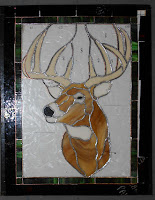 Melissa is so very close to having her Geometric Window completed!   With the final border attached and the front side soldered the only thing left to do is to affix the round zinc channel (which we curved before she went home).   She plans on having the back side soldered when she comes back in and I have full faith in the fact that she will walk out the door with this as a completed project when she comes back in next week. 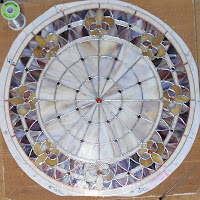 Although we only had two windows completed this week it looks as though next week will be a busy week when it comes to completing windows.  Susan D's Peacock will likely be among the finished windows because she accomplished a lot on it while she was in class.   The front side is soldered and she has the majority of the back side completed as you can see in the picture below.

Jeannette had all of her bevels wrapped for her second bevel window and made short work of tacking the bevels together and getting the background cut and ground.   There's only one border left to go on this and then she can begin soldering it.   The interesting thing about this window is that it was made from the same colors as the one she completed last week (see the beginning of this post).   It's a perfect example of how different a window will look when it actually has some light behind it.

Barbara H made the most of her night with us as she ground her Sunflower, tacked it together and then got the first border attached as well.  She's going to add a second (final) border to this when she comes back in and it will be cut from the same glass that she used for her background. 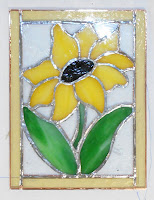 Lastly we take a look at the Hummingbird Window that Carol has started.   This will have a beveled inner border featuring two bevel clusters in opposing corners.  Because we've been having difficulties with beveled borders fitting, Carol has her border already tacked together. The pattern itself was drawn within the perimeter of the bevels assuring a perfect fit.  It just makes things so much easier down the road.

Even though we didn't see many completed projects this week we had VERY busy classes since everyone was trying to get to a point where they could continue working at home of to just come into their next class for a relaxing few hours of soldering.   Come back next week and see what happens next with each of these projects and a few new ones as well.