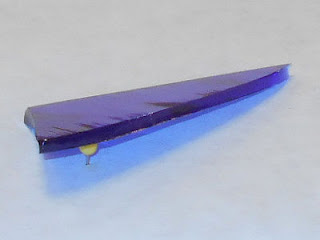 Here you can see the front edge has been ground but not nearly enough.  Although there are sections that have been touched by the grinding wheel (they appear white) it isn't a thorough job.  You will still have problems getting the foil to lay flat along the glass and there's still a possibility that the glass will crack when the lead is applied.  If your glass looks like this you might want to try reversing your piece by putting the top side down on the grinder and going over it again.  Sometimes that makes a big difference especially when skimming borders. 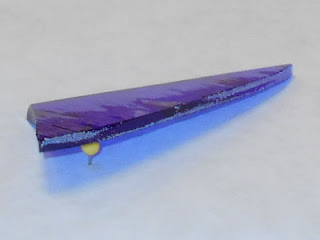 Lastly we have a properly ground piece of glass.   The edge is completely white, the foil will stick to it easily, and the odds are far better that the piece won't crack due to heat.  If all of your pieces look like this before you foil your window I can guarantee that your finished window will be sturdier than if the pieces were just lightly skimmed. 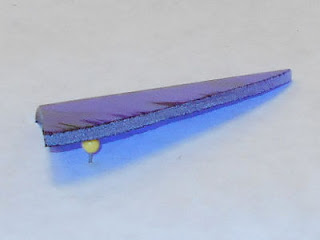 So with that out of the way lets move along to the work that our students have done during the past week.

Although Melissa believes that this window is long overdue, I have to repeat that I ALWAYS stress quality over quantity.   It may have taken about 4 months to make this but look at the level of detail in it.   Also, almost everything she did on this was done in a new (and exciting?) manner.    Repeating patterns are very tricky so this was worked on from the inside out and as each section was completed it was tacked together so nothing could shift.  The end result is this perfect window that looks so much better than the window that Melissa originally saw online.   Melissa should be very proud of it because I certainly am of her.  I couldn't have made this any better myself. 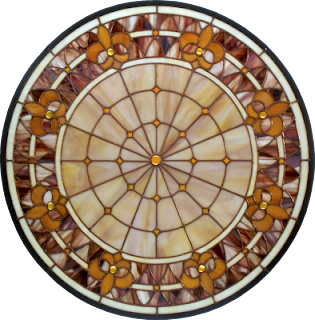 Susan D's Peacock is beautiful and even more importantly, it's a milestone for her.   She's designed this window from start to finish on her own and then constructed it by herself as well.   I cut the lengths of zinc channel for her but that was it.   This window is a stunning victory for Susan all around. 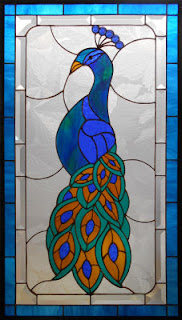 Roy is moving faster and faster on his windows and he completed this one on his own as well.   He's only into his second set of classes with us but he achieves the majority of his work while at home.   This window is smaller than you may assume which means that Roy now has experience with any window makers greatest bane-- tiny pieces.   Alas, everything is perfect here and the fact that Roy is always challenging himself means that his stained glass skills are growing quickly. 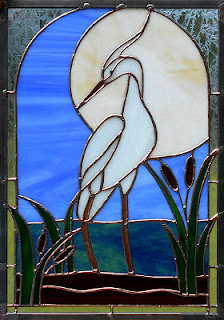 Susan R's Owl Of Many Colors Lawn Ornament was made almost entirely of cathedral glasses (save for the eyes) and as a result it really sparkles in the sunlight.  In fact it sparkles so much that the pictures I took of it out in the sunlight had too many 'hot spots' (places where the reflected sun would create white spots) for me to use.  Susan certainly did wonderful work on this as you can plainly see. 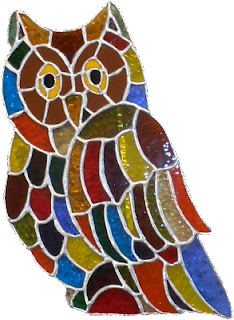 Rowena completed this stunning Single Sunflower and had no problem dealing with the irregular border that the curved corners created.     This was also made out of all Cathedral glass and the end result, like Susan's Owl, is vibrantly stunning. 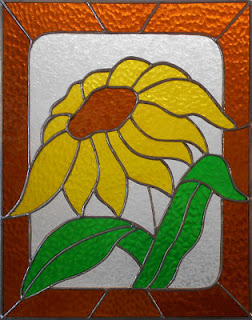 Our second Sunflower this week was made by Barbara H and it's more of a panel rather than a window.  What's the difference?  Well, it is basically about size.  Once a window is smaller than 1 square foot we tend to refer to them as panels.   Please don't think that means they are easier to make though-- the contrary is usually the fact because smaller pieces are always more challenging to work with.  Also, it seems that once someone uses a double border they just can't stop using them and Barbara appears to be no exception to that rule. 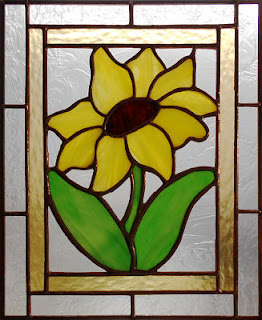 Carol texted me a day or two before class and asked if I would be offended if she used a different hummingbird in the Flower and Hummingbird pattern I had drawn for her.   I said, "Certainly not," and when Carol showed up she had a new (and far superior) hummingbird all cut and ground.   While she was in class she cut out her background glass and she's now grinding it to fit within her beveled border.

Lara has begun working om her 'Flower of Life' Window and has the first of three flower panels all cut out and ground.   This will be a fairly large window but most of the cuts will be straight lines which will be cut from one sheet of glass so that everything fits together perfectly.  We'll see that happen in the weeks to come. 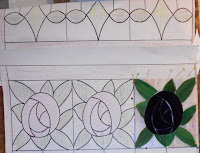 MiMi has the flowers and the leaves all cut out in her second Rose Window.   She's deciding on what background glass to use but once that's done she'll make quick work of this window.  Alas, Mimi has cut her finger and will be taking a short break from this project until it heals.   Mark my words though-- this is going to be beautiful. 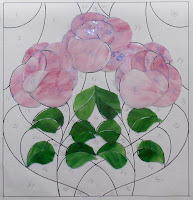 Shelley has begun grinding her Cat Window and she's already got the lower pieces fitting together nicely.  When she returns she'll get to the face which is the most important part of any window featuring an animal.   All she's going to need to do is take her time and then the face will balanced out easily. 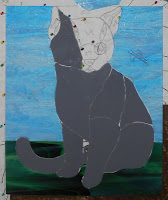 Linda L has all of her Rose Heart ground and has started wrapping it.   She's also working on a Stylized Cross of her own using the remains of some Fractures And Streamers glass that she had leftover from a previous window.   I think the use of that glass will make this cross really stand out.

Betty has each if her three arms working on a different project.   She's got a large Cross Window just about ready to be soldered (once the border is attached), a Fleur De Lis Window that will be hung as a diamond rather than a square, and a Stylized Cross Suncatcher of her own done in a monochromatic 'color' scheme. 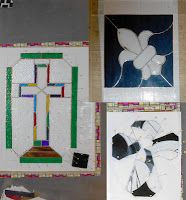 Rowena was also hard at work on her Victorian Themed Window and it looks to be as elegant as any window could ever be.  After wrapping and tacking the center piece Rowena cut out her background.  Once she has that tacked into placer she'll only need a border and some solder to finish this off.

Each week Mary Grace's Iris Window gets closer and closer to being ground.   I know she thinks this is taking forever but when you tackle a window that's 3 foot by three foot it's going to take a little time to get it done.  Still, with each passing week we see major progress.  Next week I think MG will take a bit of a break and start wrapping her pieces to help ease her weary mind. 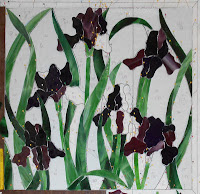 Ok then, Linda L's Mickey Mouse is looking MUCH better this week.   You can see that he has a smile on his face which helps, but it's the addition of the nose (which she ground into the center of a solid piece of glass) that really make him look 'human' (for lack of a better word). 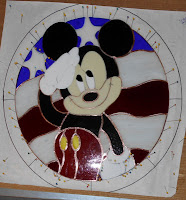 Martha is officially tacked together (well, her Deer Head is) and she even has her channel in place.  She's begun soldering so it shouldn't be long now before she hangs this and moves on to her Beveled Lighthouse and Sailboat Window. 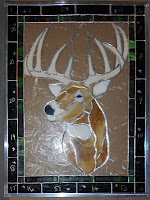 Trace has just begun a large Address Window and that means that this week she traced  and cut out her paper pattern pieces.   She's also got  a lot of those paper patterns traced onto sheets of glass so she'll  be cutting actual glass when she comes back in to class next week.

Lastly we take a look at the Crab pattern that Roy is starting to work on.  He has his glass all picked out and I suspect we'll see this well under way when we next see Roy. 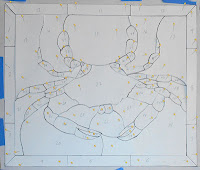 And that about wraps things up for this first week of May!   Where IS this year going??