Our tip this week is simple but oh so important.   When you mark a piece of glass with a sharpie marker you should give the marker at least 30 seconds to dry on the glass to help prevent the water in the grinder from washing it away.   What I do is mark a piece and then grind the line off of the next piece I plan on working on.  Once that next piece is ground I know the line has set on my first piece and that it will stay on the glass longer as I work it into shape.

Well now, Patrice's 4H Clover Window certainly turned out to be something that really catches your eye doesn't it?.   The intricate three layer border system is almost an optical illusion.  Patrice is really catching onto this whole stained glass thing, don't you think? 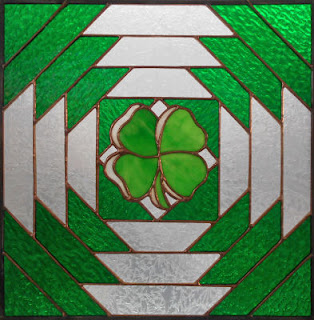 Betty's Diamond Beveled Window is stunning indeed and that's because of the unique way that it hangs.  Sometimes you have to put a new slant on old things to make people turn their heads, and that's exactly what Betty did with this piece. 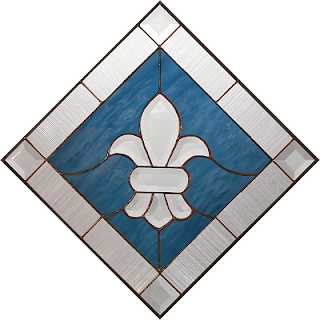 Beth completed this Celtic Knot Cross and has decided that she likes them so much that she has two more in the works.  This one turned out lovely indeed and I can't wait to see what color crosses she brings in with her next week. 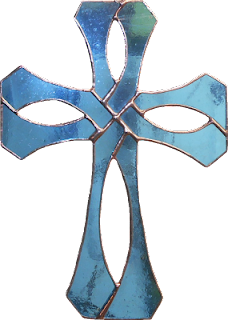 Cindy actually completed her Medicine Cabinet Insert but there's not much to see.   Because it will be mounted into an opening with a finite amount of space we've forgone the channel which would make this sturdy enough to lift and photograph nicely.  Thus we have the picture below.  It still looks great though! 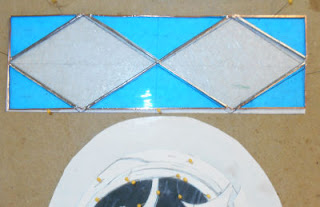 And Jan was back with us this week and she's been busy wrapping the pieces to this deceptively tiny Jesus Window.  With just a few pieces left to go I think we'll see this get a border cut for it when Jan returns.

Becky's back and she's getting her Seahorses fitting together perfectly.   She's got a great portion of this ground already and the pieces are complex indeed.  Becky certainly enjoys a challenge though and that's probably why this is looking as good as it does already. 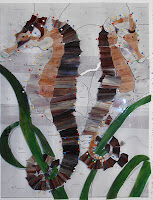 Beth was upset with how this Iris Window was turning out and was all set to put it aside indefinitely, but after a little coaxing we were able to fix the problem areas and get this ready to be soldered.  I think it's rather nice! 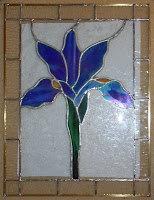 Betty's got all of her Cross Window cut out and learned a valuable lesson while making it.  She used cathedral glasses in this project and wanted all of the textured sides to be on the front of the window.  To do this she reversed all of her pattern pieces before tracing them out on the smooth side of the glass she used, but there was really no reason to have to go through all of that trouble when she could have easily just make the window as normal and then hang it with the back side forward!

Tracey is working fast and furious on her Address Window and she's already grinding all of her pieces.  She's decided to go with a double border on this and at the rate she's moving we'll see those borders get attacked quickly.

Lara's Flower Of Life Window is also moving right along as she now has all but 4 pieces ground on the toughest part of this design.  Once these are wrapped and tacked together she'll work on the bottom sections and after than there will only be background to go. 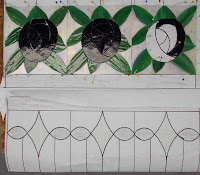 Carol has her Humming Bird Window all tacked together and she even has the front side soldered. I love the fancy bevels in the opposing corners-- they really add a quality to the window that makes it stand out.  If you ask me, there's no doubt that this will be completed upon her return. 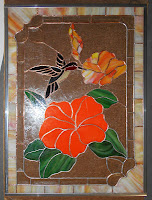 Roy started working on his Crab Window and he's got the majority of it cut out already in just one class.  There are only a few pieces left to go and then he'll be grinding this.  He's working fast and efficiently, that's for sure and I think this is going to be spectacular. 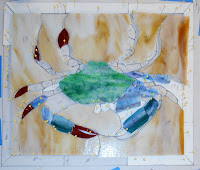 Susan R's Scissors Suncatcher was started today in class and she's about to solder them already.  In just one class she was able to cut the glass, grind it and then wrap each of her pieces.   And speaking of wrapping things up, Susan will surely finish these when we see her again.

Myrt has made some solid progress on her Dog Window and she's thankfully decided to use the third pattern that she traced out rather than the first two.   Myrt will be responsible for our tip next week when we explain the importance of taping your pattern to the poster board that you are transferring it to rather than the carbon paper.  More on that next week though. 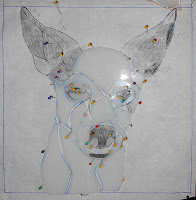 With just 8 pieces left to go, Rowena's Victorian Design Window is almost ready to be soldered.   She'd surely have the border attached already had it been a straightforward border but the center section on this window has curved edges which means that we can't just zip out those border pieces with the strip cutter. Each of the corner borders have to be cut by hand.

Terry's Geometric Window is now officially all cut and ground.  She began wrapping all of her pieces this week and although she has wiggle room between those pieces she's still having to grind key pieces slightly smaller since the foil is making things increase in size.  It's looking great though and I won't be surprised to see her working on something else shortly.

I fell in love with this Rose When I first saw it on the internet and now Linda F has gone and made one for herself.   All the glass has been cut and I hope we get to see this completed when she comes back in because it looks fantastic and I really want to see it hanging with some light behind it to REALLY show it off. 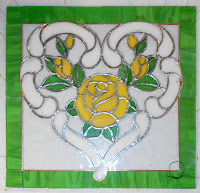 Then Linda L got her border cut, ground, and attached to her Mickey Mouse Window.  When she comes back in we'll get a large Zinc Channel bent around the outer edge to finish this off.   With just a little soldering left to go I suspect that this will be among our completed projects when we return next week. 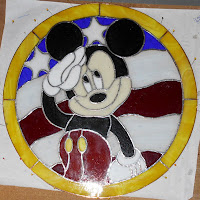 Can you guess what these Suncatchers are that Susan D is working on?  Hopefully you won't need a hint and if you do well shame on you because Mickey Mouse will haunt you forever!

Shelley's Cat Window now officially looks like a cat!  I'm not sure what's happening around the nose but we'll surely work that out when Shelley returns.  In just two short weeks Shelley's almost ready to begin wrapping this cat! 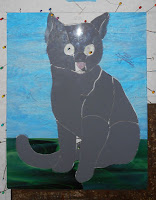 Mary Grace has begun wrapping her pieces and although it's hard to see, she's making good progress on this.   With so many pieces missing the easiest way to wrestle this window into submission is to tack what we have and then start filling in the remaining pieces.  Not only does it make things easier-- it also helps to booster confidence by allowing her to see some serious progress her window. 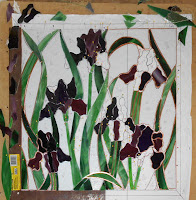 Next we have a look at Brenda's last Beveled Transom Window Insert which is finished save for a wash and then some color.   She'll be coloring the lead black on this window so she'll have a 45 minute wait once the patina is applied.

Then there's Martha's Deer head which is at the same point that Brenda's window is-- all it needs is a bath and then some patina to color the lead.  I think that Martha will be coloring this in copper so the process will go a little quicker for her than for Brenda.

Finally we take a look at the new window that Melissa has begun work on.  She liked the circular shape of her last window so much that she's making this in a circle as well.   These Sacred and Immaculate Hearts are each made up of some tiny pieces but I know that Melissa is more than up to the task.  And the pattern REALLY looks good don't you think? 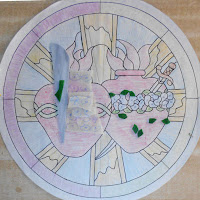 There you have it! All that happened that was fit to print.  We'll see you all again next week when we return with a SLEW of finished windows!!!