Did You Look Under The Biscuit?

Ok, we're starting this post off with an rule that a lot of our students pay attention to but not nearly enough.  Close only counts in hand grenades and horse shoes so when you are lining up your pattern pieces on your glass you MUST be very careful that the grain is exact.   Just being close doesn't cut it as you will see.  Below is a flower and the background grain is perfectly aligned.  Each piece runs at a 90 degree angle (left to right)  and because of that, each background piece lines up perfectly. 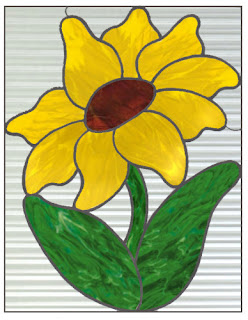 Next we have an example where our grain is shifted to 92 degrees on some of the pieces and 88 degrees on others.  When you consider that there are 360 degrees in a circle you might assume that a 2 degree difference here and there won't really matter, but look at that background.  It's a crooked mess!  It only takes 2 seconds to make sure that your grain is straight.  Be sure to take those extra seconds while tracing out your pattern pieces onto glass because almost anyone can see when you're off the mark. 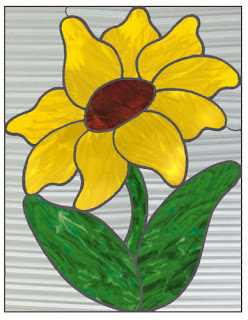 With that out of the way let's move along to our first completed project this week.   Mary started this way back in February but a far too long hospital stay kept her off of her feet and unable to attend classes for months on end.  The good news is that Mary is, for all intents and purposes, as good as new!  This week she completed her Dream Catcher Window and it was every bit worth the wait.  The beautiful color combination that she picked out only helps to expand upon the beauty of this design.  Perfect! 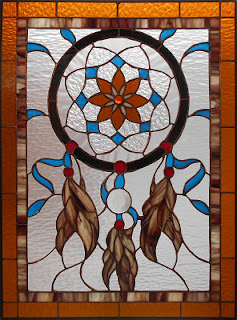 Long ago, and oh so far away, Martha purchased 13 bevels with the intent of making a 3D Beveled Star Suncatcher.   The rest of her class also stocked up on bevels in the hopes of making these stars in class together.   Sadly, other things kept popping up but this week Martha was between projects and decided to throw this together.  I don't think she had any clue as to how fast this would go once the individual bevels had a bead of solder all around them.   I believe that this actually took less than 20 minutes to assemble in the end.  You have to love bevels and this Star makes no exception to that rule. 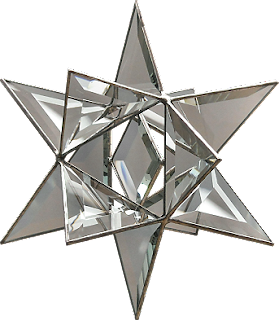 Technically speaking this Lamp wasn't *made* by Terry, but it was completely disassembled, cleaned, re-ground, wrapped and then soldered.   Let's face facts here- this IS Terry's lamp!  Now that it doesn't have that nasty, stretchy lead came semi-holding it together this has become a very beautiful lamp indeed.   And all the credit for that goes to Terry. 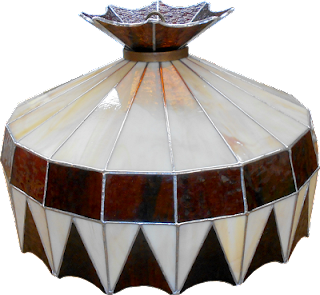 We sort of have a new student with us this week and long time readers may remember her from the past.   Becky B took lessons a few years back and now that she's retired she's back full time.   Rather than starting with a window, Becky had decided to get back on the stained glass horse with a nice easy Cross Suncatcher.   I must say that although it isn't finished yet (it will be next week) she had no problems whatsoever and I declare her ready to work on whatever she wants when she completes this. 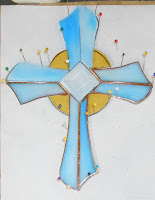 Brenda's Caduceus Window is taking shape and has now become balanced as both sides of the wings have been cut are now in place.   There's just a staff and two snakes to go and with a little luck she'll be able to get them well under way next week. 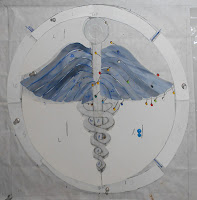 Mary Grace is back in action!  Even though her arm isn't fully working again she was able to trace out and get a good majority of he Birds and Birdhouse Panel cut.   There aren't a lot of pieces left to go on this so I believe she'll be grinding at some point next week.  That's some excellent progress for someone who's still recovering from surgery! 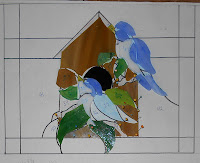 Jeannette came in with a dove suncatcher cut, ground and tacked together and by the time she left class she'd added both a background and a border which turned her suncatcher into a full fledged window.   This is yet another project that will be completed next week upon Jeannette's return. 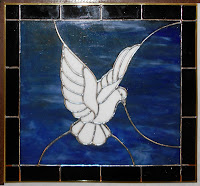 This is Angie's Ladybug and Daisies Window which will also most certainly be completed when she comes back in.   With her borders attached and the front side soldered I have no doubt that the rest of this window will go quickly for her.  In fact, we should get a look at Angie's new project when she comes back in. 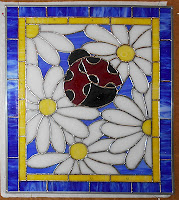 Linda L has her newest Mickey Mouse Window well under construction this week.  The almost three dimensional pumpkin is standing out beautifully due to Linda's wonderful use of color.  Next week I'm thinking that Mickey himself may very well get cut out of glass. 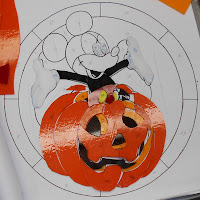 With all but two pieces of glass cut out for her African Woman Window, Lara is about to begin soldering this upon her return.  Inspired from a stained glass mosaic piece, this window brings numerous new styles to a traditional stained glass window. 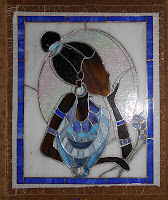 Shelley has begun work on a Regina Mills Window inspired by the TV show Once Upon A Time.  As you can see, the pattern is perfect and Shelley drew it herself!   The face will be painted on using Acrylic Paint and then fired in the kiln to prevent it from ever wiping off, but we'll get to that part in another 2 weeks or so.

Susan R is yet another student who is about to wrap things on on her project.  With the front side soldered, her Woman Emerges Window is very near completion.   I sound like a broken record but this is yet another window with a very good chance of being completed during Susan's next classs. 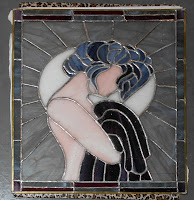 Sheri's Coffee Window is all ground and the wrapping on it is almost completed already.   Sheri is really making quick work of this window and when you see it with some light behind it I'm sure that you will be very impressed with the design.   If you look closely you can see what glass Sheri has picked to cut her border out of.

As you can plainly see, MiMi's Industrial Fleur De Lis is looking extremely impressive!   She's begun the grinding process this week and and can't cut anything else out until she has what she's already cut tacked together.  We want her bevels and borders to be extremely straight and until this is held together with solder that just won't happen.  But she's getting close...ever so close. 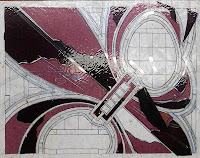 With the second side of her Tree Of Life Window just about soldered, Susan D is just about ready to begin a new project.  And yet again, I have little doubt that the soldering will be finished on this by the time Susan leaves her next class with us.   It's time for Susan to consider what she'll be making next.

Tracey completed wrapping all of the pieces for her  latest Cardinal Window but she didn't care very much for how one of the leaves fit so she's going to re-cut that leaf next week after this gets tacked together and gets its border applied.  I love it when a student sees a problem and decides to fix it rather than letting it go. 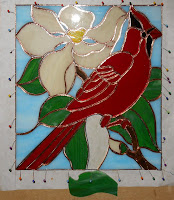 Rowena only has the back side of her Balloon Window left to solder after she attached two borders to it while she was in class this week.   She also cut out another balloon (after simplifying it) and has that tacked together as well.   Look to see one of these completed upon her return.

With just the top curved border left to go on her Rosie the Dog Window, Cindy is very near completing this.   The front side has been completely soldered (save for the top border naturally) so there's a chance that this could be completed as soon as next week! 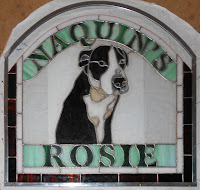 Carol's latest Duck Suncatcher is very nearly completed.   This week she finished grinding and wrapping it and if that weren't enough she even got the front side soldered as well. 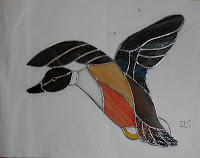 Becky S has started work on a pattern that I drew up about a year ago but never had a chance to make.   It's so nice to know that the time I spent drawing it wasn't all for naught. And I believe she may even be interested in making the companion piece to this.   I know you can't see it right now but next week this will come more alive and then perhaps you'll be able see the Heron that this window features.

Lastly, we take a look at the pattern that Mary has started.   This week she was able to trace out her poster board copy of the pattern and next week she'll start cutting actual glass.  Here comes Santa Clause!

And that wraps things up for the first week of the new month.  It looks like next week will be a very busy week due to all of the windows that are very near completion.   One window that we skipped in this post is Roy's Transom Window but I should get a picture of that for our next weekly blog update.