Corners are the quickest way to tell if someone is new at stained glass or if they've been doing it for a while.  Beginners almost always make windows that have corners that don't line up.  Below you can see that both the green and clear squares are not in line with the rest of their pieces, you can clearly see this when the lead lines are highlighted in red.
The arrows point out the problematic areas.

Next we have a picture of perfectly joined corners.  As you can see both the horizontal lines and the vertical lines that form the corners line up in both directions.

The easiest way to avoid having unaligned corners is to attach the each corner along with the two pieces that touch them on all four corners of the window first (as shown below).  Then you can fill in the remaining border pieces making any adjustments to them along the way.  Once you've mastered corners you're work will always look professional! 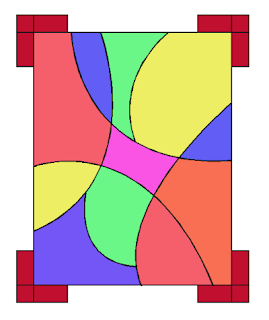 Linda L's 4 foot tall Underwater Scene has officially been completed.   Although the picture is impressive it barely shows the amount of painstaking detail that Linda put into it because of the reduced size of the picture  This window  has pieces as small as 3/8th's of an inch wide in places (I'm talking about you, pieces of coral!) that all fit together with absolute perfection.  All of that tedious attention to detail has paid off in spades though because this window is certainly a  winner as well as having become a major feather in Linda's stained glass cap. 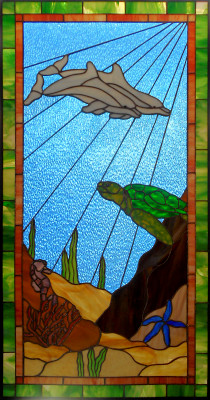 Becky completed the last of her three Frank Lloyd Wright windows and as I promised here is a picture of the three of them positioned as they will be once they are installed.   Becky's attention to detail is impeccable and all of her lead lines are straight and unwavering.    Gorgeous.

Martha finished off a project that one of her friends began in an entirely different stained glass class.   Martha soldered the window and added some channel thus finishing off a project that very well may never have been completed if she hadn't stepped in to help. 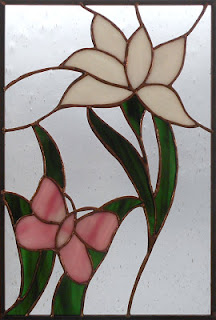 Terry made another exquisite Cross Suncatcher this week and finished it off in no time whatsoever.  She certainly has these down to a science now. 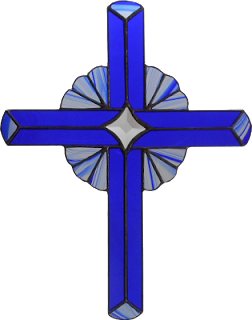 Rowena made two more large Duck Suncatchers while she was home and brought them in for pictures.  Someone specifically wanted one done in LSU colors and that's why she has a gold and purple duck!  I always say that Rowena does beautiful work on her own and these Ducks surely prove it. 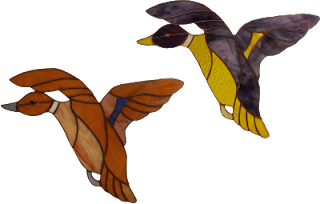 Brenda finished her Aeroscope by adding the axles to her color wheels and then adding the mirrors inside the body of the plane.   The entire process took  less than half an  hour and before she knew it her plane was completed.  She now has her pilot's license! 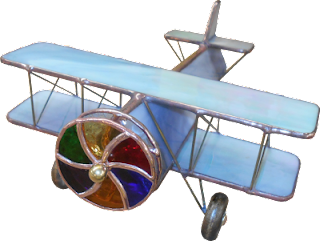 Brenda also begun work on a Caduceus Window and got the pattern traced out and the left side of the wings cut out in glass during her first night of work.   Since she works on her glass while at home I have no clue what to expect when she comes back into class but even if she's unable to get any work done over the week I know that she'll get plenty more completed on this in class. 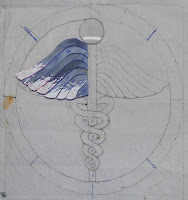 Roy now has all of the glass cut for his large 50 inch Transom Window.  This week he resumed wrapping all of his pieces in 1/4" foil for some extra added strength.  Once the foiling is completed he'll place four lengths of Strong Line between his pieces running the full length of the window to give this long Transom even more support.

Lara completed the background on her African Women Window and she even went that extra mile to grind out the top left piece of background glass to fit around the bun of the woman's hair.  If she didn't do this there would be a wild lead line sprouting out of the bun which I felt would through things off.    Look to see borders on this window when Lara returns. 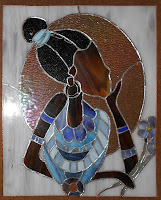 Even though Terry completed a Cross (check it out earlier in this post) she spent the majority of her night working on this huge lamp repair that involved de-constructing the entire lamp and then grinding and foiling each piece so she could reassembling it as a copper foil lamp.  She thought she'd need a mold to achieve this feat but then realized that even though it's large it's still a panel lamp which means that it can be assembled upside down thereby eliminating the need for a mold.  It's certainly looking good to me. 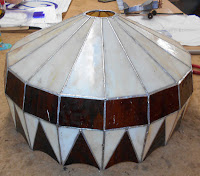 Rowena also managed to completely cut out her Hot Air Balloon Window this week and now she's hard at work grinding it so that everything fits together.   There's a section of the sky that shows behind the Balloon's ropes (which holds the basket to the balloon )that we're going to cut out after this is all ground, foiled, and tacked together.   We want the grain of the glass on those pieces to line up so the sky doesn't suddenly become disjointed in that spot.   The easiest way to do this is to tack the window together and then slide a piece of glass underneath until you get a nice match.   We'll show you an example of that when Rowena gets that far. 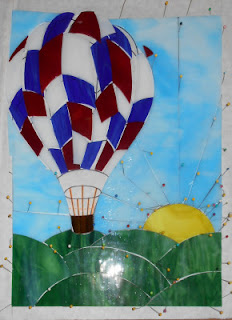 MiMi cut out the clear textured trim for her Fleur De Lis Window and then traced out all of the glass that will be completely covered in lead.  It's these pieces that give this window its industrial look and I know that Mimi is anxious to see just how this process is done. 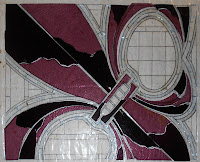 Susan R has her borders cut for her Woman Emerges Window and she even has them attached along with the channel.   As you can see she went with a fancy bordering system which took extra time but was worth the extra work.   Look to see this begin to get solder applied to it when Susan returns again next week. 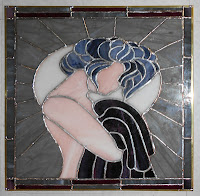 Beth was sort of in between projects so she decided to spend her night working on a Celtic Cross.  She's certainly come a long way from her humble beginnings with us because she sure knocked this out quickly and perfectly.   This is one of many projects that will surely be completed upon her return next week.

Tracey resumed grinding on her second Cardinal Window and she's almost finished with that stage of her windows creation.  She's only got one flower and the bird's head left to grind and since she's taken her window home with her she may very well come in with it ready to be wrapped and tacked. 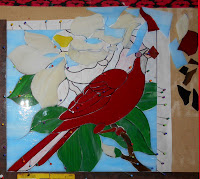 Barbara H  certainly worked hard and diligently this week.   When she saw how poorly one of her pieces fit she took the time to re-cut it and then she decided to finish off her panel with a double border.   She chose a heavily textured cathedral amber glass for the inner and a rich, deep blue for the larger outer border.   This will surely be completed upon her return. 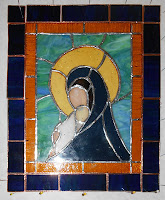 Myrt got the white center round section of her Address Window that contains the number '2' all ground and has begun grinding on the thin blue border pieces that trace around it.  Sadly, this is Myrt's last class with us for a while.   She's having an operation that will keep her away from glass work and once that's healed she'll return to us from time to time as a fill-in student when others are absent.   It's sure going to be strange to not have Myrt in class with her regular gang.  Yep, we're going to miss her.

Sheri got a good three quarters of her Coffee Window ground which means that she'll be ready to begin foiling all of her pieces shortly.  She's working her way through this window quickly and her work is looking flawless.

Mary almost got the entire second side of her Dream Catcher Window soldered which means that she'll surely complete this next week when she returns.   I'm so sure of this fact that I already have the pattern she wants to do next resized and ready for her to start. 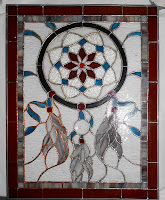 Cindy now has the first border attached to her Rosie The Dog Window and that means that when she comes back in she'll be able to easily cut out the final border and be close to finishing this window.   The curved top may take a bit of trial and error but I have no doubt that she'll have that final border attached before her next class ends. 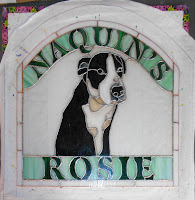 Melissa has begun wrapping the pieces of her Autumn Leaves Window in copper backed foil which tells us that she'll be coloring her lead with copper patina when it is finished.   Now that the grinding and cutting has been completed Melissa will an easier time working on the rest of this window since the remaining processes are far less demanding to do.   From here on out I'm thinking that the remaining work on this will be very relaxing.

Susan D has begun the soldering process on her Tree of Life and I believe I heard her say that it wasn't nearly as hard as she thought it was going to be.  That just proves that soldering can go easily and smoothly if you just take your time while soldering.   It's the hardest thing to teach people.

Carol is working on another Sunflower Lawn Ornament and she got it cut, ground and wrapped in just one class.  Once that was done she began soldering the flat bottom part of the flower which means that she'll only need to add the 3D petals to this to finish it off.  Consider this finished!