She Uses It For Her Eye Lashes

Our tip this week involves bevels and starts off explaining just what a bevel is.  Most of the glass that we use in stained glass is 1/8 of an inch thick but a bevel is a piece of glass that is 1/4 of an inch thick.  That's twice as tall as a normal but that isn't what makes a bevel-- it's the slanted edge that makes a bevel sparkle and refract light the way it does.   This beveled edge is achieved by tapering the glass evenly down to 1/8th of an inch on its edges.  This in turn makes it align nicely with the rest of the glass that we use.  Here's a side view of a bevel.  Note how the center is taller than the edges

As a personal preference I've always used 3/16 foil on all my bevels.  It allows more of the bevel to show by hiding less of the bevel.  The problem that everyone has when wrapping bevels in foil is burnishing the foil so it lies flat against the bevel.   On the bottom you can burnish the foil as normal but on the top of the bevel the tool that you are using MUST 'press' the foil (shown in red on the right side of the illustration) against the glass or the foil won't adhere securely to the bevel.  It may sound trivial, but as I always say, 'Everything counts in large amounts'.  So the next time you wrap bevels be sure that the front angled edge is properly burnished.


With that out of the way let's look at MiMi's window which has bevels in it.  This week we were lucky enough to see MiMi put the finishing touches on her Industrial Fleur De Lis and it sets the bar about as high as it can go when it comes to impressive stained glass pieces.   This window has just about all of the advanced techniques that you can use when making windows in the copper foil method; foil covered glass, cut bevels, soldered channel, pointed cuts, graceful curves, and well, you name it and it's here. A beautiful window beautifully made for sure! 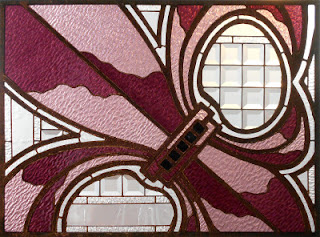 Sheri completed her Poppy Window and the glass globs that she used in the center of the flower really shine (literally).  Her lines all flow gracefully and connect across different pieces of glass perfectly.  This is what we aim to achieve when making windows and Sheri achieved it. Perfection. 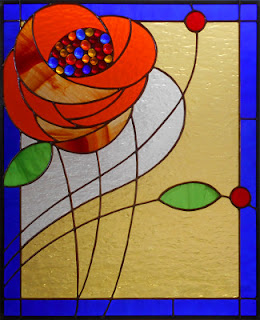 Carol finished this new Easter Bunny Lawn Ornament and already it's the rage.   Two other students have asked for the pattern already and all they saw was the pictures on the camera!  Let's call Carol a trend setter. 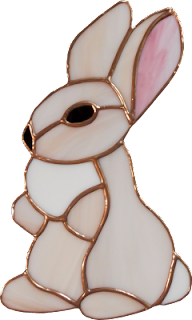 Rowena's LSU Window may be a giveaway, but she still put  the same amount of detail and expertise into each and every cut and grind that she would for a piece that she was being paid for.  Beautiful work all around makes this a window that Rowena can be proud of.

Martha completed this 3D Butterfly Lawn Ornament and I have to say that she did a tremendous job on it.  Look how perfectly these wings fit together and line up.   Symmetry is a tough one in stained glass but Martha knocked this right out of the ball park! 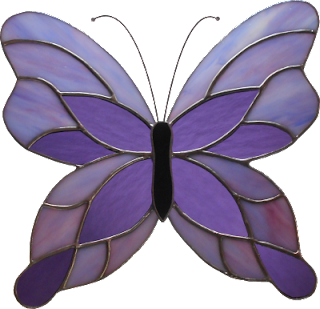 Cindy finished 6 more of her round suncatchers this week and I think that's the end of them for her because, as you will see a little further on in this post, she's begun working on a new full fledged window. 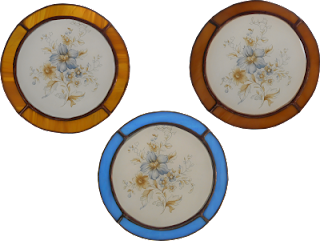 Melissa has set upon cutting glass for her Pietà Window.   Measuring only 10 inches high plus the border, this is not nearly as big as you might believe.  Mary's lips will be fused into position on a single piece of glass AFTER the surrounding pieces have been ground and tacked together.  We'll show you how that works out in the weeks to come.

Jeanne L is grinding away on her hummingbird Panel.   She's also making excellent progress so I doubt this will take her much more time at all. 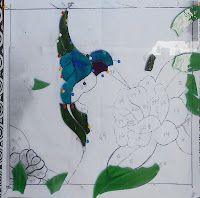 Jeannette was working as fast as she could on her Mardi Gras Mask Window this week.  She started with the mask itself and once that was tacked together she helped design the surrounding pieces to make it the required 30 inches wide.   To help fill the spaces at each side she's added diamonds in Mardi Gras colors.  In the end the Mardi Gras theme is perfectly represented here.

Terry  is working on these four Crystal Hanging Suncatchers which she's already begun foiling.   There are just eight more pieces to go and then Terry will begin assembling these.   You can see just on the pattern just where the standard crystal will hang go. Oh, and by the way, the red and the green ones are positioned properly while while the clear and amber ones are pictures upside down.

Another new reveal this week is Lara's Deer Window which has a very modern twist.   Lara always picks unique subjects and inevitably turns out beautiful, unique windows in doing so.   This will surely be no exception.  She's already cutting glass and it looks like a great start to me.

Jan may have had a pool of blood on her cutting paper but by the end of class she won out and finished cutting all of the background glass for her Jesse Tree Window.  She won't be in next week but she'll be ready to grind the week after that when she returns to this spectacular window. 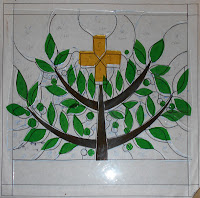 Jeanne M took her time and did a nice even job on foiling all of the pieces to her Geometric Design Window.   There was a lot of foiling to do here and after looking over her work I can say that Jeanne has already mastered that part of this art.  Next up she'll get a border on this window and then be ready to solder. 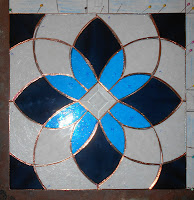 Carol almost managed to complete this beautiful sailboat suncatcher but she still needs to solder the second side.  Look at how perfectly round this is.  I'm loving it! 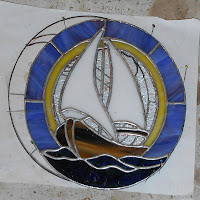 Mary hoped to cut her background from one piece of glass but the glass she liked the most had the grain running in the wrong direction to do that.  So Mary took out her pattern pieces and even though it was more difficult to cut them individually she still managed to get everything traced out, cut, and ground. That's a lot of work! 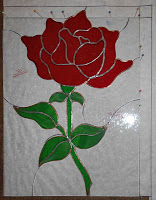 Jeff went back to his first panel this week and as you can see everything has been cut.  Since this will go into an opening and held into place with a moulding, Jeff won't be adding channel to the edges so that the thickness of the panel will stay thin.   This and it's companion piece are very close to being finished.

Kerry not only got his border cut and attached this week, he's already begun soldering his Cross Window!  He's taken very easily to the soldering process and even managed to complete the first side before class was over.  He'll hit the back side when he comes back in and almost surely finish this window altogether.

Mary Grace needs to get this Eagle and Flag finished in just 2 weeks and judging by the fact that it's all cut out and ground I'm thinking she'll make it-- especially if she brings this back in foiled and ready to be soldered.

Susan R has all of the glass cut for her 20's Lady and with the background firmly attached she moved along to tending to the border.   Each of the border pieces have been skimmed on the grinder, wrapped, and half of her border is now attached.  Look out because there is just a little bit of solder left to go and then this will be completed.

Shelley resumed work on her Dragonfly Window but she forgot to bring her background glass to class so she began grinding what she had already cut.  It's the slower way to get a window to fit together perfectly but at least she didn't waste a class.  And I have to say that this looks VERY good indeed! 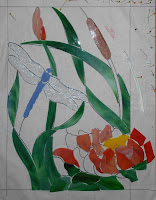 Tracey's Eagle and Flag Window is just waiting to get its final border attached and then Tracey will begin soldering it.  Pardon the pun but Tracey is flying through this project!   It's safe to say that she's only got a maximum of two more weeks to go on this before it's completed. 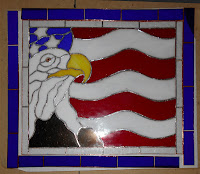 Next up we have Cindy's newest design.  It's  almost completely covered in pattern pieces but you'll certainly see this take shape in the weeks to come, thus unveiling the final design.

Becky S was busy filling in the flowers and leaves in the bottom portion of her Egret Scene this week and with almost all of this foiled it won't be log until Becky starts soldering.   This is really an exercise in precision but Becky is whipping those glass pieces into shape without even breaking a sweat.

Patrice now has the background tacked together and her borders attached to her Ragin' Cajuns Window!  Obviously she's going to be ready to begin soldering when she comes back in.  If you enlarge this and look VERY closely you can see the original font that Ragin' Cajuns was written in poking out from under the clearer sections of the glass.  Patrice didn't like the looks of those letters so she swapped them out for a more fancy font which really lends itself to this window. 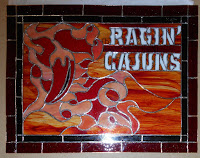 Speaking of fonts,  Linda L got the front of her Houston Astros Window all soldered so she  flipped it over to begin the second side (which is why the text is backwards).   I love how this is turning out and suspect that it will be finished shortly. 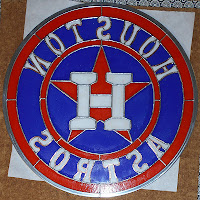 After completing her Butterfly Lawn Ornament, Martha resumed soldering her Pair of Cardinals Window.   With the front side completed and the back side very close to being finished I'm going to call it and say that this will be a featured finished window when we return. 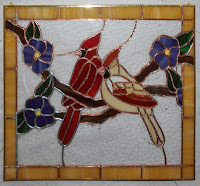 Brenda got her Salon Woman all tacked together and ready for solder this week.  Knowing Brenda I have a sneaking suspicion that this will walk in the door next week needing very little left to do to finish it off. 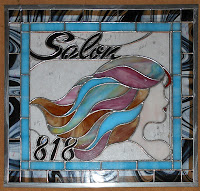 The work on Barbara's Santa Claus is moving ever higher and higher toward the top of her window, however this week we're bending the rules a bit by foiling what she's already got ground and fitted together.  We're doing this to stabilize things since we have a few pieces that need to be re cut (and to help make handing the face and beard easier). 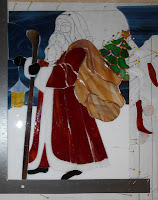 And lastly, with her Poppy Window completed Sheri has started working on her next window and it's a very Traditional design.  She's going to use the thinner accent pieces in her rendition of this window (which are highlighted blue in the pattern below).  Her pattern is cut out and her glass has mostly been picked out as well so she'll begin cutting glass when she comes back in.