Aspect ratios tend to throw our students off so I'm covering this to help explain how resizing a pattern works.   When selecting a pattern for a window you have to keep the proportions similar to that of the window you will be making it for.  If you have a window that's three times as tall as it is wide you should pick a pattern with a similar size and not one that is much wider than it is tall.   Let's use this circular pattern as an example. 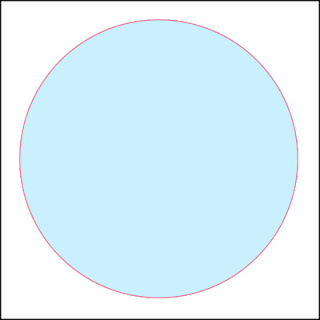 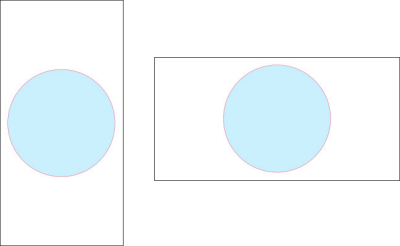 If you stretch the circle to fill these gaps then the picture loses its aspect ratio and the circle becomes an oval.   In a window made up of shapes this may not mean much but you certainly wouldn't want to change the aspect ratio on a pattern that has flowers or birds or people in it because they would look VERY unnatural. So when choosing a design for a window be sure to pick something that comes close to matching the shape of the window you are trying to fill.  Aspect ratios are VERY important as you can see below! 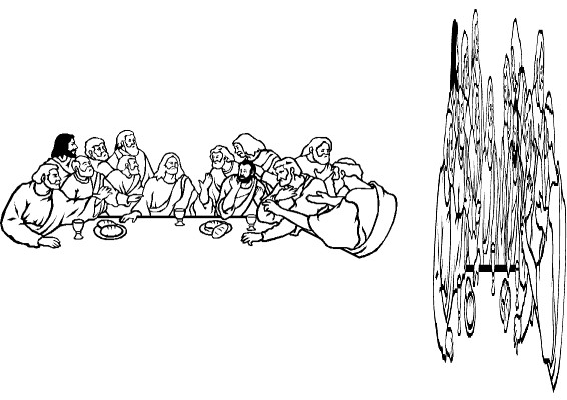 OK, with that out of the way let's start things off by looking at our finished projects this week.  Jeannette made short work of this Compass Rose Window, that's for sure.   Everything about it looks great and her work is top tier.   Me, I personally love the fact that she left this circular.  We've been seeing more and more round windows being made here in our classes and this one should surely inspire at least a few more. 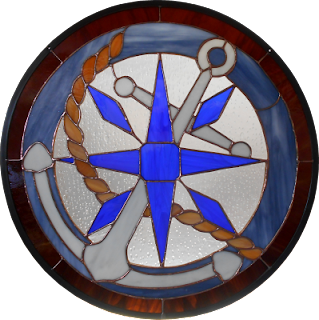 So then, let me tell you that Lara's Wedding Box turned out to be very beautiful indeed.   Everything fit together wonderfully and I felt the need to take a few extra shots of it so you can see how the top opens.  I have a sneaking suspicion that Lara will get invited to a lot of weddings once word gets out that she gives these as a wedding present! 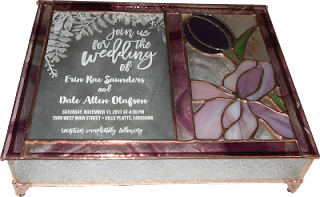 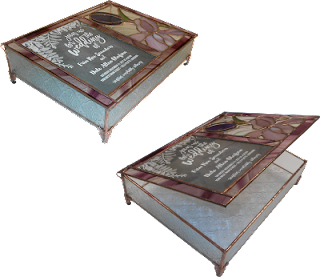 Betty finished her Fleur De Lis Window and hoped to start working on a repair but she had brought the wrong glass along with her.  :-(   Nonetheless, this window is the bee's knees.  There's just something about it's simplicity that I find very attractive. 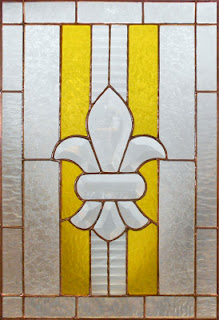 Angie had almost finished this Fleur De Lsi Window while she was at home during the week.  She wanted something quick and simple and apparently she's struck a chord with the other students because she had me scan the pattern so I could print it out for everyone in the class! 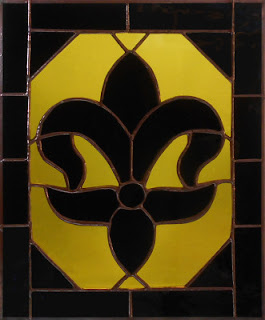 Susan D's Cactus Nightlight was finished before Susan started on her next project (which you'll see a little later) but I wasn't able to get a picture of it with a light behind it.  Why? Because the nightlight bulb burned out just as I was snapping the picture!  How's that for bad timing!  Nonetheless, the picture looks great even if it is only front lit. 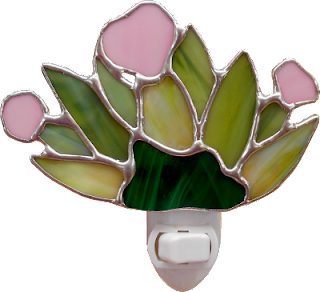 Our final completed window this week was done by Jeannette (yep, she has two finished projects in this post) and it's the first of many of these that we'll be seeing.   I love the way Jeannette made sure that the center of the rose/heart has a more orange color to it.  It's all been cut from the same glass but Jeannette is using the glasses natural highlights to make her window stand out in a crowd. 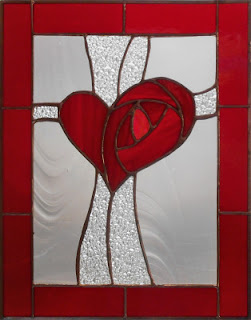 Susan D has started an Owl Suncatcher that everyone loves and wants to make until they see the number of pieces in it.   Susan, never one to back away from a challenge, is already at about the halfway mark.   This is a great project to make if you want to get rid of some scrap glass.  The best part about it is that when it's completed you'd never know that it's a scrap glass project.

Next up we have Roy who is making steady progress on his extreme multi-piece Cane Field Window.  When this is completed I think we'll all being softly saying, "Wow!" 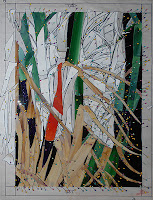 Rowena started this LSU Window while she was at home and now it only needs some solder on its back side to finish it off.   You just can't lose with an LSU window around here and that's all I'm going to say about that.

Jeanne M came in ready to start grinding all of the pieces to her Geometric Window and did she ever take to the grinder.   In just one class she got all of her pieces ground and ready to be wrapped! 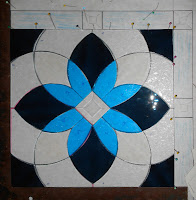 This angled view of Jan's Jesse Tree shows how much of the clear background glass she managed to cut out this week.   She's only got a handful of pieces left and then she'll be able to slide on over to the grinder to get this all fitted together. 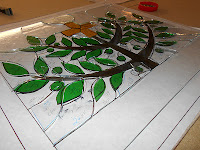 Terry came in with her Spiraling Flowers Panels all tacked together and ready for channel.  Once the channel was attached she finished soldering the back side of the bottom window and took both of the panels home to wash and color.  These won't be coming back into the shop since Terry is finishing them at home but I'm sure she'll be able to send me a picture of them once they are installed.

Kerry's Cross Window saw all of its pieces get foiled this week and that means that when Kerry returns he'll tack this together and then pick out some glass to border it all with.  I'm thinking that Kerry may very well begin soldering when we see him next.

Jeff's begun work on two cloud panels that will be mirror images of one another.   These will be more complex than the first panel that he has cut out but as he showed us in class this week, he's got this covered.

Linda F made a huge amount of progress on her Flower Basket Window as she cut out her background, attached it, cut a border and attached that as well. The channel has also been added to this complex and deceivingly small panel which leaves only the soldering left to go. 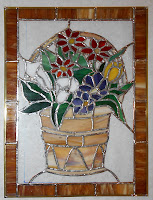 In just two weeks Tracey managed to cut out and then grind all of the pieces to her Eagle and American Flag Window.   Just look at how wonderfully it all fits together.   Tracey has taken this home with her where she hopes to get it wrapped during the week.  Who knows how far along she'll be on this when we next see it again. 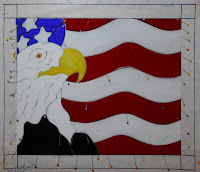 Linda L's Houston Astro's Window is an impressive piece of work.  Her circles are each perfect without any wavers and the text is equally as impressive.   We bent a zinc channel to fit this during class and it's 100% tacked together now.   This is very near completion. 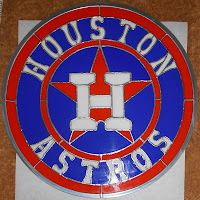 With everything ground and wrapped, Patrice is eager to get to the border of her Ragin' Cajuns Window.    I have no doubt at all that the border AND the channel will be attached on this when Patrice returns to class next week.  Get that soldering iron ready!

MiMi's Industrial Fleur De Lis has its channel attached.  That means that all the glass has been cut, ground, wrapped and tacked together.   Not only that, the front side of this has been soldered in its entirety along with most of the back side!  She's very close to finishing it and when it's hanging up I know that it will be the talk of the town. 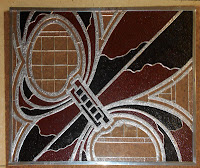 Sheri's Poppy Window only needs some solder on its back side and then this will be out the door for the last time.   She did a beautiful job soldering each of those glass globs into place all on her own and her soldering is spot on.  Look to see this completed real soon now. 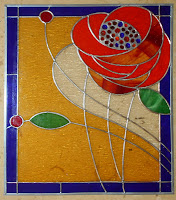 Martha's Cardinal's may be in Limbo, but her Butterfly Lawn Ornament is just about ready to fly.  She's got this ground and fitting together wonderfully  which means that the next step is for it to be copper foiled. 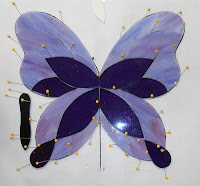 Here's yet another project that needs no more cutting.   Brenda's Salon Window just needs two coats of solder and some channel and then she'll be moving along to something new.  The end, as they say, is near! 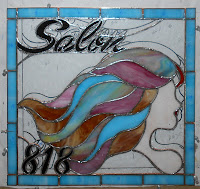 Barbara's Santa Claus is about 2/3rds of the way ground now.  She's a little concerned about how much snow there is in this window so if she still has enough night sky glass left she'll be replacing two pieces of white glass which will lover the snow level considerably. 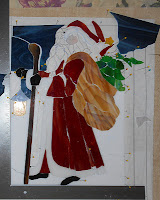 Cindy's been busy assembling six more Flower Suncatchers.   The problem with these are that Cindy needs to draw up new patterns for each suncatcher since they aren't all the same size.  I think this is the last of them though so Cindy is more than likely relieved that all she needs to do now is solder them.

Lastly, Melissa's next window is in the works and it's one of my favorite subjects.   Based on Michelangel's La Pieta, Melissa is focusing mainly on the face of Mary due to the aspect ration restrictions of the subject matter.  There's a lot of background work in this piece but when it's done it will indeed be a work of art. 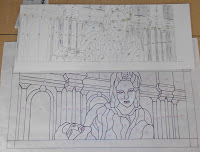 That's it this week, take care everyone!