Let's get right into things here since I'm late once again!

Sheri's Traditional Window got a slight update when she added a beveled inner border which led to an end result that is breath taking!  I have to say that I really love how she handled those two borders because by using only clear glass she allowed the focus to fall solely on those magnificent bright colors in the center of her piece. 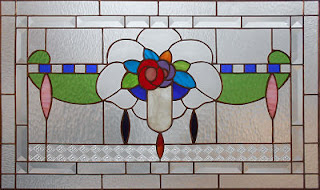 Next we take a look at two Peacocks that were each completed by different students this week.   This is Betty's rendition of the standard peacock that I've made time and time again.  She used multiple colors in and throughout the birds feathers and then added a wide inner border of bevels, followed by a  final border of the same glass that she used for the peacock's body.   Stunning! 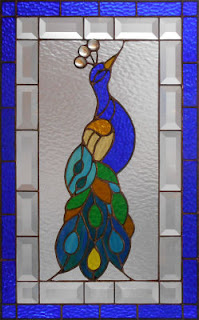 Our second Peacock was made by Martha and she took the same pattern but ran in a different direction with it.   She kept a blue and green color scheme throughout the window, trimmed it with a thin inner border of bevels, and then used the same blue/green glass that she used in the wing for her final border.   There's no right or wrong here, only what Martha and Betty liked best! 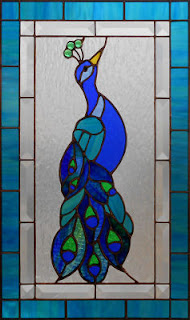 Linda L completed her American Flag inspired Mickey Mouse Lawn Ornament and it's ready to be staked in her yard!   I don't think you'll find another one of these any time soon unless Linda makes it for you! 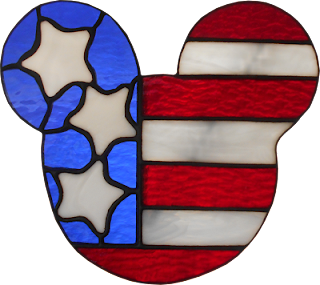 Barbara H put the finishing touches on her Santa Claus Window this week, and when I say finishing touches I mean the eyes!   Now that Santa can see and has been cleaned up he's ready for hanging in just 9 more months (Christmas is getting here quicker than ever).  Slow and steady wins the race because this Santa looks GREAT! 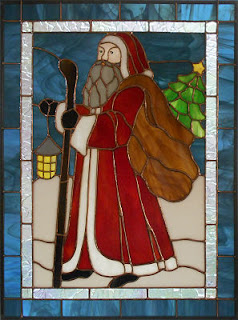 Next up we have another Butterfly which can only mean one thing-- we have another new student!  Annette is actually the mother of Shawn, who started last week, but unlike Shawn, Annette has done some stained glass work before.  Her cutting was spot on the line and her Butterfly came out wonderfully so I can't wait to see what she does with us in the weeks to come. 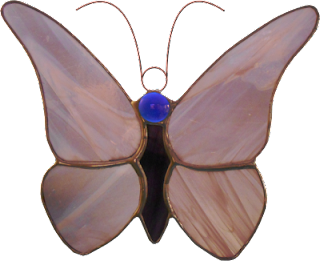 Speaking of Shawn, let's see what she's up to this week.   As you can see she's picked a flowery window design that she's filling with nice bright colors to make this really cheery looking.  With this being her first real window I have to say that she's doing great already!   I think we got all those doubts about her abilities out of the way when she saw her butterfly get completed last week.

Now here's a blast from the past, Tasha is back in action and cutting glass as though she never took a few months off.   She started making the Buxom Women with Wine Window and with just three hours into this project she's already got the women taking shape.   I guess stained glass is just like riding a bike-- once you've done it you never forget how it's done.

Mary is also moving along at an astounding rate on her Cross Window.   Here it is already cut out just two weeks after Mary started it!  She made excellent use of the pistol grip cutter which helped make all of those radiating lines perfectly straight.  She's already moved along to the grinder and even has numerous pieces of this ground. 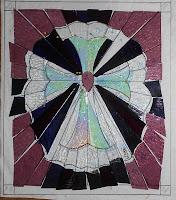 After wrapping up the washing and coloring of her Traditional Window, Sheri moved along to a pattern that's an old friend of hers-- the Circular Butterfly.   I believe she said that was going to be making three of these and as you can see she already has the first butterfly cut out already.  Experience certainly pays off. 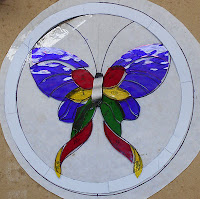 Linda L is working on a set of three Baby Girl Suncatchers and they're all cut out and ready to be ground.  In fact, she's got one bonnet already ground so I think we'll see these done VERY quickly.

Betty finished all of the cutting on her two Easter Bonnet Windows and then got them tacked together and borderized to boot!  She'll most likely be soldering these at home, but if not then we know what she'll be doing when she comes back into the shop next week.  Much like the Peacocks earlier on in this post, this is another example of how a color scheme can completely change a window. 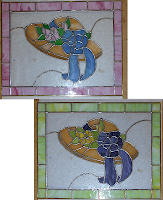 Susan R surely made the most of her class this week as she got her Owl all wrapped and a Shamrock Window all cut out and ground as well!  Your guess is as good as mine as to which of these will be finished first because they are both so close to completion already. 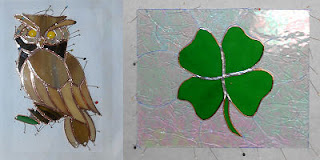 With two birds done and just one more to go I have to say that Cindy is a glutton for punishment.  Look at all of those tiny pieces that she's been cutting and wrapping!  Once that last bird is tacked together the rest of this is going to be a piece of cake.  And I've officially named this window the Faux Mosaic Bird Window.

Jeannette's Easter window is all cut out and she's made a HUGE change in it since last week.   When she had left us she had traced out all of the pieces for her sky onto a light blue and white glass.   She took the glass along home with her to cut out during the week but when she put them into place she didn't like the blue at all and then re-cut all of the sky/background using the clear glue chip glass you see below.  That's a huge undertaking but she'll be far happier changing it than she would be trying to convince herself that she liked it done in blue glass (which she didn't).

Meanwhile Rowena was busy working on a Cross/Heart/Rose Panel and it looks like she's got this well under way.   To be honest I never really made it over to her work spot during classes and I'm assuming that this window was what she was working on.  Sometimes it gets hectic in our classes and I lose track of things.  This is one of those times!! 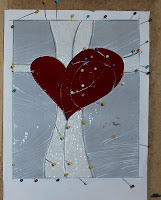 Jeanne M's Virgin Mary Window is taking shape now from the upper right on downward.  She's mastering the art of using the next adjoining piece to make the previous piece fit and I think she's got it now.   Grinding this way allows you to get a perfect fit with each trip to the grinder.  I highly recommend it but you can't do that if you grind as you cut (which is a bad habit to get into).

Next we have another Mary to look at, but this one is patterned from Michelangelo's La Pieta.   What Melissa doesn't know yet is that the third time was indeed the charm because Russ fired new lips on a third piece of glass and we both like the way they came out of the kiln.  I still haven't see the glass in its proper position in the window because I'm waiting for Melissa to see it first.

Becky B's Magnolia Window is everything she was looking for, it just took a little time to get there.  With all of her glass now cut Becky is ready to begin grinding her background glass and then add a double border to finish it off.  She's a woman with a mission. 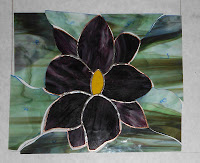 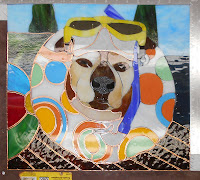 Patrice got this Texas NFL Logo Window all cut out and tacked together (save for the border) while she was at home last week.   When she came into class she designed the fancy border, got it all cut out and then took it home to solder together.  This is the second one of these she's done and this one almost literally flew together for her! 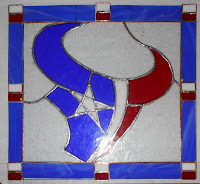 Then we have Carol who worked on two more Butterfly Lawn Ornaments and they are nearly complete.   All she needs to do is tack them together at an angle (for the 3D effect), add a body, antennas, and a stake, and then these will be ready to decorate a yard!

With all of her background glass cut out Mary Grace has move along to the grinding process of her stained glass Flowing Flowers Window.   Her cutting is better than it's ever been and that means that her grinding should go a lot easier for her.

This week Kerry got to see the glass ring saw in action as we cut out the rectangular section near the bottom of the Ukulele for the bridge.   He also cut out the frets along the neck of the instrument and when he returns he'll work on his border(s). 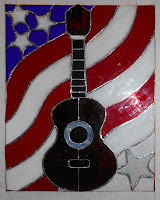 Martha is making a Magnolia Window of her own and as you might be able to see from the picture, it's already fitting together nicely.  She's made short work of this project and I'm thinking that Crosses will be next in her immediate future.

Tragedy struck Becky S during the week as her soldering iron stopped working just as she was planning to finish off the second side of this window!   She got a new iron as soon as she came into class and got a good two thirds of the back side soldered as well.  I think we can plan on seeing this completed upon her return because even if it isn't all soldered she'll still be able to get this done before the night is over with.

Roxane is back to work on her Penguin Window and it's shape is really taking form now.  She's taken this home with her where she hopes to get even more work done on it for next week. 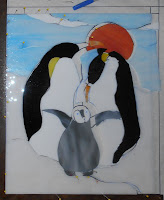 With just one piece of green glass to replace, Shelley's Dragonfly and Water Lily Window is as close to being completed as can possibly be.   We'll be featuring this window when we return, and you can bank on that! 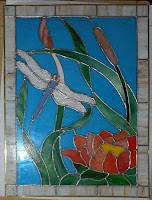 Lara's Contemporary Deer Window is all soldered and ready to be colored.   We've replaced the broken piece and no one would ever suspect that we replaced anything (unless they read this blog!)  This is another window that will surely be completed in our next post. 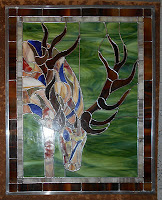 Lastly, Jeff ran out the door before I was able to snap any pictures, but he's making great progress on his series of panels.  I promise to get a picture when we return next week.  Until then, may all your score lines break perfectly!