Say Hello To My Little Friend

Everyone always asks how I get my patina to look so good and all I can say is that I make sure to take my time cleaning my window using just water (which means NO soap!)  I also take my time applying the patina using a piece of felt that is completely soaked with patina.   Keep going over the sections of the window that you've already colored never allowing the patina to dry using only a light pressure on the felt you are applying the chemical with.  When it's been colored, front and back, wash it immediately using just water on a sponge with light but firm pressure.  Go over the window again and again and again using only water and when you dry it add some wax using the very lightest of pressure on the rag that you've applied the wax to.  Never put wax directly on your window!

If you are coloring you window black allow the patina to sit on your window for up to 45 minutes after the window has been completely colored (front and back).   Wash the window WITH SOAP to remove the black patina and then wax it well using the same light pressure that you would use when coloring it copper.

The key to an even coat of patina is to avoid using soap and to start the patina process with an EXTREMELY clean window.  It took me over a half hour to wash and patina the window that I made later on in this post.

So with that out of the way let's look at Angie's Marlin Window  which turned out to be one of my favorite windows by her.   Everything from the color choice right down to her soldering was nothing short of beautiful on this piece.   Angie has truly come into her own  now since she did the majority of the work on this while she was at home. 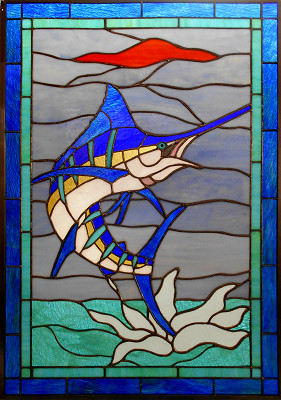 Tracey finished another Cross Suncatcher (and it isn't actually 3D, it's perfectly flat) and a Mardi Gras Fleur De Lis.   I can't believe how popular these are but when our students knock them out this quickly and have them look this good, well, I guess it's no wonder! 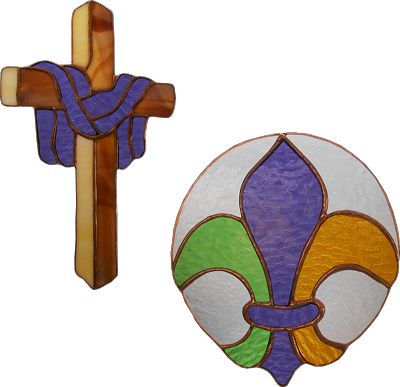 And this Fleur De Lis was made by Carol.  This one was made about half of the size of all the others you've been and will be seeing.   I guess we can call this the Mini De Lis!

We have a new student join us this week so that means that it's Butterfly time!  Shaun Picked all reds for her first piece of stained glass with us and now that this has been completed she's about to move onto a full fledged widow.  I know what it will be but if you want to know you'll have to come back again next week when we show you what she'll begin working on. 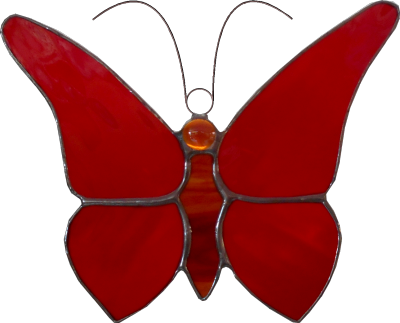 Our final finished window (and the one that took over a half an hour to patina) was made by me because we have a show coming up that we actually have no new windows for.   This is an easy design that can be knocked out quickly and that's why you're seeing here.  Cut, ground, wrapped and tacked in just one day and then soldered and colored within 2 hours the next day, you know this is nice and easy.   What I love most about this window is the wrinkles in the amber glass.   I love the un-eveness of the glass because it contrasts so well against the perfect straight cuts. 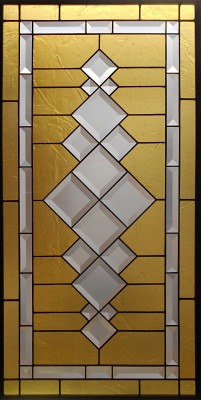 Now I have to say that this next window is looking better than I ever imagined.   Jeannette wanted a pattern for an Easter Window featuring a Sross, a Lily, a Rabbit and some eggs so I threw them all together and then radiated lines from the sun to make most of the cuts possible.   Now that she's got everything but the sky cut out I have to say that I'm loving this Easter Window and that her work on it is flawless!

Man oh man, Susan D is flying through this St Patrick's Day Leprechaun!   It's all fitted together already and almost ready to be wrapped since he only needs a pair of shoes to finish him off.  All those small pieces flew by with the greatest of ease for Susan.

Mary really took to the Pistol Grip cutter which means that this beautiful Cross Window, with only one night of work on it, is almost completely cut already.   And her lines are as straight as can be!    There is no doubt in my mind at all that she'll begin grinding this upon her return. 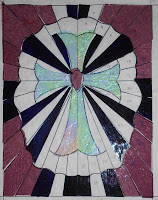 Jeanne M's Virgin Mary Window is all cut out and she's moved on over to the grinder where she's about to knock these pieces into shape!   You can already see just how nicely this is going to look even before it's been ground.  The more I look at this the more I think I have to convince her to use a double border on it.   It would just set it off beautifully.

Martha began a Magnolia Window at home and when she brought it into class all she needed to do was cut out a background for it.  I know that you can't see it in the picture below but her (clear) background has indeed been cut and she's ready to start grinding.   Before she got involved with that she began soldering her OTHER window and we'll see what that is a little further down in this post. 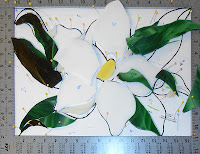 Susan R came in and settled down to cut some glass.   About an hour and a half later she had this entire Owl cut out and ready to be ground!   Then she started grinding it and before she left class she had all but three pieces ground and ready for foil!  That what I call quick and efficient work!

MiMi's Dog in a Life Preserver tribute window is all ground and just awaiting foil now.   When it comes to cutting glass the positioning of the pattern pieces is so much more important that most people realize.    It's not just the grain of the glass that you want to pay attention to-- it's the coloration in the glass as well.   Look at the tan glass that MiMi cut for  Oakley's face.   Notice how it naturally runs from light to dark and note how wonderfully positioned these variances are.   That's what I call attention to detail-- it just looks so darned natural! 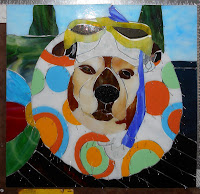 Lara's Deer Window has its front side soldered and it's just about ready to be flipped.  However, we had a slight break and we've decided to try to patch only part of the broken piece rather than the entire (large) piece.  The curve fits into the design seamlessly and we WERE able to break it out without any problem.   Lara will be soldering on the back side of this almost as soon as she comes in again next week. 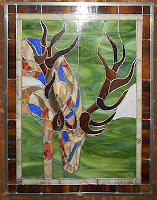 Jeanne L's Humming Bird and Flowers Window is very close to being completed also.   She wants to go with a double border on this but she's only sure of one color at this point in time.   She has a piece of glass at home that she thinks will fit perfectly with her second choice so she's going to bring that in next week when the double border for this will surely be cut and attached. 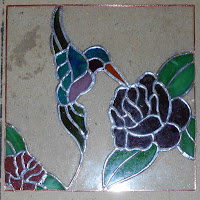 Kerry's Ukulele Window got its last pieces ground and Kerry is now working on wrapping those pieces.   It was a VERY busy week so we didn't get to use the glass ring saw on this but there's no doubt that we'll get to show everyone how that works when Kerry comes back in. 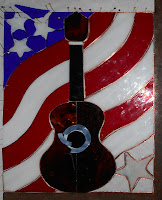 Jan finished all of the grinding on her Jessie Tree Window and took it home with her where she hopes to get some foiling done on it.   It's official-- this hard part of this window is well behind her now and she made excellent time doing that hard work.  The rest, I predict, will go easily for her. 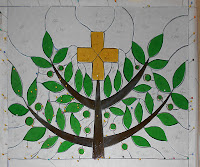 After finishing her Mini De Lis Carol began cutting out a new Butterfly Lawn Ornament and, as you can see, she finished all of the cutting.  She creates these Butterflies very easily now that she has a few of them under her belt. 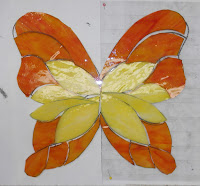 Linda L's American Flag Mickey Mouse is another project that's about to be finished.   She completed the grinding and the wrapping and now has everything tacked together.   That means that this will surely be a completed project when she return to class next week and solders it. 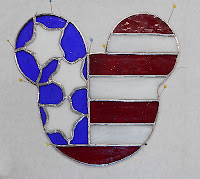 Remember when I said that Martha was working on two different projects?  Well this is her second one, the Peacock.   With the final border attached and the front of it completely soldered I think that we'll be seeing this for the last time next week when she finishes the soldering on the second side.

Sheri got both of her borders attached this week and she's very close to finishing this traditional styled window!    Based on a picture that she found on the internet, she's changed the overall feel of the design by adding two borders (one of them being made of bevels).   By steering clear of color in her borders the focus remain front and center.

With the front of her Heron Window all soldered and the final border attached Becky S is ready to flip this window and start soldering the back side.   This window may very well be done before you know it because Becky is one of the best solderers that I know!

Now that a good deal of the background to Melissa's Pieta Window is cut out you can really see what this is all about.   She had hoped to cut more glass this week but accidentally left her glass in her other vehicle!  These things happen but they never slow us down because there's plenty more that can be done even when you don't have glass with you.

With just one missing piece left to cut, Shelly is about to begin soldering her Dragonfly and Water Lily window.   Her border is perfect featuring plenty of colors without distracting the viewer's eye from the subject of the window. 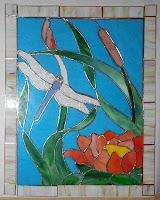 Finally, with everything soldered and only a quick once over to go, Barbara's Santa Claus Window is just about ready to be hung.  Look to see this completed upon our return in just seven days! 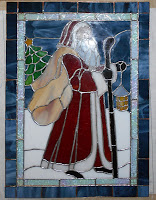 So there you have it, everything that was fit to print this week at Bayou Salé GlassWorks.