A Pain In The Butt-erfly

I just can't seem to get caught up here.   I'm still one week behind so let's just jump right on into things.

Angie completed her LSU Tiger Eyes Window and she's brought this pattern back to life as two other students mentioned that they'd like to make it as well.   I guess you can say that Angie's window is inspirational as well as supportive! 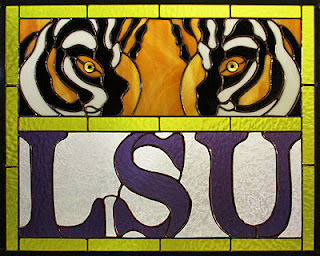 Melissa's Heron Window is lovely indeed as she spared no expense when it came down to detail and exactness.  There's not a line out of place nor a feather out of alignment in this stunning window. 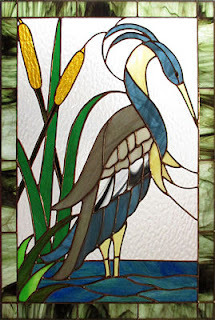 Mary Grace wrapped up the work on her colorful Flowing Flowers Window and she's already moved along to a new project.  What I like most is that Mary Grace keeps examining her work to see what she can improve on in her next project.   That's a big part of the learning process and she's doing better than ever because of this. 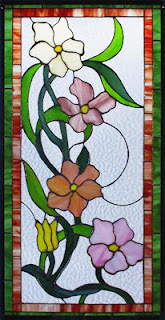 Rowena's Flowing Pattern is a free form design at its very finest.   Using a mostly soft color scheme with some saturated green accents, this is a window that puts you into a Zen like state of mind and being! 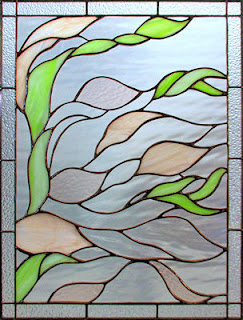 Tracey put the finishing touches on her latest Cardinal Window and the end result is perfection.   A lot of people saw this during the past week since it was hanging up rather than hiding under the table and what I heard most was, "I never would have thought to border it in the same pink that was used in the flowers but it REALLY works!"   And indeed it does. 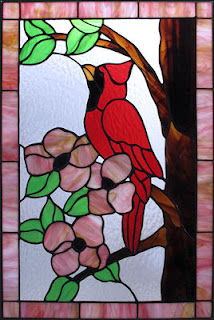 Shawn's Stylized Fleur De Lis Window went home with her once she was able to color the lead copper and since this post is a week behind I can tell you that it was already been installed and that it works wonderfully in the spot it was designed for.  This pattern utilizes a three colored Fleur De Lis and the beauty of it is that you can arrange those three colors in many different ways.  That means that this pattern has a different look whenever we see it! 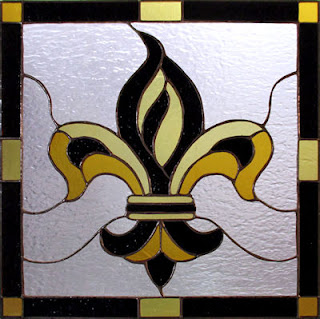 Using a lot of scrap glass, Linda L was able to complete this large Owl Lawn Ornament without having to acquire much new glass at all.   This is about twice the size that it's normally made and that meant that we couldn't simply mount it on a piece of zinc channel the way we normally do since it would bend due to the added weight.   Linda brought in a piece of copper pipe which was more than up to the task and which soldered easily to the back side of the owl. 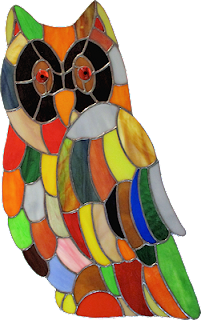 This is Betty's latest Sunflower Panel that she just finished and she has a second one that's not far behind! 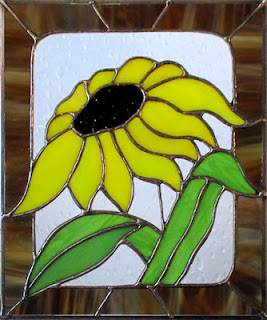 Then there's Mary who completed her blue Butterfly Lawn Ornament which means that it's ready to be staked into her yard!  She did a great job on this and, like Betty, Mary has another on the way! 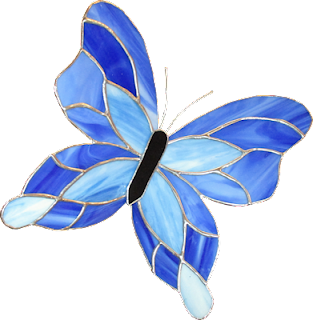 Lawn Ornaments are back in fashion as Carol's 3D Bee Lawn Ornament is ready to be put into her yard as well. 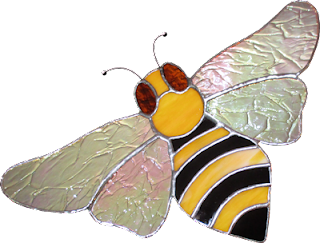 Annette's Fido The Poodle Window is shaping up to be a stunning design.  Inspired by a poodle with a heavy nod to the psychedelic 70's, this is one window that refuses to be ignored! Woof! 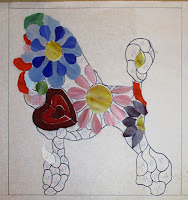 In our last post I said that we'd be able to see Susan D's Boat Panel better with its next appearance since all she had cut out was the white and the clear glass.   This week she's got it all cut out and you can clearly make out the design now.   She's even begun grinding it already! 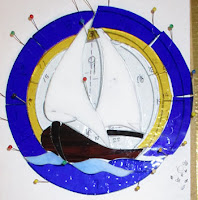 Barbara H has all of the petals, leaves, and branches for her Wisteria Window cut out and she's already begun grinding them.   She's working from the bottom up and you can see that she's got the bottom blossom almost completely whipped into shape.

Angie not only completed her Tiger Eyes LSU Window, but she also made major headway on her pair of Toucans.   These have been cut, ground, and almost completely wrapped already!  That's fast work for sure.

Next we take a look at the redesigned version of Susan R's Swan Panel.   As printed, the pieces were far too small to work with unless Susan wanted to use 5/32" foil to wrap her pieces.  I discovered that the pattern she used was supposed to be enlarged when printed so when she came in we just grouped feathers together to make it 'make-able' in its current size. 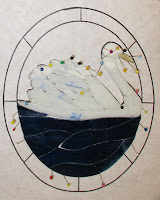 Belinda came in with all of the glass for her Humming Bird and Morning Glories Window cut out!  She's begun busy grinding and things are really shaping up as her pieces fit together.  This is going to be a nice bright window. 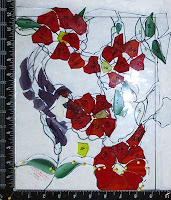 Mary Grace started an Air Force Window last week and in this post we see that she's got the logo all cut out and ground.   She's only one piece away from having it all foiled which means that she'll be cutting background when she comes back in. 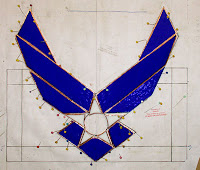 Cindy's Mermaid Window has been ground and the 3D shells that she stumbled upon in her garage have come together to form the Mermaids top.   Cindy has already picked out her border glass and it's going to make one exquisite window! 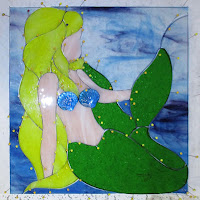 Lara now has all of the background glass for her Peacock Window cut ground and tacked into place!   That just leaves her borders to go and the small circular sections in the two opposing corners.  She's certainly on the home stretch now.

Jeanne has begun the soldering process on her Circular Rose Window and it's looking like this will surely turn heads.  Everyone who sees this is surprised at just how well the muted colors work in this design but sometimes less is more and that's certainly the case with this window. 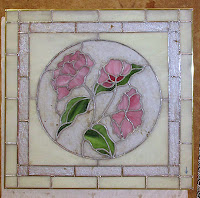 There are just 4 lines left to solder before Jeannette can add some hooks to this and then wash and color it.   That means that this will be a completed Dive Shark Window when you read our next post. 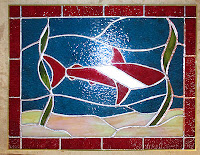 Martha is back to work on  her four Cross Windows as she got all of the borders cut ground and wrapped.   It won't be long now before we see these completed and Martha gets started working on something new. 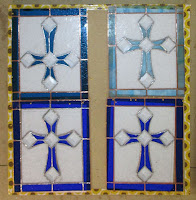 With one Sunflower under her belt (which we saw at the top of this post) Betty is wrapping the second in this pair of Panels.   Once this is tacked together she'll cut her border pieces and finish it all off. 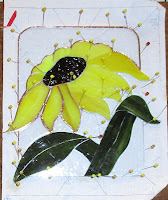 Meanwhile, Linda F is making two Sunflowers of her own but both are in a single window.   With everything now ground and fitting together nicely, Linda is ready to begin foiling her pieces.

And that's it for this post.   Now I'm off to edit pictures for what happened in class last week.