You ARE the Dolly!

When cutting crucial pieces where alignment is of the utmost importance, it's always best to grind your pieces first and then finish cutting the sections that need to  line up.   Eyes are a great example of this technique.  In the picture below the red dot represents where the eye should reside for the hummingbird. 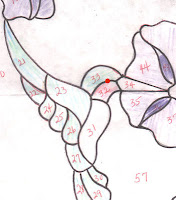 Since a split lies across two pieces of glass it's best to forget the eye and just grind it as if the eye doesn't exist (for now).  The pieces should be ground together as the pattern below shows.  Once everything fits you can use the small 1/8th inch grinding wheel to grind half of a circle on one of  the pieces and then after repositioning it you just mark where the second half circle should go and then grind it.   This ensures that everything will come together perfectly. 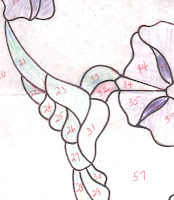 If you were to grind the half circles before the rest of the pieces fit together you would most likely end up with an eye that doesn't line up, very much like in the picture below. 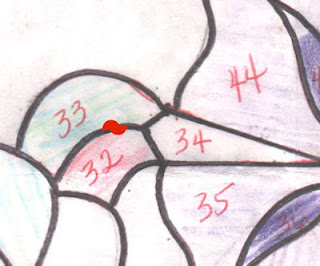 Belinda finished her Horse and Flag Window and her work on it is wonderful.  She challenged herself with this design from start to finish and the end result shows that she's not one to back away from a challenge.  There are sections that she's not completely thrilled with but that's how it is whenever you make a window-- there's always something that only you will ever see that you wish you could change.  And that's true of ALL of the windows we make! 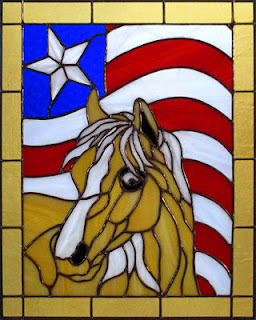 Betty's  Iris and Lily Window was a pattern that I was completely neutral about but after seeing it completed I have to say that I absolutely love it.  If that isn't a glowing review for someone's work then I don't know what is!  I love her colors, and her craftsmanship just highlights the piece. 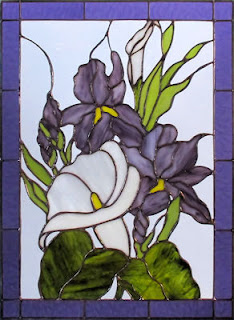 Susan D's Tribute Window is officially finished and her work on this is flawless.   Add to that the fact that Susan drew up her own pattern from a photograph and you can understand why this is such an impressive accomplishment for her.    This gets a thumbs up indeed! 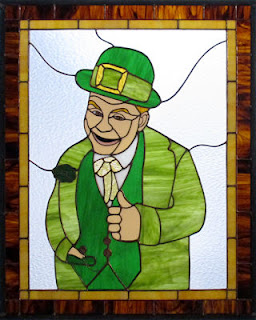 Linda F completed  her Cactus Suncatcher and it's as cute as can be.   Sometimes size plays a factor in how a project looks and the smaller you go the better things tend to work out.   However, it works the other way in the opposite direction because you can only enlarge something so much before it takes on an odd appearance. 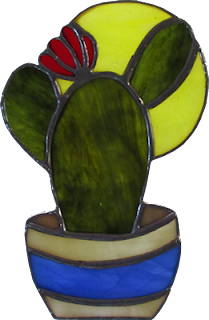 Martha came  in and touched up the soldering on her large Tulip Hanging Piece.  This could easily have been  window but there would be so many lead lines running up to the top edge that it's been left open to avoid all those unsightly lines.  Presentation is a major part of the stained glass process. 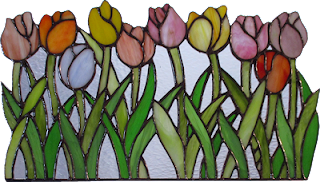 Cindy's latest Birds on a Wire hanging is, as always, colorful and exciting.  She can really fly through the creation process of this project and even all of those tiny round eyes don't scare Cindy anymore!

Jeannette began this Shark Scuba Dive Flag Window by cutting it out at home and then she brought it into class to see how much she could grind.   By the end of the class she had it all fitting together perfectly.   Placing the shark logo underwater gives us the best of both worlds by representing a shark in the wild while also signifying the flag emblem. 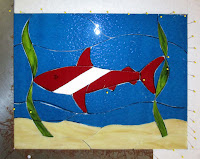 Betty also got the center portion of her sunflower panel ground so it won't be long before we see this hanging up.  All she needs to do is cut the border (which can't be done on a strip cutter because the corners are curved) and then solder it.  The end is near! 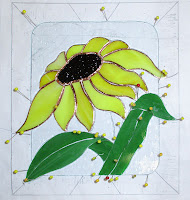 And then we have Linda F who is working on a Double Sunflower Window that runs horizontally.  Although we've seen this pattern made in the past it's not nearly as popular as the vertical version.   Looking at this I can't understand why that's the case because this looks great!

Susan R has begun work on a very intense Swan Pattern.  This is only 7 inches wide and that means that some of those Swan feathers will only be about an eighth of an inch wide!  With the water having been all cut out the fun is about to begin! 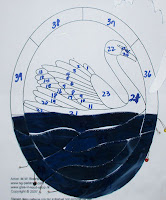 This delicate Rose Window has always been a favorite of mine and Jeanne L's rendition of it doesn't do anything to change my mind about it at all.   With just one one border left to grind and tack into place Jeanne will be soldering this before you know it. 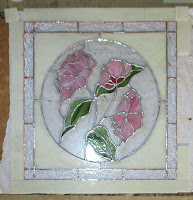 Patrice has upped the ante on her rendition of the Umbrella Lady Window by adding trim to the dress.  You would think that a change that small wouldn't make much of a difference but after seeing this I have to say that I wouldn't make this pattern any other way.  I love when a student takes something, runs with it,  and makes it better that it was!

Lara got the head and body of her large Peacock Window all assembled as well as the two flowers and branches!  That means that she's ready to begin cutting out her background glass which, with a little luck, will be accomplished when she returns next week. 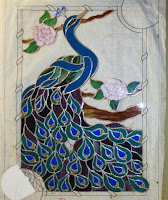 Linda L is ready to start soldering her large Owl Lawn Ornament now that she got it all wrapped while in class this week.   There was a slight accident with one of the pieces surrounding the owl's right eye (that *I* broke, not Linda) but that's and easy fix that won't stop this project from being completed upon her return..

Rowena has her Flowing Window all tacked together now and even has the front side completely soldered.   She was looking for a pattern that suited someone's personality and friends that have see this have already told her that she hit the nail on the head with this piece.  There's something very peaceful about it that just makes you feel relaxed.... 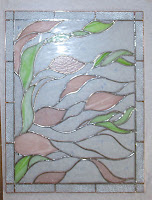 With the front side of her Heron Window all soldered, the only thing that Melissa has to do is add some brass channel around the edges of this window and then solder the back side (although not necessarily in that order). I have a sneaking suspicion that we will see this with light behind it in our next post!

Tasha's Poppy Window is a project that was SO very close to being completed.   Another 45 minutes would have finished this off because the only thing left to do was to color the lead.  Tasha wants the lead to contrast against the white so she's going to use black patina which takes about 45 minutes to set.  That means that she'll color this when she comes back in and then start working on soldering her Umbrella lady.

Mary Grace started this U.S. Air Force Logo Window and already has the logo all cut out.   This is a window that we will make by tacking together the logo and then cut out the background.   It's rare to make a window this way but if  the subject matter is essentially a suncatcher (like this is) then it's best to work this way. 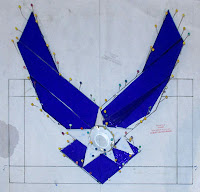 Angie's  LSU and Tiger Eye Window all came together this week as the bottom and top sections were joined with a common border surrounding them.   Angie got the front side soldered while in class and only has the back side left to go now. 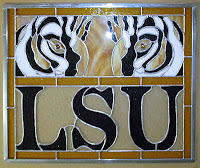 Mary Grace also finished soldering her Flower Window but had no time to wash it and color it so she's leaving that part for next week.   Look to see this completed and lit up when we return.

Here's yet another window that only needs to be be washed and patinaed before it can go home for the last time.  Tracey (like Tasha) will be using black patina on this which means that she'll need to let it sit for 45 minutes.   When there's only 2 minutes left in class it's not a good time to start that process.  For all intents and purposes I'm calling this a finished project.  Let's hope that Tracey isn't a grinch about the whole thing!   (I only say that because her next window will be The Grinch Who Stole Christmas!) 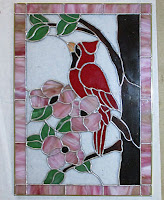 Susan D began cutting glass on this 8 inch circular Boat Suncatcher.  There are a lot of pieces in this small project but the end result is always beautiful.  As you can't see, Susan has her white sails and the clear background glass cut out already.  Next week she'll apply some colors and then things will be more visible. 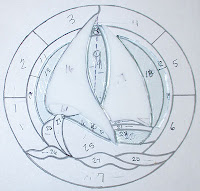 Carol came in and started a Bumble Bee Lawn Ornament and as you can see she's ready to start wrapping her pieces already since she has them all cut AND ground!

Mary said that it was time to take a bit of a break and do something quick and easy.  This decision led her to making her first Butterfly Lawn Ornament which she now has all cut out and ground.    If this is wrapped when she comes back in she'll easily be able to finish upon her return to class. 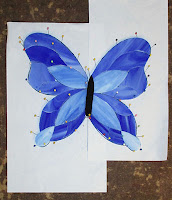 Barbara H is starting a Wisteria Window and although the actual pattern is almost 6 foot tall Barbara will be cutting it down substantially.  Hers will be about 2 foot tall and simply stop at the bottom of the second cluster of flowers as shown in the picture below.  Will that make it any less beautiful?  No, not at all!

So there you have it, another week of classes under our belt!