The Circle Of Life

All of our students knew her and it is with great sadness and regret that I have to say that Miss Ethel (Effels) passed away on Christmas Day.  December was a hard month for her but on the 24th the sun was shining and Ethel was bathing in those warm sun beams as she watched us work on the new Kiln Building.  All the while we worked she was as affectionate as a young kitten.  At one point we said that she might be coming around again as we picked her up and and petted her throughout the day.   She even got a good brushing in (which she loved). All in all it was a perfect day for her and I have no regrets about how we spent that last day with her.  She will be missed. 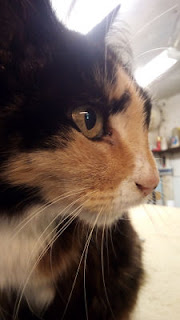 Annette got her Happy Grinch finished just in time for the Holidays!  With his heart three sizes bigger than the last Grinch we saw, this one's literally bursting out of his stained glass borders.  Annette is flying through projects already and she'll be starting on a Dog Window soon.  Just wait until you see that one! 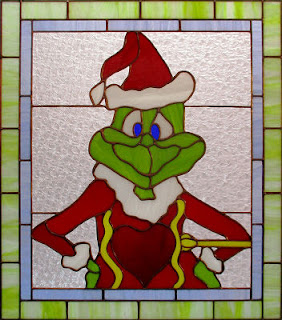 MiMi's Cotton Boll is officially complete and MiMi now knows how to make rounded corners the smart way (by NOT using a paper pattern).  Her use of amber glass for the border is a perfect choice since it matches a small amount of amber found within the actual subject matter.   That's always a safe way to choose a color for your border. 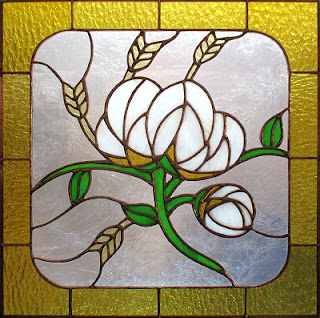 Carol was fretting about making these two Crosses as an order and right up until she handed them over she was worried that disappointment would follow.  But she was wrong!  Instead everyone was absolutely thrilled with her work (as we ALL predicted).   I mean look at these windows-- they are flawless. And now another student wants to make one.  That's what I call inspirational! 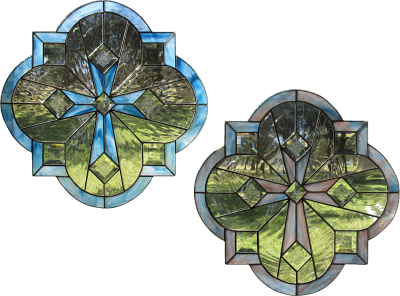 Jeanne M's Cardinal Suncatcher has turned many heads in class and now there are plenty of copies of this pattern floating around throughout our different classes so we may be seeing a few more of these.  I have to say that this is a wonderful design but it's the wire work that brings it all together both literally AND figuratively!  Jeanne has done a great job here. 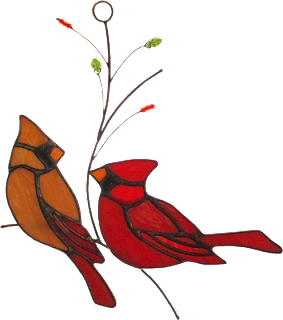 Kerry's Pelican is ready to find a home in a window and it also turned out great.  I especially liked the fact that he wasn't afraid to use something other than blue for the sky because it's artistic decisions like these that can turn an ordinary design into a spectacular one.  And kudos to Kerry on his soldering abilities.   He really upped his game with this window. 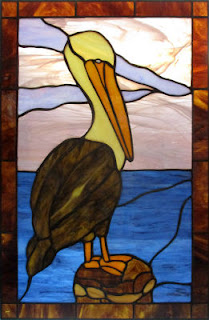 Look at the beautiful lines in Linda F's LSU Window.   You couldn't ask for straighter lines and that's just ONE of the reasons that this window looks fantastic.  The other reason is because she used a purple glass that is different from the background for both the Fleur De Lis and for the Tiger stripes.   Had she used the same purple as her background the tiger stripes and the Fleur De Lis would have blended into the background and lost much of their definition.  However, what she's accomplished below is perfection. 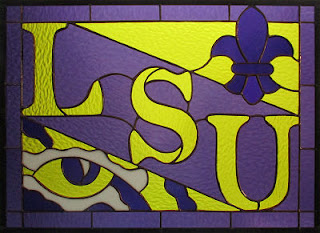 Betty made her own Football themed window this week and hopefully the Saints fan that gets this is thrilled with it because that double border that surrounds the Fleur de Lis wasn't an easy accomplishment.  Of course Betty persevered and the end result is the gorgeous window that you see below. 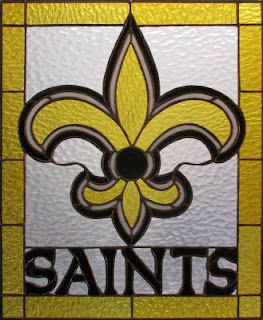 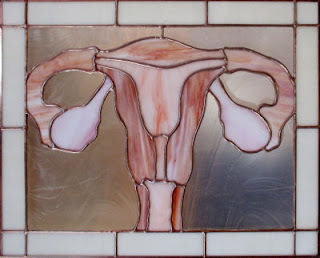 Angie made her own version of the size 3 Grinch with the only differences being the single border and the background glass.  You just can't lose with a happy Grinch! 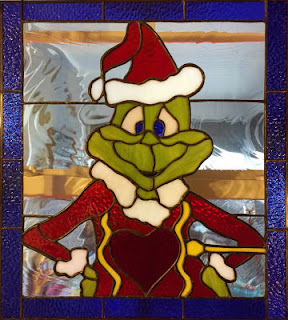 Belinda's Church Window looks like it's almost completely cut out already.   Well, all of the cuts that she can make right now have been cut however, the wooden slats that make the church itself will be cut after she's got this all fitting together. We'll show you what that's all about in a later post.

Linda F started working on a Witch Window and although it's December 2019 right now, I'm saying that she's early for next year when this will be completed.   With just the four pieces of her background left to grind I'm thinking that his will be finished before you know it. 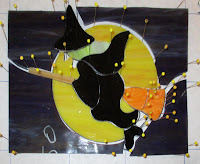 Lara's Victorian themed Window is moving right along and she's begun grinding her pieces already.   This window is about color and Lara has always had an eye for that.   Look out because this will be featured as a finished window before you know it.

And here's another window that is already colorful and impressive.   Melissa's begun grinding her Peacock Tail Window and has the first of 12(?) sections ground and fitting together perfectly.   A repeating pattern like this demands perfection because if just a single piece is off it will stand out like a sore thumb.  Mark my words though, this will be stunning because I have complete faith in Melissa
. 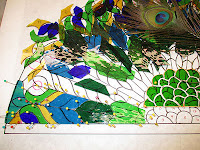 Okay so here we look at Shawn's Sunflower and Cardinal Window which she said would take her half of next year just to grind and do you know what?  It was almost been completely ground in just one night!   That's right-- Shawn only has a few more Sunflower petals left to grind along with a few pieces of background  and she'll be ready to begin wrapping which will surely take place in the first class of the new year, not the sixth month.  She's got this!

Now that we have an official finished measurement Cindy was able to get her border pieces all cut out.  They've also been ground and now she only needs to wrap and tack them so we can get a channel around this window and finish this up!

Jeff tacked together his Flower Scenery Window and is only missing one small piece of which no one has the glass for.  :-(  It's on order though so hopefully he'll have it in his hands during our next class.  Once that's done (or even if it isn't) it will be time to add a border.

Here's Barbara H's Bee Lawn Ornament all cut, ground and ready to be wrapped.  If she comes back to class with this wrapped she may very well finish this the next time we see her.  Alas, with Christmas and New Years here I surely won't hold it against her if she doesn't get this wrapped.

Jeanne L has been working on a Fruit Basket Window but I never seem to get a picture of it.   This week I snapped this while she was removing all of her pieces from the pattern so that she could pack it up and take it home with her.  Look closely and you'll see 4 pieces in place.

Tracey is about to embark on a round Magnolia Window journey!   This is a stunning window when it's completed and I have no doubt that Tracey will do a beautiful job on this project. 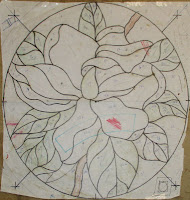 And Jan has begun working on a variation of this Red Fish pattern.   She traced it out and has her paper pattern all cut apart and ready to trace onto glass.  In our next post you'll see this with some color on it. 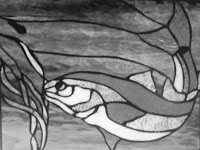 And that ends the calendar year of 2019.  We'd like to wish everyone a happy New Year, a Merry Christmas, a happy Hanukkah, and everything and anything else that applies.  We'll be back in about 3 weeks.