This week our tip is simple. The biggest fear that most students have is choosing colors for their project.  The easiest way to sidestep the issue is to simply copy the colors that someone else already used.  That's fine.  If you like a window the colors may very well be a part of the reason you like it.  However, there are times when you can't match glass and that's when people panic.  When it comes to picking colors there are very few rules.  I often hear, "Can I use this glass with this one?" And the answer is almost invariably 'Yes'.  The only real rule is that you don't want to mix translucent (clear) glass with opaque (solid colors) within the same piece of the subject matter.

Now what does that mean?   Simply put if your window consists of a flower, a stem, some leaves, a flower pot, a sky, and some clouds then you don't want to mix a see through pink and a solid pink for the flower petals.  It's fine to mix different shades of pink within the flower but they should all be either translucent or opaque. Mixing the two creates 'holes' in your work and that should generally be avoided.

That said, the sky can be clear glass because it's not part of the flower.  The stem and the leaves should match the glass you used for the flower.  Now the flower pot can be different but most times it will also match the flower.

You can have a solid sky and then go with translucent clouds because they are two separate entities in the same window.  As for colors, well, skies are generally blue but I've used purple, amber and even orange so as I said, there's no right or wrong here.

Finally, and mark my words on this.  The minute someone sees your color combination that's what they are going to swear is what they have to make theirs look like.  It's just the way things work out.  So don't be afraid to change things, just do it!  Start with a color you know you want to use, cut it out and then decide on the next color.  That's the best way to get a great looking window.

Ok, so first up we have Cindy's Sunflower window and just look at those three different shades of translucent yellows that she used for her flower petals!   Even the brown flower center is see through and that's what makes this window look so great-- it all flows together.. 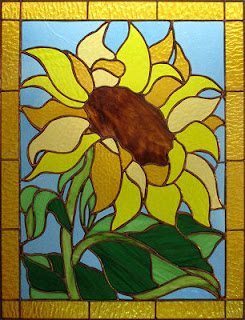 Then we have Linda F's Flower In A Teacup which looks like a fairly easy piece until you examine the handle of the cup.   To cut that she made sure that she cut the inner curve first and after that was removed she went around the outside edge of the handle.   We ALWAYS cut out our inside curves before removing any other parts of the glass because those act as support. Beautiful! 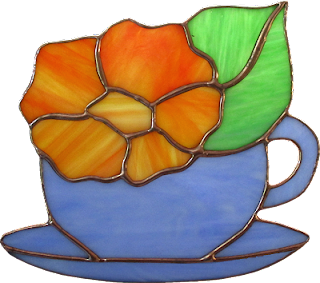 Lisa made this beautiful Sunflower while at hone-- she's got a brand new workshop and she isn't going to let it sit empty!  I love that she framed this piece in wood.  It gives it a nice finished look.  Wonderful! 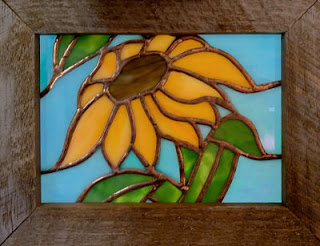 Mary Grace started and finished this LadyBug Lawn Ornament in class this week and then added some wire work to give the wings a little something extra.  This is a job well done! 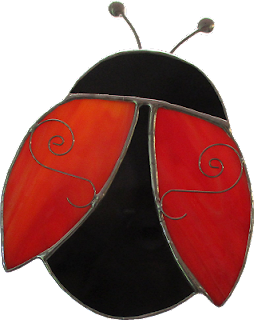 Our last completed project was made by Betty.  She sure loves this Lily Panel and it certainly loves her because I've haven't seen her make a bad one yet. 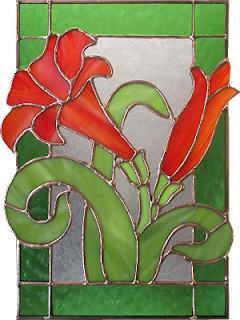 Now Cindy is working on a nice tall Sunrise Window and she's only got a few pieces of sky left to go before she can tack this and then work on a border.  This has to be a certain size when it's completed so she's being very careful that nothing crosses any lines which would then alter the size of the window.  Precision cutting is of the utmost importance when making windows to fit into an opening.

Meanwhile Lara got the border and a zinc channel attached to her festive Flower Window.   This is going to be one in a set of three windows with this being the largest of the three.  Seeing how quickly Lara breezed through this I can't imagine that the others will take her long at all. 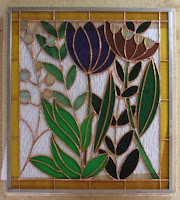 This week we saw Lisa begin work on a Butterfly Window with a bit of a twist.  Each of the four sections of the Butterfly's wings depicts a scene featuring a stage of its life.  Here you can see a caterpillar beginning to take shape around the outer edge of the bottom right wing.   These are tiny pieces but Lisa is moving through them with the greatest of ease. 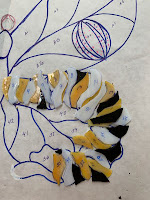 Susan D completed Ali the Dog a few weeks ago and now she's working on a Cat Window.  Maybe she'll do a donkey next, who knows.   But I wouldn't hold my breath if I were you.  This is another pattern that Susan D drew up herself and I must say that she does have the hang of this now. 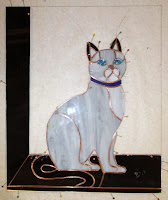 Look out because Linda L is back in action! It may have been a while since Linda  has been able to show up for class but she's retained every bit of knowledge that she's learned all the way back to day one.  Below you can see that she's cut out and ground two Baby Boy Suncatchers entirely on her own.  Talk about not missing a beat! 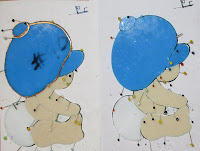 Belinda has her borders all cut out and she's just about ready to get that final border attached.  I never said a word but the standard question regarding this window popped up all on its own-- is that a shower head or a lamp?   There's no definite answer on that but I always look at it as a shower head.  With all of those windows who needs a light right?  But then again, at night you want a little light, right?  But it doesn't really matter at all because Belinda has turned this into perfection. 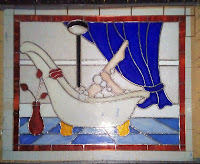 Linda F cut out, ground, and wrapped this large Owl Suncatcher while at home and after finishing up the work on her Flower in a Teacup she tacked this together and then began soldering it.  This will surely be completed upon her return.

Lastly I have a bad picture of Martha's Franklin Street Lamp which she wrapped while in class.  I forgot to take the picture and realized it while we were at the car so I pulled out my phone and snapped a number of very blurry images because my lens had fogged up!  I've sharpened this one up as much as I could and I think you can see that she got a lot done indeed.  She's just got about 7 pieces of background left to grind and then she'll move along to her border. 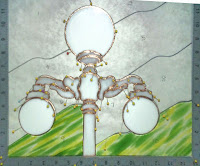 Okay so we were missing quite a few students this week but that was a nice way to ease back into the normal routine.  Hopefully things will be even more normal next week but we'll just have to wait and see.