Let's start things off this week with a very simple tip.  Most of us tend to use 3 sizes of foil:  3/16 (small), 7/32 (medium/regular) and 1/4 (large).  There are more sizes but these are the three most popular sizes.  Add to this selection the specialty colored back foils (in black and silver) each coming in 3 sizes as well.  In other words, there are a lot of foils to pick from yet we frequently fluctuate between a very small handful.

By now you've probably noticed that you own some foil that which you rarely use.  Here's something you may not know: Foil DOES have a lifespan.  In time the adhesive loses its stickiness resulting in foil that no longer sticks.   To make your infrequently used foil last FAR longer simply store it in a zip lock bag.  Just remember to squeeze out as much air as possible before sealing it.   I recently used a roll of 3/16 silver back foil that has been stored in a zip lock bag for about 5 years and it's still as sticky as the day it came off of the shelf.

TLDR: Store your rarely used foils in zip lock bags (I use one bag for as many rolls of foil as I can fit in) and you'll see your foil last for years.

So first up we have Jeanne L's Fruit Bowl Window which screams Traditional Stained Glass design.   At this point in time I have no clue how the pattern originated but it was drawn up by my Uncle in the early 80's.  I always have one of these in the shop because I love making it so much and because they sell well.  Jeanne did an incredible job on this and her end result is spectacular, wouldn't you say? 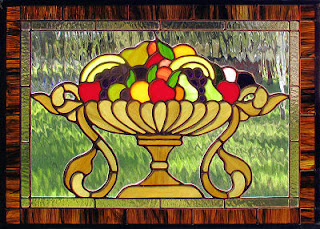 This is one of my favorite Angel Patterns and Angie more than did it justice with this soft, yet eye catching, pink color scheme.  Made as either a Window or just as a simple Angel Suncatcher (as I usually make this) it's a wonderful gift indeed. 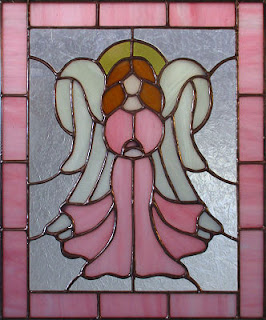 Here's Cindy's latest tray.  I'm calling it a tray but it's actually much narrower than a tray-- picture a napkin holder of sorts.  I've taken three pictures so you can see it more easily.  On one side there's a Frog and on the second side there's a Water Lily.   There's a mirror in between the two sides which runs along the bottom with a short piece of glass on the right and left side.   The lower most image shows what you see when you look at it from an angle.  Very charming indeed! 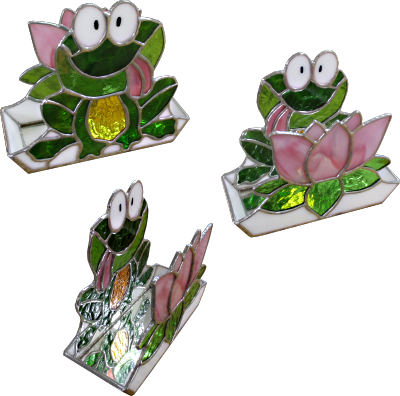 Cindy also started and finished a Cross Suncatcher this week as well.  You just can't lose with a cross. 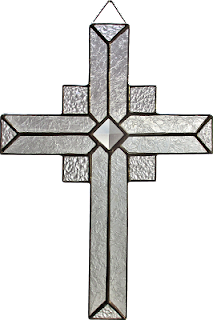 Then we have Susan R who finished her Red, White and Blue Star Panel which she'll be gifting to a neighbor of hers.  It was something that was mentioned in passing that they said they always wanted and Susan just decided to make this for them without telling them anything about it.  Way to go and I'm sure they are going to be thrilled with it! 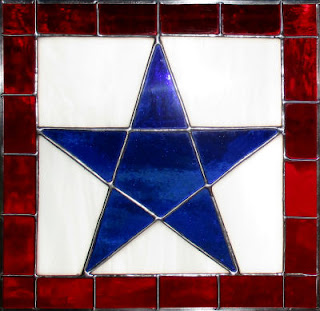 Address Windows are the rage and Mary Grace's wonderful rendition will only make them more popular.  But I need to riddle you this:
Q: When is an address window not only an address window?
A: When it's also the name of a famous pair of Levi's Jeans !

Here's Jeannette's latest Heron Window.  Although we've seen this design before there's something completely the same yet completely different about this one.  No, it's not the colors as they are identical-- it's the fact that this is a mirror image of her first rendition of this design.   Did we have to redraw the pattern to make this?  Nope, Jeannette simply flipped the pattern pieces over and then assembled her glass on the back side of the original pattern. 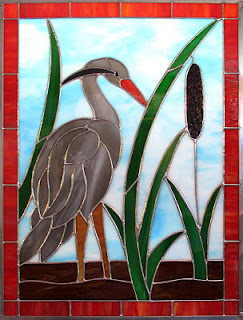 Jeannette also completed this lovely Beveled Angel Suncatcher and even has a second one almost completed.   Like the Heron above, her second Angel is a mirror image of her first one.  :-) 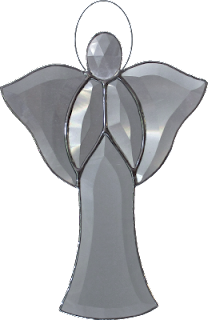 Linda F wrapped up the work on her Mardi Gras Mask Window.  You know, I just noticed that if you hang this upside down it's still a Mardi Gras Mask only with a mustache!   Wow, the things I see... 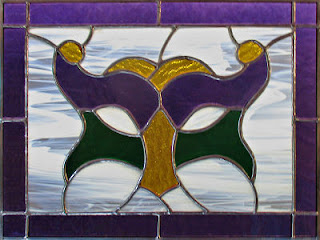 Tracey finished her pair of Heart Sunflowers and do they ever look great.  You just can't lose with this pattern and then when you factor in Tracey's stained glass skills, well, let's just say 'winner, winner, chicken dinner!' 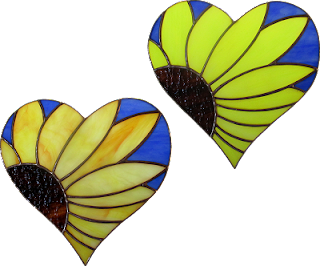 Linda L has her Hummingbird Panel just about ready to be soldered.   All she needs to do is wrap and tack her yellow border and then she'll most likely finish this up when she comes back in.

After completing her Mardi Gras Mask Linda F began work on a Dragonfly Panel of which she's almost completed cutting out. She's just got some green leaves left to go and this will be ready for grinding. 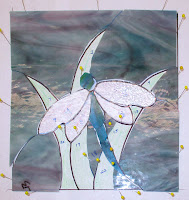 Ann is working on a hand mirror that she has all cut out and mostly ground at this point.   The mirror be added after this is all tacked together so we can cut it out perfectly and then just drop it into place.

Kerry tacked his Cross Window together and then went for an elaborate border system featuring a split border with diamond accents.   There's one border left to go on this and that will happen upon Kerry's return.

Cheryl managed to grind most of her Pelican Window leaving only the legs, post, and rope left to be fitted into place. Slow and steady not only wins the race, it gives you a great looking window as well.

Shawn has two more ornaments cut out for her Christmas Window just waiting to be ground.  I just love her colors and her use of exotic glass.  I really do believe that this will be done in time for Christmas.

With each passing week more and more of Sheri's Koi Window gets ground but that progress is very hard to see since she's got so much white glass on top of white paper.   She'll be grinding even more when she returns and after that she'll work on the clear background glass.

Martha is making a Pelican Window of her own and she started grinding her post and rope first.  She still needs to cut the feather for this bird along with the water and both of them are very detailed which means that there are a lot of pieces left to go which in turn means that she still has a lot of cutting ahead of her.

After completing her Sunflower Hearts Tracey began work on a new Butterfly Lawn Ornament.  She got it all cut and ground save for two pieces.   The only reason they aren't cut and ground is because she ran out of glass for those last two pieces-- but she does have more at home. 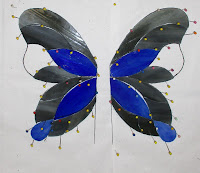 Speaking of leaving things at home,  Mary remembered to bring her background glass but forgot her pattern pieces!  So what's a girl to do?  In this case she cut and ground the 32 round and square accent pieces that will make up her inner border.  Now she's ahead of the game! 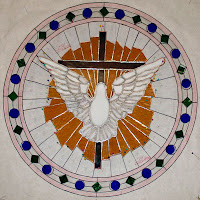 Here's the latest look at MiMi's many hexagons.   You see them as you want to see them— in the simplest terms in the most convenient definition. But what we found out is that she's got 790 of them cut out leaving her with about 1,100 left to go.  Whew! 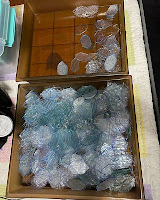 On the opposite end of the spectrum we have Annette's Double Fleur De Lis Window which now has all but four corner pieces left to cut out.   That means that Annette will begun soldering this when she returns or my name isn't Paul!

Lastly, though in no way in last place,  we look at Melissa's Fish Panel which is all tacked together and ready for solder. The front side has already been completed which means that this will be another finished piece to gaze upon in our next post. 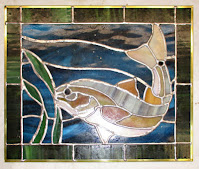 So there ya have it.  Let me tell you that it was another fun packed week with a new one on the horizon.
Paul
Bayou Salé GlassWorks