I Want a Brown Nose!

What does the term 'square' mean and how do we use a single metal square to draw a pattern?  'Square' mean a perfect right angle which is 90 degrees.   We want four 90 degree angles (each corner) to make a rectangular or square window.   It's what carpenters base window frames, door frames, walls,  rooms and buildings upon.  Below is your typical Square tool which is formed at a perfect 90 degree angle. Surprisingly enough, to draw four perfect angles using just one square you only need to use your square once.  Simply position the square on your paper and trace along the edges.  This will leave you with the following two lines as your starting point: 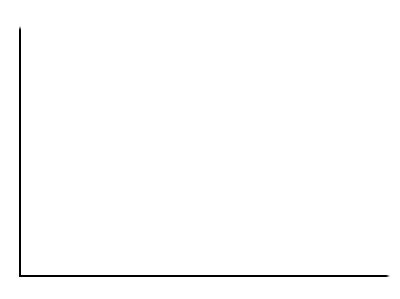 Next measure from the bottom left along the bottom line you traced and mark the width of your window.  Make another identical measurement near the top of the left vertical line and mark it. 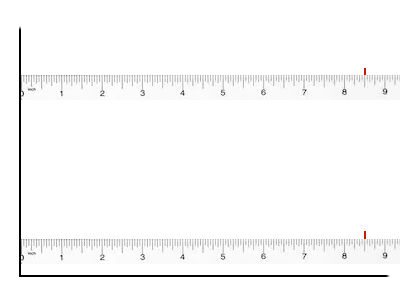 Connect the two marks you made with a straight edge (a yard stick works wonders for this). 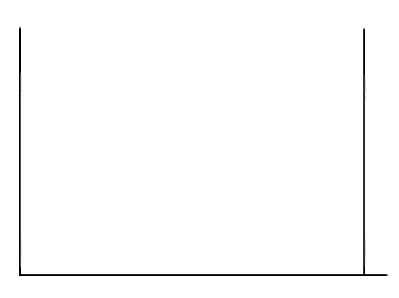 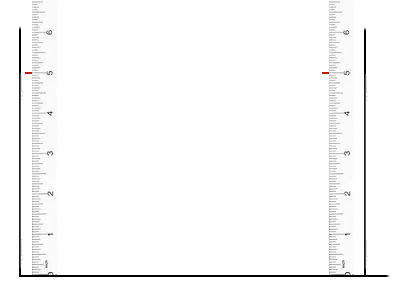 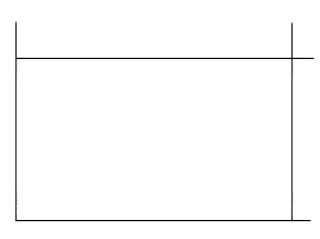 So first up we have Lisa's Tree Of Life Window which looks amazing.  As one of our newest students I have to say that her patience and work ethic put her right up there with students that have been with us for years. From the design, to the colors, to the cutting and right on out to the soldering I have to say that she went for broke on this piece and hit the jackpot. 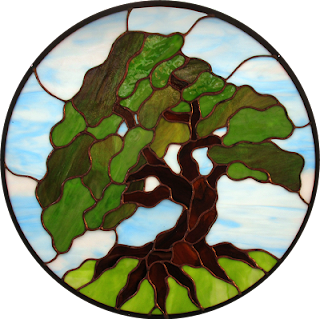 Annette completed her first (and according to her, her last) VERY large window.  At 42 x 27 inches it was a doozy but she filled the irregular shape perfectly with a pair of prospectively sized Fleur De Lis'.  She's happy it has been completed but in all honestly she had no problems making this aside from the stress of dealing with something this large. 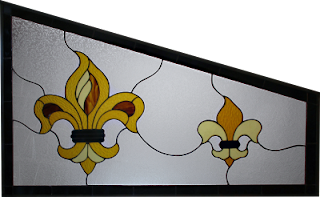 Susan R has made the first spinner we've seen in well over a year but the wait was worth it.  Her design features an open center in each of the six 3x3 squares that make the spinner.  Constructing the individual 6 squares is easy, but assembling them into one piece takes patience, time, and practice. 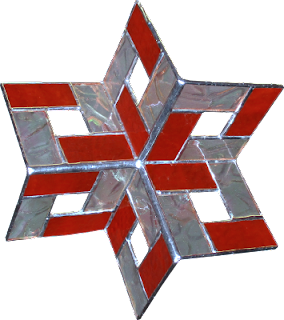 Jeannette made a Flower Angel that I haven't seen in ages.  I used to have a book full of these angel patterns but apparently it didn't make it during the move to Louisiana along with me.  Nonetheless, we have this pattern again and Jeannette is making a few of them over the weeks to come. 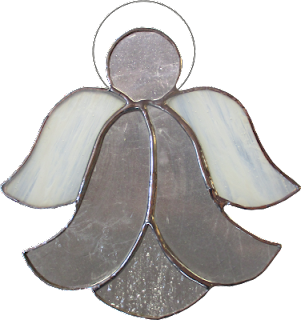 Jeannette also completed her version of the Reindeer Suncatcher complete with googly eyes.  At first we mentioned them as a joke but when we put them on for laughs we realized that they were no joke at all because they look great!  And so does Jeannette's Reindeer. 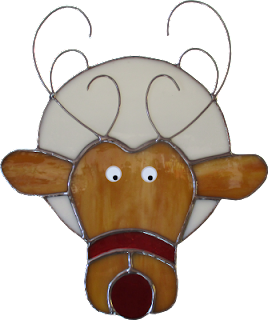 Betty's second Reindeer has the regular painted eyes along with a ore transparent moon behind it.   Why the moon?   It enables the wire antlers to be firmly anchored to the reindeer without fear of them breaking off.  Betty has the wire work thoroughly down pat for the antlers of Santa's favorite animals! 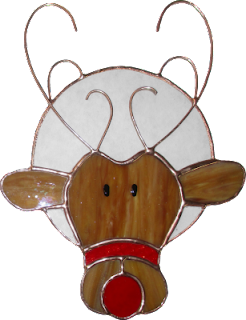 Here's Tracey's latest Butterfly Lawn Ornament.  This one proves that if you pick two colors that  compliment each other you can't go wrong with this pattern.  Also, Tracey's work speaks for itself, doesn't it? 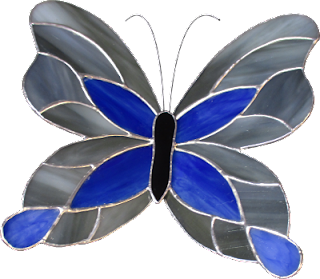 Me, I just can't leave well enough alone.   I've been making Flower Hand Mirrors for decades now (and there's no exaggeration in that statement) but when Roxie called me and ordered one I had to play with the pattern just a little more.  Without seeing the old pattern right next to this new version you'd be hard pressed to find a difference but they're there nonetheless.  I made this using just four colors of glass, most of it being scrap glass and I'm very happy with the end result. 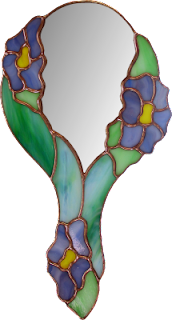 Cindy has started work on a very interesting and complex window.  Based on an M.C. Escher drawing we are calling this The Spiral Marble.  The cuts along the top and the bottom of this piece are VERY complex and I'll give you a better look at some of those cuts when we return next week. 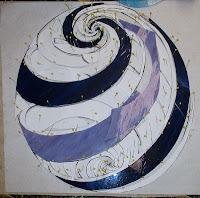 Linda has begun work on her LSU Lamp and she's getting the two hardest panels done first.  Each tiger face has about 35 pieces in it with the mouth containing the smallest of pieces.  Oh, and the tiger face is only 5 inches wide!  These guys are all cut out but when you deal with small pieces you end up grinding them into shape more so than cutting them.  So far, so good. 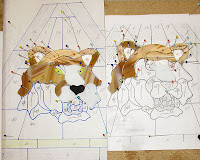 Susan D made a few of these Reindeer last year and now she's decided to make a complete set.  She's already well along  with her two newest members of Team Reindeer having one of them completely ground and ready to be wrapped.  These will be lawn ornaments so she'll be skewering them onto stakes once they're soldered.

Martha's Pelican has all but his back feathers cut and he's already got the look!  The glass she's used for the water is a perfect compliment for a pattern of this complexity which helps give it that LC Tiffany feel of richness and elegance.

Bee has the majority of her Doggie In A Bathtub Window cut out and she's now begun grinding it.   She still has to cut the dog itself out of glass but wants to attack that after everything else has been fitted together.  She's also going to cover the feet of the tun and the pole completely in lead.  It's a fun technique and done correctly it looks great. 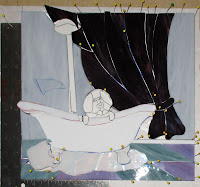 MiMi now has 1,350 hexagons cut out and all I can say is that she probably needs a new cutter head.  She's going to stop at this point because without actually having the door frames in her position she's unsure of exactly how many of these little suckers she'll actually need.  We both assumed around 1,800 but at this point she doesn't want to cut out any more than she needs to.   I guess she'll begin grinding at this point. 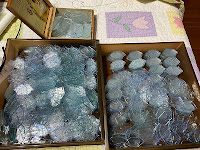 Mary brought in the glass for her final outer rim of background and  has it all cut out with the majority of it (a good three quarters of it) being ground already.  She hopes to have this tacked and ready for it's first inner border when she comes back in.  She's literally flying through this complex pattern. 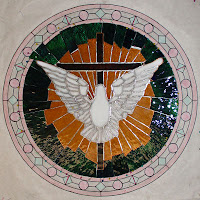 Our second Pelican Window of the week is up next and although it may not have the detail that Martha's does it's just as beautiful.  Cheryl has it all tacked together now and got her inner border attached which just leaves her with one border to go before she can begin applying a final bead to her lead lines to finish this all off.

Sheri is 'this close' to cutting out her background glass as she has the majority of the subject matter of her Koi and Water Lilies ground.  It won't be long now.

Two to go!  The background of this window will easily be cut in just one class so if Shawn can get those last two ornaments cut and ground we can get that background cut out two weeks from now.  I love how colorful this is!

Tracey is our Butterfly Lawn Ornament queen and this is her latest color combination.   I guess you can say that Tracey is on the Butterfly Express! 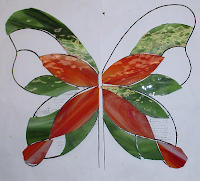 This week Angie got her background and her border pieces all cut, ground, wrapped and tacked together.  She even got the front side of her new Angel Window all soldered and then flipped it over to start the back side as well.  Consider this finished because when she comes back in there's very little left to do on this. 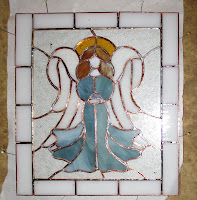 When only two people come in for class a LOT can be accomplished.  Take, for example, Kerry's latest Cross Window.  He's only going for a single border on this one and he's omitted the accent pieces but in just one night he got this all cut, ground and wrapped!  Now that's what I call making quick work out of a window and it means that he'll easily have this completed in time for Christmas as he'd hoped. 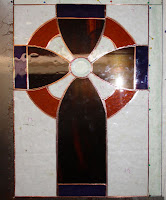 And in the end we look at another Hand Mirror that Ann began work on this week.  She's altering the pattern ever so slightly to incorporate some round pre-cut mirrors to hopefully make things a little easily each times she makes these.  She got this all cut out and partially ground in just one class so she'll be wrapping these pieces when she comes back in. 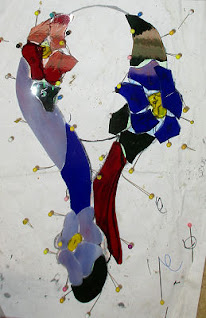 So there you have it-- all the work that was accomplished during Thanksgiving week.   We had a few absences due to the Holiday but all in all we stayed busy and got a lot accomplished.