If That's What Makes You Happy

Lately we've been having issues about measurements.   Sometimes students tell me they want, for example, a cross window that's 16" x 20" with two borders.   When I give them their pattern they measure it and say that they mean that the cross part should be 16 x 20 with the borders adding to the size.   Sadly, that's not the way it works.   The measurement is the finished size of the window not the inner part of it.  Borders change size depending on the size of the window so you can never know how much extra space borders will take up.  Consequently, measurements should ALWAYS include the borders (and channel) as measured from by the red lines, not the green lines, in the picture below.  Measurements are the overall size of the completed project. 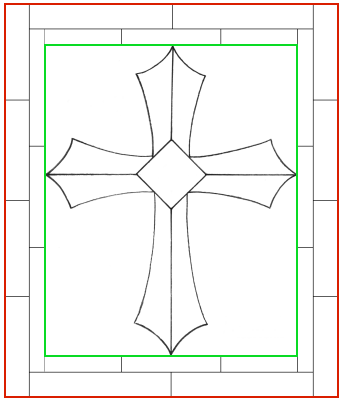 First up we have Rowena's Ballerina Window.  People have asked me why she didn't make the dress pink but Rowena's grand daughter always dances in grey thus the color choice.   Now that we see it completed you have to admit that this Ballerina looks INCREDIBLE in grey.  And look at that perfect border glass that she picked-- Stunning. 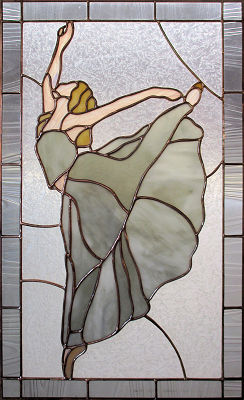 I have to say that Cheryl walked out the door with an incredibly affecting Pelican Window.   With each phase of the creation of this project Cheryl got to see that slowing down is the key to making a great looking window, which is EXACTLY what this is. 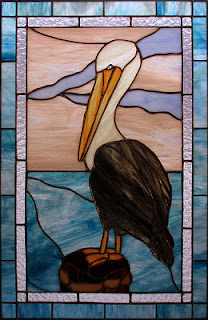 I haven't seen this Angel made in probably over a decade.  It was nice to see Barbara H dig this out of the holiday pattern drawer and make it again.  As far as I know it was drawn by my Uncle back in the 80's.  The pattern is tattered and torn but you can easily see that it's the paper he originally designed it on.  His patterns always had a flair to them as can be seen in the beautiful angle that this Angel follows. 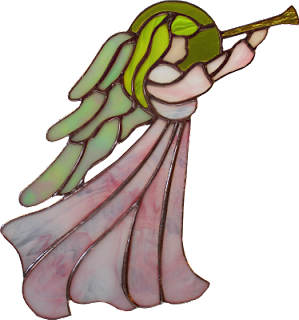 Kerry's got this window down to a science now since this is his third rendition of it.  He's changed the amount of borders and their complexity in each of his Cross Windows with this one featuring 5 piece corner sections.  Honestly, I can't believe how wonderfully the border photographed in this-- usually this glass looks VERY dark to the point of being black.  What you see below is truly how great this window looks. 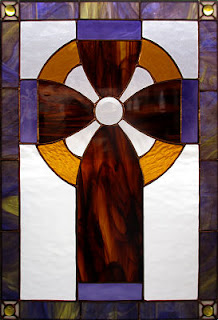 Annette got four more Baby Angels finished but only because she's been working so diligently on these throughout the week between classes.  I think she has four more to go before she can breath easier and if she has them wrapped before she comes into class I think she's going to get them all completed. 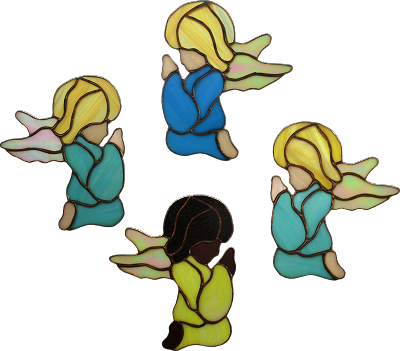 Ann put the finishing touches on her latest Hand Mirror before moving along to another Rose Bud Window.   These are always popular around Christmas and Ann's work is impeccable as usual. 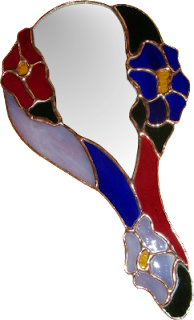 Our last completed piece this week is Tracey's final Butterfly Lawn Ornament.  I'm sure she'll be making more of these in the months to follow but she says she's finished with these for the time being and will be moving along on stained glass roads that she's traveled less. 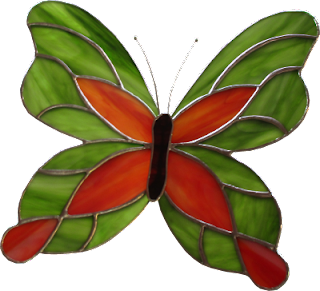 Angie pulled out this Snowman pattern last week and this week she has it all tacked together already.   This will surely be completed when we post our last blog of the year next week and I think it's going to look even better than it already does. 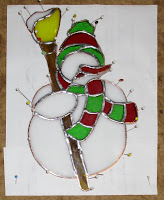 Beth B already has one of her fish all ground and ready to be foiled.  She also has a second one about halfway to the point of completion.  If she can have one of these wrapped we'll surely see one of these completed in time for Christmas.  If she has them both foiled, then we should see both of them finished.

Betty, always one step ahead in the game, is working on a Mardi Gras Mask Panel as well as three Christmas Tree Ornaments.  The trees only need wire work to finish them off and Betty plans one doing that before she comes back in.

With her buildings cut and ground (save for the roofs) Lara is all set to begin cutting all the windows for her window.  After each of them has been cut and ground (about 30 of them) she'll wrap them and then trace them into their places on the houses.   Once she cuts off the lines she's traced things should fit together with only the lightest amount of grinding necessary.

At the very last moment of class Cindy got the last piece of glass ground for her Escher Spiral Marble Window.   She's on fire with this piece so I can't wait to see how much she gets wrapped when she comes back in.  If you want to talk about a design that flows, this is it! 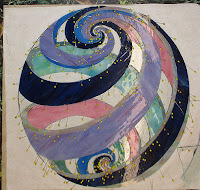 Sheri is officially finished with the grinding of all her Koi Fish and Water Lilies.  She's missing about  5 pieces that she'll need to re-cut but the rule of thumb is to leave those spaces empty and then fill them in after the window has been tacked together.  That means that Sheri can either begin wrapping or begin cutting out her background glass when she comes back in.

Jan's almost ready to begin grinding her Santa Claus and will do so after she cuts the remaining pieces of Santa's face.  Nice red and green colors really make this window...stand out.

Helen got the border attached to her LSU Window and even finished soldering the front side of it.  She has a Nicholls Window in mind for her next project and I'm sure we'll see that next week because this will surely be finished by then.

This is just one of four panels that Linda L needs to make for her LSU Lamp.   Last week she had two tiger heads cut out and had started grinding them but this week she has one panel almost completed.  Not only that but she also has the second tiger head tacked together as well as two LSU logos which means that she only needs backgrounds and borders cut out at this point.   Linda is moving along quicker than a wildfire!

This week we got to see Lisa begin making these four ornate Cross Suncatchers.  All they need is solder at this point in time and I have no doubt that she'll have these completed when we next see her.

With all of her background cut and ground, Shawn spend her night wrapping pieces of clear, textured glass.   She's about halfway through with that and I'm thinking that we'll see this get a border when she returns to class.

Martha's Pelican is now officially completely ground but she doesn't care for the grey that she used for the center feathers running down his/her back.   I'll admit that the color change is somewhat bold in the picture but when the two shade of grey are back lit the color difference is far more subtle than what you see here in the picture.   We'll see what Martha decides to do when we return.

Susan D has three Reindeer in the works-- one which is completely ground, the second one about 90% of the way to being completely ground, and the third one just needs to have a body piece cut out and ground.  That's what I call progress!  I'm just worried that these might be some of  the reindeer that never let poor Rudolph join in any reindeer games.  :-/

Then there's Susan R who has the front and back sides of her birdhouse all tacked and soldered.  That means that these will get joined together next week and then she'll be able to work on her two roof panels. 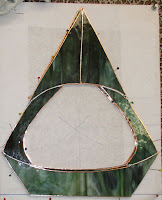 Is that an Egyptian Symbol Window that Mary Grace is working on?  Nope.  it's the back side of her 112 Address Window.   She got her border attached this week and she got the front side soldered as well as some of the back side.  Yep, this will be ready for Christmas for sure.

Last but not least we take a look at the Gingerbread House Window that Linda F is going to begin.  If you look closely you'll see that there are numbers on the pattern which is a telltale sign that the pattern has been traced onto poster board.  And that's exactly what Linda did.  She's got her glass all picked out and this pattern will have some cut glass on it when we see it next. 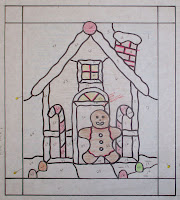 We only have one more post to go before we call it a year here at the shop.  There are still a few projects racing to be finished before Christmas so in our last post of the year we should have quite a few finished pieces.   Be sure to come back next week to see which ones they are.
Paul
Bayou Salé GlassWorks
Posted by Bayou Salé GlassWorks at 5:45 PM