When soldering suncatchers a common problem is seamlessly joining the lead lines to the edge of the piece.  The general cause of the problem comes from moving the tip of the soldering iron too far to the edge thus dragging the lead over and off off the piece.  Just remember that the heat from your iron  radiates outwards from the tip.  You can (and should) actually stop moving your iron when you get to about a quarter of an inch from the edge of your project.  Once the iron stops moving you can easily watch the solder continue to flow outwards to the edge of the glass all by itself.   Once the lead reaches the edge gently lift your iron off of the glass and you'll have a perfect join every time.  Remember, practice makes perfect.

First up we have MiMi's first Hexagonesque Door Insert now completed and fitting like a glove. (I guess we won't be acquitting).   This is one of many more to come and we'll be seeing these coming together in all different sizes over the weeks and months to come.  In fact, you'll be seeing another one in this exact same size a little later on in this post. 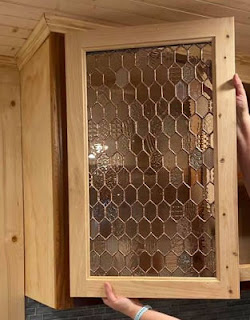 You say Bird House, I say Bird Feeder!  Either way this is a wonderful design and the multi-colored roof is what really sets off Susan R's latest project.   The next one may be done a little smaller but even though this was larger than most people thought, it works wonderfully. 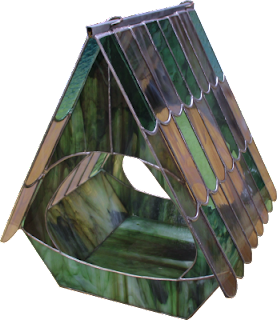 Linda L made a wonderful Masonic emblem as a Lawn Ornament which brought up a number of questions.   Here are the answers:   Freemasonry involves the teachings and practices of a secret fraternal (men-only) order of the Free and Accepted Masons (the largest worldwide secret society.) Spread by the advance of the British Empire, Freemasonry remains most popular in the British Isles and in other countries originally within the empire.  Also, the 'G' in the emblem stands for 'Geometry under the Great Architect of the Universe'.  So mote it be. 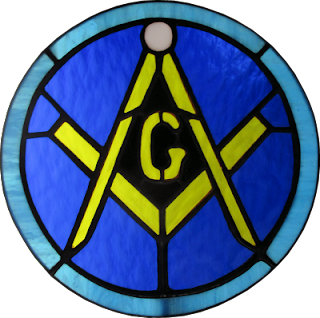 Cindy has four more suncatchers under her belt as she put the finishing touches on a purple and gold Fleur De Lis, a very stylistic tulip, a purple, green and gold Mardi Gras Mask, and an Angel complete with a wire halo.  It's the small things that sell the quickest and Cindy understands that perfectly as she makes items to sell. 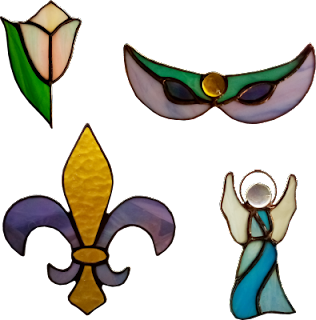 Helen made her first Swirling Christmas Tree this week and she plans on displaying it in an easel rather than hanging it in a window.  Since we didn't have the easel in the shop we weren't sure if a jewel would fit on the lower right of this stylish suncatcher sooooo we left it off.  It can always be added later on however, this looks great even without it. 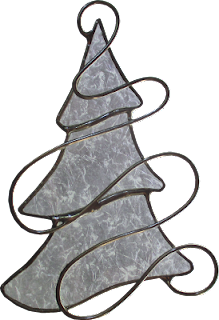 Barbara H got her three Tulips pattern this week and I think it works very well indeed.  With her flowers already cut out there are only a few pieces left to go before she begins grinding this 6 x 6 inch window!  She's requested a Louisiana Iris for her next project which means that this is part of a series of small flower windows. 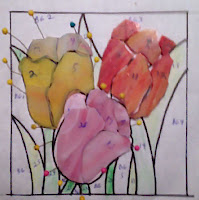 Bee has begun work on a new Flower Window using four colors that always work together perfectly.   You can't lose when you combine blue, green, red, and yellow/amber.  Throw in some purple and you have the colors that make up the backgrounds and borders of most church windows and they pick those colors for good reasons. 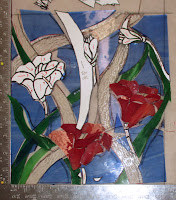 Ann's large Cross Window is really moving along quickly.  She already has all of the cross cut out as well as the two-toned brown corners that that changes the shape of the overall design from oval to rectangular.  After all of these pieces are ground and tacked together she'll cut the clear background glass using the cross itself as a pattern thus ensuring an absolutely perfect fit. 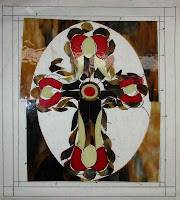 Cheryl's up to the clouds with the grinding on her Lighthouse Window.   I'm still impressed with that sky glass and I won't forget about it the next time I make a window that features a prominent sky. 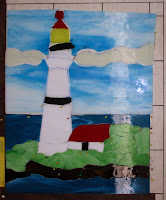 Melissa's Wine Cats Window is really taking shape now.  She has almost all of the lower left corner ground as well as the plant section in the lower right.  Once the bottom half of the window is ground the top half will go quickly since it only consists of a dozen or so pieces.  The end is near. 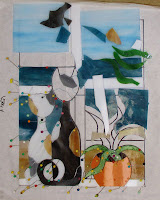 The top sections of Kerry's Nicholls Logo Window features their mascot which is clearly visible now that Kerry has a night of grinding under his belt.  In fact, next week I'm thinking that we'll see this with some foil on it if not also tacked together.

Here's a look at the Butterfly Lawn Ornament that Mary Grace cut, ground and finished wrapping during class.   She'll surely have this soldered upon her return so look to see this amongst our completed projects section in the beginning of our next post.

Lara has five buildings in her Townscape Window and now two of those five buildings have their Windows and doors.   That leaves three to go and I know that she's finding these easier and easier to cut and fit into place now.

This is Linda L's next project and she plans on making a LOT of these.   All she's doing is bordering a clear diamond bevel with colored glass after which she'll etch initials into the center of the bevels with etching cream.  These are going to make wonderful personalized gifts. 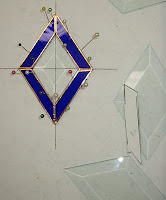 With all of her glass officially cut out, Tracey is ready to begin the grinding process. Alas, as you can see there won't be much grinding necessary to get this window to look like a Cardinal because that's as plain to see as the nose on your face. 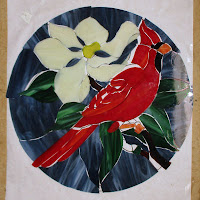 Sherri has all of her background glass cut out but since she went with a lightly textured clear glass it's very difficult to see in the picture.   She's already begun grinding all of those pieces and once that task is through she'll have to decide on what color she'll be using to border this window.

And here's a look at MiMi's next hexagon window all ground and more than half way foiled.  It appears to me that once the pieces are all cut out these windows come together pretty quickly for MiMi. 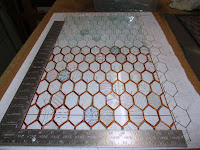 Angie has her newest Address Window all tacked together and ready to be soldered.   Once that's done she'll add some zinc channel to surround it and call this a done deal.

Betty just can't seem to shake that ol' Christmas Spirit as she works on more Swirling Christmas Trees and some Angels as well.   All of these have been cut out in assorted clear textured glasses and that may suggest that Betty plans on leaving the lead silver on these which is always nice with clear glass. 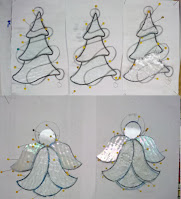