That brings us to what this is all about.  I watch students try to cut the lines that they've traced onto their piece of glass while sliding their cutter across the glass at nearly the speed of light.   There's no accuracy involved at all and it just leads to much more grinding later on. 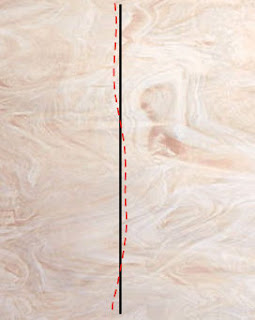 Start with your cutter wheel on the glass and AGAINST THE LINE.  Then S..L..O..W..L..Y run the cutter across the glass following the line whether it's straight or curved.  Again, follow the line, it's there to tell you where the cutter head should be!  Ideally you should be cutting the line off of the piece you are saving as you can see in the triangle below.  To cut the line off simply follow the inside edge of the line with your cutter wheel. The image below is a perfect example. 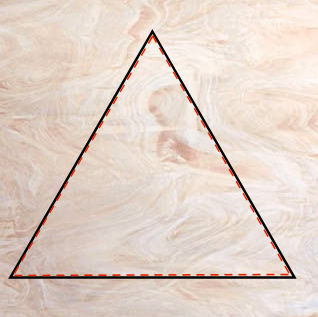 So, in short, take your time while cutting.   Cutting goes quickly no matter how slow you go.  You can accurately cut almost any piece in less than a minute but I often watch students grind a single piece of glass for up to 5 minutes.   Relax.  Take your time.   If you relax while cutting your glass instead of rushing through it you will EASILY be able to relax at the grinder and spend much less time there.

Okay then, here's Kerry's Nicholl's Mascot Window all finished and looking very cool indeed.  It's not often that you see a dog with sunglasses but this guy makes it work just as Kerry did in making this window.  Whenever we have two (or more) subjects that will be separated by a border or a straight line we make them independent of one another and then join them when adding the border.   If you aren't following what I'm saying just go back a few weeks and watch how Kerry made this week to week. 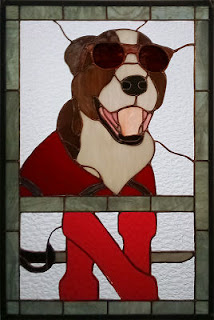 Linda L is going crazy with her Cricut Cutting Machine and is using it to make stencils so she can etch things onto clear glass using etching cream. This charming panel is her latest creation and it was made to be displayed in the Southern Chaos store front window. 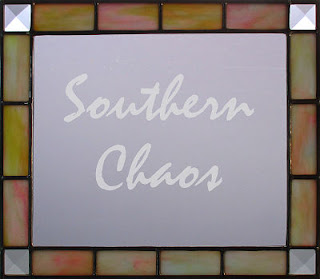 Last week Bee said that she wanted to try making a box and this week she learned just how to do that.  This sweet little 6 piece Box (it's just one box pictured in both its opened and closed positions) went together quickly and efficiently and even has lead feet on the bottom corners.  I'm thinking that Bee will be making a few more boxes so expect to see more similar designs over the weeks to come. Sheri took a small break from her Koi Fish Window and began and completed this cute Honeycomb suncatcher.   It's a great way to use up your amber pieces of scrap glass and if you haven't realized it by now, honeycombs are the rage! 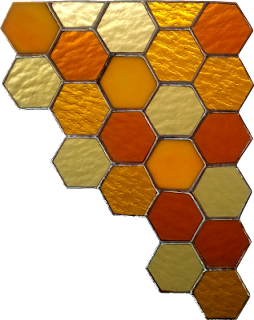 Somehow (actually I know exactly how) Linda F's Christmas Gingerbread House was skipped last week.   Had I included it in our last post the text would have said something about her moving along at a nice rate of speed and having her project halfway ground.  This week I'm pleased to show you her completely ground Gingerbread House.  The Gingerbread man himself will gain some features using white glass paint once this is finished and that surely won't be long now. 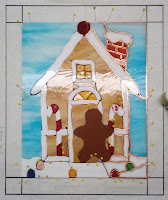 Cindy's  highly detailed Butterfly is bigger than a suncatcher but smaller than a window.  In all honesty I never know how to describe pieces this size.   That said, Cindy's Butterfly has more pieces in it than window twice its size but she already has 78 of 137 pieces cut and ground already.  Anyone who counts differently and proves me wrong gets a gold star. 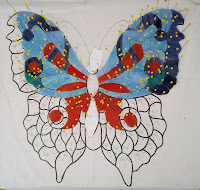 After finishing up the work on her Southern Chaos Sign, Linda L  headed over to the grinder and managed to get all but 7 pieces ground for her Cross and Flag Window.  She had the option of making things easier by adding to lead lines to make cutting and grinding easier on two pieces of the stripes but she decided to make the more difficult cuts and avoided making extra unsightly lead lines.  This project is almost finished now so the end is near. 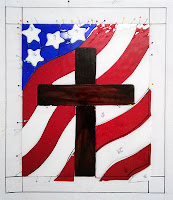 Judy M is really on a roll.   Two weeks ago she cut out her entire Cardinal Window and then last week she completely ground it.  When she came into class this week she had everything wrapped in copper foil and managed to tack it and get the front side soldered.  With only the back side left to go I have no doubt that she'll finish this and start her next window when we see her again.  Oh, and her soldering is absolutely wonderful!

Betty is another student who is on a fast track.   In this class session we watched  her assemble and tack together her Transom window and then add a zinc channel to it.  Normally we don't apply channel this early but this window has no border to strengthen it so the channel will allow her to easily lift it up to flip it over to solder the back side.

After finishing up her Honeycomb Suncatcher Sheri worked on attaching a mixed border of bevels and granite back glass to her Koi Fish Window. All that's left to do is fill in a few pieces of glass that are missing and then Sheri can begin the relaxing soldering phase of her window making.  She's close to the end now and looking forward to making some smaller projects after this.

Lara has all of the windows and doors cut out for her Street Scene Window and only has to wrap the pieces of the blue house on the left before she can tack this all together and then cut out the roofs and the sky.  This window taught me that although I say it all the time, 'rooves' is NOT the plural of the word 'roof'.  It must be a Pennsylvania thing.  You learn something new every day, huh?

Then we have MiMi who is working on soldering the back side of her latest Hexagon Window.  She got her front side soldered during class and her zinc channel was added so she could possibly finish this off at home.  Now that this is off of the pattern she plans on getting more pieces ground and fitted for her next size set of windows.

Meet Mr. Bingle.   Originating as a mascot of the Maison Blanche department store in New Orleans, Mr. Bingle was also used later on by Mercantile Stores and Dillard's.  If you are from or familiar with the New Orleans area you probably know Mr. Bingle.  He is a part of Cheryl's childhood and something she wanted to immortalize in glass so she's begun work on this HUGE Mr. Bingle Window.   This week she traced her pattern and next week she'll start cutting glass. 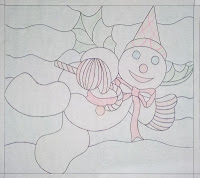 Once again the weather did not mix well with our classes so we were considerably short this week.   now that things have warmed up and roads aren't being blocked I'll guess that our class attendance will return to normal again for our next post.  Come back again next week and see for yourself!