I'm More Worried About Others Smelling It

One problem I see repeatedly are border pieces that aren't straight.   In our classes we cut borders with a strip cutter which means that all of our lines start off perfectly level.   Sometimes when these pieces come back from the grinder they look like the top edge of the top piece of glass pictured below.  This happens when you apply too much pressure against the grinder wheel.  The glass gets 'hung up' and creates ridges and ripple along what started out as a perfect straight edge.  Simply ease off on the amount of pressure and your piece will slide evenly and smoothly across the wheel all the way to the end.

Another problem I see occurs when students stop putting pressure against the glass before the glass comes off of the grinding wheel.   This results in flaired corners as pointed to by the arrow below.  You must carry completely through on your pressure until the glass slides off of the grinding wheel to prevent these flairs.   It may not seem like much but little things mean a lot in relationships AND stained glass. 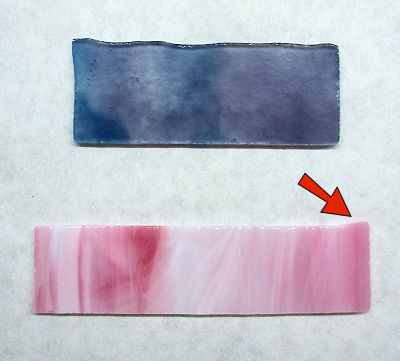 So then, first up we have Cindy who came in and washed and colored her Pelican window.  Alas,  it took a little longer than I expected it to but only because she colored it black .   That should tell you  that we let it sit with the black patina on it for 45 minutes before she washed it off.  One the 45 minute wait was over with she rinses the patina off with water, dried the window and then cleaned it good with vinegar and a toothbrush.  No wax required. 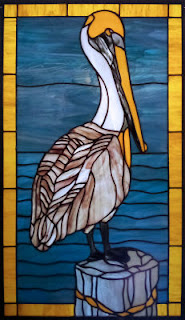 Susan D's Winter Window was completed and it fit perfectly in the wrought iron frame that she made it for.  With this being such a complete success I think we'll be seeing more of these seasonal panels being made by Susan over the months to come. 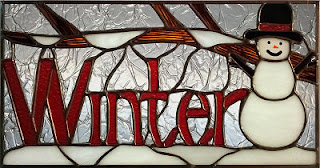 Shelley finished her Dolphin Window and doesn't it brighten your day?  She drew the pattern herself making a few adjustments here and there from a circular window that she'd seen online.   I have to say that she did a very good job in all aspects of making this large suncatcher. 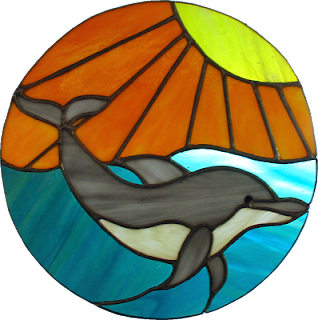 Kerry completed his Unicorn Window and all of that iridized glass helps the viewer instantly recognize that this is no ordinary horse.   The eye on this Unicorn is the most important part of the project because if the eye(s) aren't perfect then the entire window just looks off.  In this case the eye is perfect because we left it blank and then adjusted it after everything else was tacked together.  This allows us to be absolutely certain that nothing will twist out of place and looked cockeyed. 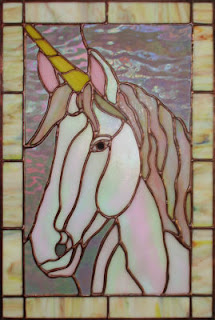 Then we have Betty who put the finishing touches on her latest Sunflower Heart Suncatcher and can now essentially make these in her sleep. 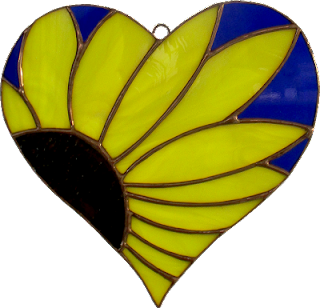 Linda F's Bears Around A Campfire Window is all ground now and looking for a little foil action.  Every time I look at this I think of Yogi Bear and Boo Boo.   Even at this stage you can see that this is going to be one sweet window when it's finished. 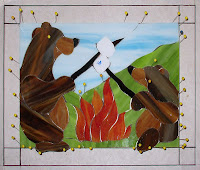 Cindy has begun making our first Bicycle Wheel Spinner here in the shop and since she's in the second class of the week just about everyone saw this under the table and then told us that they have old wheels at home that they would like to add glass to.  Leave it to Cindy to start a trend. 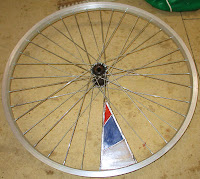 Kerry has begun work on a much smaller version of the American Flag and Eagle Window that has been so popular here in our classes over the years.   Although the pattern may lead you to believe that this will be made as a pentagon it actually will be set into a larger rectangular window.  Also, what you see below is only about 8" wide.

Annette got all but the background cut for her Falcons Skull Window.  This is gathering some severe reactions in our other classes due to the subject matter.  Everyone is horrified that she's making a Falcons Window!  (Long Live The Saints!) 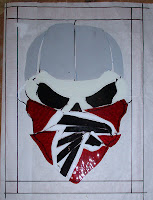 Betty is nearing the end of her second Garden Gnome Window.  As you can see, the star is his hands makes this fitting for the fourth of July.   Betty was concerned that you couldn't see the star as she originally cut it but that was only because she used the same glass for the star as she did for the beard.   She replaced that small section of star with a wispy white glass and now the star is visible.   That said, once this is soldered the star will have much more definition. 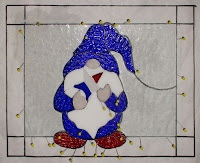 Tracey has her newest Butterfly Lawn Ornament cut and ground.  All of those tight inside curves didn't bother her at all.  She's taken it along home with her so she can wrap it and hopefully (definitely if you ask me) finish this when she comes back in. 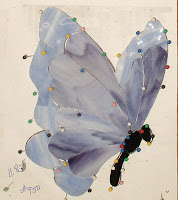 Lisa now has the first panel of her new set of Lantern Inserts pretty much ready to be soldered because it's all cut out with only 2 pieces left needing to be ground.  She's already begun panel number two and is well on her way to finishing the keys on that section.  One of the things we changed was the depth of the keys by reducing them by 1/3 of their originally drawn  height.  Also, this week I remembered not to cut off the fourth Treble Clef Panel so now you know what it looks like.

Melissa had her Cardinals all wrapped when she walked in the door and immediately began tacking them together so she could place them on top of her Fractures and Streamers background glass to trace around.   We wanted to maintain the flow of the lines in each of the streamers but the piece of glass we had just wasn't big enough.   We cut the largest connecting pieces first and ended up judiciously picking sections of glass so they would match up nicely.  In the end I don't think anyone would ever suspect that Melissa's background  wasn't actually cut from one contiguous piece since the streamers all connect beautifully. 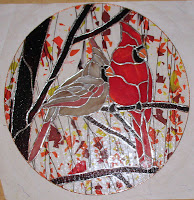 Judy finished cutting out her Texas Cowboy Boots and then moved along to the grinder where she spent the rest of the night shoring things up by fitting everything together.   She's doing a great job and is picking up the ins and outs of grinding very quickly. 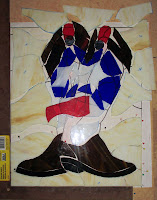 Bee's Cardinal is sooo very close to being completely cut out.  I'm not sure what she plans to do for a border on this but I think something that already looks this good should probably get a double border.  She certainly doesn't have to do that but the WOW factor of this window could go even higher withtwo borders. 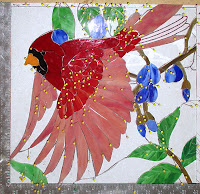 Mary was a cutting machine this week as she managed to get most of her Red Fish cut.  She's very unsure about the orange she used but I don't want her changing it until she sees what it looks like with all of the background glass that surrounds it cut out.   Sometimes colors appear brighter when they are surround by the white pattern paper.

Barbara may have come in a little late but she still managed to wrap all of her Louisiana Iris Panel, tack it together, cut, a border for it, wrap those border pieces and tack everything together.   Whew!  This will be completed upon her return for sure! 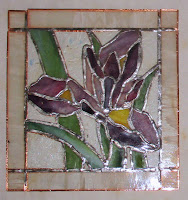 Here's the latest view of MiMi's Hexagonesque Window.   It actually resembles a field of Pins and glass from this angle.   Each piece is within the black lines of the pattern which means that this will maintain all of the straight lines that run rampant throughout this window even after it's been foiled. 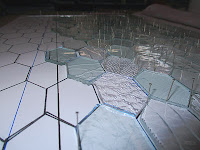 Linda F also got a Sunflower Hoop Suncatcher all ground and halfway wrapped before she called it a day.   It won't be long until these beautiful orange toned Sunflowers see some sunlight. 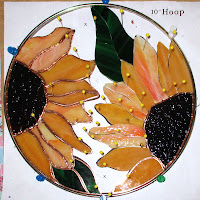 Martha was busy grinding her Pelican Window and she's ready for some foil now.   The hardest part in grinding this was the bottom section that she ground last week.  That explains how she managed to get the rest of this fitted together so quickly this week-  the hard part was already done!

Lastly we look at the Scuba Diver Pattern that Shawn traced out  and will begin cutting glass for when she comes back in. 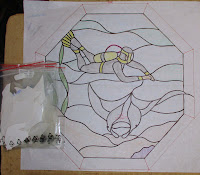