Tip of the week: 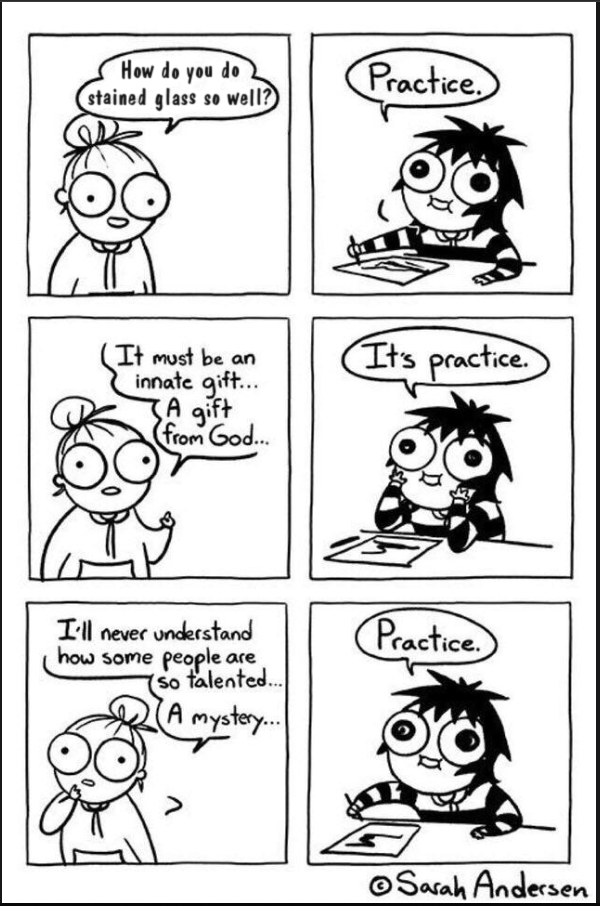 First off this week, Judy completed her Scales Of Justice Window and now that it has some light behind it you can really appreciate the deep, rich color choices that she made along the way while making this piece.   Truly stunning. 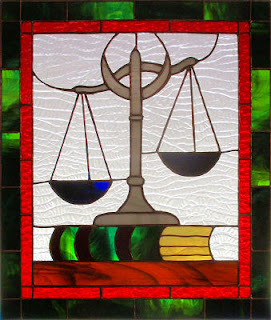 Jeanette finished her Heron Window and her use of Baroque Glass for the background and her excellent piece placement allowed her to achieve a background whose texture flows seamlessly across the entire background from piece to piece.  Even that feat, however complex it may appear, becomes trivial when you take this window in its entirety because her work proves what constant practice can accomplish. 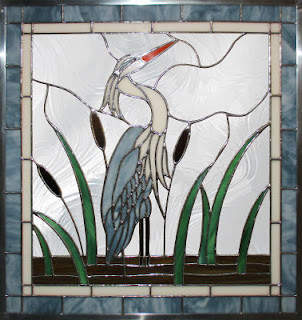 Susan R completed her spiraling Easter Egg Wreath in a wide assortment of pastel colors that really make this stand out.  Finished just in time for Easter I'll bet that this really stood out from among her other Easter decorations! 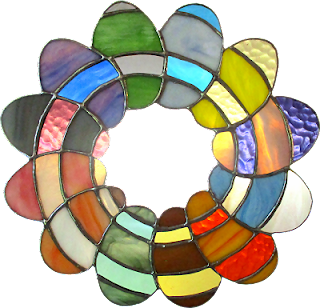 Mary's Heart House Panel can be interpreted in many different ways.  I believe that Mary's message is that although your heart may be heavy there are still ties that bind and love will reign again.  This piece has some very interesting wire work for sure. 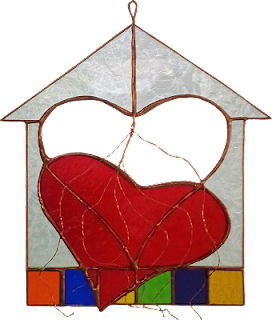 Mary Grace finished the work on her Sunflower in a Hoop design and it's the most vibrant one yet.  Even the brown granite back brown glass appears to light up better than normal in this project.  Perhaps she used a lighter section of the brown glass or maybe it just all came together on it's own.  Either way, this shines. 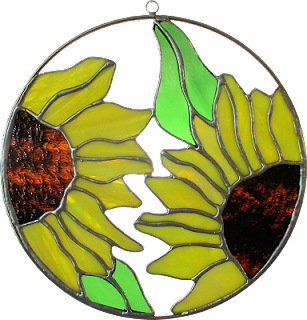 This Heart and Dog Paws Suncatcher was also completed by Jeannette while in class and the colors of the paws (one black and one brown) represent the two dogs whose owner will receive this beautiful suncatcher. 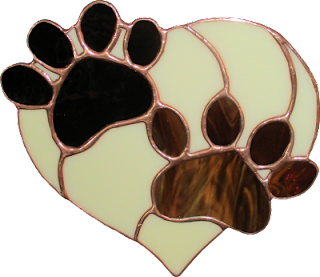 Annette made another faux 3D Cross Suncatcher, along with a true 3D hanging Butterfly, as well as a Dragonfly suncatcher made from a seldom used pattern.  She's on fire!  And the thing is, there was even another Dragonfly that I didn't take a picture of. 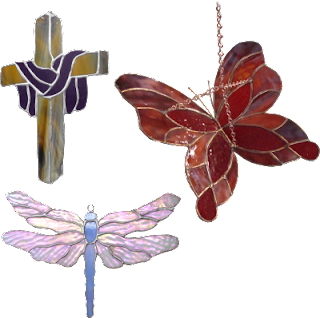 Ann's latest Hand Mirror certainly went together quickly and efficiently.  I think she has these down to a 2 week job which translates to a hand mirror in under 6 hours.   That's great! 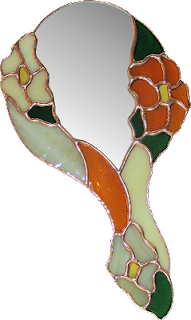 Let's now begin looking at projects which are still under construction starting with Angie's pair of Hummingbirds.  These multi colored beauties are actually made from two similar but different patterns.  The differences will be more apparent when these are completed upon Angie's return.

Jan has begun a Victorian design that she liked but the size of the original pattern was far to big to fit in the space requirements that she had picked for this window.   A little cutting here and there solved the problem while allowing us to maintain the overall design of the window.  We worked hard to include the best parts but sometimes the parts we cut can be brutal.

Lisa began a four piece project where she is replacing all of the clear glass in a four sided Lantern with colored glass featuring some accent cuts.  By the time she left class everything was cut and ground which means that this will be completed before you know it.

With almost all of the Cardinal itself cut out Bee is quickly nearing the end of this eye catching project.   Her color choices are spot on and I do believe this will be a tall, proud feather in her stained glass cap when she completes it.  (Did you see what I did there?) 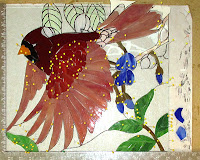 Linda L has begun work on the Panel Lamp she's been wanting to make for a while now.   This will consist of 8 Panels each made flat and then tacked together to form a smooth curving round shade for a lamp base that she already has.  She wanted to go for something simple rather than flashy and I think she ended up designing a very elegant design that will look wonderful when it's finished. 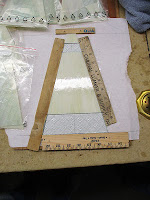 Susan D's Winter Panel is moving right along and will be finished in PLENTY of time for her to decorate with it.  She told me that this was sort of a test piece to see how it would fit in the frame that she has picked out to house differently themed panels for the seasons and all I can say is that she sure picked a complicated project to test out her theory! 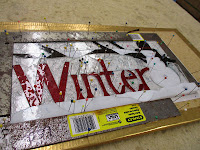 Jeannette also worked on a new Fleur De Lis window which incorporates Mardi Gras colors along with an unassuming Mardi Gras Mask in the center of the Fleur de Lis.  It's a gorgeous pattern and her colors, well, they're spot on as always! 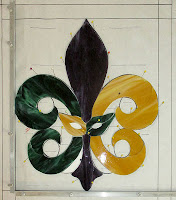 Sheri has her two Sunflowers ground, wrapped and ready to be tacked together and she also has the Hoop that they will both reside in soldered as well.  The trick here is to coat the hoop evenly with solder without missing any areas .  It sounds easy but it can be tricky since the lead is silver and the hoop is silver as well.  You have to pay attention very closely or when you color your finished piece you will find silver areas showing through which are hard to fix at that late stage in the game.

Yep, I mistakenly called Cindy's Pelican a Heron last week!  I do know the difference but sometimes I have senior moments that I just can't seem to shake.  At any rate, Cindy got her background glass cut for her Pelican Window and then got everything ground before she called it a night.   I have a sneaking suspicion that this will get a border on it and an eye cut into place when Cindy returns for her next class.

With his Unicorn all ground and wrapped, Kerry is ready to tack this together and then get a border attached.   One of the pieces of mane was cut a bit short so we've left an opening there so Kerry can cut it by placing a piece of glass under his project.  This always gives us a perfect fit and is the best way to handle a situation like this.  Also, now that everything is wrapped Kerry will cut the horn into 3 or four pieces to give it the twisted look that all Unicorns sport.

With her Mr. Bingle Window nearly wrapped, Cheryl is just about ready to tack everything together and then work on her borders.  Before any of that happens we'll be running some strong-line throughout this window since it's so big and the pieces are large.  Below is a closeup of Mr. Bingle's face which was created by fusing the eyes, nose and mouth onto a piece of white glass so that the face won't be marred by lead lines. 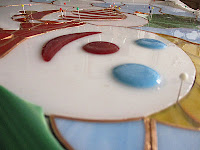 Martha's back and she's been busy working on her own Pelican window.   With her water all cut out all she needs now is a little glass for the sky and clouds and then she can concentrate on a border color.

With just one piece left to go and a little solder needed on the back side I'd say it's safe to assume that Shelley will be finishing her playful Dolphin Panel when she comes back in.  If this isn't a feel good window then I don't know what is. 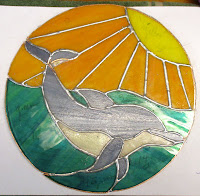 MiMi has begun another Hexagon Window but I didn't get a picture of it before she left.  She was working on getting the first row (the tricky row) ground along the length of her new panel so it sizes correctly and by the time the night was over she got the smaller pieces all fitted into place perfectly.   Here's a look at an older version that she's done just to remind you of what she's creating here. 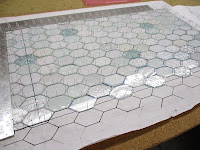 Tracey is shifting gears a bit by making another Butterfly Lawn Ornament albeit from a different pattern than the one she normally uses.  New pattern or not she's flying through this design as you can plainly see in the photo.

Lastly we sort of look at Lara's newest project.  She's decided to make this Four Flower Pot Window and traced out the pattern while in class.   I neglected to get a picture of the pattern but here's a look at the one that Linda F made a few years ago.   Lara still hasn't begun cutting any glass so expect those flower pots to change color when we see what she decides to go with upon her return to class next week.

And there you have it-  An entire blog post of practice making perfect.
Paul
Bayou Salé GlassWorks