Pull Your Lashes Out and Blow Thru Your Nose

I know I promised a tip for setting your running pliers this week but we're holding that off until next week because of Cheryl's Mr Bingle window and the example I can make with it.    Cheryl has worked long and hard on this massive (over 3 foot wide) window and finally her 20 week journey has come to an end.  Mr Bingle looks amazing and even I was surprised at how sturdy he was after he had been completely soldered.  It's amazing what quarter inch foil and a roll of Strong Line can do to help shore up a window.  But it's Mr Bingle's fused face that makes this window shine simply because the face remains intact without numerous breaks throughout it.  That said, as much 'fun' as this has been for her, Cheryl is looking for smaller projects to make after completing this one. 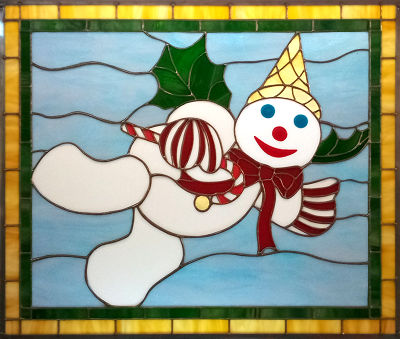 Now to onto our 'tip'.  When Cheryl asked if the Mr Bingle picture she had could be turned into a stained glass pattern I was a little skeptical because of his face.  To get the mouth, nose and eyes into it we'd need a lot of lead lines that would make Mr Bingle look like he had a scarred face which would be very distracting.  But then Russ came up with the idea to fuse the features to the face and was that ever a great idea.   It's the perfect blending of Stained Glass and Hot Glass.  Here's a look at how the face would look if we had actually cut the features into place.  Mr. Bingle isn't nearly as pretty and friendly looking there below now, is he? 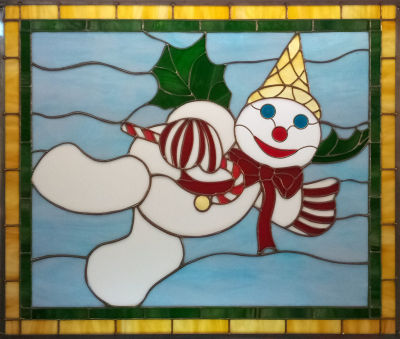 What I'm trying to say in this 'tip' is that you should learn how to think outside of the box. There are restrictions and limitations when working with glass but here at Bayou Salé GlassWorks we do our best to come up with new ideas to work around those 'hard set' limits.  We don't believe in the no win scenario.
And now we go back to out completed projects of the week.  Tell me, have you seen the marvelous Red Fish?  Mary put the finishing touches on hers this week and what a stunning window it turned out to be!  I especially like the fact that the fishing line coming off of the lure cuts through both borders to signify that the line travels much further along to the pole that Sammy is holding.   Mary's glass choices are perfect and her work on all of those thin pieces is exemplary. 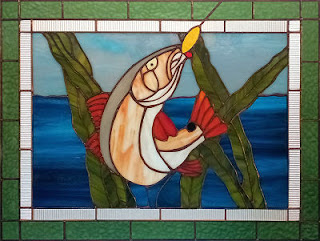 Susan D's Summer Panel is officially behind her and ready to be displayed.   What I love most about this window is that Susan didn't take any shortcuts.  For example, there are the points of her sun which were painstakingly cut and ground into the blue sky, and then there's Susan's wire work for the Multicolored Pail and Flip Flops which just take this Summer Scene to a whole new level. Bravo. 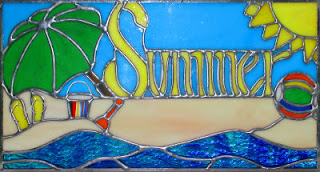 Rowena is a powerhouse stained class craft person.  She can knock out a window of this complexity in just two short weeks.  That border is perfection just as is the rest of the work that makes this window come to life. 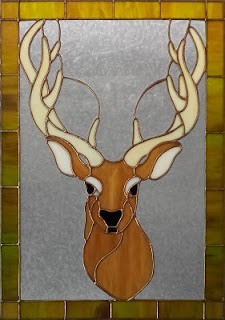 Cindy made quick work of her Franklin Street Light Window and those blues are perfect together.  Someone else asked about this pattern so I think we'll be seeing this done again in a possibly different color scheme very soon.  The problem with Cindy's version of it is that it looks SO very good that everyone wants to make it with the exact same glass which isn't always possible.  Hey, when Cindy nails it, she really nails it! 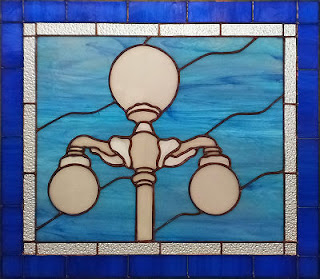 The last of our completed projects is this stunning Oversized Flower Hoop Project  that Linda F finished.  The reason this gets the 'hoop treatment' is because of those leaves on the bottom right of the flower.  They add balance to the piece but they are so precariously attached that they would just fall off if they weren't also soldered onto the hoop.  There are rules to hoop projects and we'll discuss them as a tip soon.   Rest assured that Linda made this one perfectly. 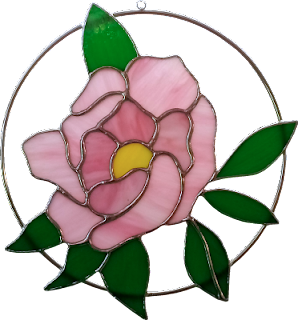 With Summer under her belt Susan D's latest Seasonal Panel is well under construction already.  This is the one that looks like an Adult Coloring Book ('Adult' due to the complexity, not nudity!!!).  You can already see all of the detail that is featured in this window which only spans 15 inches wide.  This window is going to be turning heads for sure and it might make Susan's head spin while she's making it!

Cindy has started a Wedding Box and it's her own design!  This is a rush order so she's planning on having this soldered when she comes back into class.   That means that she'll just have to add the borders to the box top and then assemble the 5 pieces of glass that make up the box bottom when she comes back in. 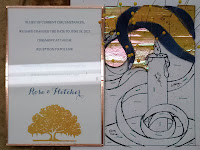 Linda F has begun work on her first of two Ladybug Windows by cutting out the blue sky which will become this window's background.   The spots of the Ladybug will actually be painted onto whichever red glass that she uses and that will happen AFTER this is 100% finished.  We're thinking outside the box with this design.

Kate's Dragonfly is officially ground and yes, I like the orange body she's using for the body best.  The green just got lost whereas the red body just looked dark.   Kate wants to foil her pieces while in class so she can be sure she's doing it correctly which means that there's a good chance that this will be tacked when we see it again. 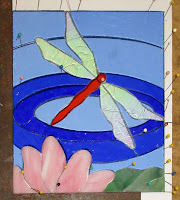 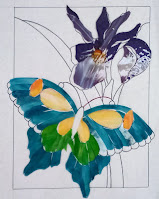 Martha has not one but two more Wedding Boxes in the works.  The second one won't include an actual invitation and will more or less be a Sunflower Heart Box.  The first one will include the actual invitation and you can see how the pattern matches the floral design of it.  We'll see glass cut for this when Martha returns.

Judy M's large Angel Suncatcher was completely wrapped this week and then Judy set upon soldering it.   She's got the front side covered in lead and with only the back side left to go I'm guessing that Tuesday will be a busy night since we have so much being completed, including this Angel. 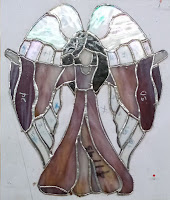 Kerry's Butterfly Window has literally come together this week as he managed to wrap everything, tack it and get his beveled border attached.  He also exchanged the orange glass he had originally cut his sun out of for yellow glass and it really brightened this up considerably.   The end is near. 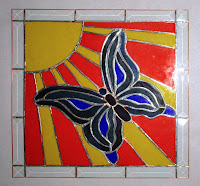 With her Bee Garden Gnome soldered on his front side and the flower at the end of his cap in place, Susan R only needs to work on the back side of this to finish it all off.   I have no doubt that she'll have this completed upon her return.

Barbara worked on two projects this week, her Mini Yellow Iris Window and her simple Starburst Suncatcher.   I say 'simple' but all of those straight lines need to be perfect or the Starburst will look crooked as well as hang crookedly.  Now that it's all cut and ground I have to say that it looks as though this will be perfect.

Linda L's Plate Flowers are also looking great.   She has all but a handful of pieces wrapped which means that she'll tack this together and hopefully get two borders attached to this upon her return.  She has her colors for those borders picked out already so there will be no time wasted when she comes back in to work on them.

Lara loves double borders and so do I.  This week we see that she's picked a lime green border for her thinner accent color and then gone back to Seedy glass for the larger outer border.   Lara was on a deadline for getting this window finished and it looks like she'll certainly have done in plenty of time.

Tracey ended up calling it a night just before she was able to finish wrapping all of the pieces on her Humming Bird Window.  Now that the pieces are surrounded with copper foil you can really see all the detail in this window.    I know one of these are in my future. 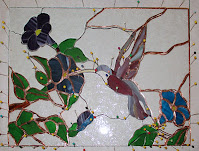 With all of the glass cut out and tacked together for her Flamingo Window Shelly was able to begin the soldering process.  She has the front side essentially finished and she's taken this home so she can hopefully get the rest of the soldering completed before she comes into class.  I suspect that we'll see Shelley working on a new project when she returns.

Sheri got a lot accomplished as she now has everything wrapped and tacked for her Chakra Yoga Window.   With the holes ground into place you can see how the Jewels will look since I placed then into their proper places for the picture.  Well, all but the top one which I just noticed has slipped out of position.  Foiled again! 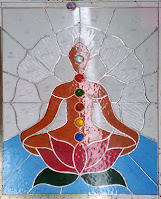 Mary Grace has her two latest Hoop Projects just about ready to be soldered.  I'm certain that at least one of these will be finished when she returns.  Perhaps even both of them will be completed.  Time will tell.

Bee finished grinding the rest of her dove and then got busy foiling all of those nice, white feathers.   If you click on the image you can easily see how the backing of the foil actually influences the color of the white glass (in the larger image).  I like the effect of the copper on the white but there are times when I want a difference between similar whites within the same window and I will use silver backed foil.   This sounds like it could become a tip in the very near future. 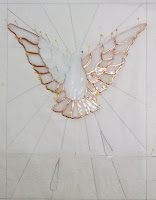 To wrap this all up we look at the five different Crosses that Betty has all cut out.  She even has four of them completely ground already so I'd say she's an expert on making these now! 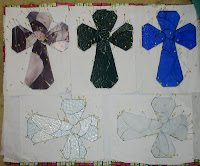 And there you have it.  We're done early again this week and I really like this new habit that I've developed.
Paul