Following the lines on your pattern seems like something you would expect to have to do, but you'd be shocked at how many times people ask me, "So I should follow the lines on the pattern?"  The answer is yes if you want you window to look like the pattern. Errors have a way of build up and multiplying, especially when it comes to anything with a lot of pieces or items that are symmetrical.   In it's simplest form: which stop sign below looks best to you?  You'd be surprised at how little each straight line is off in the second version.  Remember, EVERYTHING COUNTS IN LARGE AMOUNTS. 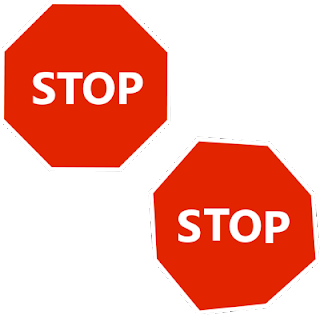 First up we have Cindy's Stack Of Books Suncatcher.   Obviously it's large so that she could get all of those books into one big stack but the real trick to making this window was running a wire which runs completely down the center of the back side of this project.   The wire prevents the suncatcher from folding along any of the numerous straight lines and since it was applied to the window BEFORE Cindy soldered the back side you can barely see it from behind because it's covered in lead and looks like a normal lead line. 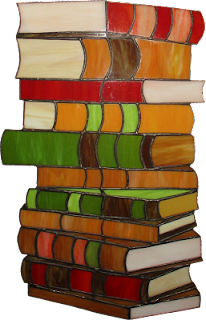 Next we have Barbara's Cardinal Panel.   This went quickly for her and the end result is stunning.  Normally I'm not a fan of clear borders next to clear background glass but the differences in the textures Barbara's used here makes her choice perfect. 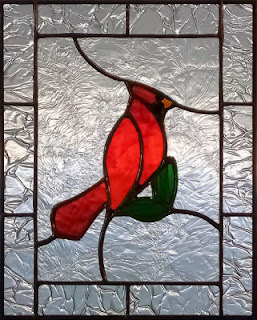 This is Lisa's second Etched Bevel Panel and it's turned out every bit as good as her first one.  In fact, the only real difference between the two is that the background on her first one was pink fractures and streamers while this one is blue. 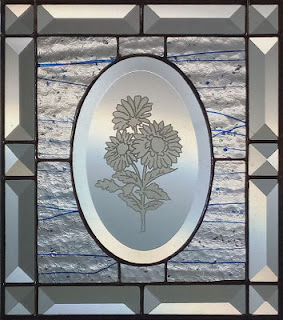 Lisa also made this Dragon Suncatcher as a Wedding gift for a Dungeons and Dragons themed wedding.  She drew the pattern herself and the end result is a ferocious.  Here's to a fiery honeymoon! (I did NOT just type that!) 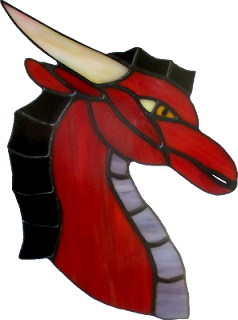 Linda F made a Butterfly Lawn Ornament but she decided to use a lesser made pattern.  I love it!  Although I love the old one as well, I feel as though this is a breath of fresh air amongst butterflies.  And it goes without saying that Linda is the wind beneath this Butterfly's wings. 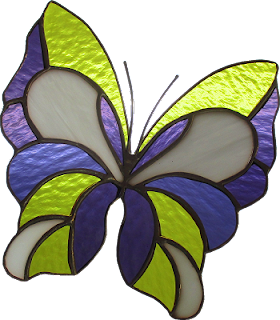 Betty certainly kept busy this week as she knocked out her own version of the Bee Hive Suncatcher.  Very beelightful indeed! 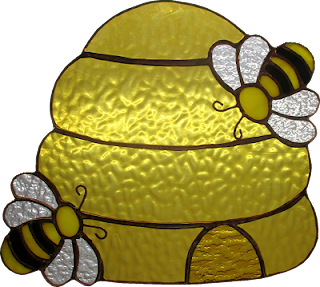 And Betty also managed to get two more clear textured crosses finished as well.  Betty works on multiple (3 or 4) projects utilizing her time wisely between what she does at home and what she accomplishes in class.  That's why you always see her getting so many projects completed. Also, we don't call her 'Two-fer Betty' for nothing! 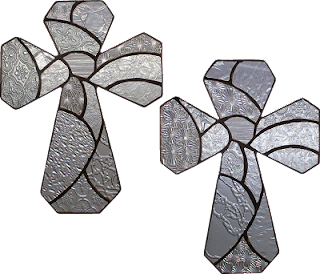 Shawn has her first Christmas Ornament Suncatcher completed and will be starting another when she comes back in.  You just can't lose with a read and green Christmas Ornament, can you?  Something tells me that these are going to be the rage in classes this Holiday season!

Never make a statement without having the proof to back it up.   Here are five more Christmas Ornament Suncatchers that are currently under construction by Ann.  She's already got four of them ground which leaves her with one left to go before she begins wrapping and finishing these up. 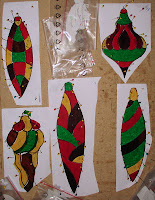 Susan R made it back to class this week and her Woman In A Tub not only got tacked together-- it also got its first border cut and attached.   Wait, I count 2 borders, don't you?   Well the final border has been cut and skimmed which means that this will be ready to be wrapped and soldered when Susan returns. 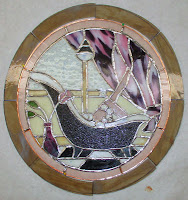 Tracey's Circular Magnolia Window looks stupendous right now even though it only has its first side soldered.   Since she got one side essentially completed in one night I'm think that when she comes back in she'll flip this and then finish up the back side so she can take it along home with her. 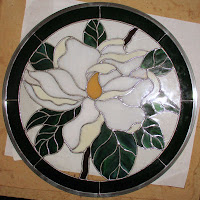 Judy M began work on a Louisiana Hot Sauce Window.  The original pattern had a bowl of crackers sitting on the table but Judy wanted an oyster so we 'borrowed' the oyster from another pattern, printed it out to the size we needed and then taped it onto the pattern in the lower left section.  With her red bricks cut out already I'd say Judy is getting this done one brick at a time.

Here we look at the first of two Mary and Baby Jesus Suncatchers that are being done this week.  This one was all cut out when Annette left last week and now it's all ground as well.  She's already begun wrapping her pieces  so this may have solder on it when we see it again.

And here's the same pattern as realized by Mary.  Yep, Mary is making a Mary Suncatcher.  Her colors are slightly different since she wanted a more 'amber' hue throughout her Virgin Mary and I think that she accomplished that wonderfully.

And now that Sheri's Moon and Stars Panel is all wrapped and waiting to be tacked together you can fully see what the man in the moon truly looks like.  She has each of her stars positioned and ground into place but there was a small break in the top piece of blue sky which Sheri thinks is throwing the balance off so she's going to wait until more blue glass comes in to fix it rather than cut a smaller piece to cover the break. 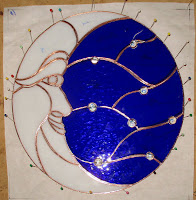 Bee's Flower Pot Window is so very close to being completely ground.   There are only a few pieces left to go in the top center section of this and then Bee will be able to wrap this large window.  It's looking great already but once she gets her pieces wrapped in copper foil you'll easily see where the lead will flow which will reveal all of the detail in this design.

Kerry soldered his squares together and then added a thin border to his Chess Board.  Before the night ended we figured out a good angle for the base of the board which will actually raise it up from the table thus creating a 3D effect.  All of these base pieces have been cut and ground so this will surely be finished upon Kerry's return. 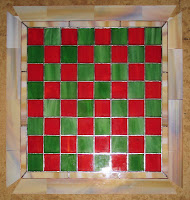 Martha believes that she may very well hate letters.   That's understandable because they are always the cause of grief in windows.  Still, Martha, is soldiering on and with each passing week she's building a perfect window. 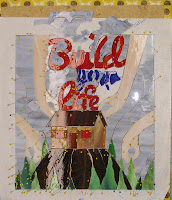 Lastly we look at Cheryl's Scales Of Justice Window.  It's all been tacked together and she's made the two pans solid lead by covering the entire piece of glass with foil and then applying a think layer of solder over it.  She's also got her first border cut out so it was certainly a productive night for Cheryl. 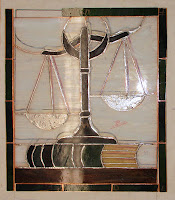 And there you have it,  See you all again next week!