If something bothers you about a pattern, fix it.  Over the 40+ years I've been doing stained glass I've seen countless patterns both good and bad but more than anything else I've seen great ideas that were handled poorly (in my opinion).  Long ago I began 'tweaking' little things about patterns I'd make (even though I had no artistic skills) and over those 40 years I've become competent when it comes to pattern drawing.   Even if you feel you don't have the skills I can guarantee that you can make simple adjustments.

Below is a pattern that one of our students sent to me asking if I could resize it to fit within a certain set of measurements. The adjustment was fairly simple-- I only needed to stretch it a few inches wider than the original but the cardinal itself just looked incredibly off to me especially around the face, legs, and 'branch' areas.   The lead lines were also very distracting with most of them being completely unnecessary so I looked for different cardinals online and found a free Spectrum pattern that I thought looked much, much better.

After drawing out the borders to the size needed we simply scanned the free cardinal pattern into the computer and then printed it out to the width we needed.  We positioned it inside of the empty borders and then drew lead lines running outward towards the borders ONLY where they were necessary.  We also changed the branch that the bird was standing on from a lead line to a thin brown piece of glass.  We did the same for the birds legs but in all honesty the free spectrum pattern did that for us.  The difference is night and day.  The original is on the left and our modified pattern is on the right.  Which looks cleaner and more recognizable to you?

So them first up we have Mary's Dueling Hummingbirds and just as I thought, they are beautiful.   What amazed me most about this was that Mary said she was going to do an easy window.  then she showed me this pattern.  Easy is not a word I would use to describe it!   There are  a lot of tiny pieces in it but in the end all of those small pieces are what make this project look so good.  Her use of mixed colors throughout the birds helps as well!  Gorgeous. 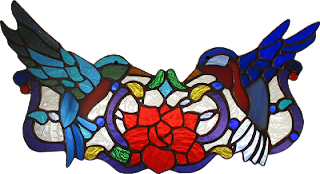 Okay, so I've been talking a lot about Christmas but Halloween is going to arrive even quicker than Christmas!  We aren't seeing much done in terms of Halloween projects but maybe it's because Kerry's Red Haired Witch just looks so darned great!  I thought witches were supposed to be ugly but then again, this IS only her back side. 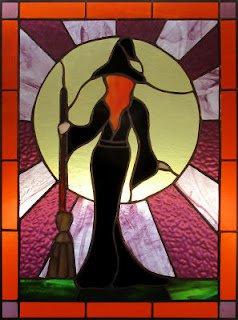 Judy's Cardinal Window again in a slightly larger view.   The end result is stunning and her elaborate border draws your eye to the entire window rather than just the border itself.  That can be a difficult balance but Judy surely pulled it off nicely. 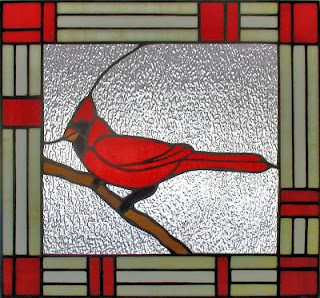 Cheryl finished her Wedding Box just as I expected.   Once the top lid section is completed the box itself is only 5 pieces of glass cut out on a strip cutter.  It can't get any easier than that.   The amazing thing is just how elegant the finished product looks, don't you agree? 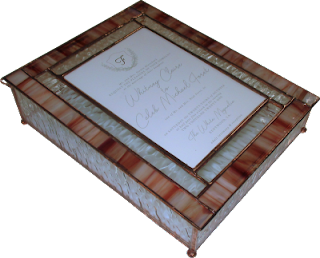 Sheri's latest is a Humming Bird Suncatcher.  Sheri has come a long way and works quickly and efficiently while at home.

And a one, and a two!  Here are Susan D's latest Christmas Ornament-  these having been made with colored glass rather than as solid lead.  I have to say that it's a good look either way these are made. 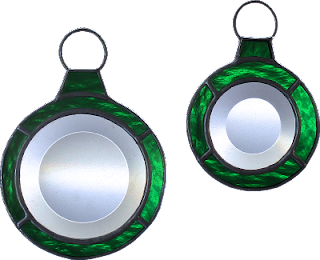 Ann started tracing and cutting two Christmas Ornaments and already has one cut and ground while the other only has four more pieces left to cut out.  Christmas may be coming quickly but so are Ann's Ornaments.

Barbara got her Cardinal Panel ground and wrapped and then proceeded to tack it together.  Once that was done she realized that she still had time to get her border cut.  This could possibly be completed when we next see it. 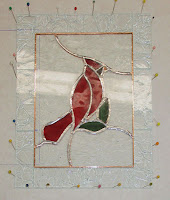 Lara's working on a beautiful multi colored Sunburst design and colors are surely not getting in her way. This just has such an abundance of color that you can't help but love it.  This is going to rock.

White on white-- it's my bane as a stained glass photographer. Below you see Sheri's newest creation but what you can't see is the essentially white moon face while it's resting on top of the white pattern paper.  More will be revealed, especially after this is wrapped, in the weeks to come. 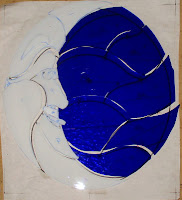 Cindy's stack of books is about halfway cut and ground and her use of color is also off the charts in a great way.  There will be nothing boring about this LARGE suncatcher when it's completed. 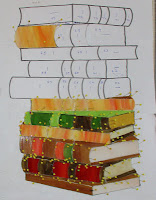 Bee came back this week and her five Flowerpots Window is almost completely ground now.  With just the center flowers left to go I think Bee will be wrapping this before you know it.  Once it's all round you'll love these blooms!

Here's something I haven't seen made in class since I was teaching in Pennsylvania 21(!) years ago.  This will be a 3D Chess Board when Kerry completes it but it can also double as a Checker board as well.  For this to go together neatly and evenly a strip cutter was used to cut 32 red 2 x 2 squares and then 32 green squares in the same size.  The cutting went so quickly that Kerry now has 64 squares all ground and wrapped. 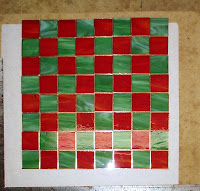 Tracey managed to finished wrapping her Magnolia Window and after it was tacked together she got a green border cut out as well.  It won't take long to grind these to fit and then, after wrapping them, Tracey will begin putting a finished solder bead on this project. 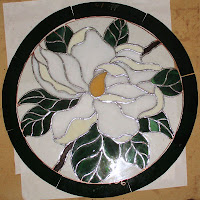 Martha's window is all cut out now and she's just grinding her letters so we can see what it all says.  'Tiald Lore' is what it looks like to me right now but when it's finished I guarantee that it will clearly say, "Build Your Life".   All things in time.  Oh, and Martha will attest to the fact that text in stained glass IS a beach! 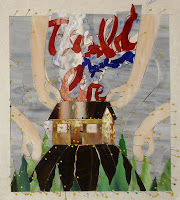 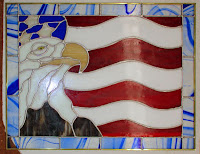 Melissa filled in the missing pieces of her Butterfly Window and the butterfly's Antennae are a work of beauty.  It's all too easy to not get the pieces properly aligned and end up with a disjointed antenna but not when Melissa is doing the work.  She also got her first border cut and ground which means that she only has one more border to go before she begins soldering this. 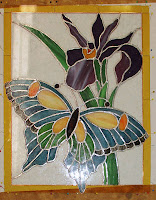 Here's MiMi's latest Cabinet Door Insert.  If you look closely you can see that there are only 3 complete columns of Hexagons in this latest version.  This is down from upwards of nine columns in some of her previous windows.   I'm thinking that this will be finished before you know it.  In fact, I'd call this the Home Stretch now. 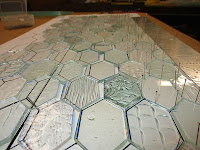 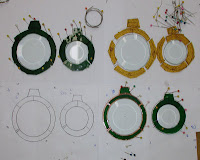 Posted by Bayou Salé GlassWorks at 11:00 AM