When making a suncatcher (or any project that won't get a channel around its outside edge) it is extremely important that you be sure to start and stop your foil where another piece of glass will butt up against it.   The reasoning behind this is to prevent the heat from the soldering iron from loosening the adhesive that secures the foil to the glass.  Should it heat up too much the foil will come free as shown in the picture below.  The only way to fix the issue is to re-foil the piece completely-- a patch won't do because a patch will always leave TWO ends starting and stopping on an outside edge.   In the example below I demonstrated on just a single piece of glass.  If you are making a suncatcher or a window then you'd have to break the piece loose from the project to wrap it correctly.  That's a LOT of extra work. Just pay attention when you are foiling and this problem will never happen to you. 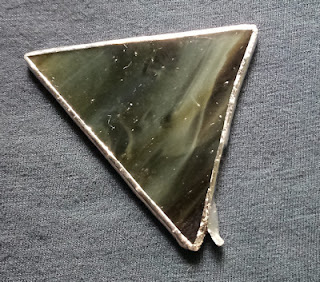 Well look at this!  What makes Martha's Yellow Rose so extraordinary is the fact that it's surrounded by nothing but clear textures and bevels.   That places the viewer's eye purely on the flower.  You can clearly see the unbroken flow of the baroque background glass behind the rose which was carefully separated from one sheet of glass cut to the size of the background.  The fact that the texture has been preserved throughout window reveals Martha's skills. 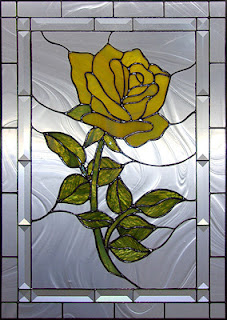 Jan's Olde Fashion Santa pattern was actually based on an old Christmas card.  The look is unique and creating this window taught Jan the stained glass technique of overlaying previously cut and ground pieces on top of a larger background piece and then separating it for perfect, quick fits. 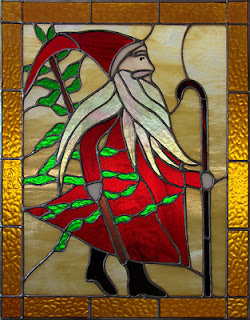 Our latest Easter Bunny was made by Sheri who applied the wire work and the eye herself.   Some of our students worry way too much about those two processes (wire and painting) but as you can see below Sheri did a top notch job doing both.  Of course the stained glass part is nothing to sneeze at either! 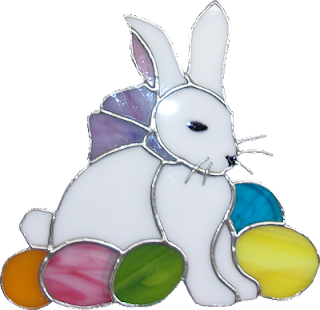 Ann finished her large Modern Cross but she left before I could get a finished picture of it.  What you see below is the same Cross Pattern done is assorted clear textures which  is similar to what Ann made.   The big difference is that Ann used the same textured glass throughout her Cross. 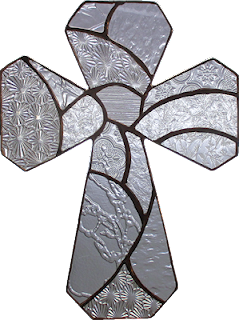 Next up we begin our tour of projects that are still under construction starting with Susan R's Girl in a Swing.   This will be set into a hoop and from the looks of things this girl will be swinging away in full form when we see her again next week.

Martha has also begun a Louisiana Iris Panel and although she loves the glass that she's using for the flower, the glass doesn't love her.  It's proving to be a bit difficult to cut but because of her patience and perseverance she's almost finished using that tricky glass. 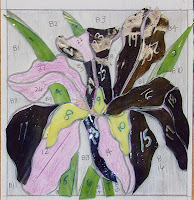 Mary's  begun work on a Humming Bird and Flower Panel.   In just one class she's gotten the majority of it cut out  so I'm thinking that this will be headed to the grinder when she comes back.   This panel is the  perfect size and design for placing the subjects (the bird and flower) on top of a piece of background glass and then separating it for a quick easy fit. 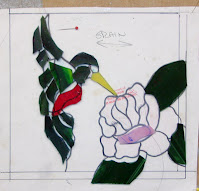 Lara is making what I've dubbed the 'Wrought Iron Cross'.   I've seen outlines of this design done as metal wall art and it also strikes me as something that could easily be done in wrought iron.   Alas, Lara has also unwittingly picked a glass that's beautiful but very difficult to cut.  By the end of the night all was cut however some pieces will need a little more grinding and shaping than others.  I guess this goes to show that beauty can have a price...

As I said last week, Robert's second transom window wouldn't take long at all.  This week he got everything but his channel attached and then I did that for him just to be sure that he gets this completed in time for Easter.   With only the soldering left to go I know that he'll finish this and not have to worry about racing the clock.

At the other end of the Cross spectrum we have a Cross made out of a large assortment of colors.  Sheri's multi-colored Cross/Heart reminds me of something that you might find in an old, small, out of the way church.  Made with mostly scraps these crosses are loaded with charm and sentiment!

June finished cutting all of the pieces for her Rooster Suncatcher and even though it isn't ground you can clearly see just how good this is going to look when it's completed.   This piece is all about color and I don't think the colors could have been chosen better than this. 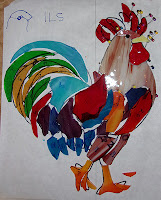 Barbara is branching out of her comfort zone by making a medium sized Panel lamp.   A Panel lamp is rounded by making (in this instance) eight flat 'panels'  each which are soldered and finished as eight separate panels.  These are then angled together to form a lamp that 'curves'.   It may sound confusing but you'll see the process work itself together in the weeks to come.   Today Barbara cut out eight purple flowers, one for each 'side' of her lamp. 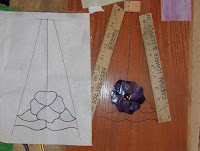 Kerry's worked on grinding his Shrimp De Lis Window and even finished that part of the building process.  That means that he'll be wrapping all of these pieces in foil when he comes back in.   This pattern features some wire work but I'm sure Kerry will have no problem with that.  The best part about the wires in this pattern is that they really don't have to be exactly placed.   This is one of those rare instances where close is good enough which makes this a great introduction to the art of wire working! 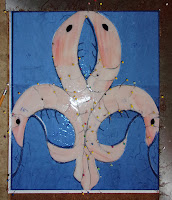 Cindy's Coffee Themed Address Transom is huge , but best of all it's almost completed.   This week she got two borders attached and both sides all soldered (the front was basically soldered since she did that last week).  All Cindy needs to do is wash and color this so she can take it home!

Steve has two more panels cut (one of them ground) for his four sided  Lantern.  He's getting VERY good at this as he was able to cut out an entire panel without using any pattern pieces.  Yep, Steve was winging it as he went along!

Susan D was busy wrapping all of the pumpkins, birds, leaves letters and scarecrows that make up her Fall Panel.  As she picks up each piece she had to make a decision as to whether she wanted to use 7/32 foil on it or the smaller 3/16.  There's no right or wrong here and yes, you are certainly allowed to mix and match foil sizes throughout a window.  It's all based on the size of the piece and the thickness of the glass you are wrapping.

Let has her version of the Owl Suncatcher all cut and ground.  For somebody who's new at this stained glass thing she certainly is working like an old pro at it! 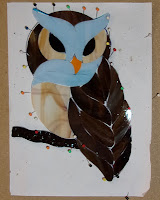 And here's MiMi's latest.  It's all assembled and she managed to get two complete columns ground.  She'll be foiling before you know it!  3..2..1. 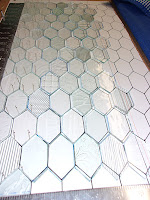 With solder on the front side of her LSU Plaque I'd say that it's safe to assume that Linda F will have this completed upon her return.   Aside from solder on the back side there are only six small pieces of brass channel to add which can be soldered into place in about 3 minutes.

Cheryl has the second of her four panels that make up the sides of her Birdhouse ground and wrapped.  That means that Cheryl will be tacking it together and then starting on the larger front and back panels of her 3D project.   The remaining panels will be much taller than these two so they're going to be constructed in a different jig which we'll see next week. 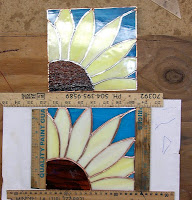 Judy's second Arms Opened Angel is all cut and ground so she was able to begin foiling all of her pieces.   With a little luck she'll be able to finish this when she comes back.  I love the color that Judy picked for the robe.  It's actually two different pieces of green glass but they blend together wonderfully because the differences are subtle rather than striking. 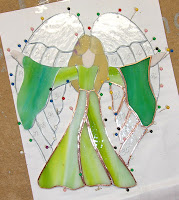 And in the end we look at Betty's latest slew of suncatchers.   Always busy cutting glass, Betty has two more Dragonfly Spoons and two Circular Tulip Suncatchers in various stages of completion.  Some are tacked together, some still need foil but I have no doubt that all four will be finished within a blink of an eye! 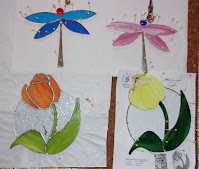 So there you have it.  There's only one more set of classes before Easter hits so the race is on.  I'm pretty sure we'll see one more Rabbit get completed but who knows what else will walk in the door!
Paul
Bayou Salé GlassWorks