This is a special edition to highlight the sheer determination of MiMi's hard work that all of our students have been following for months on end now.  Way back in October of 2020 MiMi began the biggest endeavor that I've ever seen a student tackle:  Fourteen windows build entirely of perfectly cut and aligned Hexagons (or Hexalongs if you would have it). These hexagons were cut out of 18  different clear textures. 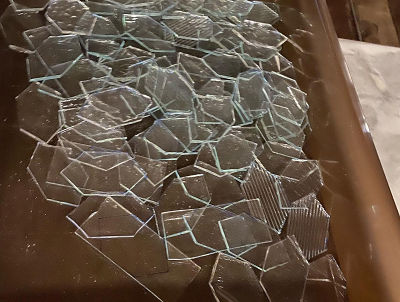 How many hexagons did she cut out?  Try 4000!  MiMi guestimated that number and amazingly enough only had 40 extra when she finished the last window.  Here's a look at just a few of those hexagons all cut out and waiting to be ground.  Yes, not only did MiMi have to worry about cutting perfectly straight lines, she also had to grind those lines uniformly as well! 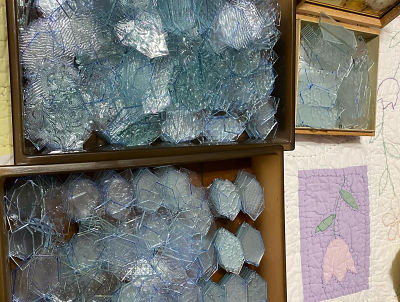 Here's a closeup of one of her first completed windows.   Look as hard as you like, there's not one imperfection to be found.  Part of the challenge was soldering these assorted textures because some of the glass was thinner than average and some of it was thicker resulting in an uneven solder line.   But once you get the hang of soldering those different heights the solder hides the fact that the glass isn't all on the level. 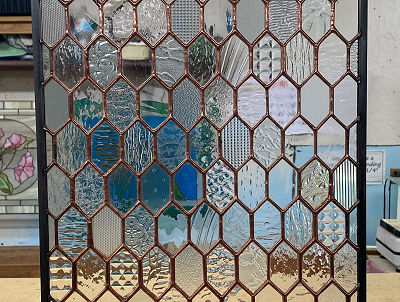 MiMi used a technique known as 'uniform randomness' when assembling her windows.   For the most part the different textures were placed randomly but before anything was tacked together she replaced any pieces that matched and butted up against one another.  Here are two windows mounted into their respective doors. 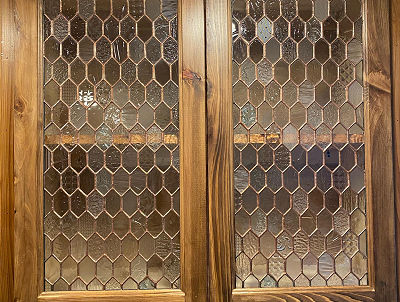 Here are her first ten inserts finishing off the look she wanted for her bar.  Yes, it's right outside her bedroom.  How convenient! 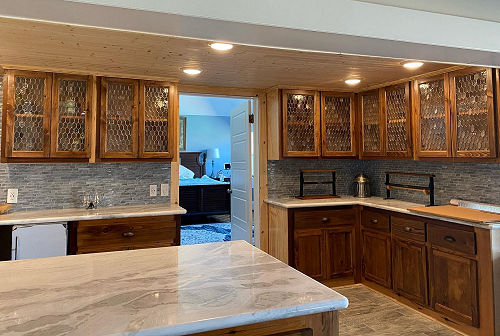 And here's her 'Entertainment Center' with matching glass doors on either side of the fireplace.  Sadly I have to say that what you are looking at is a TV and not an actual Van Gogh. 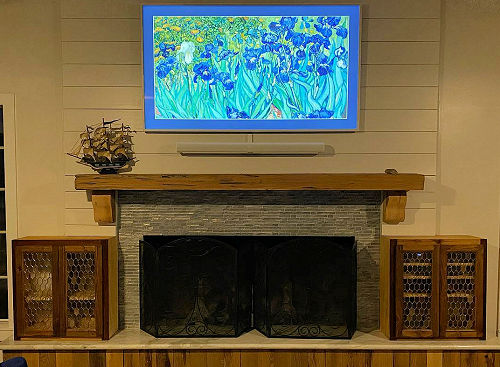 How long did this all take?  Well, as I stated earlier she started this massive undertaking in October of 2020 and she completed the final insert just last week.  That's a 21 month labor of love!!!!  During that time she never wavered even when I suggested that she take a break and work on something different for a week or two.  And that's exactly why MiMi deserves this special post.  She's proven that if you just keep working at a seemingly impossible task it WILL get done!  Bravo!