They're All Out Of State

Betty's Pendant Fleur De Lis Window looks stunning with it's Baroque background offset by the two different blues that make up the Fleur De Lis.  I was asked why I call this the Pendant Fleur De Lis so I'll share that answer here with all of you.   The inspiration for the pattern came from a piece of jewelry that I had seen online.  I loved the angled bar that binds the FDL and this pattern was created from that jewelry. 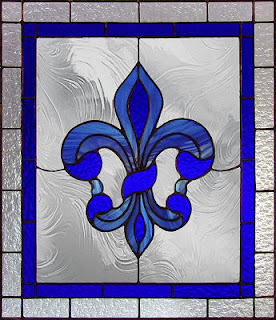 And here's that inspiration. 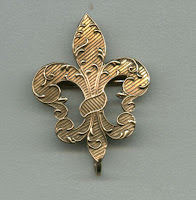 Jan was back in this week and she was able to finish up soldering her Plate Window.  Alas, there was a break in one of the four pieces that actually touches the Plate so we had to spend a little extra time  breaking it out and replacing it.  Still, by the end of the class it was as good as new and ready to hang. 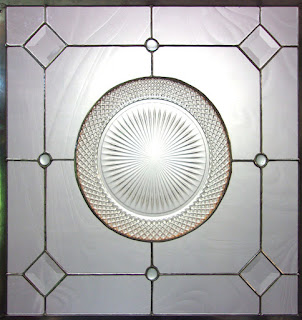 Linda L's final Beach with a Crab Window has been officially completed leaving her with nothing left to do (kidding, just kidding!)  I know that she's happy these are finished because I don't even like making two of the same thing even when it's just a suncatcher.   Something like this with all of those little leaves in the palm trees can easily get overwhelming after the first one. 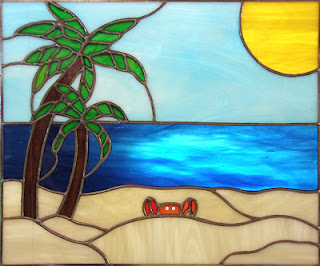 Steve's second Sunflower is hanging up and looking great even if I may have it hanging upside down here.  However, I believe that it's unidirectional and would look great no matter which way you look at it. 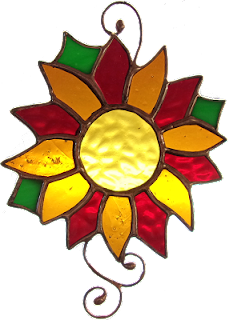 Betty also finished her two Bumble Bee Suncatchers as well as 4 other Dragonfly Spoon Suncatchers.   I only got a picture of 2 of the Dragonflies but I did pick the two prettiest! 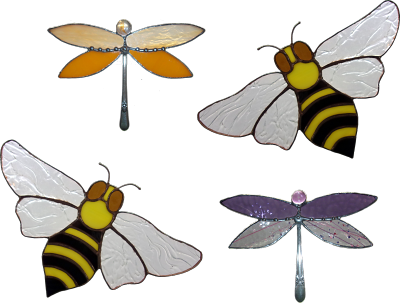 First up in our projects that are still under construction we have Kerry's Circular Magnolia Window.   He's gone all out with this one and is now ready to get a border attached to it since he completed wrapping and tacking his window during his last class.  There's no doubt that he'll be soldering this when he comes back in because the border won't take long at all. 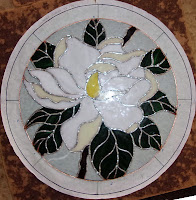 Susan R decided to put a circle bevel in the center of her Geometric Swirl and she did it in the best possible way.   First she fitted together all 12 pieces and then she placed the bevel on top of those pieces, traced around it and then trimmed off the excess glass.   This left her with a perfect fit and a suncatcher that will be finished when she comes back in.  Look at the bottom left of the paper and you can see the single pattern piece that she traced 12 times to make this. 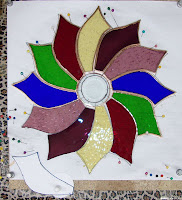 I normally don't cover repairs here in the blog but MiMi is doing a complete disassembly of a window that was most likely made in the 70's or so (judging by the glass).  It was literally falling apart around the border, had numerous broken pieces, and was more than a little cattywampus all throughout.   The top picture shows what the window looked like sans border, and the bottom picture shows it after MiMi got her dirty gloves all over it.   There are only a few pieces left to go before it's completely undone afterwhich she'll start grinding things to fit better than they did the first time around. 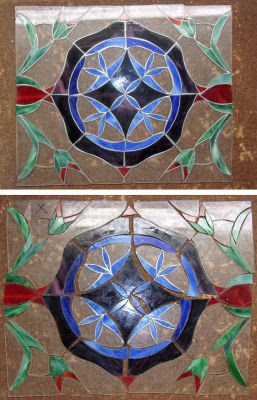 Lisa has two irons in the fire, the first being an Philodendron Leaf and the second being a unique multi-tiered Feather hanging piece.  Each feather will be suspended from what is actually a bike 'sprocket' that she's inlaid with glass!  This is going to be phenomenal!

Next up is Lisa's husband Steve.  He not only completed his Sunflower Suncatcher, he's also hard at work on a wine glass decoration.  To make it he's bent copper wire into the shape of a wine glass that measures approximately 30 inches tall.   The copper framework  was shaped on a wooden jig using screws to ensure that both sides of the 'glass' would be symmetrical.   He then began cutting out circles in various colors to decorate the inside hollow portion of the wine glass.  It's already very near completion so here's what it looks like now.  Steve and Lisa ALWAYS think outside the box when it comes to stained glass. 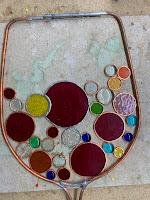 Let put my math skills to the test this week and I'm relieved to say that I  passed the test.  She wanted a bevel border to finish off her Pair of Cardinals Window and she also wanted a tan inner border.   First we figured out a bevel combination that was larger that the Cardinal section of her window and then we cut an inner tan border to make up any difference.    It's hard to see the final border but everything is in place and fits together wonderfully. 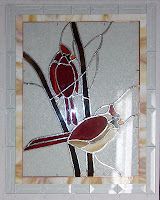 Lara's Peony Window is really coming together nicely as she works on the bottom flower now.  All it takes is a few petals of glass here and there and before you know it you're hanging up your window! I love the light green/teal that she's using for her leaves.   It fits perfectly within the design yet it isn't the color that most people would pick-- probably because most people are boring.  But not Lara!

Ann's Got the circular portion of her 3D Cross Window almost completely soldered already.  She came in, wrapped the few remaining pieces that were left to foil and then began soldering.  The front side has been completed and the back side is a good 80 percent of the way to being finished.  Look closely in the upper right and you can see the new cross design that Ann will be using.  I'm hoping we see this completely assembled when we next return. 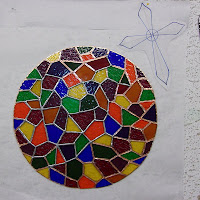 Cheryl's Tree Of Life looks alive again!  With almost all of the sky cut out and ground she only has to fill in a few leaves and then adjust the bottom ground before she has to decide on what she wants to do for a border. 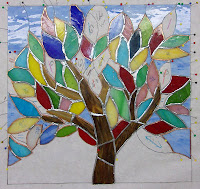 Up next we have the first of our two Cardinal and Sunflowers Windows. This is Mary's and now that it's completely tacked together you can get a good feel for what this will look like when it's completed. Mary went with a blue color scheme for her window. 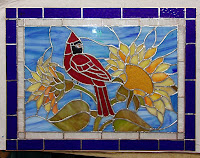 Next up we have Martha's Cardinal and Sunflowers Window.  Martha's sky is a much lighter blue and she's matched her inner border to her sunflowers. The final green border (to me) gives this a very traditional look.  That said, I love them both.

With all of her glass cut out, ground and wrapped, Judy will be able to begin soldering her CUTE (not at all scary) Teddy Bear Window.   There's still one more accent that we have to do to the eyes but that will happen after the window is 100 percent completed. 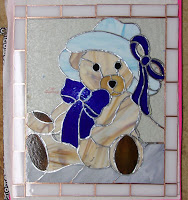 Barbara H's Flower Panel Lamp is so close to being all ground that she can already see the light!   It won't be long before Barbara begins soldering each of her eight panels.  After that's done all she has to do is join them all together and solder eight lines.

Mary Grace has her background all cut out for her second Peacock Window.  She already at work grinding everything and will soon be wrapping all of these pieces.   Once these are ground the hard part will be well behind her because, as you know, borders are a piece of cake.

The answer to last weeks bonus question is eight.  That's how many Birds on a Branch will fit in Susan D's window.   I think what you are looking at below is number seven but I could (and probably will) be wrong about that.  Apparently my mind is shot and I can't recall what we clearly talked about in class!   But I did remember 8! 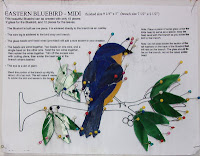 Sheri is taking her time with her Peony Window and working out her color placement on the pattern before she does any cutting.  She has her assorted hues of pink glass picked out but deciding where to place those colors is the tricky part. 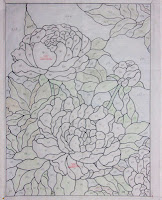