Don't Judge a Book By its Cover

Roxie's Fleur De Lis/UL window is completed! Having soldered this all up during class this week she's already moved along to her next project-- a woman in a claw foot bathtub. It may sound a bit strange but when you see that pattern you'll have to agree that it's going to be very nice. Meanwhile, look at the great job she did on this window.

Anita has just about completed her first real window. This is a big change from the butterfly and Anita is completely into this! She got the final border attached and then soldered about 95% of the first side of her window. There's no doubt in my mind that she'll have this one completed during her next class on Tuesday. 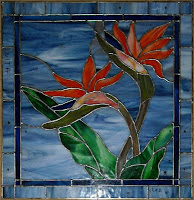 Ceil was going to add her final border to her window but we didn't have enough of the glass that she really liked so she's decided to hold off until the glass comes in. It's always best to wait for what you really want rather than to settle for something you're not completely happy with. But what would she do this week? Well, she also wanted to overlay 1 or 2 frogs on top of her window so that's what she worked on this week. She's got 1 orange frog ready to be soldered and she may make another one before her flower window is completed. 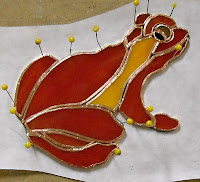 Cheryl's Acadian Woman is all wrapped and waiting for a background. We need to paint some features onto her face because it's far too small to cut them in. Hopefully that will be completed for next week (and I'm seeing no reason why it won't be.) Cheryl is moving along quickly here and will be ready to start something new shortly. 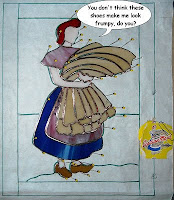 Janice completed her frog window last week and has decided to help Grace finish her window so it can be given as a gift. The thing is, there's a deadline involved so 2 people on 1 window will cut the work load in half and speed up the process. Just about everything is ground so grace will be working on the top half of her final building during her next class while Janice grinds each of the pieces. This French Quarter window looks better and better with each passing class. 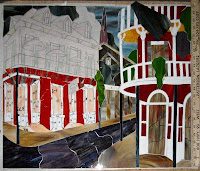 Trecia decided to make a Fleur De Lis window as her first project and to say that she's moving right along is an understatement. She got the 6 piece FDL cut and ground so after she tacked it together she was able to get her background cut out as well. With all the hard work done during her first class she'll be able to rest assured knowing that the rest of this project will be all down hill from here. Trecia really understands how important it is to have smooth curves. It's something that students usually take a few weeks to comprehend but Trecia just got it right from the beginning.

And Paul has his box top completed and his sides are ready to be to be soldered together. I know he was amazed at the transformation this project took when he washed it and then colored the lead. Yes, it was a bit messy at first but EVERY window looks like that until it's cleaned up and has some light behind it. Wait until you see this sitting on top of its clear sides with a mirrored bottom. It's colorful and definitely a success in terms of ideas. 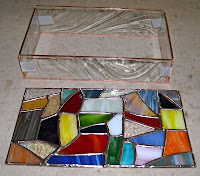 Terry really buckled down this week and spent all her time at the grinder. I barely got a chance to talk to her but at the end of the class she had her window ground perfectly and ready to be wrapped. She'll need to cut a background for this and then just the final border before calling this window completed! Great job!

And Myrt got her Fleur De Lis all cut out including her border. She's going to be soldering this one when she returns and then taking it home to hang up. This is another example of a new student who's catching on to the entire process rather quickly. 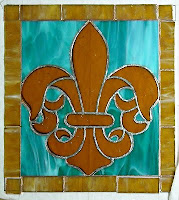 Next week is a holiday week and I know we won't be having classes on Thursday night. Everyone is trying to find a night to reschedule their class since Wednesday night will also be a hectic. I know we'll be seeing a lot of students and I have a feeling that some of them who have never actually met will be doing that during this Thanksgiving Holiday week.

If you don't get to see the next update before the Holiday let me wish you all a Happy Thanksgiving! (And have some pie for me!)

Posted by Bayou Salé GlassWorks at 10:34 AM