With Her Window Out Of Its Sleeve, She Walked Out The Door...

Suzy. Reflecting back I can hear her worrying about being able to complete a project. I can also hear her laughter but most of all I can hear her cries of anguish as we pretend to have broken her finished windows. Fun times. :-) And now she's laving us for a few weeks to take a break until the New Year or somewhere there about. We're still going to party on here at the Studio each and every Thursday but it just won't be the same. This one's for you Suzy. :-) (I don't know why I'm doing all this sucking up for her-- she's told me a few times that she checks out the blog on her phone and can only really see the pictures on its small screen!)

So anyway, this is the window that Suzy left with. It the 2nd Caduceus panel that we've had made here in the shop during classes and it looks great. This is going to be a gift and I can't see how it won't be loved. 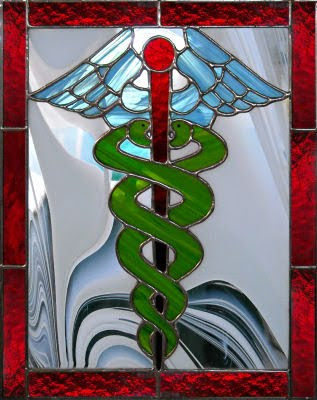 Terry finished soldering her Fleur De Lis window and then had to decide what color to finish off the lead with. She was leaning towards copper since all the glass used in this are shades of amber but the rest of the students interjected and insisted that she finish it off in black. It was a choice that I agreed with as well so Terry took our advice and when it was finished we all agreed that it was, without a doubt, the way to go. It gave the window a nice old feel about it. 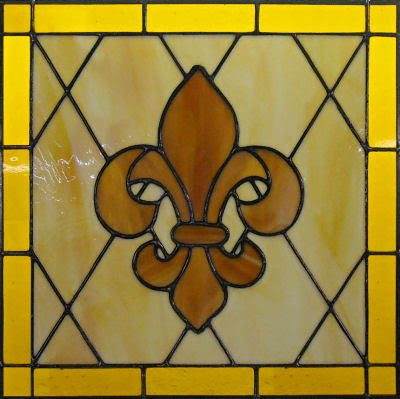 Patty and Roxie both came in and completed the Fairies they had started in their previous class. After making sure that every thing lined up they soldered their wings together and I then attached the to the back of the Pewter bodies to show them how it's done. I've probably made a hundred of these things over the years (I remember doing 21 of them of them at least twice for different shows in the past) and I have never really had a problem with them but on this particular night I was having more than my fair share of problems. Finally, 25 minutes later, they were attached and then they were washed and waxed. I expect these to be a hit. Here's Patty's Fairie Lady: 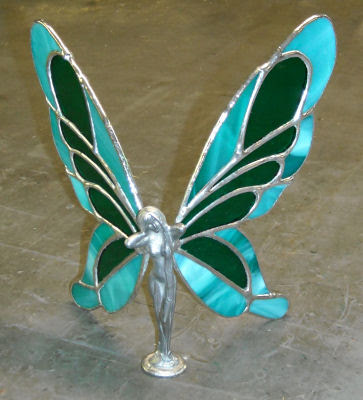 And here's Roxie's. Hopefully all my swearing didn't scare them away from making any more of these. I'm sure that the problem was just a case of my being a bit rusty since I haven't attacked wings in about 8 years or so. 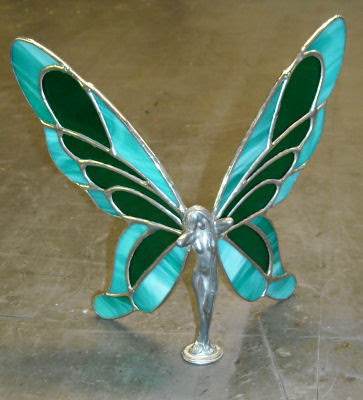 And speaking of Roxie, I have a picture of her UL window that she started a while back. She had taken her pieces home to wrap and tacked them together a few weeks ago but when she started working on the Fairie I forgot that she had 2 projects underway to post. She'll be cutting the background for this during her next class.

Yvette has all of the pieces she has cut out for her peacock all tacked together now. She's going to start cutting the green and blue feathers to complete the rest of the actual peacock during her next class. Look out because this is about to fill in and start to look like it's about finished after next week.

Janice soldered the front side of her Lakyn-Frog window and has the back side about halfway completed. That means that we'll see this one in the light during our next Blog update. I've seen it lit up already and it's nice! 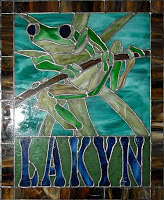 And last but not least we have a look at Grace's window. The pieces that she has cut for her French Quarter window are almost all ground now. There's still the top row of her building on the right and the pieces in the center church portion, but it's a big step forward in getting this completed. There are a lot of thin pieces in this so soldering it will be a bit time consuming since she'll have to bounce all around so as not to break any of the delicate pieces of glass with the heat from the melted solder. But soldering is relaxing so I don't think it will be a big deal to Grace. 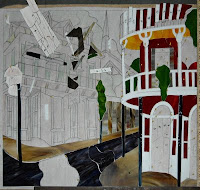 And now it's official-- The Blog is completely up to Date! I still have classes left for this week which includes a butterfly from our newest student, Trecia so look for that update during the weekend.