No Thursday night class this week. Everyone was working extra hours so we missed out on a visit from Roxie, Patty and Suzy. Look out next week though because they'll probably (definitely) be back with a vengeance!

As always we're starting off the blog with a look at a finished window and this week we have another Fleur De Lis by Bonnie. The difference with this one is that it doesn't hang as a square but rather as a diamond with a corner at the highest point. It wasn't a huge difference to make but something that required a few extra lead lines in the background to make it work out. All in all another terrific job by Bonnie. 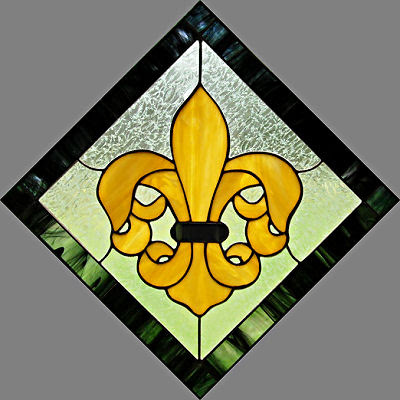 Next we sort of get a look at Anita's window. Alas, I forgot to take a picture of it before she had it disassembled, boxed and headed out the door so she could wrap it at home. So what I've done is adjusted her picture from last week to show you approximately where she stands now. While she was in class she completed cutting all of her glass (except the borders) and she also got everything ground which is why she took it home with her. During her next class she'll tack this together (but it won't be next week because I predict I'll have gotten sick and ended up canceling Wednesday night class). I took some liberties with the colors of her leaves because I honestly don't remember what glass she actually used. My bad, but I'll do better next time around. 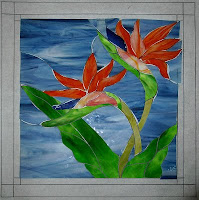 We have the same problem with Ceil's window this week. Her's walked out the door in a box before I could take a picture but I do remember what glass she used so this is a fair representation of what she has completed. She didn't have it completely ground yet but she had more than enough to take home with and wrap so she'd be ahead of the game when she comes back in. 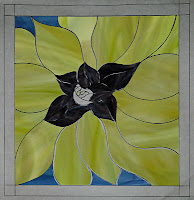 Grace is making great strides with her New Orleans Window. I think we're going to rename this the "French Quarter Window" from hereon out. The top of her building on the right is now complete and the middle church section is taking shape. Next week she'll have a lot of this ground . This is currently the window that all the students have their eyes on here in class and for good reason. 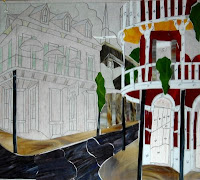 Which brings us to Janice's window that didn't have a border when she came in to class. After much consideration everyone in class agreed that using blue for a border was just a bit too much blue for the window. Had the letters in Lakyn's name been done in a different color a blue border would have picked up the frogs eyes and worked perfectly, but the eye color was already picked up in the name. We tried different greens but nothing stood out until Janice said, "Why not pick up the color of the brown branch?" And that was the combination that everyone agreed worked. This is ready to be soldered next week. 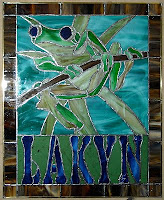 As you can see, Paul has made GREAT headway on his box top. What started out as an assortment of glass now fits together. There are only a few sections left to fill in and then he'll solder this together and make his box sides. Paul's getting close now.

One of the biggest problems with being behind in the Blog updates is the fact that sometimes I sort some of the pictures incorrectly and place them in a folder under the wrong date from when the picture was actually taken. That's what the case was here. Myrt was in on the 14th and began cutting out this Fleur De Lis window. Somehow the picture just turned up here this week so let me fix things by showing you what she accomplished 2 weeks ago. 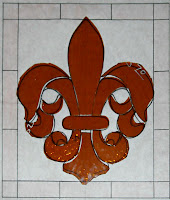 So you can imagine my surprise when I looked at the pictures for this week and saw that I also had a picture of her Fleur De Lis all ground and wrapped! Well that's what she did while she was in class this week. And if all this is confusing to you don't worry-- just know that Myrt has made major progress on her Fleur De Lis Window. :-) 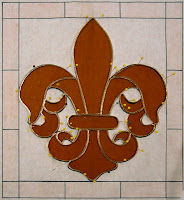 And speaking of Fleur De Lis windows we'll end this with a look at the one that Terry is currently making. The border is cut, ground and not just tacked but soldered as well. There's only a little bit left to go on this which means that this may very well be finished and on display in our next update. (Trust me, it will be.) 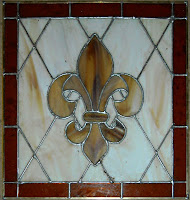 Well this is it. One more posting to go and I'm back up to date save for the classes that are still occurring this week. By this weekend (Nov 13th) we'll be back on schedule and completely up to date. Hopefully this will stop me trying to figure out who made what on any given week. But this also means that I won't be able to 'predict the future' any more and know if a window will be finished with certainty the following week.