Since we took most of Easter week off we only had a handful of students come in. That doesn't mean that nothing was accomplished though as you will soon see.

Since the Oil Scopes are such a big hit Russ and I decided to try something a little different and go for one of the other OilWand kits. This one is called "The Lost Planet" and I have to say that I really like the idea of the LARGE opening used to view the image (as you can see, the camera takes a great picture of the image) but it does require more light than the regular Oil Scope. At any rate, here's what "The Lost World" looks like from the outside.

And these are 2 shots of what you see when you look into the bottom viewfinder. Remember, you only see one of these images at a time but it's constantly 'exploding' which is why I've included 2 different views. 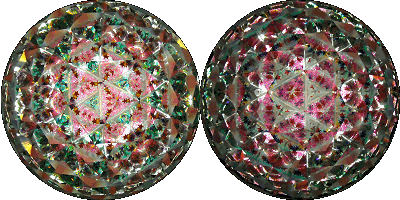 Cindy has cut out most of her Boar Window and has begun grinding it. She's decided to spruce up the background a bit with a lot of green grass which really will add to the look of this window. Here's a shot of some of Cindy's cutting. All those scalloped edges means that the small grinding wheel and Cindy will become good friends!

Terry's made some big progress on her Beveled window. She has almost all of the bevels cut and will begin adding the final border when she returns. I know this is hard to see right now but in just a few more weeks this is going to knock your socks off!

Anita hasn't been sitting around twiddling her thumbs either. Look how far her Egret Window has come along. A lot of this had been ground and there's really only the sky left to cut before she begins tacking this window. And once you start tacking the rest is child's play. 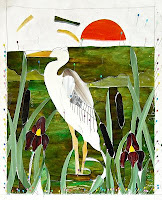 Grace is moving right along with her Aeroscope. She's be finished with this one next week for sure since all she needs to do now is solder her color wheel (the propeller) and then make another out of clear textured glass. This project is going to fly right out the door. 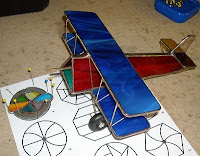 And Janice has finished the last of her flowers for her 3 large windows. She's going to wrap these and then tack them together before adding the green Leaves. Once that's done she'll be cutting background! 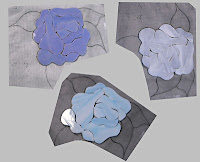 That was what happened during the week before Easter. We had another small class the following week but now things are back into gear and moving right along. Check out a new finished project in our next post. Can you guess which one it will be?