How Wide Are Your Windows?

Patty's latest Cabinet Door inserts take her to the halfway point in this project. She needs a total of 8 windows and these are the third and fourth. As I predicted last week, she completed these in just one class so she'll be off of this project and onto another in no time. 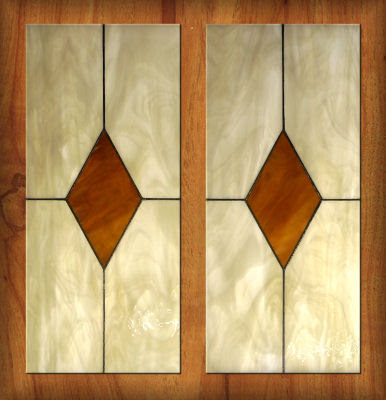 Next we get to see the latest Transom Window made by both Dianne and Peewee. With the two of them working on this window at the same time they made excellent progress. They're going to take the next 2 months off but will be returning sometime around June. I can't wait to see what they plan on making next. Myrt has her eye on this pattern so we'll be seeing this one again soon.

Susan made this Fleur De Lis window but the sun would NOT co-operate with us at all when it came time to take its picture. In order to show the pattern in the background glass and to make the brown border look brown rather than black I had to brighten the image considerably. In doing so the blue FDL in the center got much brighter than it actually is. It's not nearly that neon-esque when you see the window in person. (Did I just invent a word?) 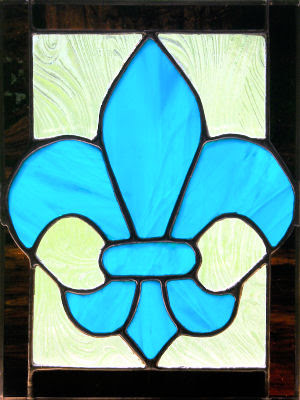 Sonia's Five Women Window is getting a lot of attention and it's not because they're all showing their ASSets. There's just something about this pattern that seems to be catching all the students eyes. And when it's completed and all lit up, well, look out! 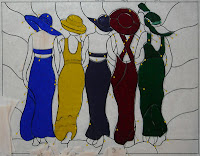 Roxie is grinding away at her Flower Hand Mirrors now that her glass is all cut. Her grinding may be the most precise grinding that I've ever seen a student do. Everything fits together so perfectly that I actually believe the pieces that I grind don't fit nearly as well as Roxie's would! But she's a trooper and always graciously accepts any help I give her during class.

Terry's Egret Window is real close now. Everything is ground save for the flowers in the bottom right corner and I'm sure that they'll be done and this will be wrapped when it returns. She's decided to go with a green border which works just right with the rest of the colors on this window. 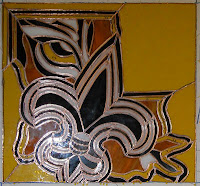 Bonnie's Fleur De Saints Window is almost all cut and ground. She'll be wrapping the letters and their background glass at home so she can get the borders under way when she returns. She's going with a rather unique border using 3 different glasses on a two layer border. The colors will wrap around the inside and outside border which is hard to explain so check back later this week to see exactly what I mean. 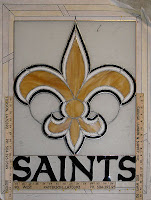 Anita has been busy making borders for her black windows. The solid black glass really gives the Red, Green and Yellow glass an extra pulse of vibrance. This window isn't even lit up and it's already bursting with color! 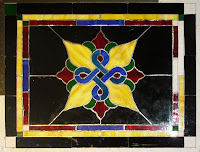 Anita also worked on changing her Fleur De Lis Suncatcher into a Fleur De Lis Window. She melted off the solder around the outside edge of the FDL and then traced it on a piece of background glass. After it was cut she ground it and took it home to wrap. 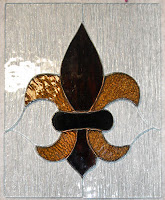 And last but not least we have a look at Pam's 2 Box Tops. She started the Iris Top last week and completed the Geometric design at home. We adjusted her borders and now the Iris top is completed and the other just needs some solder. These angled borders are a LOT of extra work (attaching the borders took most of the class) but they're really nice once it's all together. You'll see just how nice they are when she attaches these tops to the actual Box bottoms next week.

So that's it for the 1st week in March. One more Blog to go and we'll be completely up to date. Expect it RSN (real soon now).