March Storms All Over Classes

Sadly, pouring rain forced us to sideline our Wednesday night classes. In the end it was a good thing that no one showed because although things were calm around 5:00 things took a turn for the worse when the sky opened up again around 8pm flooding the Bayou Salé road. The fact that it's about to be re-paved and that the asphalt has been stripped away made the road feel like a 2 inch tall swimming pool overflowing with water. Staying home on Wednesday night was the smart thing to do. We still have out Tuesday and Thursday classes to talk about though so let's see what just happened on those nights.

Bonnie's Saint's Fleur De Lis Window is now finished and is most likely hanging up at her home. She made this for her husband and wanted to put an interesting border around it without going overboard with an overly fancy three layer border. I think this variation of a double border was a good choice. It's stands out without overshadowing the main subject(s). As you can see, Bonnie took her time making sure everything was ground perfectly and that all her points lined up. In a pattern like this alignment is the most important part of making this look right. 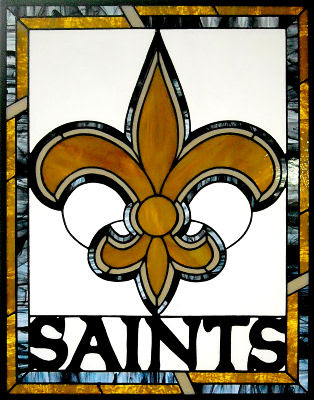 Terry's Rooster Window is a hit! By drawing her own patterns she's get a good inside look at the design process of stained glass windows. Most people think you just draw a picture and that's all there is to it but you have to carefully plan where each line starts and stops or you'll end up with a pattern full of impossible cuts. Beginner patterns are chock full of extra lead lines to make impossible cuts possible but I like to disguise my necessary lead lines by hiding them in other parts of the window. And that's exactly what Terry did with her leaves. They hide all the breaks needed to cut these pieces and also make the window look that much nicer. 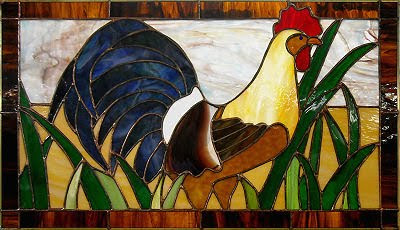 Susan came up with this Garden Decoration idea when she saw it in a store. The store bought version was poorly made and couldn't really handle the stress of staying outdoors in the weather but the one that Susan is making will be just fine. What we have here is a new version of the Shrimp De Lis. Next week Susan will tack it together and add all the wires that will add the finishing touched to this piece. 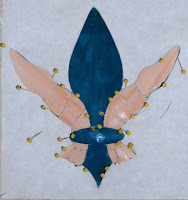 Sonia's Pokeno Girls Window is all set to have its background cut out now that the women are all completed and tacked together. She needed to pick hair and shoe colors this week and since there was no set budget these women tried on every color of shoe and hair style imaginable. :-) But by the end of the night they were all completely accessorized and dressed to the nines. There won't be any delays making color choices next week because before Sonia left she picked out her background glass so that she'll be set to go when she returns. 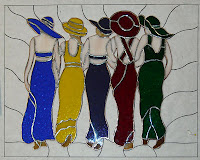 Myrt has more than half of her Traditional Window all ground and ready to foil. She's discovered that one of the pieces was cut backwards but a re-cut will fix that issue quickly when we get the glass next week. I heard more talk about a double border so I'm fairly certain that's what she plans to do. If you have the space available in your window two borders are always better than one.

Roxie's got all of her hand mirrors ground and ready to wrap. She took her pieces with her as homework for the week so she'll be tacking and soldering these next week for certain. We'll cut the mirrors but only tack them into place if we know the mirror will be solder by the end of class because you never want to leave any chemicals or water lying on your mirror for any length of time since that promotes mirror rot. What's mirror rot? It's when chemicals eat away the backing silver on a mirror leaving a black residue. And it ain't pretty!

And lastly we have a look at Cindy's latest Fleur De Lis Tiger Eye. It's smaller than you might think (less than 12 inches wide) and the pieces are awfully tiny but her work is impeccable. You can see that she has it all ground and ready to be wrapped. This window will be out the door shortly. 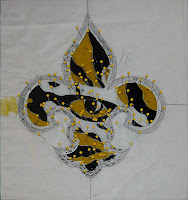 And that about sums it up for this week. With this Blog Post we are now 100% up to date and no longer one week behind schedule as we've been for about a month now. That means I won't be able to make many wonderfully accurate predictions such as, "This will certainly be done when she returns next week." In the past I've made those predictions only because I'd already seen the finished project and knew I was safe to mention it here. Now I guess all bets are off. :-)