We have four windows completed this week and they're all beautifully made.  I've found it's best to allow students to work on projects that they've picked out rather than requiring them to pick a pattern from a pre-selected series.  The time involved doesn't seem like work when you're making something that your heart is into.

That said, Susan's Geaux LSU window is quite the accomplishment.  The design incorporates plenty of thin, delicate pieces that are hard to cut and just as difficult to grind and wrap as well.  But Susan made this pattern look easy by finishing it not only quickly but accurately--  There's not a piece out of place.  I just wish the background glass photographed better as there's more of a greenish cast throughout it in when you see this window in person. 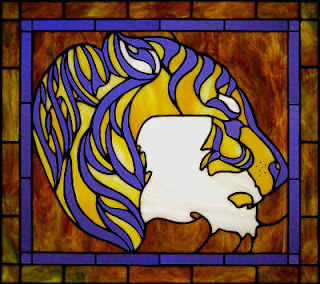 Lynn wasn't going to let Susan steal the spot light this week though.  Look at this stunning door insert Lynn made for her husband who you might have guessed is a Veterinarian.  It's a good 3 foot tall and filled with bevels that sparkle like diamonds when the sunlight hits it.  She made this window in ten separate stages (2 doves, 4 corner pieces, the Staff of Aesculapius oval, the smaller oval 'G' section, the background, and then the borders).  Once they were completed she just soldered it all together and came up with this!  I can guarantee that this will certainly get a lot of compliments when it's installed. 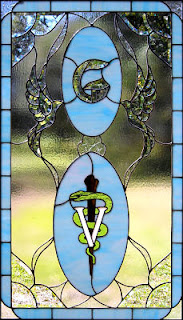 Martha has completed the third and final piece of her latest project.  As you may recall she had two other versions of this window finished last week.  It didn't take long to wrap up the work on this last one so she's already got a pattern designed for her son based on the Louisiana State Trooper badge.  We'll see just how that looks in our next update. 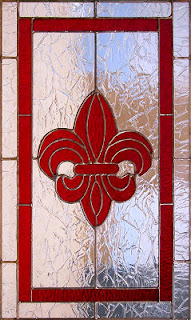 Terry's Alabama Crimson Tide window is not only stunning but a great example of contrast.  The alternating black and white parallelograms (yes, I had to look that up) are offset beautifully by the deep blood red letter 'A' that cuts into the center of the pattern.  The same red then borders the window making this hard to miss when it's lit up with sunlight. 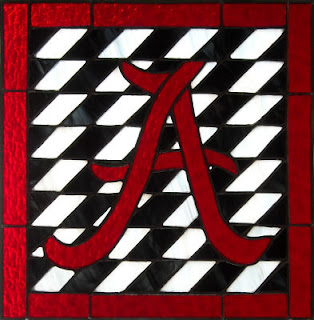 Bonnie's window is moving along just as quickly as I suspected it would.  I had said that once the flowers and birds were ground and wrapped the rest would be easy.  Even Bonnie was amazed at how quickly things progressed this week.   She tacked together her wrapped pieces and then laid everything out on one sheet of Clear Glue Chip glass.  The pattern was about 2 inches longer than the sheet of glass so we just left the bottom row of pieces off and will fill them in when everything you see here is tacked together.  Bonnie has all but 4 pieces of the background cut and more than half of this window ground already!

Ann has completed all of the grinding on her first Geometric window.  She'll begin grinding her second one when she returns next week but since they're identical you won't see much of a difference  between this picture and the one we take for the next update.  In fact, it might even look like she's moving backwards in time when you see that it mostly un-ground!

Brenda worked on her soccer ball window and got it all ground and tacked together.  From there  she added the four pieces that form her background.  I think this will just need a border attached to it next week and then she'll be able to solder this project.  She's leaning towards 2 different colors in the border. 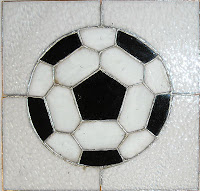 Shelley made great strides with her Twister the Cat window.  She got all of her border wrapped and attached during class and then began soldering this beast.  :-)  Russ has noticed a SMALL problem that we will easily fix next week.  Can anyone spot what it might be?  We'll reveal the answer when it's finished in our next Blog update. 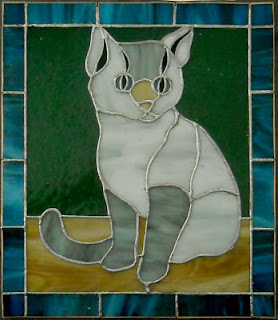 Donna was back in this week and finished cutting the branches and the leaves in her window.  She even started grinding her work so that we can simply lay this on a piece of her background glass and get it to fit the same way that Bonnie did with hers this week.  I really like this design and can't wait until you can see it without a dirty white piece of paper behind it.

Jane is making excellent progress on her window.  Now that the water is all cut out she'll move on to the leaves and the irises when she comes back in. After all these pieces are ground and wrapped she'll start working on the sky behind the trees.  It's hard to see what this looks like right now but trust me when I say that it's really taking shape.  This will be VERY apparent when it's ground and fits together better.

Tim had said that he might want to go with an Angel design for his first full sized window and that's exactly what he started this week.  We found a nice design on the internet and then we added some more cuts to the Angel's gown and wings (the original design was over simplified in my opinion) what you see here is the beginning of a great stained glass Angel Window.

Patty has resigned herself to becoming the MPDA* queen.  This week she got five of them assembled and 4 of them completely soldered.  The design has changed slightly from last week's trial run so that it now it holds an iPhone in landscape mode perfectly.  These still need the decorative back pieces that fit inside the curved back but they are about as close to being finished as an MPDA* could be.

It was a fun week this time around.  Hopefully next week we'll see even more finished projects!

Posted by Bayou Salé GlassWorks at 12:13 AM