Patty was back in this week after taking 2 weeks off to attend a wedding out of state.  It sounds like she had a great time visiting with family along with her sister and fellow student Sonia.  When she came back in this week for class she had a pattern and a plan.  She had found a card holder design online and wanted to make it with one slight modification-- she wanted it to hold post-it notes rather than business cards.  We measured a post-it, added a a little to the depth of the box and ended up with what you see below.  After it was finished Patty discovered that it makes a wonderful iPhone holder as well since the phone fits in the box in both portrait mode or landscape mode (horizontally) behind the front lip in case she wants to watch a Netflix movie on it.  Patty now calls this her "Multi-Purpose-Desk-Accessory" and I think that's now a permanent name for this project from here on out. 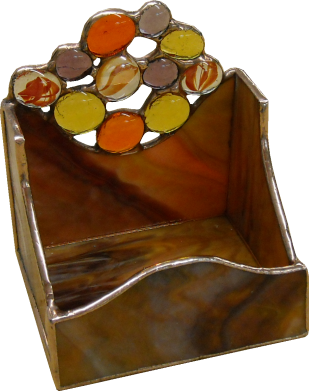 Myrt's Hummingbird and Morning Glory Window is officially complete and she's as happy as can be.  Myrt thought her soldering on this window was better than normal and I'd have to agree with her.  I only made spot adjustments on this to smooth out the few rough areas that we found before washing all the chemicals off of it.  This is another job well done for Myrt. 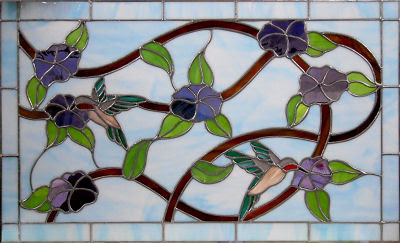 So when Myrt finished up her Hummingbird window she decided to start working on her Hot Air Balloon design.  She's cutting out all of the balloons and tacking them together before cutting out any of her background pieces.  Cheryl made this window a while back and said that it was one of the most enjoyable projects she ever made.  I have a sneaking suspicion that Myrt will feel the same way about it. 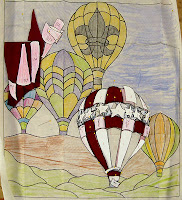 Martha now has all of her borders cut and ground for her 3 Fancy Fleaur De Lis Windows which means that she'll certainly be soldering these when she returns to class next week.  In fact, I would be completely shocked if at least one of these Fleur De Lis' isn't completed before her next class ends.

Lynn has begun soldering her window and it looks GREAT!   This is the first time anyone has made corners like these and I think we may be seeing the idea used again.  It was a simple-to-do effect that adds some style without looking overdone.  The only thing this needs other than solder is some channel surrounding it and I promised I'd do that for her outside of class so she wouldn't have to waste time on such a menial task.

Brenda is making some serious progress on her first window.  As you may recall from last week her center was already cut and when she brought it back in she had it ground and wrapped as well.  So she set off tacking it together and then started working on her background glass.  Once that was cut she moved on to the surrounding border.  As you can see she's got it all cut out now.  Brenda will be soldering this before we know it!

Cindy's done a redraw of her Zebra Hand Mirror pattern and it involved joining 2 pieces into 1 which makes this version of her mirror MUCH easier to make.   The original pattern had a total of 36 pieces in it while this one has less than 20.  The zebra design is still apparent so I say it's a change for the better.  I also expect that we'll see this completed real soon.

Sonia made her return to class this week along with Patty and has completed cutting the glass in her Charlie Brown window.  With that out of the way she stepped up to the grinder and started in the lower left corner to make sure everything fits in place.  You know, it was Sonia's idea to add the setting sun to this pattern and it really looks to me as if it belongs there.  It gives these Peanuts a reason to be sitting there staring off into the distance.  Talk about a peaceful window.

And the glass for Susan's Louisiana Tiger Window is 100 percent officially cut.  With the center of this already soldered I'd say that Susan is well on her way to finishing this project.  Her attention to detail has really made this window stand out and I can't wait to see this with some light behind it. Sadly, she won't be in next week so we're going to have to wait an extra 7 days to seer this completed. 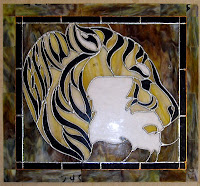 Jane is one of our 2 new students that started this week and she's already taken stained glass classes before so we decided not to bother making a butterfly.  Jane has picked this intricate Egret pattern to be her first window.  She wants to learn some of the tricks of the trade when making stained glass and she's picked the perfect pattern to get a good demonstration of all the things I do when making a window like this.  She has the tops of her trees cut and next week we'll see far more cut glass on this pattern.

Donna is our second new student and like Jane she has also made a stained glass window or two before coming to us.  She's decided to make this Bluejay and Flowers design and has already gone against the grain (so to speak) but using glass globs for the flower centers rather than a flat pice of stained glass.  It may not seem like much but it's a small element that will make this window stand out even more when it's completed.

Roxie has 2 more hummingbirds cut out and either 2 or 3 more traced out onto glass.  I suspect that Roxie will be sentenced to doing some grinder time next week even though, as you can see, these suncatchers  are fitting together wonderfully already.   The grinder is your friend and can fix almost anything but there's a price to pay for that help and that price is extra time.  Making sure that you cut the lines off of the glass while you are cutting ensures that you won't have to spend extra time at the grinder.  And Roxie's work is proof of that. 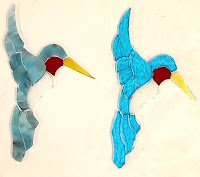 Now look at this.  Now that it's almost completely ground Shelley's Cat window looks great!   And to think that she was worried about how this one was turning out.  We're still undecided if she's going to add the name TWISTER to the bottom of it but either way it's going to be a very nice window made in tribute to a cat that is very much missed. Her sister will be proud to hang this stained glass piece. 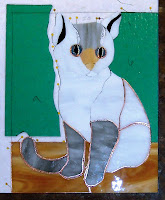 Terry actually completed a window this week but we aren't going to get a look at it until our next post because  I still haven't found the time to put the channel on it, wash it and take a picture. That said, Terry also began working on this Scarlet Letter window.  Could it be an Alabama Crimson Tide Logo?  I think maybe it is and I promise to find out for sure when Terry returns. 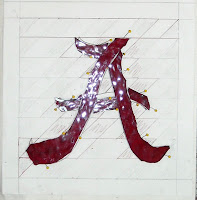 So be sure to come back to our blog to read the next update and see Terry's last completed project (as well as any others).  I'll make sure to get a pictures of everything.  And as a bonus we'll get to see Terry's window in the sunlight which is a luxury that we don't always have with the projects completed in out night classes.

See you all soon!