Once, Twice, Three Times A Zebra

OK, there's a lot to see this week and this post is late already due to the installation of another Church Window so let's get right into it and see all that's been accomplished.

We're going to start off looking at two of the three Fleur De Lis windows that Martha managed to complete this week. She started off making three fleur de lis' -- two in red glass and one in an amber/brown combination.  After they were ground and tacked together she picked three different glasses to use for her backgrounds. Due to the size of the glass she selected she had to alter the completed size of her windows.  The two below show how simple it is to change the size of a window and how dramatically it can effect the outcome.  She has one more left to go and I'm sure we'll see that one completed in out next post. 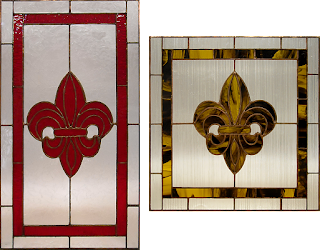 Terry finished her window and I have no idea what to call it other than her Soap Window since the pattern came from a soap container!  Wherever it may have come from you have to agree that this is one sweet window.   Her elaborate border doesn't steal any attention away from the main design at all, in fact it helps draw your eye to the intricate center pattern.  Terry did an excellent job with this window and it certainly is apparent in the finished picture. Can we all agree that it's a very clean design??  ;-) 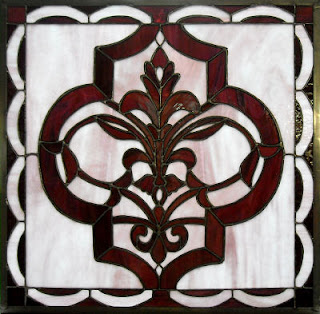 What we're looking at here are not 1, not 2 but 3 of Cindy's Zebra Mirrors.  Look closely and you'll see that the two on either end match but that the center one has been somewhat simplified.  Some might say that the center version is less appealing but I can guarantee that it's far sturdier than the others.  And let's face it, they all look great! 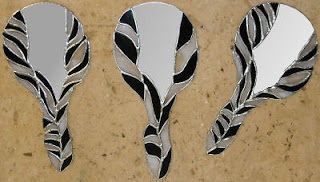 Brenda has her first window under her belt now.  She worked on it at home as well as in class and when your sister is Terry you know you're not going to have to worry about being steered wrong while working on your first window away from class.  Brenda's project shows us that Terry had best beware because Brenda may just give her a run for her stained glass money.  LOL! 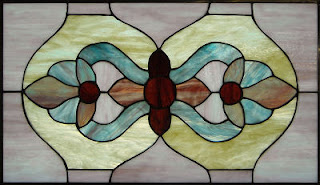 What's this?  A standard butterfly?  Well that means that Tim has started classes this week and he completed his first project.  I always say that I can tell within the first few cuts (of glass, not flesh!) how a person will do in their following classes and I can safely say that Tim will have no problems at all making stained glass.  He's leaning towards doing something with an Angel design but we'll know for sure when he comes back in and starts working on his first 'real' window. 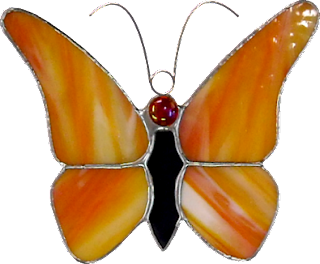 Terry not only finished her soap window but she also resumed work on the Alabama Crimson Tide window that she started last week.  If you recall, she had red letter 'A' cut out.  As you can see she's got all of her background cut and ground.  And she even has about half of it wrapped already.  Look out Brenda, Terry doesn't like competition! 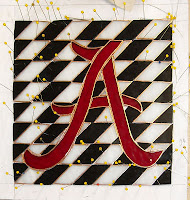 Brenda (who if you haven't guessed by now is Terry's sister) didn't want Terry to be the only person working on 2 projects during class this week so she not only finished her first window but started cutting out this soccer ball as well.  All of the ball is cut and I honestly don't know if this is a suncatcher or a window so I will be just as surprised as everyone else when I see what this looks like when it returns next week.  These women are stained glass work horses! 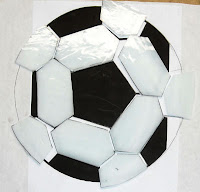 Cindy also worked on a second project.  She decided to make a few stained glass frames to use for gifts during the coming Holidays.  This one is about ready to go but she's decided that she will add a small stained glass flower to add a little something to this basic frame design.  When she has the flower finished will tack it on the bottom right of the frame to give it a little more color. 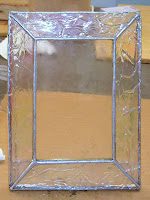 Ann was back this week and she's resumed grinding all of the tiny, complex pieces that make up her geometric design.  She has the right frame of mind for a window like this though-- you take it one piece at a time and before you know it you'll have a completed window.  This is the first of 2 identical windows so expect to see her start grinding the second one as soon as this one is bagged and ready to be wrapped.

And Bonnie's Hummingbirds and  Flowers window is really springing into shape.  She began wrapping all of the glass she had ground when she was in 2 weeks ago.  Now you can see each of the flower petals rather than a blob of red glass.  The pieces are thin and curvy which give this window a distinctly elegant feel about it.  I may try to talk Bonnie into a second border on this if the window it's being made for can handle the extra width and length.

Jane cut out the background brush of her Egret window out VERY quickly and then I talked her into cutting out the egret itself.  With that out of the way the rest of this window should be fairly simple.  The egret had a lot of small pieces in it but Jane just set her mind to it and got it all cut out before calling it a night.  While making a window I focus on the task at hand rather than the big picture.  It stops a project from becoming daunting and makes it much more manageable.

With the front of her Door Window Insert completely soldered Lynn turned her window over and began soldering the back side. With a good quarter of it soldered I'd say that it's safe to assume that we'll see this window completed next week.  It's a large one so we'll be washing it off outside with the hose but that just makes the cleanup process go that much quicker. It will be nice to see this window up in the air all cleaned up with some light behind it.

Myrt may not be full of hot air but her balloons sure are.  She's got her first balloon completely cut out and her stars and stripes balloon just needs the stars cut out before that one is finished as well..  Once the balloons are all cut out this window will become extremely easy to complete since the landscape and sky are simple cuts. 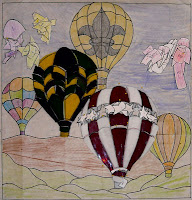 Patty liked her Multi-Purpose-Desk-Accessory so much that she's cut out 4 or 5 more of them this week.  Three of them are already ground and she'll work on the rest of them when she returns on Thursday night.  I also believe that I heard Bonnie ask if she could use that pattern later on down the road...

Roxie is also working on multiple iterations of the same pattern.  She cut out 4 more Hummingbirds (but I only have a picture of one of them.)  She also ground one or two of them and brought them home with her so she could come back in with  them all wrapped and ready for soldering. 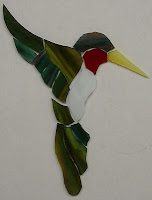 Twister the cat is now a very recognizable kitty.  So recognizable, in fact, that Shelley has decided not to personalize this window by including Twister's name in the bottom border.  I never thought it would be necessary but I didn't think it would detract from the window either so we all left it up to Shelley in the end.  Now that everything is cut Shelley will most likely begin soldering this when she returns to class. 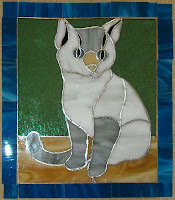 Charlie Brown-- Little Known Facts.  Surely you know that Snoopy is a beagle but did you ever wonder why Snoopy is colored black and white when real beagles are usually black, brown and white?  Well it turns out that Charles M. Schulz was color blind and honestly thought all beagles were only black and white.  Snoopy may be black and white in Sonia's window but the rest is certainly colorful enough.  She has a lot of this window ground now and will most likely be ready to wrap these pieces before she leaves class next week.

So there you have it--  a few finished windows, more windows that are still in the works and a little Charlie Brown trivia to tie things up in the end. Not a bad week at all.

Posted by Bayou Salé GlassWorks at 10:52 AM